That is a real possibility -- that it was an "inch" other than the one we know and love.

You know, there are other items to think about, like the brass section of bands. Plenty of different size tubing and mouth pieces that come off of horns, tubas, etc...
Maybe someone got tired of blowing through theirs, and started looking through them.

Telescope making has been around since the Spanish conquistadors.. The military wanted spy glass telescopes on their ships to see what flags were flying on the high seas, an early friend or foe device.
Glass blowers use metal tubes to blow glass, and that has been around since ancient Egypt and Greece.

Someone could make career out of tracing back the history of telescopes, to various manufacturers, like the clock makers of the day back in the 1800's...
The Industrial revolution exploded with Railways, and steam powered everything. It really was a steam punk era!

P.S. Measurements were taken off of the feet of kings, in the early days of serfdom, every country had their own standard of measurements for this reason. Just like language and money, and laws....
Royalty set the standard for which all their subjects followed.

*Drawing tube via drawplates (mandrels & collars) is older than "cold extrusion" tube production & almost certainly the progenitor of early eyepieces made alongside the rest of the components in nearly all old telescopes/manufacturing firms: this would include the ep barrels & spacers etc along with their lenses also...

Dependant upon the mandrels & drawplates/collars which were custom-made, it is no wonder that many sizes evolved...the "Scientific Instrument Society" bulletin lists a Cassegrain/Gregorian by "J. VAN DER BILDT

My take after wading through "reams of screens" (pardon my alliteration

) is that somewhere, someone or firm, gained a strong marketing foothold with their particular product, particularly their eyepieces & barrel sizing (which they would obviously standardise for cost etc) & this became an "industry standard" just as others "industry standards" were & are commonly adopted in manifold products.

I also strongly suspect that this would have preceded extruded tubing for ep barrels for the simple reason that sizing & subsequent machining/lathing was not only much later (technologically-speaking) but would have inevitably followed the drawn-tubing techniques of which the old film in the youtube video shows an example of a marvellous artisan using old equipment to create high-quality ota's...which compared to ep barrels is only a difference in scale: casting barrels & machining them would be extremely unlikely imo btw.

Unless a "smoking gun" can be evinced I think this theory is as good as anything else being posited imho - but any further investigations will not include myself as I have more important things to pursue..!

The old film in the video took me back to my own jeweller's days where - besides using commercial tools for wire & tubing - I constructed hinged drawplates made from hardwood blocks to pull woven chains & endless bracelets into standardised, tight weaves such as in the top image in the "ART GALLERY" page of our website link in my signature...

There is even an officially defined "metric inch" that is .4 mm shorter than an Imperial inch.

That is a real possibility -- that it was an "inch" other than the one we know and love.

The cylindrical punch cutters are then replaced.

Don't know if this helps.

"Did the telescope eyepiece come from wine cork cutters? " nurse Mendy is wondering. 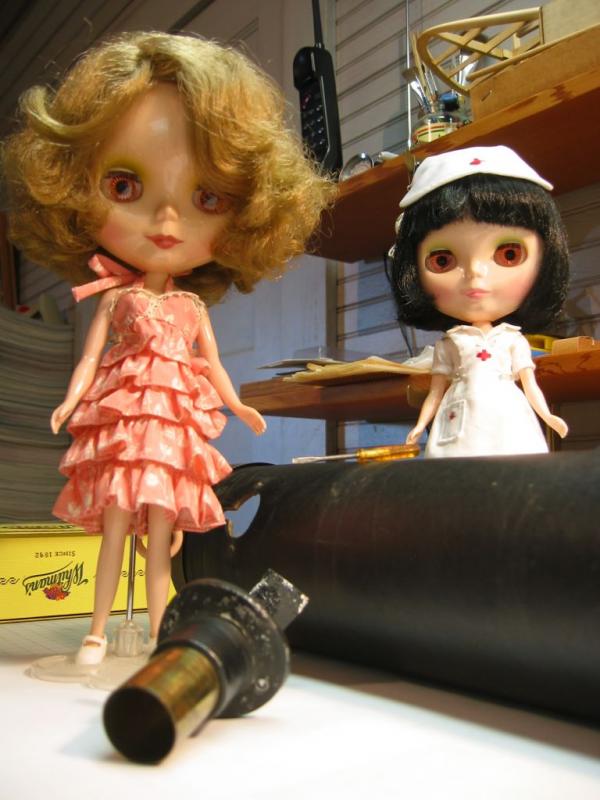 The cylindrical punch cutters are then replaced.

Don't know if this helps.

"Did the telescope eyepiece come from wine cork cutters? " nurse Mendy is wondering.

Sure does help Robert! It remind me that this problem will only be solved after a good bottle or Merlot!

So maybe a red herring.

I throw out another guess based on optics. Eyepieces comes in a range of focal lengths. The magnification and field of view are determined by  the focal length,  and the configuration of those lenses. One of the properties of the configuration is the diameter of the lens. Your  not going to make a low  power wide field eyepiece with small diameter lenses. So the 24.5mm barrel size might have been chosen to allow for lenses  of the correct focal length and diameter to allow the for the lowest power widest field of view  eyepiece that was  chosen for that time.

If you use the full moon which is 0.5° in diameter as a standard as the object you wish to completely view in an eyepiece  and  then look  at the focal length for  a typical refractor being produced at the time when the 24.5mm eyepiece started to show up, what diameter and focal length lens does one need to produce a field of view to 0.5° or more.

what diameter and focal length lens does one need to produce a field of view to 0.5° or more.

You are probably better qualified to answer that than most here