Skywatcher ED100 not good for polar alignment on goto mount?

Can the the Skywatcher Evostar 100mm perform an acceptable polar alignment using a GoTo mount?

I read in a very excellent review of this telescope OTA (http://scopeviews.co.uk/SW100EDPro.htm) that on a GoTo mount (I'm using an AVX) the Evostar 100 is not "orthogonal enough to get good pointing accuracy and certainly not enough to align the mount." The reviewer defined his terms: "Orthogonality is the extent to which the optical axis of the scope aligns with its physical axis and varies with position and focuser etc. Generally only scopes with CNC’d tubes, rings and focuser are highly orthogonal."

How serious an issue is this, for this scope in particular (which I am planning to purchase)? My application will be astrophotography with and APS-C DSLR.

Makes no sense to me at all. I watched another club member use his SW ED100 f9 scope on an AVX for years with great success.

Makes no sense to me at all. I watched another club member use his SW ED100 f9 scope on an AVX for years with great success.

I don't understand this as well, but each to their own. I have no trouble aligning the SW 100mm ed atop Orion's SkyView Pro mount. I can even do a three star alignment without seeing if the three stars are actually in view and get the alignment to come out okay. I always thought alignment was the responsibility of the mount sans scope.

Suppose no it cannot. The scope can point one place and the mount another. When you polar align a mount the mout RA axis remains unchanged for the whole session whereas you move to scope around the sky.

You can polar align a moiunt without the scope being attached so any nornal visual scope is somewhat irrelevant to polar alignment.

There may be methods available that can use a visual scope but unless you can guarantee the scope and the RA axis are parallel then a visual scope is not a great idea.

I tend to consider that if a polar scope was unnecessary then they wouldn't make an equitorial with the machined "tube" and make polar scopes. It all adds to the cost. Also Eq mounts have been around for many years, someone 50 to 100 years ago would have already thought of it.

Anectotally, I purchased an f/9 ED100 orion from an imager who made beautiful images.

He was moving to a larger scope.

Could what you are talking about be fixed with the cone adjustments screws on the dovetail plate?

Suppose no it cannot. The scope can point one place and the mount another. When you polar align a mount the mout RA axis remains unchanged for the whole session whereas you move to scope around the sky.

I think that is the point being made by the reviewer whom I cited.

If you do the AVX polar alignment (after a 2 + 3 calibration alignment) using a star that is high in the sky and near the meridian (as recommended by Celestron), the OTA is pointing nearly vertical so the optical axis and the physical axis of the tube are in close alignment. (The physical axis of the OTA is always exactly parallel to the direction of the dovetail bar that fixes the OTA to the mount.) In this nearly vertical orientation the gravitational forces on every segment along the length of the tube are pretty much parallel with the physical axis of the tube. In other words, the OTA is essentially perfectly straight. However, when you then tell the scope to slew to a star that is, say, near the eastern (or western) horizon, the OTA is closer to being horizontal and the gravitational forces distributed along it are not parallel with the physical axis (dovetail bar) and there will result a moment along the tube, causing some flexure. The mount itself will be pointing directly to the star, and the dovetail bar holding the OTA will also be "pointing" directly to the star (the rigidity of the dovetail prevents any flexure). So the center section of the OTA is stays aligned but the two ends of the OTA are skewed off that physical axis.

The result is that the image produced at the eyepiece will be in a slightly different position in the viewing field (i.e., it will not be centered) even though the direction of the mount itself (and the direction of the dovetail bar) is in fact pointing right at the star. If you were then to "recalibrate" on that new star you would completely confuse the calibration algorithm in the AVX. Even if you did not recalibrate, there are two lingering concerns that I have:

1. If I am trying to image a dim Messier object that I cannot "see" in the viewfinder of my DSLR, I first focus on a bright star that is easy to see in the viewfinder of the camera. Then, I tell the AVX mount to "goto" the object. If my polar alignment is good, the OTA should end up pointing to the desired destination with the object centered in the sensor field of the camera. But, if the OTA has "flexed" as described above, the mount will correctly point to the object but the object will not be centered in the visual field.

2. A more serious problem is the production of star trails for longer exposures due to the fact that while the RA movement of the mount itself is quite correct, the gradually changing flexure of the OTA (due to changing gravitational forces along its length) will make the stars in the field of view "move".

I just don't know how serious a problem this will be. I guess I will just have to try it out.

I think the point is that the angle between the optical axis and the physical axis changes as the OTA is slewed to different positions of the sky during an observing session. You can't fix a changing effect with a "permanent" shim. See my post in response to sg6 below.

A very good article, pretty much the only thing I disagree with is the quote the OP posted...I think that is bilge. For years I have routinely aligned my mount viewing through the SW 100ED OTA with a  12mm reticle EP and have achieved very good results. The scope can be slewed around the sky after a good three star alignment and targets will be squarely in the field of a 19mm Panoptic EP. A properly aligned mount will keep the target in the FOV for hours if done properly. So I guess I just don't get the boggle... 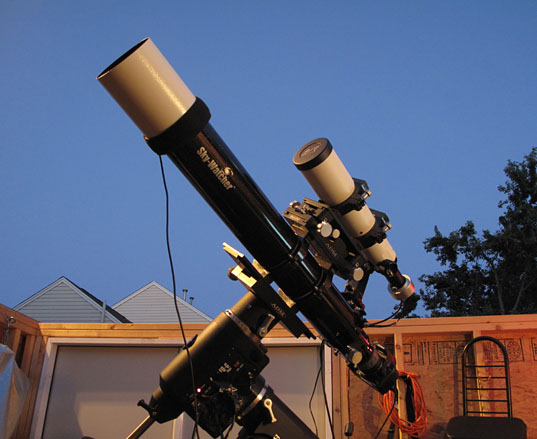 Thanks, everyone, for your answers. Particularly those of you who have used the SW 100ED without problems. It appears that the reviewer I quoted is quite mistaken based on your experiences, even if the underlying physics of the situation he alludes to are correct (and, I believe they are correct, as I explained above). However, the real issue for me all along was, physics aside, whether the effects were noticeable. From what you all have said, the effects, if any, are not noticeable. So, I will go ahead and get the scope.

Have fun with your equipment, that is an excellent scope.

Could the reviewer be referring to the use of the OTA as a polar alignment scope? In that case, lack of orthogonality could be an issue.

I think that is the point being made by the reviewer whom I cited.

I just don't know how serious a problem this will be. I guess I will just have to try it out.

There is always flexure with any scope and yes it is variable.  Three stars alone are never enough (the calibration stars of the AVX hand controller get averaged to one "star").  A better alignment routine can model the flexure better.  The AVX hand controller puts double stars near the middle of the FOV of a 3-6 Nagler at the 900mm of the SW120.  That's about 10' of accuracy (remember to use JNow as the input RA/Dec instead of J2000.0).  You can get the hand controller to better account for the flexure in that part of the sky by aligning on a nearby star.  You can also use the precise goto feature, which does a local sync to get the offset.  They both do fine.  With #1 above, use that nearby star you focus on as the precise goto starting point.  It's surprisingly good.  With #2, at long exposures, a flexing tube will be the least of your problems with an AVX!  A few minutes with an autoguider is the practical subexposure limit at the 900mm of the SW100.  That's not much motion at all.

With the AVX, try CPWI.  You can use many more stars and directly model the flexure.  You can also see the model terms.  Five stars is usually enough for me with CPWI to put things near the middle of the 30' of my camera.