WiFi at home but What about in the field?

I can remotely operate my Nexstar 6SE at home because I can use my WiFi from the house to control my telescope via an HP laptop Dummy terminal. What do I do when I am out in the field away from my home  WiFi?

Is there an alternative to controlling the scope and camera on my mini computer out in the middle of nowhere?

I have both the onboard Dual Band WiFi on the mini computer and a USB 3.0 WiFi antenna as well. I have WiFi 1 and WiFi 2.

How do I create a P2P network?

It's been a long time since I've set one up.  I just googled it.

I believe Windows 10 no longer uses Homegroup. Those links are outdated.

I have a micro USB powered WiFi router mounted next to my Intel NUC. Mini PC (via ethernet cable) and iPad (over WiFi) connects to this router and then I can remote in to Mini PC.

This is the model I have !

I use a small mini router on the telescope computer to generate it's own WiFi network (no internet).

I use a GL.iNet Gl-AR300M with external antennas. This one is is nice because:


For even more range I use a USB WiFi dongle with an external antenna plugged into the remote terminal PC/laptop/tablet. I replace its antenna with another high gain antenna. This way the long range communication happens through a pair of high gain antennas, instead of relying on the anemic internal antenna in most PC devices. 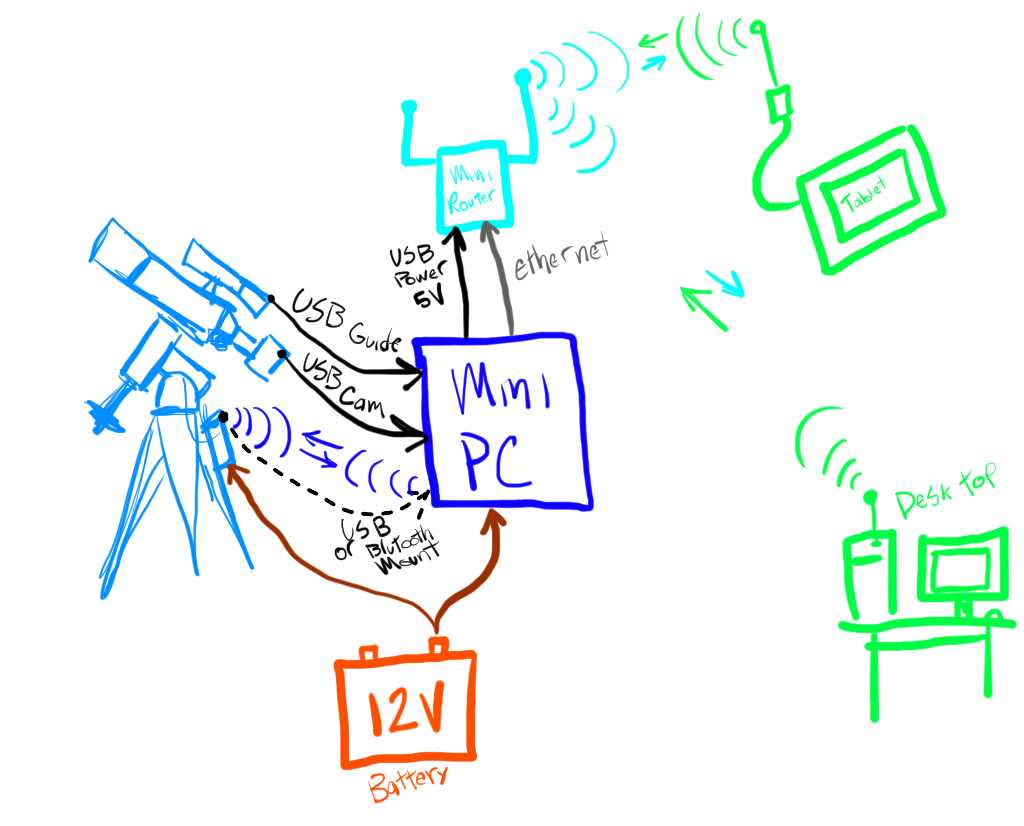 I use it like this regardless of whether I am at home or in the field, it boots up with the computer and it is very reliable.

Having a universal system like this also adds ease of mind. There is no reconfiguration needed to adapt to a use case or environment, so there is nothing to forget or no mistakes to be made that could spoil a night.

Same here, a nano WiFi router powered by the scope-side computer. Ad-hoc networks can be hard to setup and Win10 doesn’t make it easy (on the contrary)

I also am using a GL.iNet GL-AR750S-Ext Gigabit Travel AC Router (Slate) but in router mode.
Switching the WAN port to LAN means I can plug the mount and NUC in via Ethernet and access them wireless or through a third Ethernet cable.  Windows Remote Desktop will operate either way.

The GL.iNet Gl-AR300M cmooney91 is using is the better option since it can be run with a high gain directional antenna for potentially improved wifi reach.

The AR300M should also consume less than half the power since it is only 2.4GHz 300Mbps, it has no second 5.8GHz radio. This is nice for running off of a battery in the field, when every Watt counts.

The 2.4GHz signal attenuates much less than 5.8GHz, so it penetrates  walls, floors, and trees  much better, leading to a longer effective range. The high gain antennas compound the effect.

300Mbps should be more than enough for 4k  remote desktop.  A Netflix movie quality 4K@30Hz stream only takes  about 25Mbps. Windows RDP should be a lot less demanding than that since it only sends screen elements that have changed/updated instead of the full fame 30 times a second.

If you are having issues with 2.4GHz signal congestion in an urban environment, the external antennas can be switched out for a pair of "circular polarized antennas", which should reject most of the other signals.

The extra Ethernet port on the AR750 looks really handy. Is it possible to disable the 5.8GHz radio if not in use?

Well, for the life of me, I could not figure out how to configure for a wireless P2P connection between laptop and mini computer without a LAN. I did, however, figure out how to connect via Ethernet CAT6 cable instead. I have a 50 foot Ethernet cable that I connected between my laptop and mini computer, which will enable me to sit in my SUV with the laptop and run the telescope outside via Ethernet cable from the mini computer to the laptop. That will save me from the biting cold on those clear dark winter nights when I want to image, but don't want to sit outside next to my telescope with the camera wired to my laptop.

A constructive thought from my experience of outdoor sports broadcasting where some cameras (typically 24v) might be remote from mains electricity power so we couldn't simply plug in mains electricty adapters. This situation is not dissimilar where a laptop demands 19 volts.

I would often use a 12v 18ah GEL mobility scooter battery connected to a 12v/240v 300 watt DC/AC inverter (12v/110v in the USA). That option allowed me to embrace regular power 'bricks' (for 19v laptop) as I had my own (equivalent) mains electricity supply in the field. You can get higher wattage inverters. Mobile home owners often do something similar to run Tv's.

This route not only permitted me to embrace full mains voltage devices (240v in UK), it also allowed me to embrace Power over Ethernet (POE) devices. I simply plugged in a 24v POE converter for (POE)  camera and 18v converter for (POE) point to point wireless. POE is great as data and power flow down a single cable. This is hence a neat way of distributing different voltages to various devices from a single compact power source.

Frankly, I am a tad surprised that POE has never featured in the astronomy camera market as one less cable would be great. But these thoughts about alternative power options at remote locations might inspire the innovators out there.....

Both wireless radios on the GL.iNet GL-AR750S-Ext and be switched on/off independently.

Frankly, I am a tad surprised that POE has never featured in the astronomy camera market as one less cable would be great. But these thoughts about alternative power options at remote locations might inspire the innovators out there.....

There are security cameras that use POE to power them. Unfortunately virtually nobody uses security cameras as a basis for astronomy cameras anymore. Until the astronomy camera manufacturers move away from USB to Ethernet (either wired or WiFi) POE doesn't make any sense since it seems to be simpler and cheaper to use a separate 12v DC power connection (because of it's widespread availability at the telescope).

There are security cameras that use POE to power them. Unfortunately virtually nobody uses security cameras as a basis for astronomy cameras anymore. Until the astronomy camera manufacturers move away from USB to Ethernet (either wired or WiFi) POE doesn't make any sense since it seems to be simpler and cheaper to use a separate 12v DC power connection (because of it's widespread availability at the telescope).

Agreed Mark. Just surprised thst nobody has explored this given a single Ethernet cable will handle both data and power and is faster and much more reliable than USB.

For my outdoor sports video (Internet) broadcasts I use a £265 Sunba PTZ, H265, 1080p Internet Protocol POE 20x zoom CCTV camera and it offers TV quality. I have never considered aiming it skyward to see what I can capture. I might explore. Might be OK for (say) Lunar! But if my Atik Horizon was POE......

Noah, Oh I totally agree. It sure would be very nice to have choice of true astronomy oriented cameras with a native Ethernet connection that also supports POE. One simple, flexible, long, and cheap Cat5/6 cable between a PC and the camera ... so no need for distance extenders, second power cables, etc.

As long as the drivers also exist for generic ASCOM, and INDI connections as well as specific drivers for SharpCap, ZWO software (assuming ZWO hardware), and a few other EAA/image capture apps.

And if those drivers existed then a WiFi version of the cameras would be a nice option too.