Who made the mirrors for Orion's Deep Space Explorer

I built a 8in f6 dob around a mirrior set out of a 1995 Orion  Deep Space Explorer 8" f/6. It could be 1996. I found a few post on CN about a 10in Orion DSE stating that the scopes were made in the USA and the mirrors made by Terry Ostahowski. What info I have found on the scopes them self they had some short coming. Glued and taped mirror to the cell. Poor focuser, single stock none adjustable secondary.But came with a Ostahowski mirror? I can hope.

So you built your own scope around the mirror set?  Cool!  Were there any markings on the mirror that you noticed?  How about a star test?  Ultimately, the question is not "who made the mirror?" but "how good is it?"  or "how much do I enjoy using it?"

Discovery made the Orion Deep Space Explorers as well as the 11 inch and larger Celestron Starhoppers.  They were crude by todays standards.

Pirate Instruments was a partnership between Bill Larsen and Terry Ostahowski and later became Discovery Telescopes with Terry making the mirrors. 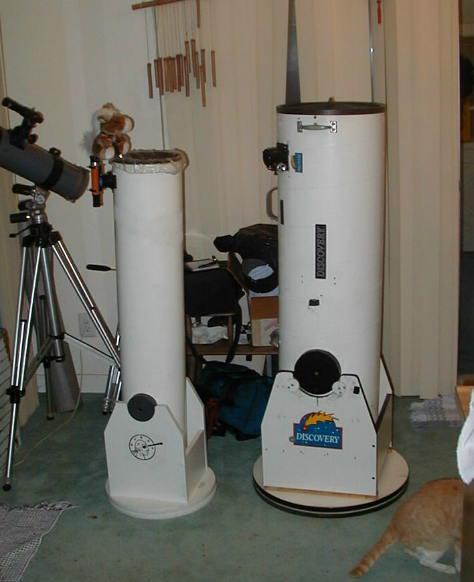 When using the Pirate Instruments scope, do you need to wear an eyepatch and have a parrot on your shoulder?

When using the Pirate Instruments scope, do you need to wear an eyepatch and have a parrot on your shoulder?

Only if you also have a bottle of rum in your hand.

Only if you also have a bottle of rum in your hand.

I had an 8 inch Orion Deep Space Explorer last century. The mirror was quite good, but the finder that came with the scope was just frustration squared, so I replaced it. Tube currents were a problem, I added a fan at the back. I also replaced the secondary stalk with a real spider. Made a solar filter out of a cake pan, cardboard, tape, filter film, and velcro. A great first scope. Sold it when we moved to a smaller space.

I have a circa 1998 (black tube) 6" Deep Space Explorer and I'll never part with it. The mirror is unbelievably sharp.

I have a circa 1998 (black tube) 6" Deep Space Explorer and I'll never part with it. The mirror is unbelievably sharp.

Yup. They're Terry O mirrors. Stands to reason they're excellent. I got the mirrors recoated a couple of years ago and I'm hoping to eventually build a new tube assembly and mount for the mirror. Mine's kinda dilapidated from undergoing so much extensive modding over the years. It was my first "serious" telescope, so it's been changed a hundred different ways over the years. Hoping to turn it into something of heirloom quality befitting the mirror. It'll also have some features to turn it into a real planet killer, because the thing soaks up magnification like a sponge. On steady nights I've had it around 400x like it was no big deal. Just stupid good. Might as well see if I can squeeze every drop of performance I can out of it and see what happens.

So I emailed Terry and ask him" Is it true Terry Ostahowski made the mirrors for the Orion Deep Space Explorer in the 1990s ? I have mirror from a DSE I used to make a dob around. That you so much for your time. Lon"  He wrote back "Not entirely true, Discovery Telescopes made the optics and the dob scopes for Orion in the mid to late 90's. I was part owner at that time. Terry" So Ive never gotten a straight answer to who made the mirrors for the Orion DSE. I though it was cool someone wrote me back from Ostahowski Opics.   PS My mirrors IMO works well. Still figuring  out the star test.