I have a Bresser/ES Mak 127 (bought it used).  Tries to use it on Sunday night (weather was partly cloudy - weather front had passed through the area) and the Mak was on a Porta II mount for at least an hour before using it (Mak is wrapped in Reflectix).  Had problems focusing it on Venus so I took a photo through the eyepiece with the camera on my S10.  Later on, brought it in and took a photo through the back of the scope with no eyepiece in - to me something looks out of alignment.  Had no problems with it previously, but it has not been used since Thanksgiving due to the weather and my work schedule.

Not familiar with how to do collimation with it and I'm debating if it would be worth it to send it to ES to have them look at it.  Any suggestions are welcomed 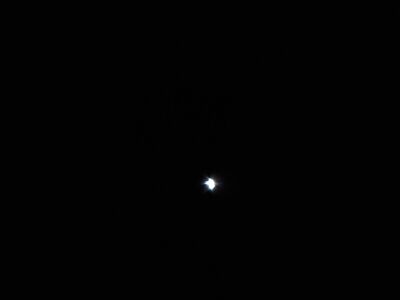 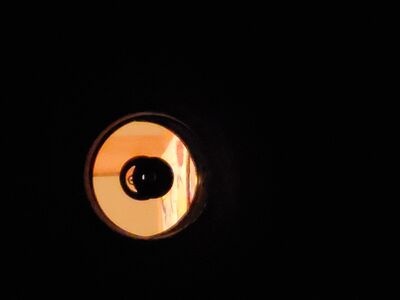 It is Hard to tell if your camera is off axis when you took the shot of the inside.

Can you run a star test?  Polaris is easiest because it does not move.

Venus is really hard on any telescope.  Do you have a colored planetary filter?

That may help too.

I was once using my ETX90 a year or two ago and heard a faint "pop" like sound and could feel it through the focuser knob.  Immediately I noticed the out of focus image looked off, no longer circular.  It looked very much like your pic.  I focused in and out all the way to see if it would reverse itself but it stayed that way.  I took the back off and there are 3 push and 3 pull screws to collimate the mirror.  I was able to get it back to normal within about 20 min by adjusting those a bit.  It's been collimated dead on for over a year now.  I do not know much about your particular mak, but I'm willing to bet if you can get to the collimation screws than you can tweak it back.

I thought I would describe the collimation process I went through.  I set the scope up on the mount inside and pointed it down the hall at a "fake star" I made (a flashlight with tin foil over it with a tiny pin point hole poked in it). Getting to the collimation screws involved taking the whole back off but it was quite easy on my ETX, only being like 2 or 3 screws.  Taking the back off also took off the visual back so I ended up taping a cheap eyepiece directly over the hole so I could assess collimation as I worked.  From there it was just a matter of very slightly adjusting the screws in order to make your out of focus pattern look like a nice perfect doughnut.  Then I would move it out of focus the other way and tweak on it a bit that way to make everything nice and round.  Repeat until it was perfect on both sides of focus.  Some advice though, loosen the push or pull screw before you tighten the opposite one so you don't pinch the optics.  Also, start by slightly loosening them all just barely to relieve any tension that might be pinching the optics... that alone could be the problem.

Edit:  Now that I read the post above I realize your pic is of Venus.  Venus has phases like the moon so it's actually hard to know for sure what your star pattern looks like when pointing at it.  If a bright star looks like that as well then it's a collimation issue.

The ES 127's are easier to collimate than the Meades because there are openings to access the collimation screws (three of them are covered by small rubber plugs.)  I explained how I collimated mine in the first post of the following thread:  link.  It arrived badly in need of collimation, but has held well since I got it set.

Thanks to all - and a special thanks to Matt at Cloud Break Optics in Seattle for walking me through it.

I spent an hour getting it almost back into collimation (just getting over a care of viral pneumonia and the temps here are hovering around freezing tonight).  Will try to get it dialed in tomorrow night .

Redbetter - I have your post bookmarked to look over in the morning, -  thanks!

CeeKay, it may be a blessing in disguise that you have to tweak your Mak, because you'll have that experience of mirror tweaking that is common to reflector owners but not so much for the Cass crowd.  Don't worry, you won't hurt it.  Clear skies, Mark