Returning to the Hobby: Argh

Long time member trying to get back into Astronomy after a long break.

I've had my XT10i out a few nights in the past few months after it's been sitting in the corner for the past ten years.  I bought the scope back in college stored it at home with my parents and did a bit of observing when I came back home to visit, but eventually abandoned the hobby when I graduated and moved from Bortle 4 skies to Bortle 8 skies.

But now I'm trying again and facing frustration after frustration.  First night out I checked my primary collimation, pointed the Dob at the Moon, a nice easy target and had no end of trouble landing solid focus.  I kept skipping back and forth due to focuser slop.  So I started reading through the forums about how to tune up the focuser and I got it tightened up.  While there I read a lot of posts on collimation and felt a bit better about my rusty skills.  Even picked up a laser collimator and tired the barlowed laser method.

A few days later I took it out again and picked the Orion nebula this time, an easy find but a harder target.  I found that even after my adjustments the focuser was all over the place, wobbling in the focuser.   That night every time I would refocus stars would look like differently shaped sonic the hedgehogs.  I used my collimation cap and the primary looked in alignment, but no clue on the secondary.  So to help alleviate my pain I bit the bullet and ordered a nice Moonlite CR2 and the full Catseye collimation kit.  Got the Moonlite a week ago and installation was a breeze, so that was a welcomed relief.  Had to wait a bit for the collimation kit to ship but got that yesterday.

I got the scope out and started going through the collimation instructions.  I pulled the secondary and checked the focuser mechanical alignment, made some small adjustments and was confident enough to put the secondary on and move on to that part of collimation.  At that point I realized since I had the primary off I should install some milk jug washers on the secondary and whipped those up.  I then put them on and tried the thread on the secondary when disaster struck.

I had the scope tilted up about 30° so I could keep things horizontal-ish, but still work from eye height and look down the tube.  I had thought I had the secondary threaded on a few turns and let go to re-position myself only to have the secondary bounce down the entire length of the scope hitting the primary and land resting on one of the mirror cell clips.  Luckily, it managed to land mirror side facing up so I was able to slide it slowly back out without pulling the mirror cell.

And the horrors kept coming.

The secondary was fairly dirty after it's tumble down a 16 year old scope, so I rinsed it off with tap water and blew off any excess water with my giotto air blaster and saw two small ~1/16" smudges where the secondary is scratched.  Not great, but not completely horrible.

At this point I'm considering pulling the mirror cell at this point to get a good look at the damage, but taking a moment and typing this post suggests I should just figure things out once the endorphins have gone down.

Some images of the damage: 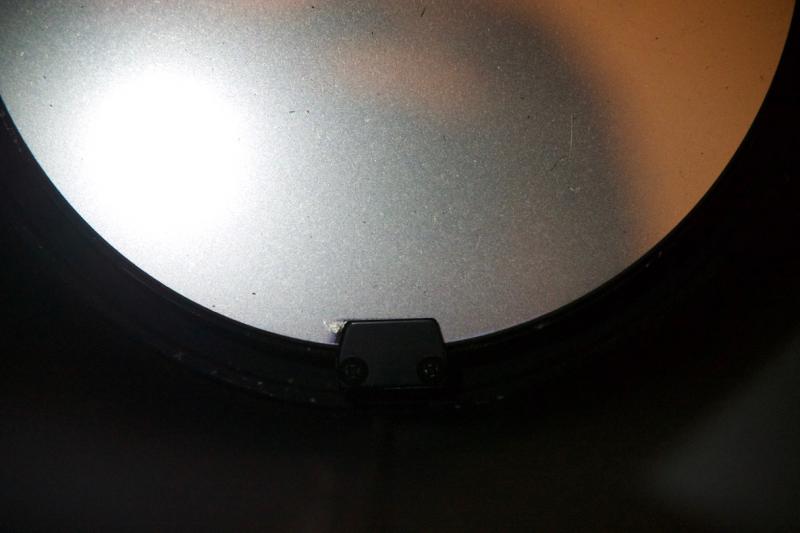 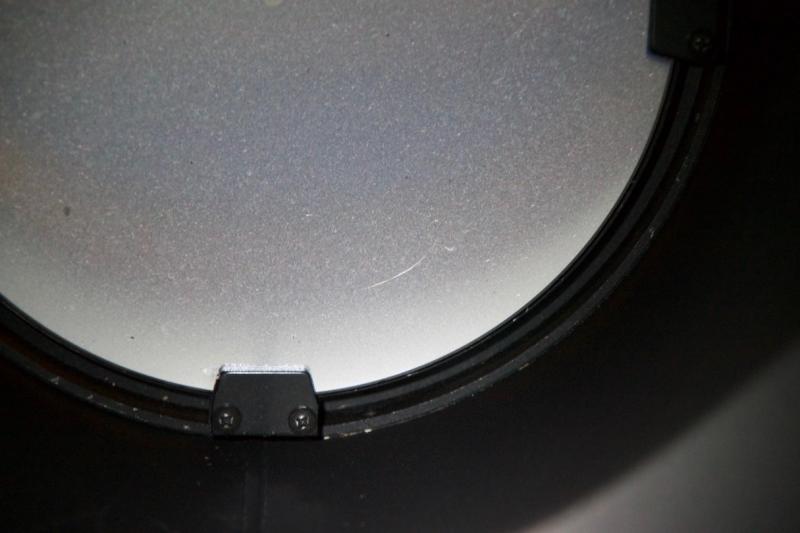 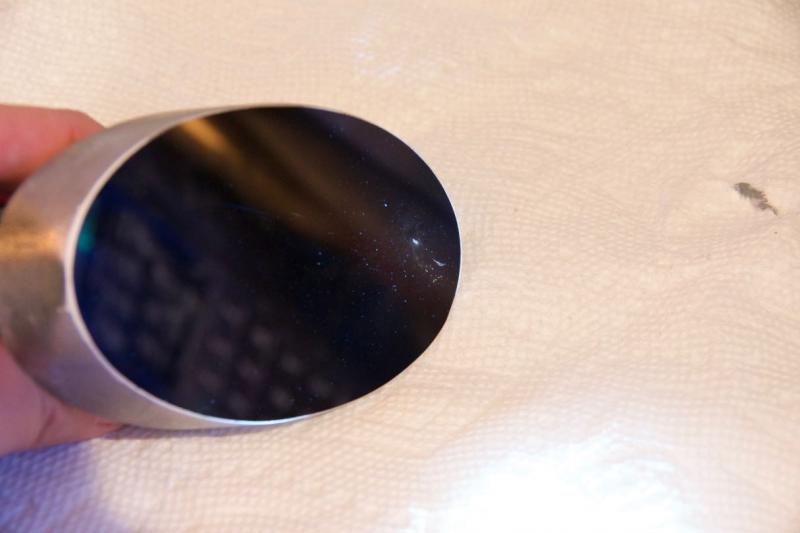 Don't stress it, those will not appreciably impact your views.

I've never scratched a mirror using the fingertip method of cleaning-- it's much easier to use very light pressure compared with the cotton ball cleaning method.

I do a final rinse with a jug of distilled water and air dry.

Thanks for the encouragement and links, Volvonium.  I took a moment and got the secondary back on and I'll pick up with aligning it later.

I initially had some apprehension that in the process of cleaning I might accidentally remove the factory center dot, but getting the Catseye template and hotspots gives me a reason to clean the primary.  First I wanted to try out the tools to get a feel for things, though.

I second that, theres no way those small scratches with affect the view at the eyepiece, in a noticeable way at least. I think once you give that primary (boy is it ever opaque!) a careful cleaning, you'll be off to the races again. Be careful not to over tighten the mirror clips, it may pinch the mirror.

XT10s have very durable coatings and the center dots are very tough to remove, so don't sweat it.  Just take your time to carefully clean and assemble.  I've dropped a secondary before doing something similar on one of my first scopes.  That scope, even with a little mar on the primary and its aged coatings, still gave me one of the best views of Jupiter I've ever seen in my life, in spite of now owning much larger scopes, with more expensive mirrors.  Once you get that scope back up, it'll be sure to wow.

Stellar1 has a good tip on not overtightening the mirror clips.  I've made that mistake before as well!

I may be way off, but just from what I am seeing, I think a good cleaning of the primary would resolve 95% of the issues.  Personally, other than my OCD amateur astronomer self, I wouldn't worry about those scuffs at all.

Michael Wren, please check your Personal Messenger, and pick up your mail.

Sorry for your rather rocky "re-entry" to the hobby. Like others, I believe you have done very little damage to either mirror. But after 16 years, a good careful cleaning of both is probably due. As you now know, any tinkering above an unprotected primary mirror must be done with extreme caution. Consider these "hard knock" lessons painful but not fatal. Acknowledge and move on, my friend!

I suggest cleaning the mirrors using the fingertip method, center spot the primary with your Catseye center spot, collimate and enjoy the views.

Probably no harm  done but even if the ding did cause harm it's within the clip width so just rotate the mirror so the ding is under the clip. The scratch is a heck of a lot smaller that the spider vanes so it wouldn't do much erosion of the quality.