Collimation...........  man, this was a mess.  I recently acquired a Meade 8" LX200 ACF SCT, my very first reflector telescope (and second telescope overall), and after one test run of imaging it was a little fuzzy.  So, I figured it would be useful to check and adjust collimation.  The eyepiece seemed pretty good, but I read somewhere that snugging down the screws to hold the mirror tightly was a good thing, as it'll hold collimation longer.  When I did that, ugh... I couldn't get that thing re-collimated for 3 hours!  And when I did, I had zero confidence it was even okay.

Fortunately, the awesome person who sold me this SCT also had acquired the Hotech Advanced CT Laser Collimator, and offered to let me borrow it.  Last night, I gave it a shot.

I couldn't find the reflected laser dots to save my life.  And when I had one of them, I had none of the others.  I messed with it until...  #$*@#($!  I had loosened one of the collimation screws too far and now it fell out.  AND, it wouldn't catch the threads again to screw back in!  I figured I would try pulling the mirror back using the remaining two screws, but another was already on the cusp of falling out and...  #**U$@)*(#$!!!!!!  Now I had two screws completely out of the secondary mirror...  yikes!

Fortunately, disaster was averted.  I found a longer screw in my workshop that could reach the threads and pull the secondary back to get the screws in again.

THEN, I realized that the directions for the collimator were unclear.  It asked me to move the collimator toward the scope until the donut of light was about the size of ring #1.  Well...  what happens when you have TWO "ring #1's" on the target?  I dunno what you do, but I use the wrong one, that's what I do.  The second attempt, I tested using the larger ring #1.  That did the trick.  Now it was adjusting as I had expected it to, and things were going much better.  It took a little fiddling, but I was able to adjust focus of my scope and pull things back onto the target so I could see all three laser dots.  Eventually, I got what I think is decent collimation.

What do you all think?  How's my collimation here?  Did I do it right? 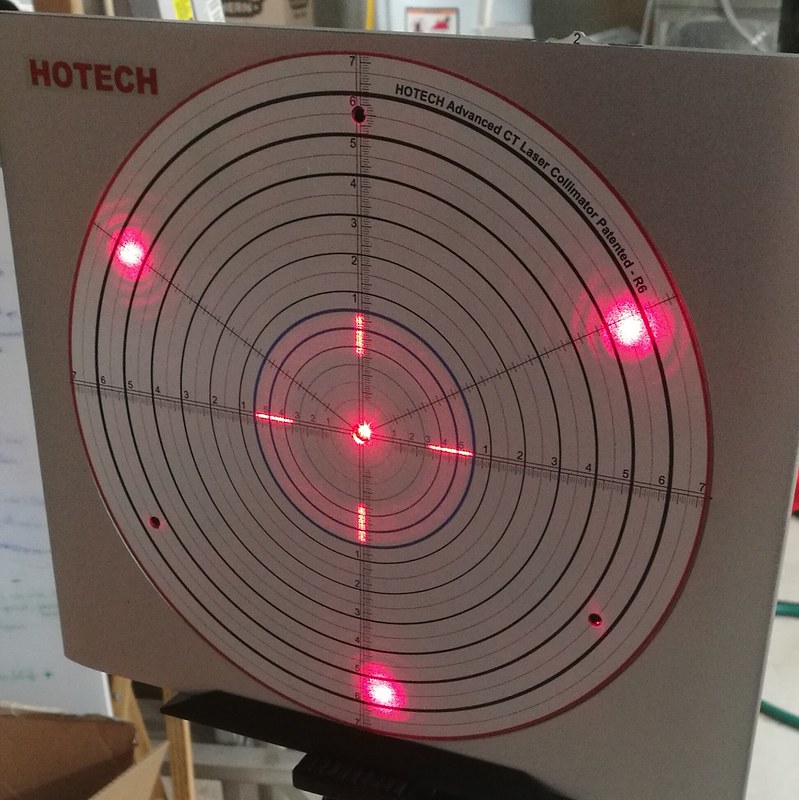 Good for you. I royally screwed up my first one and luckily a really awesome CN guy from not too far away came over and bailed my ##$!!! out. I think I know what to do now but I am still scared death to try it again!

Thanks.  Yeah, I was freaking out when my collimation went horribly awry, and then when the screws fell out because I loosened them too far.  I'm glad I was able to get it back together.  It's nice to have local folks who can help each other out!

Hah, sounds like me everytime I try to fix something.  Except the resolution of the problem comes months later!