Over the last 3 nights a miracle happened in Pittsburgh- the clouds were free of clouds and Moon!

I'd just installed a Rigel autofocus: I needed to figure it out and didn't have a processing plan in mind. Most of the early subs were tossed out hunting down condensation on the inside the sensor window, and a diffraction spike appearing in some stars. I ended up with kind of a weird balance of data, and tonight I finished calibrating everything. Everything is autostretched and has had pretty minimal done to it, I'm just trying to get an idea for how to process what I've got. Which are your favorite colors?

Congrats!!  The leftmost version is my preference.

My favorite is somewhere between the left and the right one.

Yeah, the more traditional one on the left is my favorite.

The left one. I tried this object in OSC plus Ha and found the Ha is so strong that there is hardly any difference between the processing with and without Ha. That is quite unusual for a nebula. It seems like one images an object once and next time one has a better plan how much time to spend on what. For M42 I'd say RGB only is fine.

I've taken a step back and I realize that there are aspects of each that I like. I like the "natural" colors of the RGB, and the core is recoverable, but there's just not a lot of data to play with in RGB and even with a much gentler stretch it's the noisiest integration. The quick-and-dirty SHO provides the sharpest detail and good contrast. The NGRBG is sort of a in-between the sharpness of the SHO and the RGB, but I really like the contrast of the cyan over magenta; I feel like it lends a three-dimensional quality not so prevalent in either of the other two.

It seems likely (raining outside right now, and probably constantly cloudy for at least a week) that I'll have plenty of time to fiddle with each as a starting point, and dig heavily into learning new/different workflows to try to get the best I can out of the data available

It's pushed a bit too far for me, but this is around where I'd like my exposure to be. Colors are probably going to drive me up the wall, but I've come to realize that having options with fresh data is much better than not having fresh data! 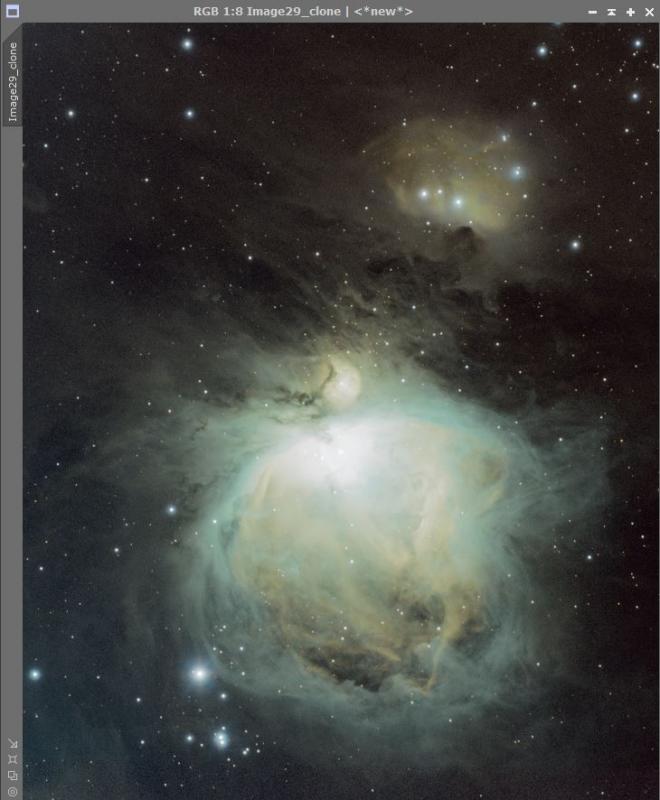 Hello fellow Pittsburgher? Pittsburghian? yinzer?   I too was amazed that we had some clear nights and I too shot M42.

For yours, i like the traditional one on the left but I am also a fan of purple in space so the far right is good too.

Hello fellow Pittsburgher? Pittsburghian? yinzer?   I too was amazed that we had some clear nights and I too shot M42.

For yours, i like the traditional one on the left but I am also a fan of purple in space so the far right is good too.

Hiya! I've been called all three, and much worse as well

Thanks for your comment! I really your RGB! Looks like we'd be very lucky if Orion is still in good position to image the next time the clouds break. I'd really like to get a lot more RGB and some Lum!

I am a 3ap'er but haven't been to a meeting or even Wagman in quite a while. My backyard is good enough for me. I take the kids to the summer star parties though.

Yeah the weather has not been kind and we "spring ahead" soon which means Orion will travel even further before it gets dark!

Looking forward to your data with some L added if the predictions for this Saturday hold.

I’d kill for one clear night, we’ve had crap weather over here for months. I swear I’m going to grow gills soon.

Might sow rice over here. Sell my car and get a boat. Let my fish swim in the garden. Jan 23rd was the last time I took a few subs, since that day it keeps on raining every day and no end in sight. OT. Sorry. Bye bye M42, see ya next year!

But I think it is helpful to think about color (and contrast and brightness and just about any other parameter we control) in terms of information being conveyed. Is this particular presentation of the data particularly good at showing some aspect of the object?

The Hubble Palette is not popular so much because it renders beautiful colors  (the original Hubble Palette pictures were rather unpleasing in some aspects like the magenta stars). Rather it is popular because it tells you something easily interpreted about what emissions are coming from where. I can look at a hubble palette image and immediately tell where there is relatively more and less oxygen (or more and less sulfur), etc.

We stretch the heck out of the saturation in galaxies, yes because in part we have learned to like that presentation, but just as importantly, it helps highlight where there are many young very hot blue stars, or a higher concentration of cooler stars.

When we use Ha and add it to galaxies, it may improve the looks for some (I typically detest it but that is me), but more importantly, it is highlighting where the Ha regions in the galaxy reside.

BTW, this is how I personally determine when some things are overdone. For example, when things get really saturated, then the colors actually start to posterize. At that point you are showing less information, not more. And so I personally think it is time to pull back on the saturation.

This is all IMO. There are users on Astrobin that are very very popular and have pushed the saturation to the point where it looks like a cartoon to me. Posterization of color is everywhere. People like it, and they didn't ask my opinion.