10 replies to this topic

I’m a big fan of all nebulae and I’m a big fan of observing the brightest of every type of DSO. That leads me to Herbig-Haro objects, which are very unique considering they are formed when narrow jets of gas are ejected by newly born stars collide with nearby clouds of gas and dust at high speeds. In late 2018 I saw my first one – HH12 – in the complex region around NGC 1333 on the border between Perseus, Taurus, and Aries. In the October 2019 Sky & Telescope, my friend Richard Wilds wrote about HH12 and the others in the area saying, “Bear in mind that Herbig-Haro objects are difficult targets because they’re small. They’re also faint. Many are often overlooked in nebula observing sessions because they don’t always appear nebulous, but they’re well worth the effort.”
I recently learned of another “bright” one – HH1 – in the 2020 edition of the RASC Observer’s Handbook. In was listed on p322 in their section titled Deep-Sky Challenge Objects. After digging around on the Internet for an image of it, I ran across this phenomenally complex-looking image. And it showed an even brighter Herbig-Haro object – HH2 – just a little further south. Considering they both lie right next to the (7x35 binocular visible) reflection nebulae NGC 1999 (I never knew!!), I’ve been dying to take a look at them in my vintage Meade 10-inch SCT ever since a friend bought me my copy of the Observer’s Handbook two months ago! I finally made it out and found that HH2 was visible as a small, nonstellar glow of even brightness at 153x while HH1 was only (and barely) visible at 322x.
So here is my question. Are there any other HH objects that should be bright enough for me to see? On the Wikipedia page for them, it mentions that “Over 400 individual HH objects or groups are now known” and that “Herbig–Haro object HH32 is one of the brightest HH objects.” Does anybody have any other ones for me to savor the view of? Thanks in advance!

I went down the HH path a few years ago and kinda gave up on them...over half I looked for came up "did not see". Perhaps its time to restart the list!

The best way I've found to find observable objects from little known catalogs is to use the freeware planetarium program, Skytech X.

The first step is to download the catalog ... in this case the "General Catalog of Herbig-Haro objects (Reipurth +, 1999) ... by opening "Virtual Catalogue" and searching for "Herbig Haro". If the catalog is on the internet ... no matter how obscure ... Virtual Catalogue will find it and download it.

Next, use the HiPS option in Skytech X to display an interactive DSS deepsky image that will be low resolution at wide-fields and then gets progressively more detailed as you zoom in. With the Virtual Catalogue activated, all the HH objects are displayed as small boxes over the DSS image. You can scroll around the image or zoom in and out to look for interesting HH objects or just search the HH catalog to look for a particular image of an object.

Here's a DSS (red) image from Skytech X that shows HH 12, which you have already observed, with an interesting grouping of several HH objects just south of HH 12.

Good Luck on your quest for HH objects ... 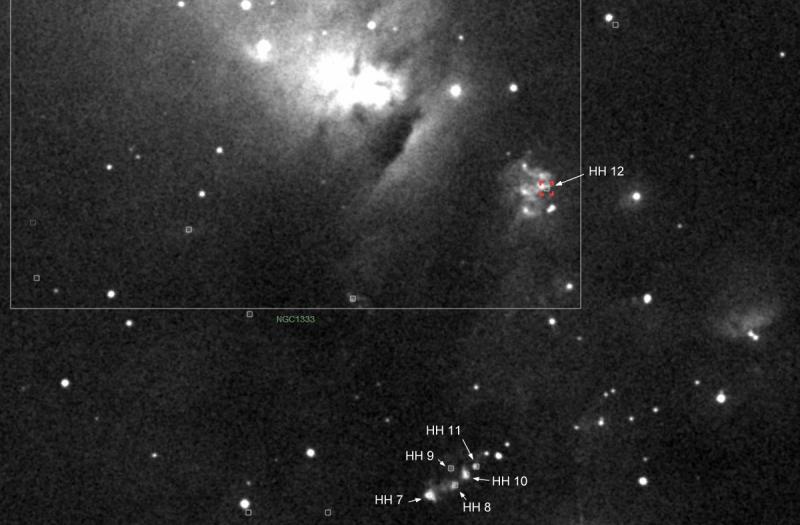 There's HH 221 in Aquila, probably better known as Parsamyan 21.  I've observed it several times in 18" and larger scopes, but here's my last observation.  I would imagine the tail would be difficult in an 10".

This object was on the 2014 TSP Advanced observing list and here's Larry Mitchell's write-up:

Parsamyan 21 is probably an FU Orionis-type object although recently this has come into question.  Measurements reveal a circumstellar envelope, a polar cavity and an edge-on disk which seems to be geometrically flat and extends to 360 au from the star.  Cometary and bipolar nebulae are a class of objects having the distinctive visual appearance of arc or fans of nebulosity associated with individual stars.  The shape is due to the radiation and matter from the stellar surrounding which is collimated by circumstellar material probably in the form of a disk or torus, to flow out in one or two opposed directions to give the characteristic nebular shape.  Cometary nebula appear to be single lobed nebulosity associated with stars and there appears to be a lot of variation in the nebular structure, which can be a narrow arc, a fan or even a range of nebulosity.  Cometary nebula are found only in association with pre-main sequence stars.  Within the framework of an evolutionary sequence of FU'ors, Parsamyan 21 can be classified as an intermediate-aged objects.  FU Orionis stars are YSO, whose luminosity after a sudden increase by 3-5 magnitudes or more slowly falls within a period of decades.

Isn't variable Gyulbudaghian's Nebula an HH object? HH215 I think. And you gotta love the way it rolls off the tongue. I'm sure with your demonstrated observing skill you'll pick that one right up. It's a cool object.

Very interesting. Following this. And I will try to search some HH objects...

So here is my question. Are there any other HH objects that should be bright enough for me to see? On the Wikipedia page for them, it mentions that “Over 400 individual HH objects or groups are now known”

That was true when the Reipurth catalogue was produced in 1999, but that is no longer the case.

Attached is a catalogue of 2,228 Herbig-Haro objects that I created from SIMBAD. Use it to search for

bright objects in the inset Aladin viewer, then add the catalogue to your favorite planetarium program

Very interesting. Following this. And I will try to search some HH objects...

Here are some HH notes to go with the Young Stellar Objects guide in Post #2.
The attachment shows where to find HH 959 on the chart in the guide.


Also tagged with one or more of these keywords: astrophotography, charts, dso, observing, SCT