Just tried out the CEM40 for the first time. I have to say it is impressive for a inexpensive mount. From box to imaging in less than a day. Right out of the box and a guiding assistant run in PHD2. No fiddling or mechanical adjusting. The Ipolar worked well. During a 400sec guiding assistant a 0.1arc/minute alignment was indicated.

This is what she was doing with no PEC training yet.

Maybe you are aware that PHD2 has PHD2 Predictive PEC Guide Algorithm (although I don't think it makes so big difference in that guide curve).

That looks good. I am curious about your results in CEM40’s PEC if you have a chance to try it. My result on CEM40 was not good.

Hi Wei Hao, what was your PE like?  any reason you are looking at the CEM40?  (I remember you used to have a CEM60EC and validated the SDE)

Hi Wei Hao, what was your PE like?  any reason you are looking at the CEM40?  (I remember you used to have a CEM60EC and validated the SDE)

My PE on CEM40 was like +/-7 arcsec.  After I recorded a cycle of PEC and let it play, the up-and-down oscillation goes away.  Instead, it acts pretty much like a steady drift, and the amount of drift over roughly a worm period is about 15".  So practically speaking, it is equally bad.  Maybe I did something wrong.  This is why I asked about this here.

What sort of software did you use for PEC training, PEMPro?

If there is a constant drift of 15” per worm cycle that sounds like an incorrect tracking rate..

I never own an EM-11.  I once borrowed one from a friend and used it for a while.  I don't dislike it.  I almost pulled the trigger to buy one last year, and then TAK discontinued its TM2Z line.

I used PHD2 to train its PEC.  If the tracking rate is wrong, it should be corrected in the training stage and recorded in the PEC.  So it's not very likely.  Something else must be happening.

Steady drift sounds like an error in programming the PEC or implementing its firmware.  The corrections should total 0 and they don't.

I have even encountered a telescope (Meade LX200) with a defective EEPROM for storing the PEC programming.

You are quite right that if the tracking rate were (reproducibly) wrong, PEC training would correct it, because the corrections would pull it to the correct position.

I'm reading this with interest because I keep seeing such mixed reports about iOptron mounts -- people love them or hate them!  I gather manufacturing variation may be fairly large.  That's the only explanation I can think of.

But it is a high end niche, halo product for Ioptron.

Wei-Hao, I saw you had an EM-11 in your astrobin so I thought you owned one. How did it compare to your CEM40?

Those numbers look pretty good! Like you, I setup my CEM40, ran the guiding assistant once to recommend some numbers and haven't touched anything since.

I never turned on the PPEC as I am happy with my guiding.

I would say I like CEM40 more.  Its GOTO speed is faster, has a higher payload (I once used FSQ106 + Pentax 645z on it, with a not-so-small guide-scope), similarly large PE, somewhat less accurate/tight mechanics, and much less expensive.  The only thing that it hasn't proven itself is situation under stronger wind.  Given the mechanical toughness, I expect it to perform worse than EM-11 in this regard, but I haven't really used it in this situation.

I do not regret purchasing a CEM40. However, given the track record of iOptron, I can't say everyone will have the same satisfactory.  I am not sure how well this mount ages either.  Maybe its performance will degrade faster than a TAK.  I don't know yet.

Wei-Hao, that's very interesting to know. After my bad experience with a CGEM 8 years ago, I no longer considered using Chinese made mounts. My EM-11 guides very well in declination, minimum backlash and reverses very quickly.  Are you saying the CEM40 is like that? needs no tweaking to guide well?

Unfortunately no.  The CEM40 came out of box with large Dec backlash and shaky RA.  The build quality is quite poor, which surprises no one.  The retailer spent some time to adjust both, and allowed me to pay only after I am satisfied.  This is the hidden story of my CEM40.

On the other hand, I had a chance to witness a GEM45 almost right after its announcement.  I tried to push it, like what I would do to every EQ mount.  It feels rock solid.  Even better than my CEM40 after the adjustment.  I don't know why there is such a difference.  It almost feel like that the internal of the two are different, but this is not the case according to iOptron.

I think the bottom line is you get what you pay for.  The are hidden price tags behind all these cheap Chinese mounts.

Oh well... I read all about great experiences with CEM60 etc.

The reason I’m thinking about another mount is incredibly basic... I don’t want to put my EM-11 in check-in luggage..! because it’s too expensive and I’d be peeved if it were damaged or lost by the airline.

I have one of the perfect out of the box GEM45 iOptrons.

Ha!  If you have an EM-400 shipped in a cargo, you wouldn't mind anything happening to the 11.

This is currently how I transport my CEM40 in car: 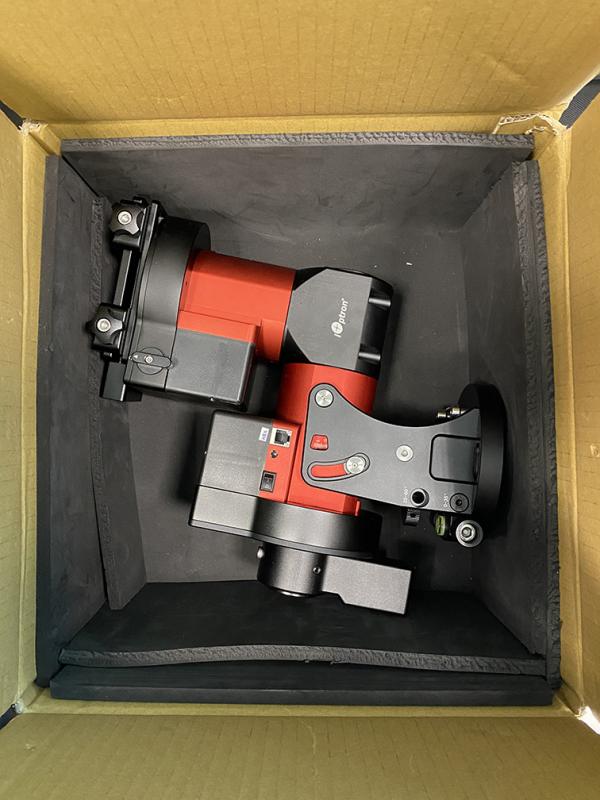 EM-11 fits into the same box.  When I shipped it with checked luggage, I put extra two layers of foam for protection.  And then the paper box fits into my suitcase along with a carbon-fiber tripod and a 500mm/F4 lens (also in a protected box).  Then in the suitcase they are surrounded by soft things like clothes.  The flights between Taiwan and Australia are not known for losing luggages.  So overall, I don't worry about damaging or losing them.  I wouldn't say the same for flights in other areas though.

Yeah, spent money on the case. A bit of modification may work.

I have the same issue with my iEQ45Pro and my Paramount MYT - suspect that this is common limitation for mount head cases.....

You don't need to set it back to 0° latitude, just around 35° in order to fit into the precast case foam.

I cut away some of the foam so that it would fit without resetting from my 50° latitude.

My CEM40ec sure doesn't track like the picture above.  It has a strong periodic oscillation and fairly large RA drift.  At 33 degrees latitude my mount fits in the case but the case seems to be padded with a foam that sticks to the black paint on the count.  Still I love the iPolar.

Of course there is no pun intended?!!

Hi I have a problem with a new CEM40 EC I have just purchased.  Following unpacking and spending some time cutting a plate up to mount the CEM onto a meade field tripod and checking the electronics I loaded my imaging setup (7kg scope and gear plus 6kg counterweights) and balanced every thing.  I then noticed that the joint on the DEC axis was opening and closing (by about 0.5 to 1mm) as I took the weight of the scope off.  I made a video of this and sent it to the supplier and they are having the mount back for checking.  Has anyone else observed this or some thing similar?  Like most people I don't know the construction of the CEM mount could be just a cover moving rather than anything more sinister but I certainly don't see anything like this on my G11.  The polar axis of the mount appeared to be stable whilst I was gradually loading and unloading the DEC axis by hand.

This is my first post and I hope I have included the image correctly if not you can view it in my photo album.  The joint that I was observing opening and closing is shown by the arrow in the picture.  If the picture does not come across its right where the red alloy of the DEC axis meets the black rectangle with the white CEM40 graphic.  There is a flat spot on the red alloy collar with a hole in it.  This is certainly an area that is important to the mounts performance and one under considerable stress in the CEM40s design.