After many delays, tonight was the night I finally got around to M108. My gosh, I thought it was brighter than that (around 22 magnitudes/arc second^2), I seem to remember, anyway. Ever sit down to a dim object and wonder how you're gonna see anything at all? I do it a lot, this was one of those objects. But, it was well placed near the meridian, the sky was clear, so tonight is the night. I had been by it so many times, I remembered how to star hop to it. And there it was, in all it's dimness at 67x.

Okay, so the first thing is to crank it up a bit and see what's going on. I toyed between 100x and 120x, and just found 120x was too dim. It's best seen, to my eye, and the image more productive at 100x. Still, it was not as easy as I hoped. It definitely has a nice cigar shape. There is a nice star right near the center, that was easily seen. It's not the stellar core, images show this to be a foreground star (a few other faint star embedded that I didn't see). In fact, it hardly has a bright core at all. Now, I did get a couple of glimpses of a brighter streak running through it's long axis. The "streak" was more extended east of that central foreground star, kind of stubby to the west.

The presence of it's dust lane was pretty easy to detect. No question where it was along the southern edge. The cigar shape did have a very slight mottling to it, hard to make sense of it. But, over time, it did appear to be brighter on both ends, a very slight and fleeting increase in brightness. This gave the impression of darker areas cutting across the cigar shape. One to the east was more reliable, anything to the west was less certain. Only that the western ansae had a small (barely) brighter area, and maybe even a field star, one could make out from time to time.

However, I did kind of see the more prominent dust lane appear to "reach" into the cigar shape just west of the embedded field star. One time I caught a good look at it, other impressions were more vague. I was not sure what to make of it, but verifying the feature against an image shows the dust lane does kind of dip toward the embedded star. That's always exciting to confirm something that is difficult to pin down but you know you are seeing something happening. So, after an hour or so, I guess I was seeing all I can make of Messier 108.

So, I hit Messier 106 and thought about sketching it. Then remembered the 8 Burst Nebula was up, so I slewed over to it before it got any lower. I just did not feel like settling in for another long observing session and it was getting late. So, it was time to pack it in with my primary object for the evening. I'll save both for another night. Thanks for looking.

Edit: Added a very faint star to the south I forgot to include. I use the faintest star(s) I see to estimate limiting magnitude. No idea how faint it was. 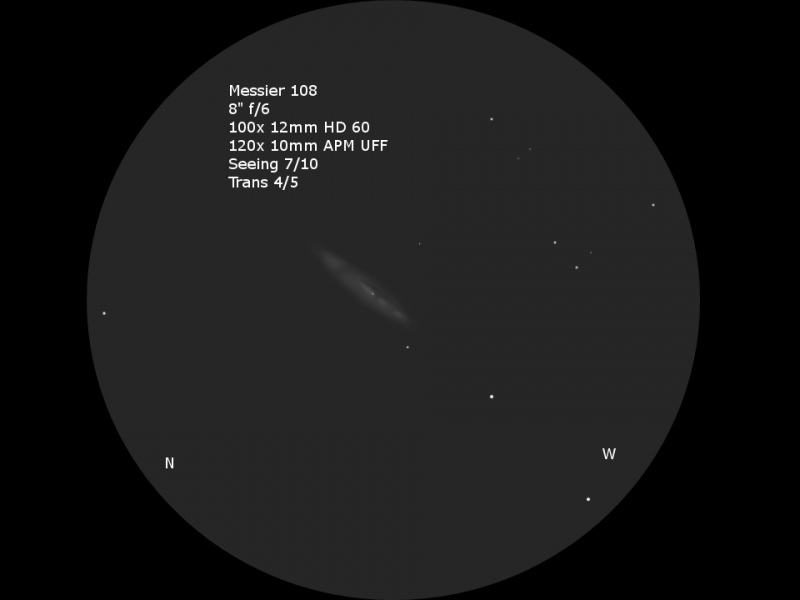 Great impression of M108.  Thanks for sharing.

Great impression of M108.  Thanks for sharing.

My pleasure, thank you.

I’d like to see your rendition of the eight burst . Is it in your near future for a sketch?

The 8 Burst looks promising, Raul. It's pretty bright and large, maybe some detail. Central star was easy. Yes, it's on the short list.

Thank you for saying so, means a lot.

Thank you. Yes, magnitude ~22 in terms of each square arc second of its surface. It's a measure of surface brightness, not the integrated magnitude of 10.7. My sky is about 20.5 magnitudes per square arc second, so it's quite a bit dimmer than the sky. But, what matters is the combined light of the object and the sky relative to the sky itself. Because of this effect, we can see objects dimmer than our sky. To a point...

Great sketch of M108 and textual report. Thank you for sharing!

Very nice capture of M108. It is remarkable from a dark site but it doesn't take much light scatter to destroy the view.

Frank, you're right. It does not take much. Last night was probably an average clear night, nothing special. I recall seeing M108 several months ago, and it seemed brighter and more promising. Which is what prompted me to take a closer look and sketch it. I just had to work a little harder and wait a little longer for it to show itself. I'm pretty sure on a better night 120x would have been a nice magnification, but last night it was too dim at <2mm exit pupil to be productive.

isn't that a photo?
really pretty

isn't that a photo?
really pretty

Thank you, James, but no. It's a digital sketch rendered using GIMP and derived from my observing notes. It's cleaned up a bit and somewhat embellished in terms of brightness and contrast. The idea is to make it easier for you to look at than it was for me to observe. If it were "realistic", you'd have to stare at the sketch for an hour, too, with the lights off and a towel over your head. I doubt I could make it look realistic because there'd hardly be anything to see at a glance and I need to make sure the sketch can be seen on a variety or monitor settings.

It is realistic in terms of what was seen, often briefly, over time and something of an interpretation of the difficult detail teasing the eye. Observing is much like putting pieces of a puzzle together and interpreting the impressions we pick up on. So, when you put the pieces together and make it easier for someone to see, that's what the sketch does. It is accurate in the detail seen, but it's also misleading because a sketch is a static image just like a photo is. The image we see at the eyepiece is much more dynamic, but it's not easy or possible to replicate that fleeting realism.

So, in a very real sense, a sketch is necessarily embellished. The object does not look like that most of the time, and sometimes it's hardly seen at all. However, it's what the object looks like to me once I compile all the detail noted. If I were to sketch it more realistically, I'd have to do quite a few lesser sketches and compile them in an animated .gif file. Each showing visible detail briefly in one frame but not the others, the others might contain other detail. It's a project I may take on one day, but not today.

Another nice sketch Norme, have you got an album of all your sketches on this forum or somewhere else.

Another nice sketch Norme, have you got an album of all your sketches on this forum or somewhere else.

I do have some in the CN members photo album, but I need to update and clean it up a little. I haven't added any sketches to it in quite a while. A nice website like Cloudbuster, et al, has would be nice.