My AWB OneSky arrived today, but I didn't think I'd get to use it anytime soon. For one thing, it was cloudy and rainy all day. For another, a civic organization I belong to had a meeting tonight.

But on the drive home from my meeting I realized that I could see stars. Still, I thought that by the time I got the scope unboxed and collimated the clouds would have rolled back in. But unboxing and collimating is better than watching TV. So I took the box into the dining room and started unpacking.

It took very little time to get the everything unpacked. Assembly was just mounting the red-dot finder. I put the collimating eyepiece in and noticed I could only see two of the three clips that hold in the main mirror. Went out to the garage to get the Allen wrenches. Lucky for me, the first one I turned moved things in the right direction. Loosen one, tighten the other two, and soon all three clips were visible. Then it was very quick work to get the main mirror lined up. Within 15 minutes of opening the box, I was ready to go.

I took the scope outside through the garage. I could have sworn I had an empty five-gallon bucket in the garage, but I couldn't find it, so I just set the scope on the driveway and sat down next to it. (Luckily the concrete was only slightly damp from the earlier rain.) I wanted an easy target to start with, so I lined up the red dot on the center of the moon and then looked in the low-power eyepiece. A quick turn of the focuser and... OMG that's bright! I'm going to need a moon filter for sure! I spent a couple of minutes admiring the view, then I pointed at the middle star in Orion's belt. I figured that would be a good check on the finder alignment. With the star centered in the viewfinder, the red dot was a bit high. I ran out of adjustment before I got it right on. I know in the OneSky thread there's a fix for this, but the 25mm eyepiece covers such a wide area that it's close enough for right now.

Next stop: The Pleiades. They were like sparkling jewels on a piece of black velvet, and the wide field of view was amazing! This is such a different experience from my old 3" refractor that it's hard to find the words to describe it.

Then the Orion nebula. Yep, found it in the center of the FOV and again, it was completely not like what I had seen through the DS-80. Time to call the wife outside.

I pointed it back at the Pleiades and she was suitably impressed. Then the moon, and she agreed that it was too bright to look at it for very long. Then I told her "let me show you one more thing. It's kind of hard to see, but let's take a look." I told her to look at the sword hanging from Orion's belt, and that I was going to point the scope at the star in the middle. I did, and she bent over to take a look. "It's fuzzy." I explained that it was a nebula, a cloud of gas illuminated by the stars in its center. Then she said "It's green!" Wow. Her eyes are so much better than mine! I would never have thought that a 5" scope under my suburban sky with a quarter-moon lighting things up would show color in the Orion nebula.

By then the clouds had started to roll back in, so we packed up and came inside. I just can't believe how great this little telescope is.

Well there is about 500 of us in the OS thread that will agree with you.,This little scope can do a lot.,Mine gets much more airtime than any of my other choices..

I just had mine out moonin with a new 17.5mm Morpheus  eyepiece and the OS showed more craterettes than my AT102ED., go figger.,cheers

The AWB OneSky is a nice lightweight scope.The included table top dob mount is usable and modifiable.
Light enough for a small goto mount, also. Such as this NexStar GT combo. 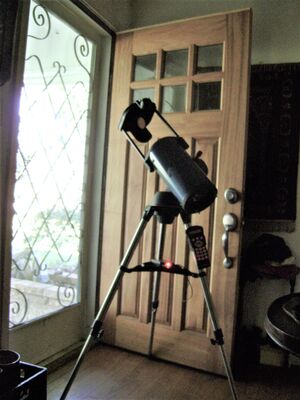 5" is enough to make things really interesting, especially at a dark site.  I agree that these scopes can out-perform most 80 and 100 mm refractors.

Congratulations, on your purchase. The onesky 130 is a great grab-n-go scope. I lost count how many times I run outside, and just place it on the ground and get great quick views of many celestial objects . It makes me feel like a kid again. It's the best $200.00 I have spent !

Good review of a great little telescope. I'm enjoying mine.