I only have Stone and Deschutes in the beverage refrigerator but I have about 250 bottles of good wine out in the cave aging.

My Honda Accord was made in Ohio.

Well I got 240x on Mars a couple of hours ago with my 80ED DS Pro. I'm impressed! Seeing was superb, easily Antoniadi I. Transparency not so hot.

At 00:00 BST I was set up with my Evostar 80ED DS Pro. The transparency wasn’t very good as this is traditionally the dew season. It was fairly warm however with a cloudless sky. I expected about an hour or so before the cloudy sky porridge came. After around twenty minutes of rich field I decided to turn my attention to a rising Mars.

The plan was to observe with Baader Neodymium and Baader Contrast Booster filters consecutively. I’d usually start off with a 7.5mm Takahashi LE combined with a 2x Tele Vue Barlow for 160x. This time I thought I’d try a 3.2mm TS Planetary HR (187x) I’d actually bought for a different scope. The image was so sharp and clear I rapidly switched to a 3mm Tele Vue DeLite. Although not much different to the HR in focal length I prefer the overall ergonomics of the DeLite. Interestingly, the HR seemed to hold its own with the DeLite for clarity, sharpness, and contrast. In my experience the 80ED is regularly capable of 200x on many targets. This really helps with perceiving Martian detail.

After a while at 200x I wondered if I could use other filters. So I went back to the house and fetched a Baader Orange 570nm Longpass and a Tele Vue Bandmate Planetary. I also brought a 2.5mm TS HR eyepiece along just to see if I could push to 240x. The seeing must have been a good 'Antoniadi I' as the image was still sharp at 240x. I abandoned the 3.2mm HR and decided to test the Contrast Booster, 570nm Longpass and Bandmate with the DeLite and 2.5mm HR. 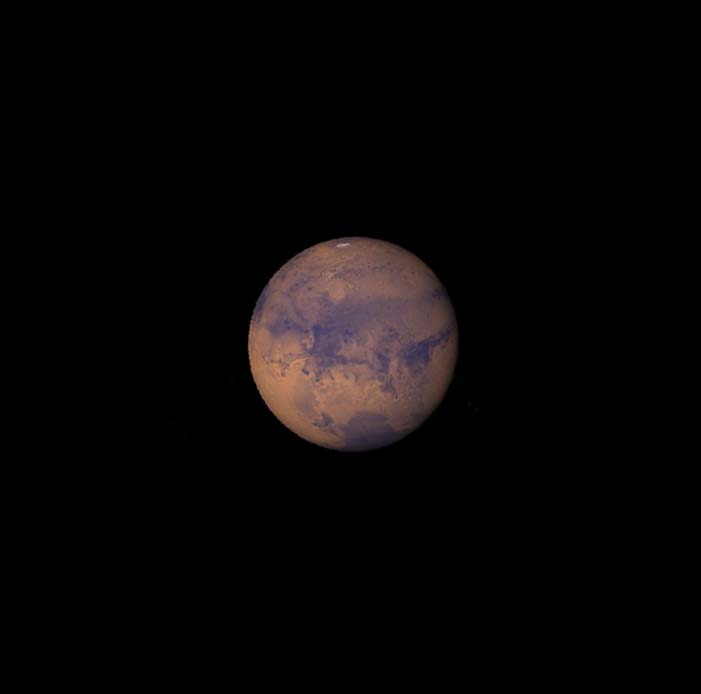 Above image is a screenshot from Sky-Safari 6 Pro and has been mirror reversed and rotated.

All three of the filters were an improvement on no filter, but the Orange 570nm revealed far more of the dark albedo features than the Contrast Booster. It’s always been a favourite of mine for Mars. The Bandmate was a close second and revealed more features in many respects, particularly the NPH. I was quite impressed with the amount of detail using an 80mm aperture. I could make out what appeared to me as an angular ‘hook’ formation to the east of Valles Marineris (I couldn’t see the Valles itself of course). After some research I believe I was seeing the region just below the Ophir Planum and Xanthe Terra regions. Possibly the edge of the Thaumasia Planum. I observed roughly until Mars reached transit. The cloudy sky porridge never did come.

Above image is a screenshot from Sky-Safari 6 Pro.

All in all I'm pretty impressed with the Evostar 80ED DS Pro's performance.

I shall have to try the Vixen HR 2.4 in my Skywatcher 80. 250X surely pushes the boundaries.

And also see how the Braska 80 triplet compares.

I shall have to try the Vixen HR 2.4 in my Skywatcher 80. 250X surely pushes the boundaries.

And also see how the Braska 80 triplet compares.

200x is a good average for me on certain targets, 240x was unexpected. It seems perfectly capable of over 240x though in the right conditions.