Been revisiting some Messier objects lately. I was a bit "aware" of my surroundings last night observing during lock down and I believe a curfew. Another eerie night waiting for my dog to bark at someone. He didn't, but I could not help but wonder who may pass by in the night looking for a little "handout" in desperate times. Day 5 or 6 of quarantine, kind of losing track. I did not stay out long, but I was not going to waste the night. After I gathered my notes, I called my wife to help me pack it in. Call me a little spooked alone in the dark behind my place.

So, what an unexpectedly beautiful galaxy. After some trouble star hopping to it not really paying attention, the bright core was easily spotted. Soon, a fairly bright cigar shape became apparent. Now, early on in the observation I kept seeing a rather prominent dark feature to the west of the core. I have seen pics of M106, sure, but I did not remember or expect to see something like this. But, it was undeniable. I tried to sketch it to scale for effect, but I hope it shows up well in the rendering.

Soon, I began to see short glimpses of a tiny bright spot of a not so easy stellar nucleus. Some dim stars flickered in and out of view, maybe the faintest one off the NW ansa at magnitude 14.6 according to Wikisky. I only noted the brighter field stars for reference. Now, amazingly I began to see the core as a very short, thin linear feature tilted slightly clockwise from the general cigar shape. Almost mottled, and at one point I thought it had at least two brighter condensations. Again, I tried to sketch it to scale for effect and hope it shows well.

I began to see a very dim and slight "S" shape to the galaxy. The northern "arm" appeared a little brighter and more extended, the southern arm just a stubby slightly brighter patch. (When I say arm, I do not mean clearly seen. Rather inferred by some slight variations in surface brightness I catch from time to time). The overall impression gave it an "S" shape. Now, I was aware M 106 has some prominent dust lanes away from the small bright core, but I had no idea if I'd even see them or not. But, I did catch one convincing glimpse of a broader dust lane to the west. Trying to decipher images does seem to suggest this one is more prominent than the other.

I spent most of the observation, kind of rushing through it because I was "alert" to my surroundings being under the hood, at 100x. I did gather up the courage to walk over and pick up my 10mm APM UFF for 120x. Turns out, 120x was, in some ways, the best view. This is when I noted the "S" for and the thin bright core. The larger dust lane and the small prominent one were noticed at 100x.

I tried to sketch it to show all the detail, large and small. There is some finer detail close to the nucleus I hope shows up well in the rendering. Many of us know and understand, this is not what the galaxy looked like most of the time. Rather it's a composite of more dynamic short glimpses compiled over the 45 minutes I spent watching the galaxy. Upon verification, I was shocked at how close I got to what the galaxy looks like. This is how it looks to me, which is why I sketch, and to share with others. I am really happy with this one.

Click to enlarge it a bit, especially to see small detail near the core (I hope). Thanks for looking.

Edit: Trying to make the detail show a little easier. The posted image is about 80% of the original size, so I have to compensate a little more for the smaller image without overdoing it. 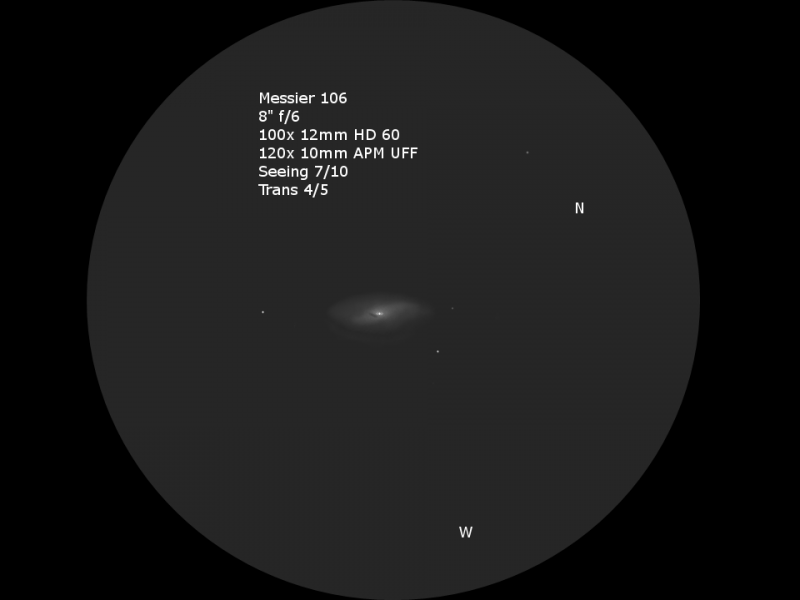 That's a beautifu sketch Norme showing some wonderful detail.  Thank's for posting, its moving me to take a look to see what my little scope will show.

Thank's for posting, its moving me to take a look to see what my little scope will show.

Go for it. I was surprised what my little scope can show.

Thank you for taking the time to produce this beautiful image!

Another great sketch, and interesting narrative. Thanks for sharing.

Thank you for taking the time to produce this beautiful image!

Another great sketch, and interesting narrative. Thanks for sharing.

Thank you both, it's my pleasure.

This is an excellent sketch.

Always great to see your sketches.

This is an excellent sketch.

Always great to see your sketches.

Apparently O'Meara saw that tiny dust lane through is 4" scope. I thought I was breaking new ground in an 8" scope.

Silly me...(kidding, just funnin' myself). Its fun to eek out what we can and rewarding to share.

M106 is massive and full of surprise. Glad you saw as much as you did and I can see why you're happy with the end result. Always good to see your work here

M106 is massive and full of surprise.

Martijn, I noticed your sketch of M101. This one scares me because I recall (long ago) it as almost nothing but a faint background glow. No hope of anything. Not like what you captured, arms are probably out of reach of an 8" under good conditions. I have to give it a try, anyway, but I am not hopeful of seeing much. (Maybe that's a good thing LOL). I normally chose galaxies that seem to offer some level of detail that /might/ be seen (always been averse to elliptical galaxies for that reason). Your sketch of M99 looks very promising. It offers some hope.

You know, quite a few sketchers have their own web sites. I was wondering if it might be a good idea to develop a pinned thread in the sketching forum with a list of all known sketcher websites who woudl vounteer or give permission, if required, to post their URL. It's hit and miss, really, googling for them. Yours in one I frequently look at for inspiration.

Hi Norme, M101 is a different target but it will help you to bring a detailed drawing made with a large telescope to see if you can see some of the details. I reckon that you will need a very good sky with a 8" dobson, but perhaps there's a chance.

Would be nice to have a thread with all sketching websites, I love to make comparisons as well to what others have seen.

A good starting point is https://www.deepskylog.org/ where you make do endless queries and lots of drawings can be found too. I use it to log all my observations and couldn't live without it anymore.

Martijn, maybe that gives me something to do on lockdown. Put my sketches up there over the next few days. Nice site. I've seen it before, but lost the bookmark and forgot about it.

Thank you! Be safe!

Edit: Looking over some observations, it's amazing how differently folks render their observations. Even the same observer in a different scope. Here's one that looks a lot like mine. Comforting.

It's been a while since I've visited M106, but like you said, I remember the Northern arm being brighter and the Southern arm being more elusive. Nice work and narrative.

Thank you, Martijn, I hope folks read the narrative rather than just looking at the sketch. I hope it adds something to the experience.

As always the narrative reads beautifully and the sketch is superb!

Great observation, Norme. Just for comparison, here is a quick sketch from our light polluted backyard through 5in refractor. I too saw S shape with bright bar pointing at different direction than the main galaxy body.

Sasa, you're one the masters in my book. Great observation. It's nice to get confirmation from you, O'Meara, and others. Thanks for posting.