Cloud pattern evolution on venus on 24th march after 7Hours

Here are reports of venus performed on Morning and end of afternoon of 24th march.
Images were average good, enough to see the overall banding pattern.
AL was not there, bright spot as well.
Modifications on some streak of the pattern were noted with comparison of the Morning report, same day.
The 17H35UT sketch is given for a verification of the darkness zones presence at the Terminator.

The acquisition conditions are a key point: making direct comparisons between data from different observers may differ.

Here a RG435 baader filter, deep blue. If an astrodon filter, near UV, is used the atmospheric layers on concern are typically surfacique.

A deep bue filter involves deeper atmospheric layers, a yellow-green more and so.

Have a look on the 24th date where some identified also modification of some area of the cloud pattern Mr Sussenbach), 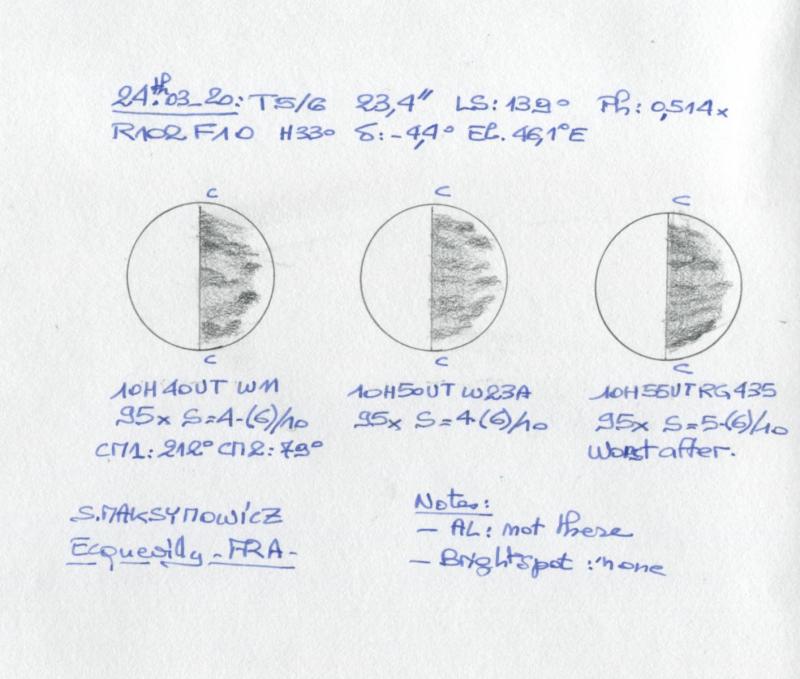 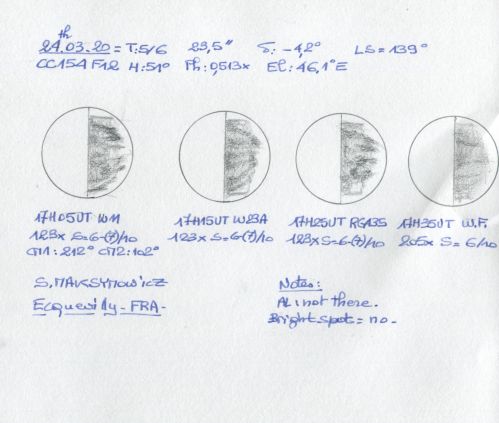 Absolutely wonderful sketches Stanislas, and an inspiration to other planetary observers. Venus is not an easy subject to study, especially as many seem to struggle to detect any detail at all. I've attached my most recent sketch which was made two days prior to your own, while Venus was quite high and set against a blue sky. Very similar results as far as visible banding of the cloud tops. 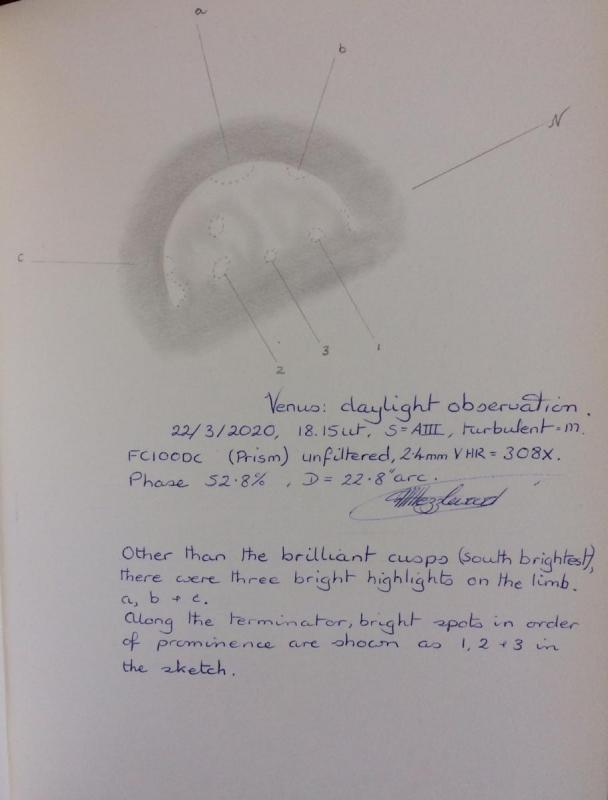 Thanks Tom, Mike for your kind words, gents for their likes also.

Mike for responding to your post, I suggest to reduce your magnification in use.

This is to be tried Under fixed or quasi fixed images. With such some troubles may appear mainly near the limb where ghost features are created by seeing. It seems in association with Something existing but seen during seeing holes this becomes Something else. You may try different magnifications one or two more, say for a 100mm aperture 100x, 150x until your 308x. This acts for reducing the amplitudes of the features agitation for keeping at the best possible the contrast level.

Indeed at 308x the light glare is negligeable but the contrasts are mostly washed more than at moderate magnification.

It should be researched the compromise between glaring and seeing effects, without filter use and with each color filter in use.

For collecting the main clouding pattern, no need for watching with big guns, you know this I think (everybody doesnot consider this). From 3" until 6", we are on board and this is enough.

Preferable to keep a more stable image in such and researching the features on a tiny disk, adjusting the best magnification for clearest captures.

It must be preferable to observe on tiny disk (providing that the apparent disk size appearing at the eyepiece is minimum the moon size at a naked eye).

Difficult for going further with regards the sky conditions of our to-day period, windy and agitated mostly.

Reducing your magnification in use should provide you more featuring.

Now the filter use.

On such planet, this is mandatory, not for enhancing the feature contrast, but for showing the pattern related to color segment eg wavelenthes. This is corresponding to a depth into the planet atmosphere. This is instructive for data collection and data reductions.

Even if UV filter is employed, not giving its name or light transmission characteristics, data are useless, except for an album.

I tested in past the vision of venus at sun rise, day, Sunset, night for the AL research and also regarding the overall pattern, my conclusion was that this quite undifferent, except for the AL.

For me the best moment is day light when the seeing is at its best, no rule about, this involves the light glare reduced on the disk, the best benefit.

Excluding the fact that on a day modifications of the cloud pattern may occur. Mr Yamazaki in Japan studied this on a Week these modifications that altered some area on an hourly basis. He operated on very good moments and the conclusion was this is very difficult to follow and answered the root causes of alteration (not Simply fluids on movements).

As amators we are, we could undertake such follow-up, but missing is the observation site quality.

Here after the observation of yesterday performed with the 127mm EDT apo, seeing was very moderate at moments sothat this reports was dressed off.

Since months this was the first day vey interresing.

Hope I answered you properly. 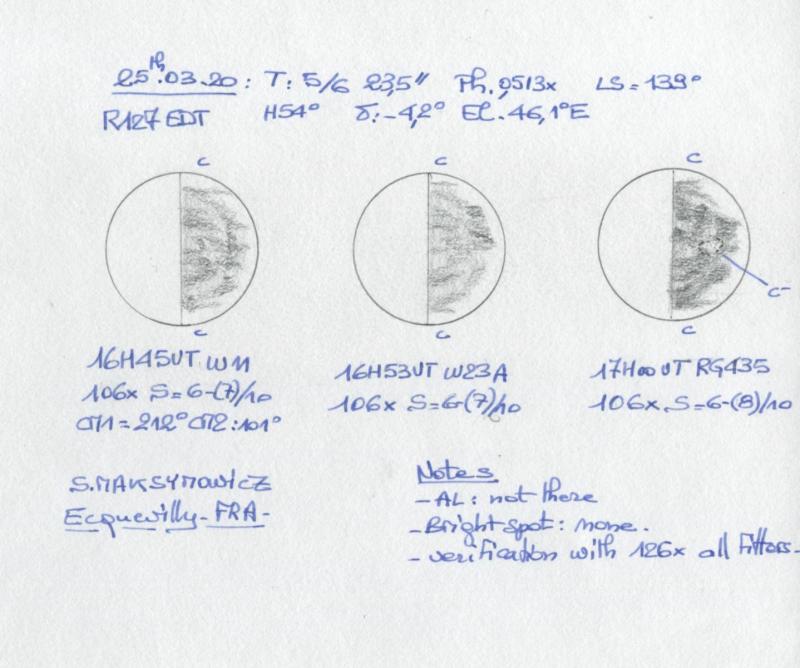