Tell us why you resold your reflector(s)

In the refractor section I started a discussion and asked about the reasons for reselling or giving away one's refractor. Might be interesting to hear about experiences and reasons for doing the same with reflectors.

Someone said "this is like looking through a refractor!" - and offered money.

I'm not going to comment on the thread in the other forum...those folks live in denial!

I've sold always because of too many accumulated, change of focus (visual to imagery to visual to Night Vision) or going up in size or capability. I've never tried to sell off a piece of junk that I'm frustrated or disapointed in --- those go straight to the Town Dump. Refuse to pan off the lemons onto someone else.    Tom

I gave a 4.5" Orion Starblast to my brother as he was interested in trying out the hobby.  So far, he hasn't had much success.  Unfortunately, he lives over 250 miles away so I can't help out much, especially now when travel is not a good idea.

In the past 20 some odd years, that's since I got my first Dob and sold my C-8, I have owned a number of reflectors, both EQ mounted and Dob mounted.  A good number of them were purchased on Craigslist for relatively small amount of money and were projects, fix them up, find someone who needs a scope and pass it along.  There are lot of those and they were never intended as long term scopes.

One such was a blue tube Coulter 13.1 inch.  I had seen it in the classifieds when it was mistakenly offered as a 16 inch for $400., I went rushing out only to find it was a 13.1 inch. I explained it all and we had a good time anyway.  Then a couple of years later, I was at a garage sale some miles from the original location and probably 20 miles from home, very unusual, and there it was.  They offered it to me for $100 and I took it.  It eventually ended up with some boy scouts.

Another scope like that was a 6 inch F/5 mini-Dob called a Mirascope.  It had been a kit scope and I was quite nice.. The wood was Baltic Birch and it has very good optics. 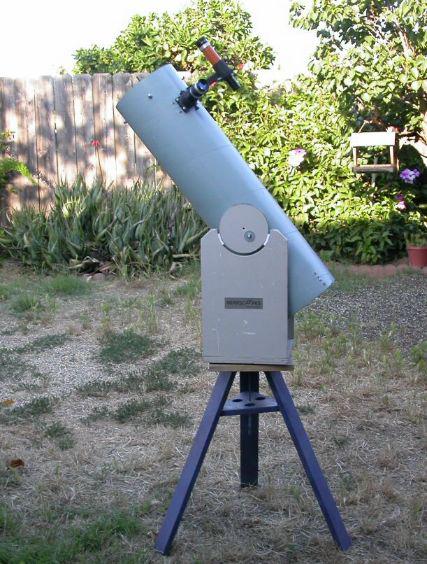 One evening a coworker called me up asking my advice about what telescope to buy.  It seemed his 15 year old niece who lived in the midwest had been battling cancer.  She had been through three rounds of Chemo and had decided she was not going to go through another painful and unsuccessful round of Chemo.  One of her wishes was to have a telescope and look at the night sky with it.  I told him to come over, I had something for his niece.  I gave him the Mirascope and some eyepieces, he packed it all up and sent it to her.
It arrived in time and she got to use it before the inevitable.  That was probably 10-15 years ago.  I have always wondered what happened to that scope.  These stories could go on for a long time.. The 8 inch Dob that went to a school teacher for his class, another 8 inch Dob that went to Texas for a disabled astronomer.  These were gifts, I felt I was an instrument in getting the scopes where they belonged.
Those were good scopes but they were never going to be part of the my main scopes, the keepers.  Usually when I buy a good scope, I keep it.   In mind my, these are the keepers that I have sold:
- Orion XT-8  This was an early XT-8, made by GSO with a 1.25 inch focuser.  A good scope but it became redundant when I bought a 10 inch GSO in 2003.  at that point I had my 12.5 inch Discovery, the XT-8 and the 10 inch GSO.  The XT-8 was the odd man out.  I gave it to the astronomy club in Blythe that was just getting started. 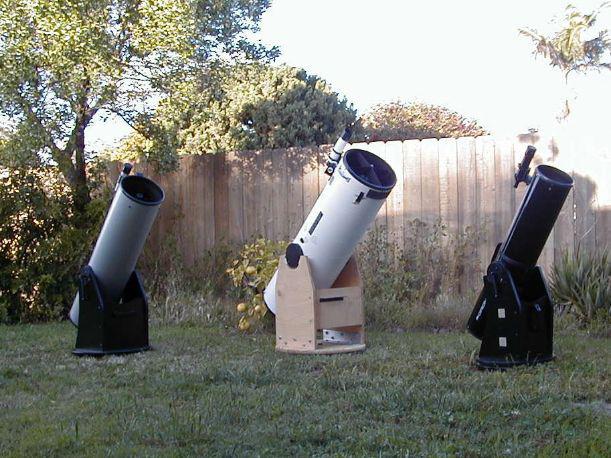 - Orion Space Probe 130ST.  I bought this used on Astromart, just the OTA, someone had put a 2 inch focuser on it.  I had it for maybe 10 years, I had good optics and made a nice wide field scope as well as a planetary double star scope.  I even did a little A-P with it.  Eventually, with the arrival of a quality ED-apo  4 inch refractor, it became redundant and I passed it on to a Cloudy Nights member in the Midwest. 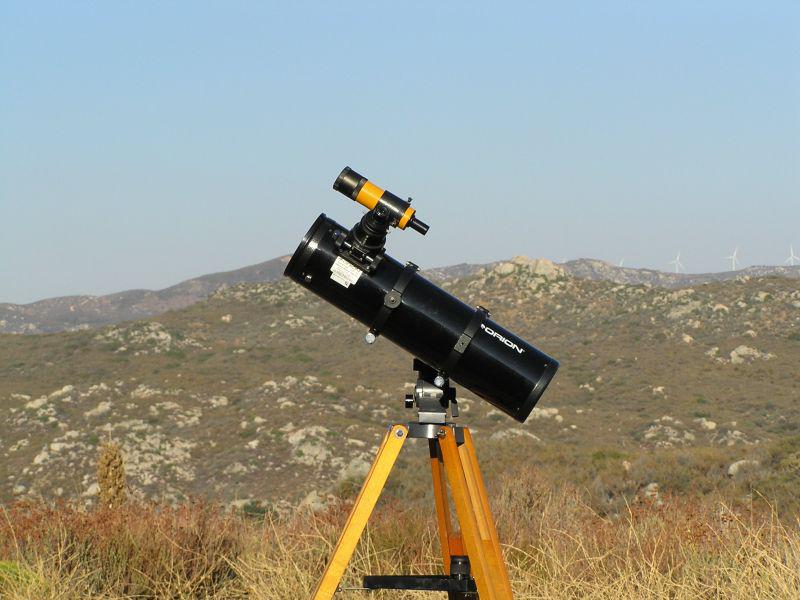 - 12.5 inch F/6 Meade Research Grade.  A wonderful big old scope that weighed about 300 pounds.  I had it probably 10 years but it never went beyond about 10 feet from the garage door.  Some amazing images but just impractical.  When I got a deal on a Starsplitter with a 13.1 inch F/5.5 Royce mirror and a Tom O. EQ platform, the Meade became redundant and I gave it to a young CN member to restore. 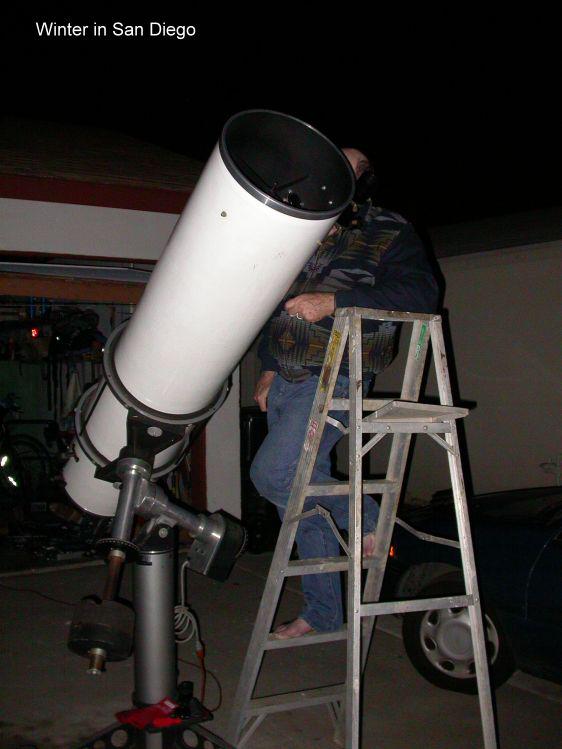 - 25 inch F/5 Obsession, "Junior".  Another wonderful scope, very capable and very big.  But it lived in a garage in the high desert so all I had to do was roll it in an out the door to observe. I had a serious ladder and I had some wonderful views.
It was a beautiful December night, right before Christmas 2016.  I would be 70 in a little more than a year.  I was standing on the top platform of the ladder just looking out over the countryside, looking at the beautiful night sky and I realized that this was pushing it too far.  I was observing all alone, the nearest hospital was 50 miles away, if I had an accident and somehow fell or took a misstep on the ladder, I could just be there until someone found me.  At that moment, I decided it was time to sell Junior and replace him with something a bit more manageable.
It was Christmas eve, we were at the youngest son's house at a family celebration.  I checked Astromart on my phone and there was an ad for a 22 inch F/4.4 Starsplitter that was NOS, it had been purchased but never assembled.  It was in Reno, a 500 mile drive.  I got real nervous.
I called my wife outside, we talked it over. She was fine with me buying it but I needed to eventually sell the Obsession. I was fine with that, it has served it's purpose, it would be replaced.  I sent the Email.. We made the deal.  It turned out the seller would be in LA in two weeks. 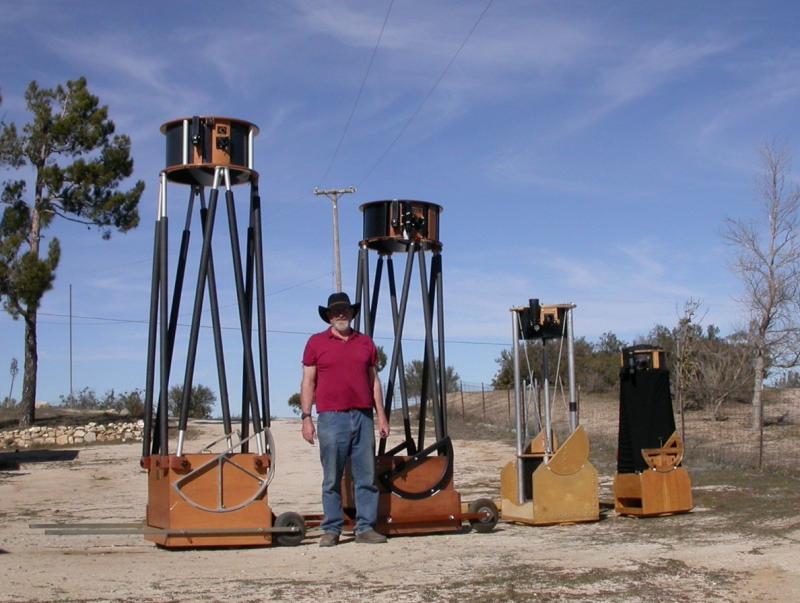 You can see how much shorter the Starsplitter is than the Obsession.  In retrospect, It was the right move.  A month or two later, I sold the Obsession to a young guy who had the energy for a scope like that. 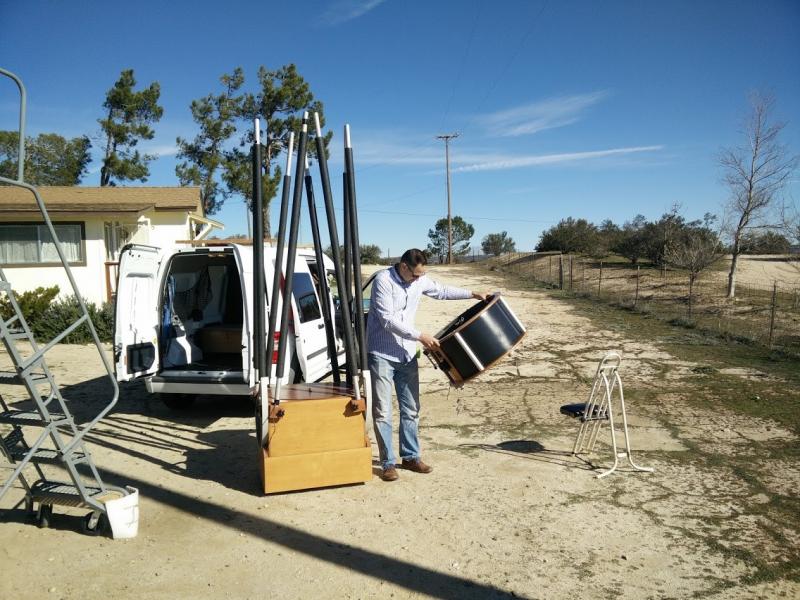 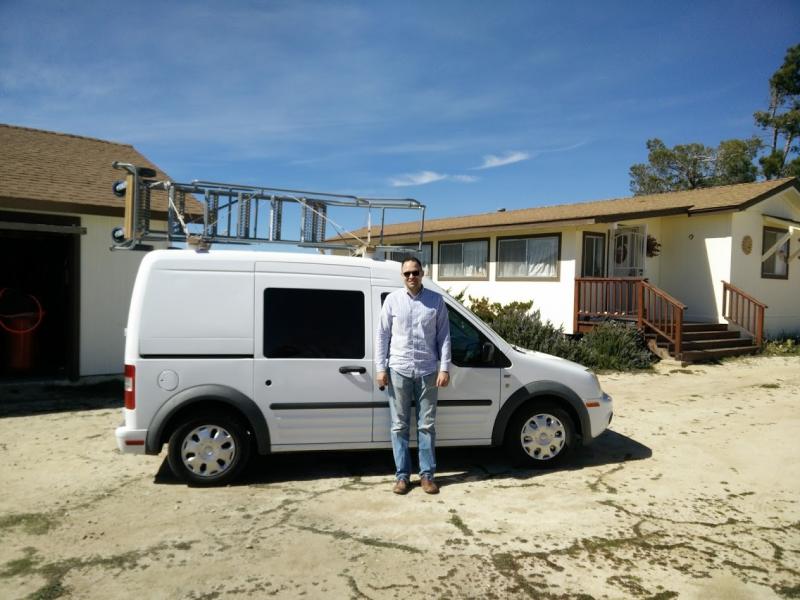 I’ve used lots of mass produced dobs with great optics, but not one with the structure that compares to a premium dob. I eventually pulled off the premium parts I had fitted to my XT12g and used many of them on my 16” SDM. What remained of the 12” Orion I took out to the rubbish tip and dumped it. I have years of good memories with that dob, but I haven’t missed it for a moment.

I had a 12.5 inch, f.5 that I refurbished and used for about 6 or 8 years. Originally it was on a heavy truck drum mounted equatorial fork mount and I converted it to a dobsonian, I made the rocker box and altitude bearings out of an old mahogany desk at work. It had a 1/4 inch thick fiberglass OTA, a 2 inch thick primary mirror that needed recoating, I was lucky to get 100X views out of it, and I nicknamed it my water heater scope because it looked like one and was heavy as one. I got tired of lifting the beast into my back seat of my truck every month, and my back was getting tired of it also. My 10 inch LB is a whole lot easier and I can use power when I want. 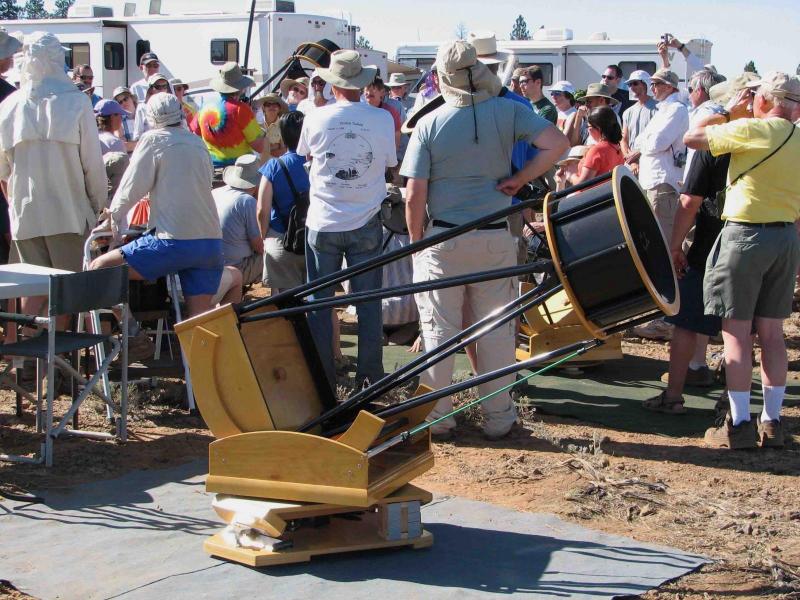 I have been married 41+ years, but have "dated" several different reflectors, all dobs.

My first was a used original 8 inch Orion dob, with the white sonotube type tube, yet I moved up and down in aperture as something caught my eye. I have owned 7 and 11 inch SM shorty dobs, 8,10 and 12.5 inch portaballs from the Pete Smitka era, (RIP).

I currently have a 8 inch travel truss dob that I have owned since 1997, now with a ZOC primary, and a 16 inch f/4 Swayze powered dob, stored in OR to be near the Oregon Star Party. While my "dating" reflectors has slowed down through the years (trying to stay married), living in a townhouse without a garage limits my ability to own a larger dob at home, at least one I can manage to carry up and down my stairs. That said, there may be a 13 inch f/3 in my near future, thanks to Michael Lockwood's mirror magic.

i always have a couple I need to make so I need to get rid of what I have...