Pulling Earthshine details from a "normally" exposed image of the Moon

This is not a post about pretty Earthshine pictures.  You won't find any here!  It's easy to overexpose the crescent Moon and get very good Earthshine details.  This is a post about extreme processing, to dig for details buried in the bottom 0.5% of the raw histogram.  I started with a "normal" exposure of the Moon.  This was taken tonight, with my ASI183mm and 742nm filter with a 6" Newtonian at f/6.  Using a 12 bit capture, 1200 frames were stacked, and the image histogram was 91% filled for the brightest regions.  Shown below is the standard rendering of the image.  All of the images here are shown with their natural backgrounds (slightly cropped), and therefore no false backgrounds or anything like that.  All processing steps were done uniformly across the entire image (no regional effects or masks were used). 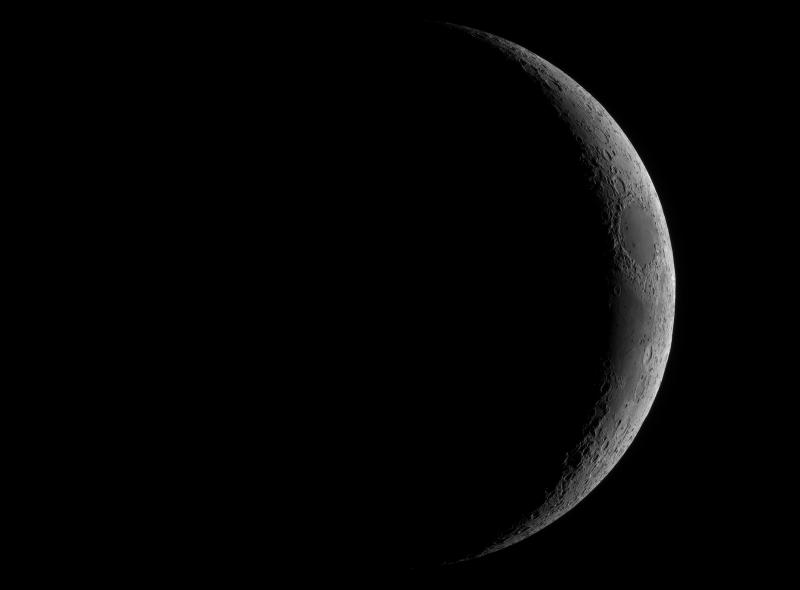 If I raise the gamma somewhat I can start to see the limb of the Moon against the background sky, although you may have to go into a dark room and raise your monitor brightness to see this.  Also, I had to add some noise to the image to prevent banding from appearing.  I probably should have imaged at a higher gain, but I was trying to stay low to maximize dynamic range of the sensor for this shot. 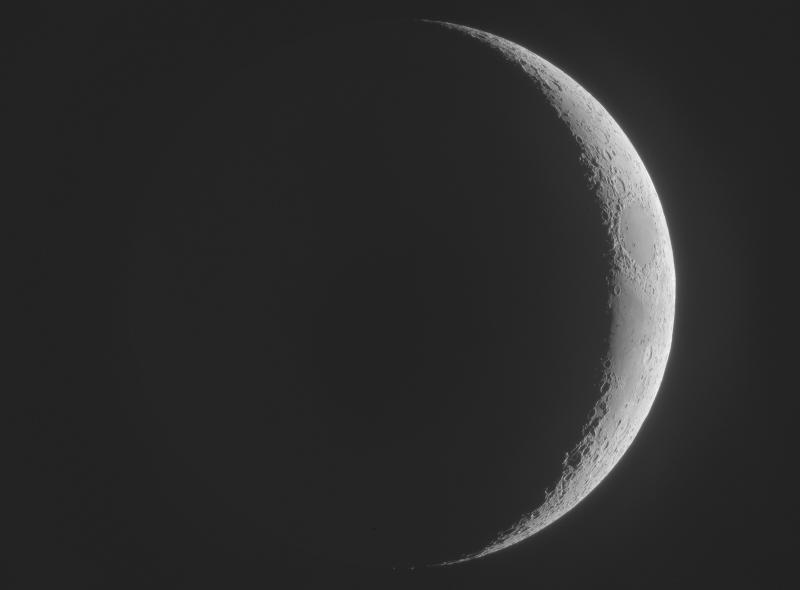 Now, so far I wasn't overly impressed with what I was getting, but I found I was able to dig considerably deeper into the night side of the Moon.  It recently came to my attention in one of Andrew's threads about color (link here), that the stacked output files from AS!3 are linear tif files, without any gamma encoding information embedded into them.  In this respect they are very different from the raw files that you load into Photoshop from your DSLR or mirrorless camera, which have all been rendered by a raw converter (such as Adobe Camera Raw), and this applies a gamma correction so that the image displays properly on your monitor.  The linear files from AS!3 don't have any gamma correction, and so Photoshop displays them as overly dark.  Essentially, they appear as if you were to take a normal image of the Moon and apply an inverse gamma curve to that image.  This information isn't terribly important, because you always adjust the tone curve to correct this in editing (although many people don't seem to realize the raw image is displayed improperly without any gamma).  However, I found that Photoshop seems to struggle with extracting all of the available data when it loads the linear file into whatever working space you are using.  So I used the editor RawTherapee to define the raw file as a gamma=1 linear image, and then output the file using the color space RTv4_sRGB.  The image basically looks the same as if you loaded the linear file into Photoshop and applied a 2.2 gamma multiplier, except that it contained way more data buried at the bottom of the histogram.  I have no idea why this is the case, but when I adjusted the exposure on top of this new base image, many more details became visible on the night side of the Moon.

Shown below is the resulting image.

This is not a pretty Earthshine image.  There are sensor artifacts of many types, and a gaping black hole in the center that I'm still unsure about.  It's worth pointing out that the entire night side of the Moon was registering at a tone value of 0 when opened in Photoshop, and after transforming with RawTherapee, was still only 1 tone value above the background sky (on the 0-255 scale).  So all of the visible details on the night side of the Moon are contained within the bottom 0.4% of the raw histogram.  I was going to take flats, but sadly, it turned into something of a debacle and my camera rotated, rendering that moot!  I did take a few flats anyway, and saw nothing to explain the huge black hole even upon stretching, so I don't know exactly what is going on there.  Nevertheless, I've never obtained this type of clear detail on the night side of the Moon from a standard exposure set for the sunlit side.  You can identify many features....Plato, Tycho, Aristarchus, Grimaldi, and many others.

This data was pulled from the original "normal" exposure, set for the sunlit side (same raw file as the first image in this post). 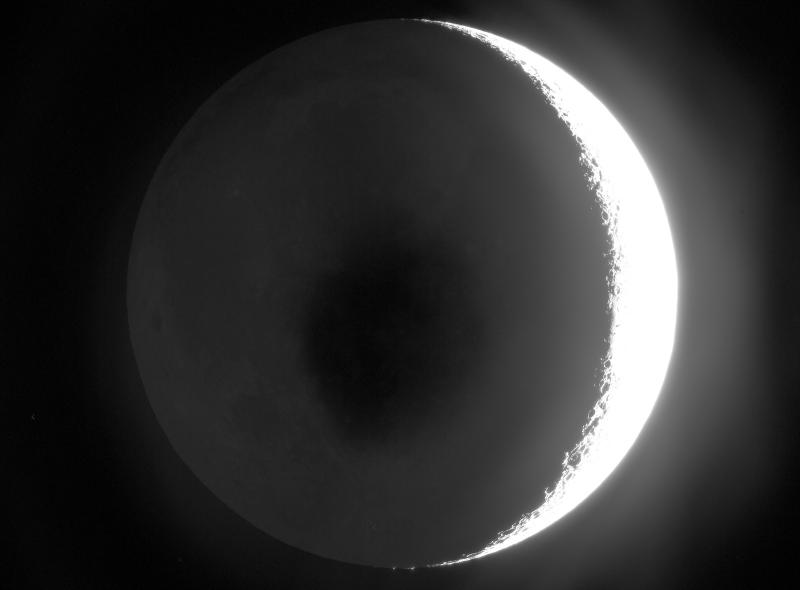 And if anyone has any ideas about the dark patch, I'd be happy to hear about them.  Of course, of all the times for the flats to fail!  I've never quite seen anything like that though, but again, this was all buried at the level of noise in the raw file.

Interesting work Tom, good to see my obsessive ramblings have led to something more concrete

On the level of detail you've managed to extract from the bottom 0.5% of the exposure curve, I'm wondering if PS and RawTherapee are processing the gamma curve differently? One of the things I learned from Mark (aka sharkmelley) was that the sRGB gamma is not strictly equal to 2.2 across the exposure space, rather it follows a strange curve and is actually linear in the region between 0 and about 1 (in 8 bit space). This is not normally a problem for 8 bit files, but on 16 bit images it could make quite a big difference in the lower exposure levels, especially in the areas you are looking at.

Maybe RawTherapee is calculating this differently (maybe correctly) to the way PS does?

What you are observing on the moon may also have implications for extracting (or as Darryl would say, evincing) the very dim moons of planets such as Saturn and Uranus.

P.S. No idea why you are getting the black hole on the moon, maybe you are so close to the bottom of the exposure bucket that the levels are just zero...

My guess re: your "black hole" is that it's a combined binning and stacking artefact ... was it there in there in raw/individual frames?

Nice analysis Tom.  That is quite the stretch.  I am curious if the light falloff is from the secondary mirror obstruction?

Thanks Andrew, Darren, and Steve.

Andrew, yes, it appears Photoshop is dropping the ball with handling these raw linear images.  More on that below with another example.  Needless to say, the gamma application in RawTherapee breathes new life into old data.

Darren, curiously, when I cranked the gain all the way to the max to help center the image, I thought I could see a slight shadow in the live view.  I've never seen this before, and it also doesn't appear in my other examples I've looked at (including the one below).

Steve, I had also thought of the secondary shadow.  It's in the right location in the original frame.  However, I've never seen this before.  The only difference here is that I used the IR 742nm filter, and previously have only done these stretches with images taken with the 610nm filter, or with my green filter.  The IR filter is new and very clean, and the flats that I did take (despite camera rotation) showed no shadow.  Weird.

Last year I posted about detecting Earthshine from a "normal" exposure.  That post is here:

At the time, I was happy just to detect the outline of the limb from that same exposure as the sunlit side.  And I could barely detect the albedo feature corresponding to Aristarchus.  However, try as I might, Photoshop could not do any better than this.  I just loaded the raw image into RawTherapee, and applied the gamma 1.0 transformation to RTv4_sRGB.  The initial result is below, and doesn't look too remarkable, other than being perhaps a decent (but slightly washed out) natural rendition of the Moon.  If you adjust the curves back down you can get a very nice result.  However, there are also now loads of data buried in the shadows, as you can see from the extreme stretch below that.  And, no black hole in the center!  That is still puzzling me.  Is it related to the IR filter, or just bad luck or coincidence?  Don't know. 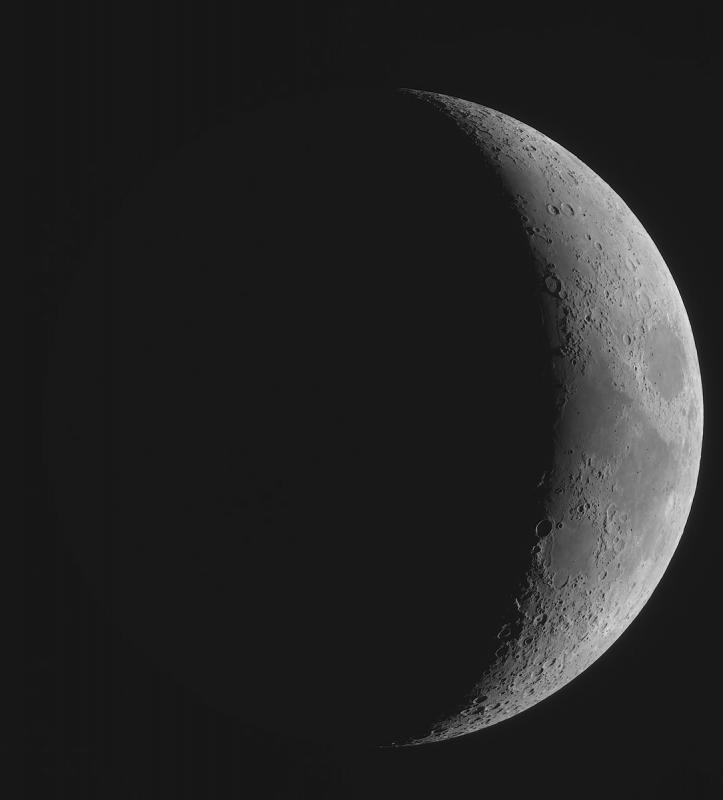 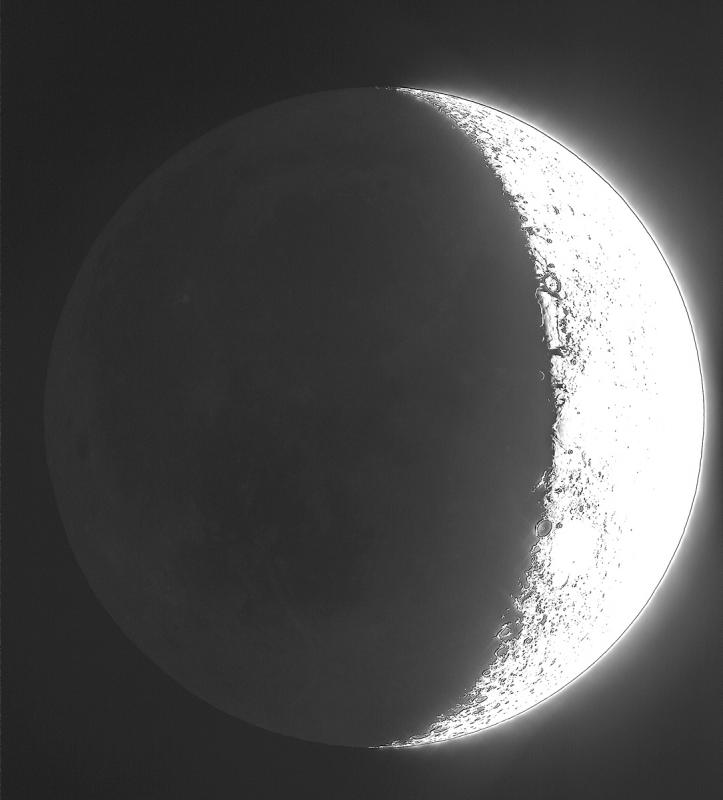 Hmmm ... definitely sounds like that filter might be worth a look/variable test. New and clean though it may be, could it possibly be optically flawed? Fingers crossed that's not the case.

Hmmm ... definitely sounds like that filter might be worth a look/variable test. New and clean though it may be, could it possibly be optically flawed? Fingers crossed that's not the case.

Darren, a problem with the filter is a definite possibility, considering that everything else in the setup was identical, and I can't find such a defect in any of my other images (such as the one above for which I also did not use flat frames).  Certainly this type of image stretching will test any slight imperfection in illumination, but the image above was processed identically, with no black hole.  My 610nm pass filter and my green bandpass filter are both Baader, but the 742nm is Astronomik.  Worst case scenario is that it end up being a 50 dollar mistake I suppose. Although it still works in general, such as the image linked below.  That was my first time using it, but that wasn't a challenging processing job.

Just as a followup to this, I have discovered that the "black hole" I referenced in my extreme stretched image, is in fact the shadow of the secondary mirror.  I setup again the other night, and if I cranked the exposure I could easily see the secondary shadow, and the spider vanes, in the live view of Firecapture.  I slewed the scope around the Moon and could see the shadow easily, both over the Earthshine regions as well as the background sky if slewing off the Moon. In fact, I could still see the secondary shadow if I slewed to about 2 degrees away from the Moon.  Clearly this results from some internal reflections in the Newtonian.  And curiously, it is nowhere to be seen in a flat calibration frame, so it is very specific to cranking the exposure on the bright Moon.  Why it didn't appear in my image in post #7 is unclear, but that lunar phase was more advanced, with Earthshine details buried even closer to the noise floor, so perhaps the shadow is just lost there.  Whereas in the smaller crescent phase that produced the image in post #2, the Earthshine details are slightly elevated above background sky.  As I said at the outset, these are not the way you would set out to capture Earthshine details, but I find the amount of detail buried in the raw files to be surprising.