Here is my idea for the integrated finder scope design, which could allow quick switching of the magnification using a single fixed EP drastically from the wide finding FOV (like 7 deg) to the observing magnitude. With some ideas for automation:

The easiest implementation is a manual telescoping (in/out) secondary holder: 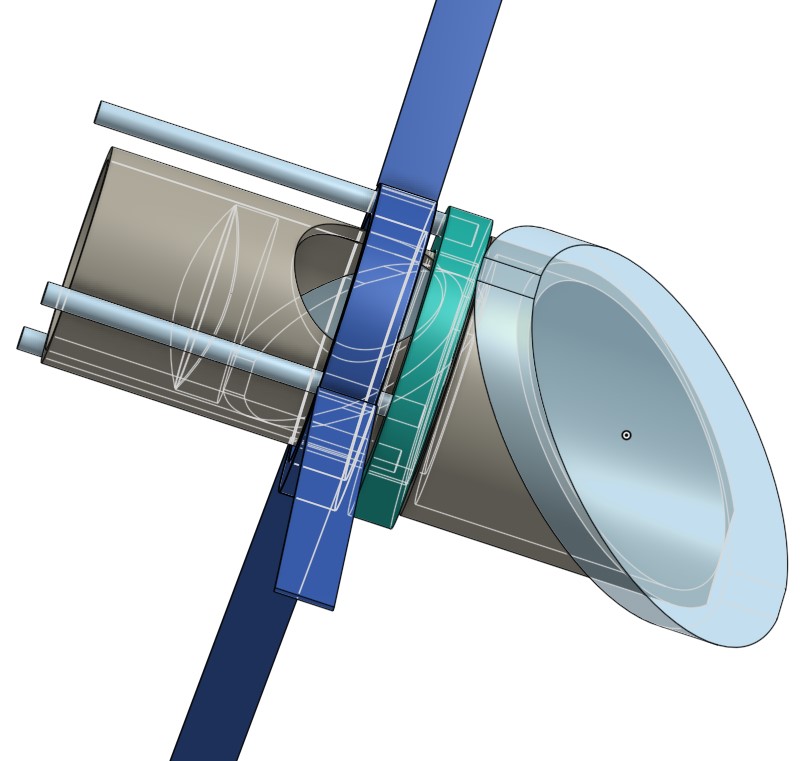 The grey mirror holder is sliding up/down in the green ring. Sky-blue rods are collimation screws rocking the green ring in the blue spider's ring. The secondary's holder positioning precision could be provided by a co-axial grove and strong magnets (not pictured as well as the opposite slider's stopper. 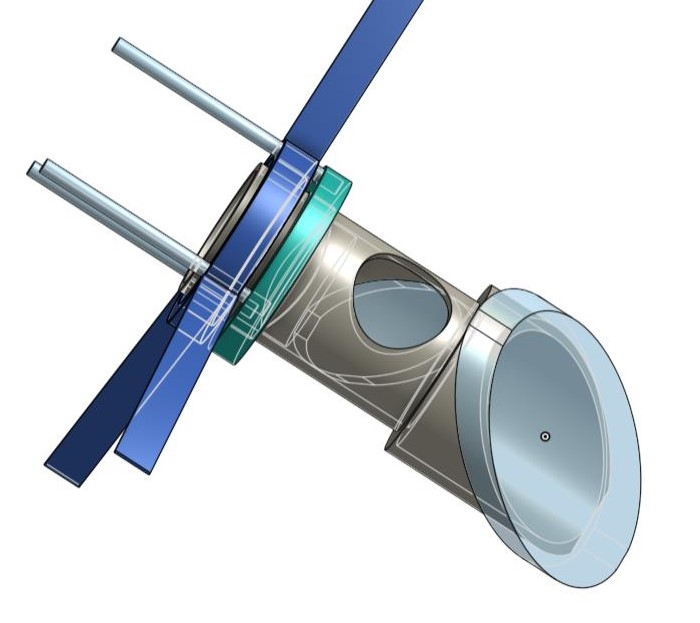 There are still plenty of issues to address for the mirror positions repeatability, but it  looks rather easy to make and could work in a smallish scope (you don't want too long a focus for the finder scope). Instead of the forward mirror it should be OK to fit a roof prism there (for RACI functionality) for the price of reducing the aperture. Plenty of very fine machining involved (not pictured) indeed, so it's easy, but not cheap.

For the motorization, instead of moving the secondary holder in a sleeve, we could move a ring with vanes attached, along UTA walls exposing the finder hole or secondary's center to the EP optical axis. That's how my 3D printer moves its caret up and down with quite a high precision. That means 3 threaded rods on the walls of the UTA with 3 stepper motors (like on the right image, but synchronously and with the motors like on the left one 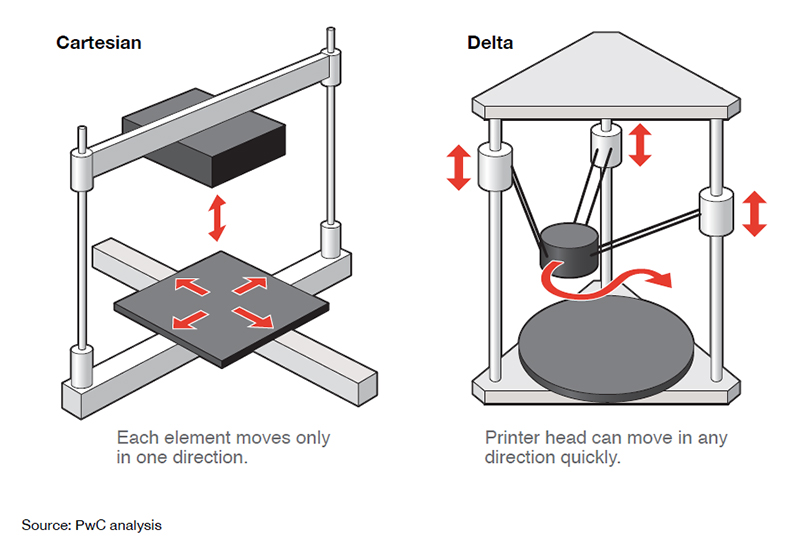 (e.g. to compensate for the gravity shifts of a heavy secondary in a 40"-er).

Note that these are just abstract ideas. The viability of such a finder design for some practical problem solving is obscure to me. But I'm claiming the copyright on my design ideas here. You are free to use them for personal DIY projects but not for business projects without my direct permission, OK?

Possible rationales (I can't vouch these are actually legit or significant, again just o.t.t.o.m.h, so those using an optical finder, please, feel free to chime in, I'm a Telrad-only guy lately):

Thanks! Sure, that's another good option indeed. But it needs to be tried in the real life, as too long a secondary cage (to allow for the convenient eye positioning away from the main EP) might cause collimation issues, or the location of the finder EP might be too high and/or awkward to use, or that's too much weight, etc).

Aside from the added cost and the additional required mechanical precision, I don't know if you have thought about the following three issues:

The internal "finder" objective lens axis will have to be accurately aligned (coincident) with primary mirror axis. This means the secondary mirror has to be mounted with the accurate offset.

After major recollimation, the traditional finder scope might have to be readjusted since the primary mirror axis could pointing in a slightly different direction. It is easy to realigned the traditional scope. I suspect a similar adjustment mechanism will be needed for your idea. It is possible to add adjustment screws for the internal finder objective lens but that will impact the quality of the view since both the EP and finder objective lens will be misaligned. In a traditional finder scope, both will always be aligned. 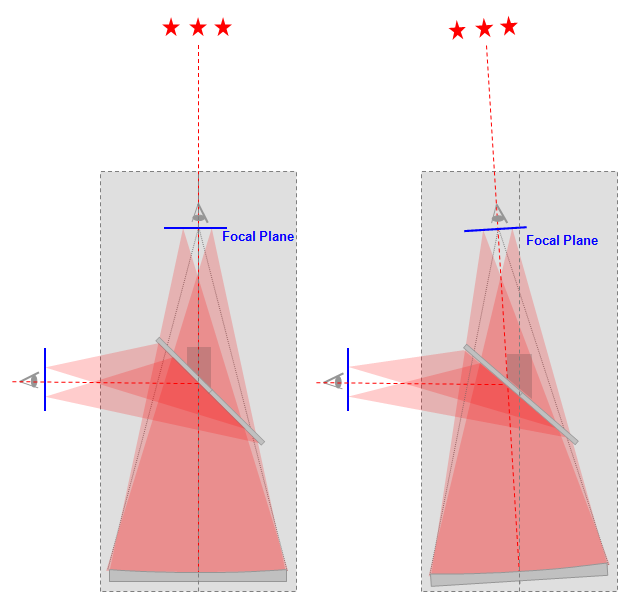 Switching back-and-forth between the finder and the observing modes will require the observer to refocus back-and-forth. It would be very unlikely for both the finder lens and the primary mirror focal planes to be precisely coincident. I believe this will be a major inconvenience. Many might find the inconvenience of switching back and forth between a traditional finder and a focused image via EP is less than keep fiddling with the focuser.

The added height and width to the assembly above the secondary mirror could block light from the periphery stars. This could be a minor issue but still worth bringing it up.

But how would that be different from just using a traditional finder scope? In both scenarios the observer will have to move his/her eye from one EP to another EP. That is, both scenarios will be almost identical from the an observer's experience perspective. So why would you add complexity and cost to a new implementation when it will not improve the observer's experience?

The final implementation of this idea will sound appealing if:

1- Does not be require to switch eyepieces.

3- Does not require repetitive refocusing

4- Does not add a major cost to the scope

Otherwise the idea will lose its competitive edge against the traditional ideas of either using a finder scope or switching between a low mag EP and the intended EP.

Finderscopes need to have cross hairs and/or a reticule to be effective. Since these must be placed at the focal plane of the eyepiece, that means using one eyepiece for both finding observing and observing has real obstacles.

These days, those who star hop are fewer and fewer. I also think that those who do are very likely to be on The K.I.S.S. (1st rule of engineering: Keep It Simple Stupid) side of things. Dobs are inherently simple and that's a big part of their appeal..

The question engineers Ask first: What problems are we solving, why are we doing This?

I have yet to see a reason that justifies the added complication.

Thank you, Gents. Very insightful review. I see no serious viability in such a finder either, but let me try to play the "good cop" here

For the crosshairs I'm poking an idea for a while to use a holographic laser "diffuser" and try projecting a tiny enough red dot through the objective of a telescope simulating a star. That's similar to the Telrad collimator but with the reticle on a nano scale. For a low magnification finder it should be even easier. In a nutshell that should provide an artificial star in the finder's FOV which you can turn on/off as needed (and if it's only in the finder, it will be gone from the primary FOV). Just got two tiny laser modules (3x5mm) in the mail.

The FOV vignetting. My draft is very basic. But I can see that the issue can be mitigated to good extent by drafting the "handle" out a bit. In a worst case, by reducing the finder's aperture, or/and moving its objective farther out. The latter adds to the focal range though.

Regarding the alignment. That's the most tricky one. For the crosshairs' alignment, I can see a simple stick-manipulator mechanism for moving the laser artificial star around the FOV. But the optical train's alignment is definitely hard to achieve, especially if it's needed every outing. In practice, it is possible to pre-align the secondary and the roof prism (let's replace the finder's mirror with the prism to ease distinguishing between the two), so their surfaces are creating a perfect "axis splitter": 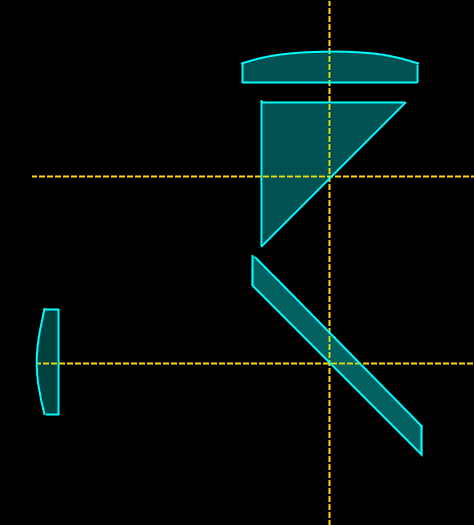 As the scopes collimation guru, Jason, can you see a method of manually aligning that rigid block as a whole (with three screws of the secondary only) so everything works?

Perhaps, it might be possible to leverage the finder's reticle (fake star above) perfectly centered on the axis too and a dedicated high power alignment EP with the static reticle to align the secondary module first so the finder works and the secondary is in the perfect alignment with the EP automatically, then tweak the primary to align with the rest?

As the scopes collimation guru, Jason, can you see a method of manually aligning that rigid block as a whole (with three screws of the secondary only) so everything works?

2- The secondary mirror will have to be mounted with the proper offset. That will ensure the primary mirror axis is almost coincident with the finder objective lens axis.

3- The finder objective lens will need 3 adjustment set screws. You will need to adjust the lens to align the finder FOV with the scope's FOV. This step might degrade the quality of the finder view since the focal point of the objective lens might end up slightly off-center with the EP axis. This might be acceptable since the view quality via the finder scope does not have to be of high quality.