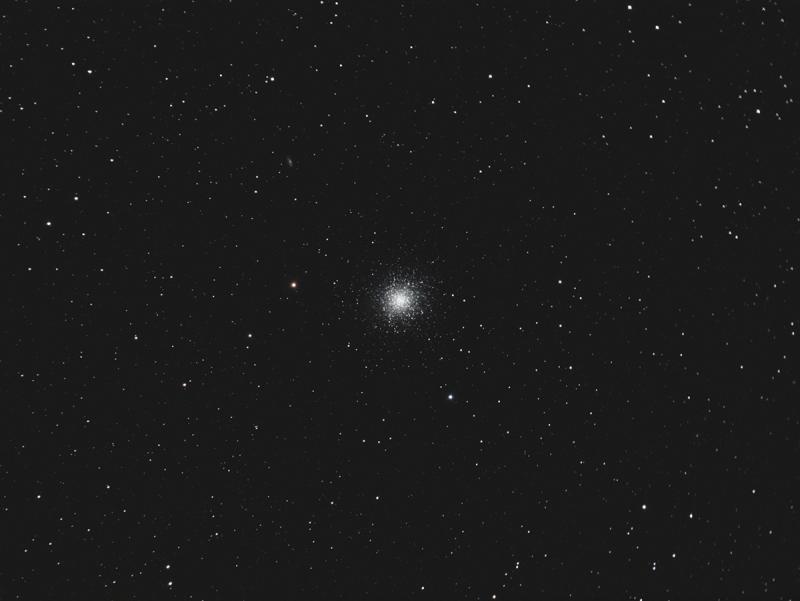 This was the 5th of 6 test images taken to evaluate the use of a Baader Mk III MPCC with this fast f/3.6 Schmidt. The wide field offered by this telescope does a good job showing deep sky objects in context with the surrounding sky.  I was a little concerned how the MPCC would work with globular clusters as prior work with this coma corrector showed that it tends to soften the center of the field a tad. However, the Comet Tracker is not a high resolution scope anyway so I was hoping that this effect wouldn’t be too bad, and it wasn’t! In fact, I couldn’t be happier with the resolution at the center of the field.

Globular clusters are relics of the ancient universe and M13 is no exception with an estimated age of 12 billion years. Their great age is an indication of their unusual stability. One consequence of this stability is that any heavy elements that their stars have made remains buried in their cores and the cluster itself has little, if any, interstellar dust. M13 is one of the few globular clusters with a dust-like feature that can be seen as a dark lane extending to the lower left of the core. It is possible that this dust lane is not really associated with M13, but instead is an independent object that just happens to be in front of the cluster.

Good image of the "Great Globular" of the northern skies! Thank you for sharing.

very pretty. the stars are very clear and sharp.
thank you and well done.

Great sharp image. Both M13 and M3 are great targets. I took a one shot only of 60 secs once ,last year. It was amazing how nice it turned out and i had luck, i got it sharp....