The April 2020 Challenge is now open. The target is NGC 2903 a barred spiral galaxy in Leo. To reduce the number of stickies, please submit your entry to this thread.

To increase participation over such a diverse group, the winner will be selected by random drawing. Please feel free to start a thread requesting guidance on your entry prior to submitting it, the whole purpose of this challenge is to learn and compare on a common target. Entries must be submitted by midnight eastern time on April 30, and I will try to announce the winner sometime on May 1.

I had imaged NGC 2903 on March 3 of this year.  The moon(73% illuminated) was at an 80 degree angle, so some moonlight was coming into the reflector opening, which was  likely to cause a reflection.  A piece of cardboard and a bungie fixed that problem.  This is about 2.5 hrs of RGB at binx2 with the ASI183 camera and a 8 inch f/4 reflector.  The mount used was a CEM60 guided.  Stacked in DSS and developed in Star Tools and Gimp. 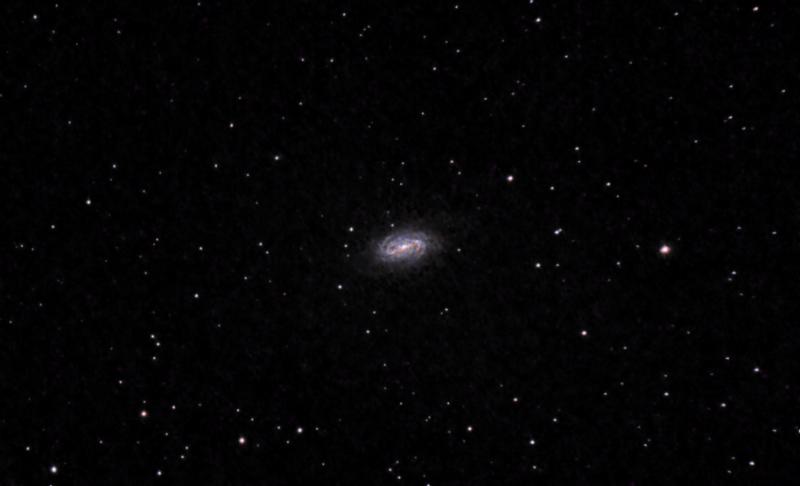 I did it last night under some moderately clear skies, which, unfortunately, clouded up after an hour.

After a month of cloudy skies, March was a wash, it was nice to get out again again.

Would be a nice little target...if it wasn't next to a pink moon.

Heavily cropped. No love for the 80's lately.

Here's my attempt and first submission for one of these.

Processed with Siril and GIMP.  Not quite four hours in bad light pollution.

Here is my shot taken and processed 22 March 2020 (less than a year after my first successful stacking attempt).

Made from 102 subs 15 seconds each at 4000 ISO through my Nexstar Evolution 8 (Celestron 8” SCT with 0.6x Corrector reducer). My camera is a Sony A7iii. The mount is Alt/Azimuth with no wedge so the subs are short to avoid field rotation. Also, I have no guiding beyond the goto, so tracking accuracy is also problematic if I go longer.

Stacked on DSS and lightly processed on Capture One, then more on iPhone.

Uploaded version slightly nobbled to get under 500kb limit. 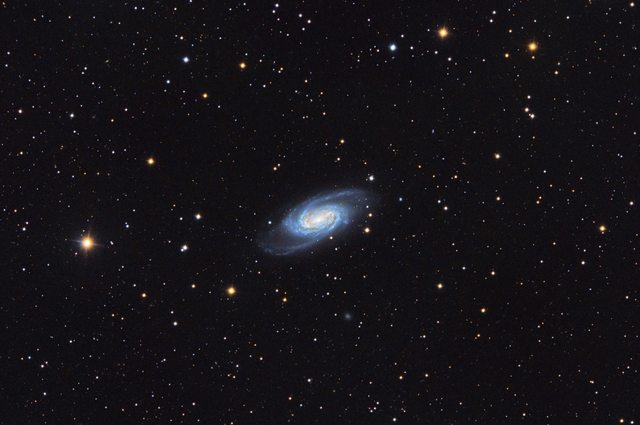 Just a little smaller than our own Milky Way, NGC 2903 is a barred spiral Galaxy 20 million light-years distant in the constellation Leo.

Here's my first go at this forum.  This is a preliminary image generated from data collected Thursday, April 16 from my backyard in the badly light-polluted Vancouver area.  Not a big fan of the colours and will fiddle with it over the next while.  I've got another 200 light frames to attempt to apply, however, the mount wasn't tracking too well when I took them.

The particulars are as follows: 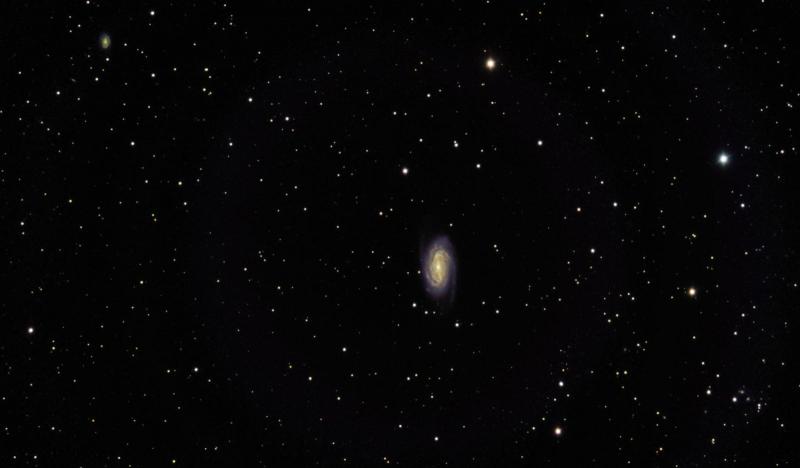 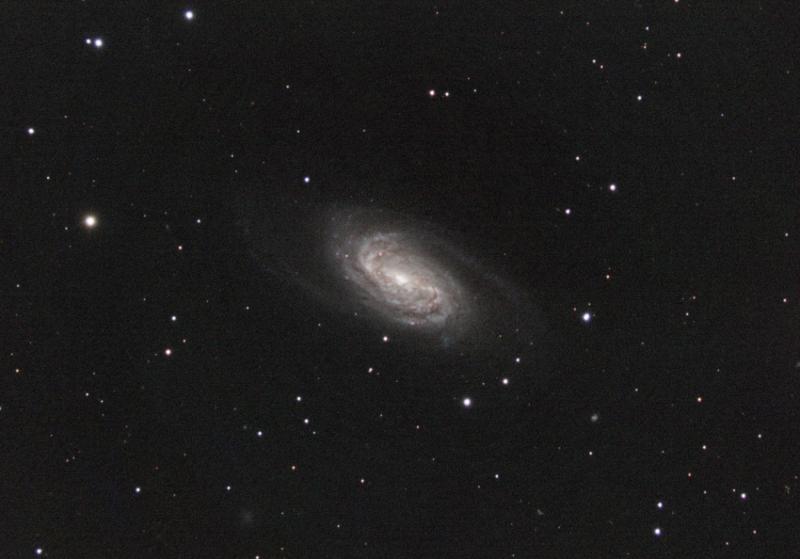 I know it is pretty bad, but I was working off of a malfunctioning mount last night. 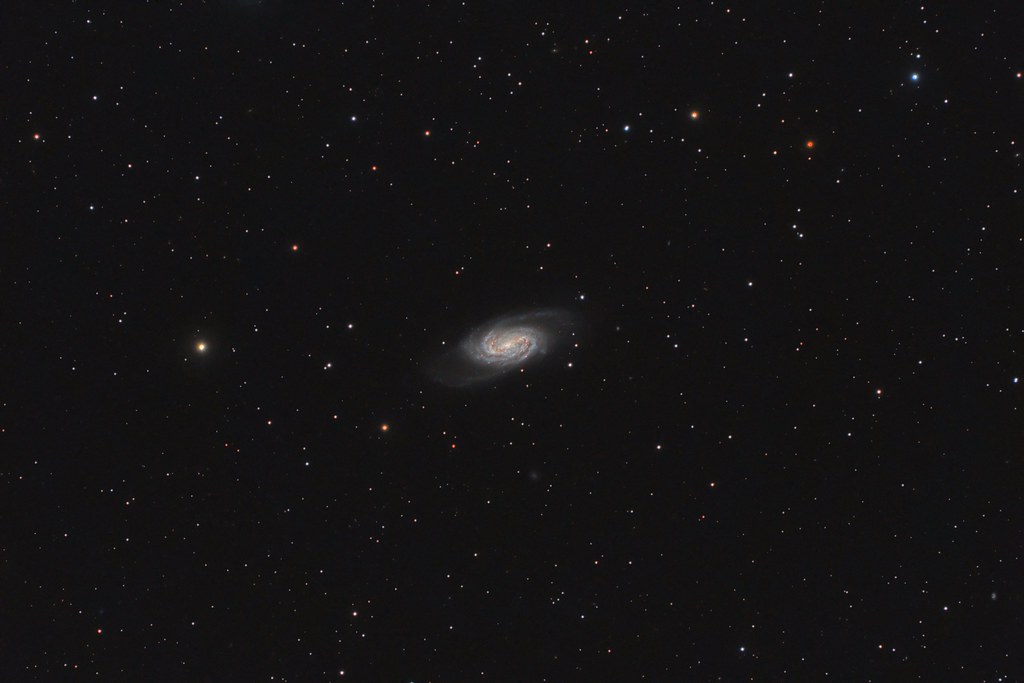 More details on the Astrobin page: 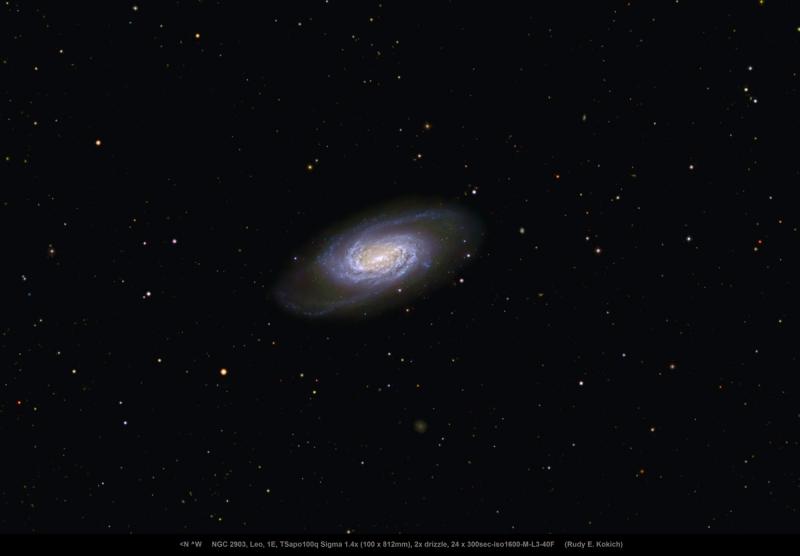 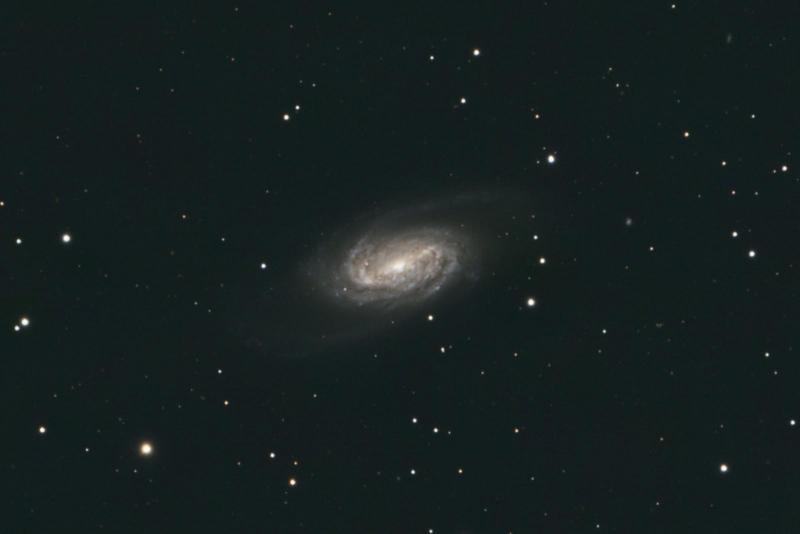 Here's my submission for this month: 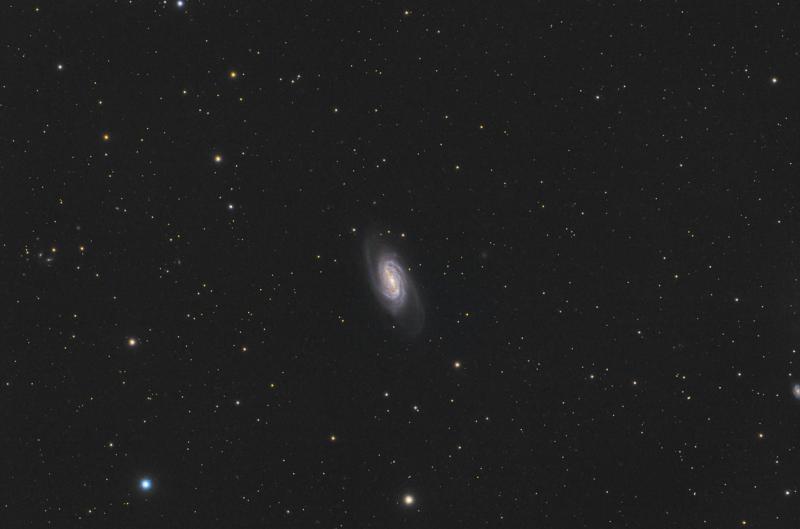 Here's my first submission to these monthly challenges. 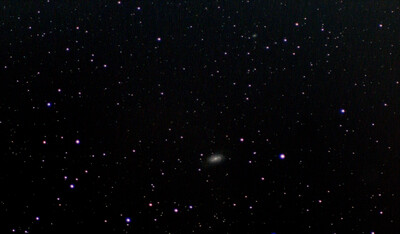 The structure and color in this galaxy made it a great target opportunity to test the 268C.For the camera I used an gain of 27 and an offset of 65

My main concern was that my image scale (0.63 arcsec/pixel) was going to be a challenge for guiding but my MX+ was up to the task over the 6 night of data capture. Guiding was averaging around 0.5 arc sec/px. A coastal marine layer, dew everywhere, and messed up flat frames all contributed to noise and the blotchy background. Big thanks to Ron Brecher (AstroDoc) for his expertise in getting the best out of this data.

image was cropped about 50% 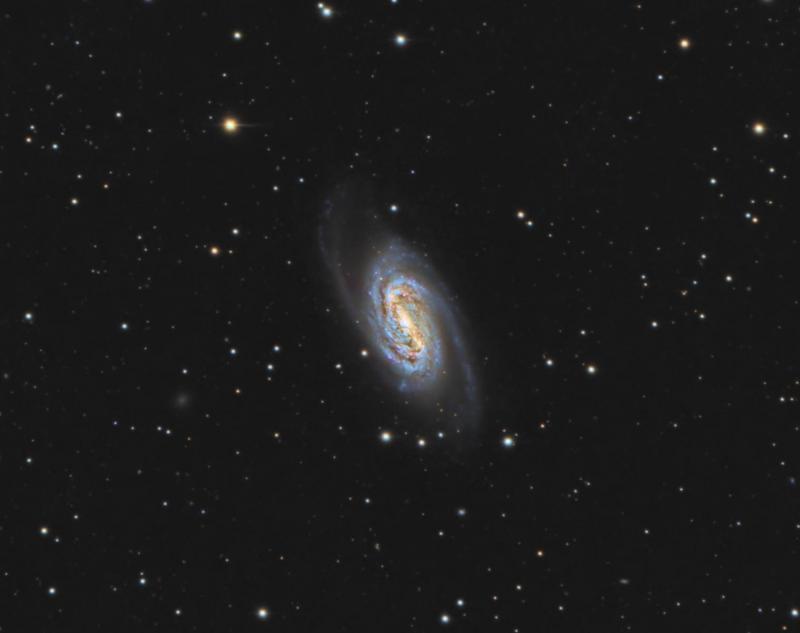 This is 2 evenings worth of imaging, for a total of a little over 1.5 hrs of net integration.  Moon on both sides of marginal weather limited imaging time.  It could certainly use more time on target, but at least this month the target was a good match for the camera and scope (thanks!).

It would also help if DSS would tell me what was wrong with the nearly 50 subs it threw out, so I could try to fix the cause.  I'm guessing bad stars (aka life with an AVX), but haven't tried flipping through the 261 offered subs to locate them.  I tried stacking all 261 in Sequator, and that improved the detail a bit, but it ended up with a blotchy gradient that StarTools couldn't deal with very well.  I'm guessing that's due to Sequator using Flats (aka Vignettes) but not calibrating them with Dark-Flats.  I may try making a master flat with DSS, and feeding that into Sequator.  But other than the missing subs, DSS behaved itself this month in making a nice clean stack.

As usual, the background has a "nice" pattern noise due to not dithering.  That will have to wait for a computer-controlled camera, so that CCDciel can sync the imaging and dithering operations.

Stacked in DSS, processed in StarTools.  Cropped to about 65% of original size.

The beginning of April was absent clear nights however the latter half of the month provided multiple imaging opportunities enabling my submission.

My image was captured on April 13,14,15,21,23,26 and 27. NGC2903 was slipping below my artificial horizon by midnight so I did not have much astronomical dark time available for this target per night. 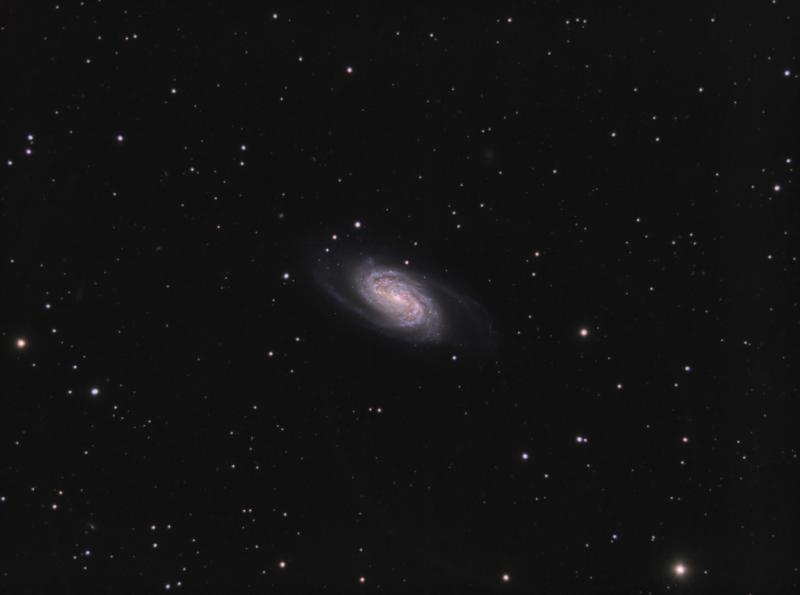 Throwing my hat in the ring for this one. In taking this one, the Luminance went ok, then when it came time to run the color filters: Red did ok, Green snagged the guide cable on the mount and I lost alignment, Blue was re-aligned but the garage started to eclipse the galaxy. Then I was waiting all the rest of the month to get the color data, but have had cloudy nights since. At least the Luminance turned out ok in my book. The processing was basic, I may go back and try and get and add the color at a later time. 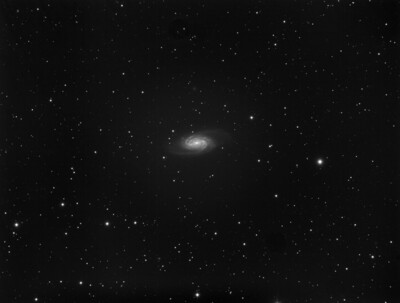 The winner of this months challenge is TelescopeGreg! Post #19

Thanks everyone for participating. I'll put up this months challenge soon.

Looking forward to finding out what TelescopeGreg picks for May.