Hi everyone - normally I'd be a couple of days taking my time to process the images we captured yesterday morning from our backyard...quite reasonable seeing in the circumstances (always wishing for more!

) although it was a short session where we didn't get up till 6am.

Targeted Jove first for the first time this year as it is now appreciably higher than Mars...after about a half-dozen captures before quickly turning to Mars & then back to Jove for a couple more captures: Saturn missed out due to the late arising & our ageing bodies trying to take it a bit more easy nowadays.

Seeing was quite decent with the onscreen images alternating between quite steady & what we term "fizzing" where the detail cycles between fairly clear & fuzzy - but today's cameras with their fast frame-rates help to overcome this situation to a good degree. 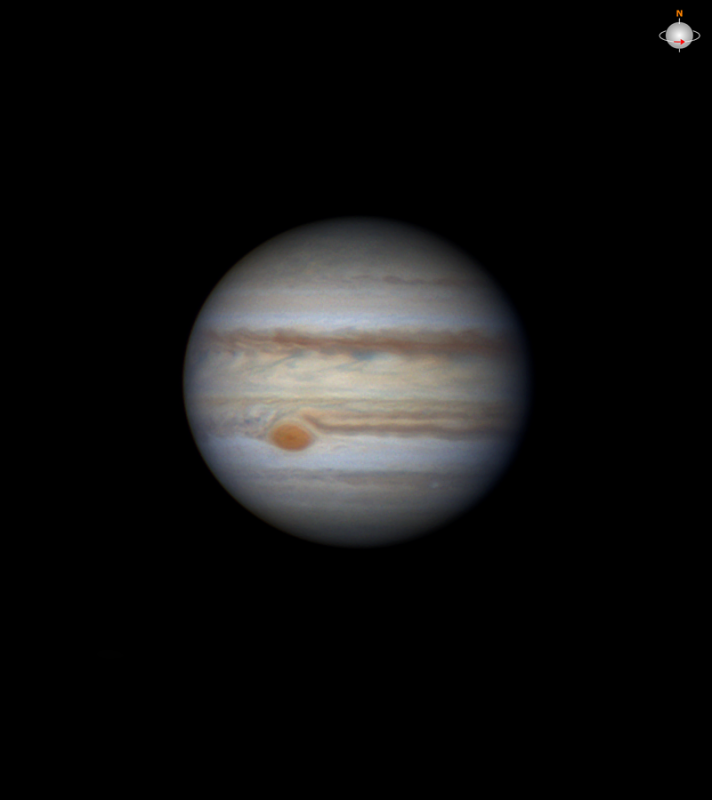 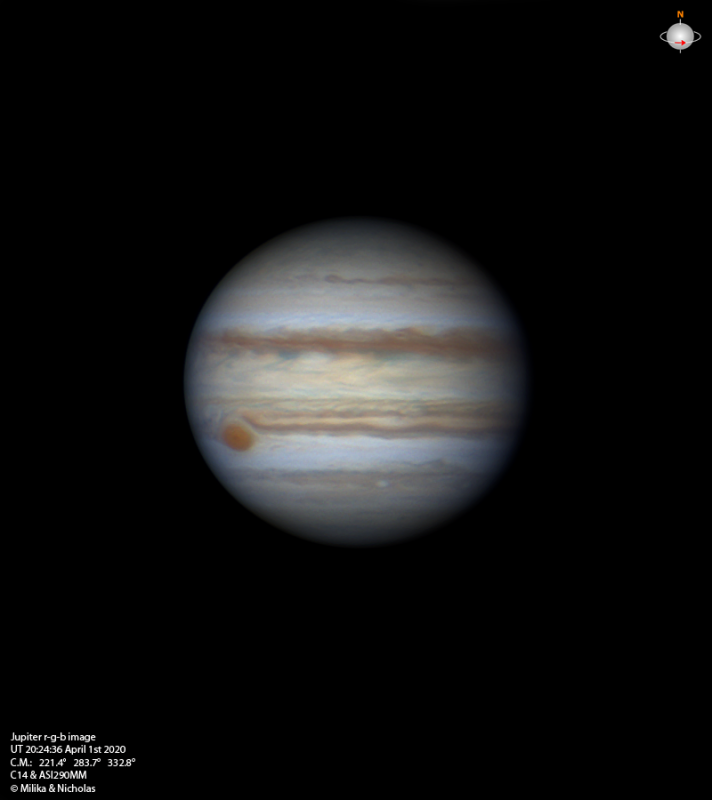 ...the mono channels from the later Joves & the rgb Mars between the first & last lot of Jovian captures... 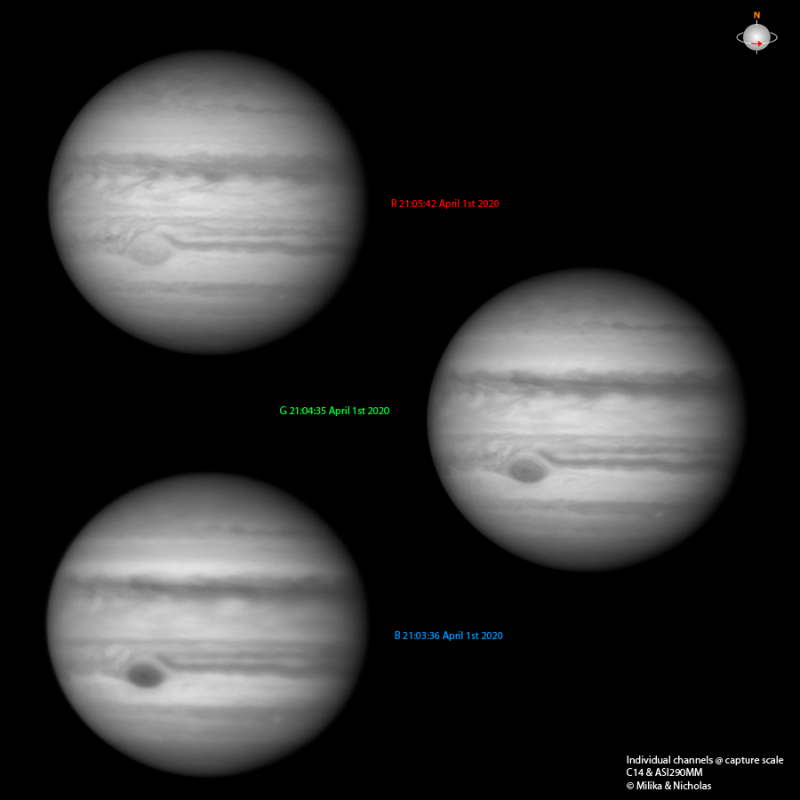 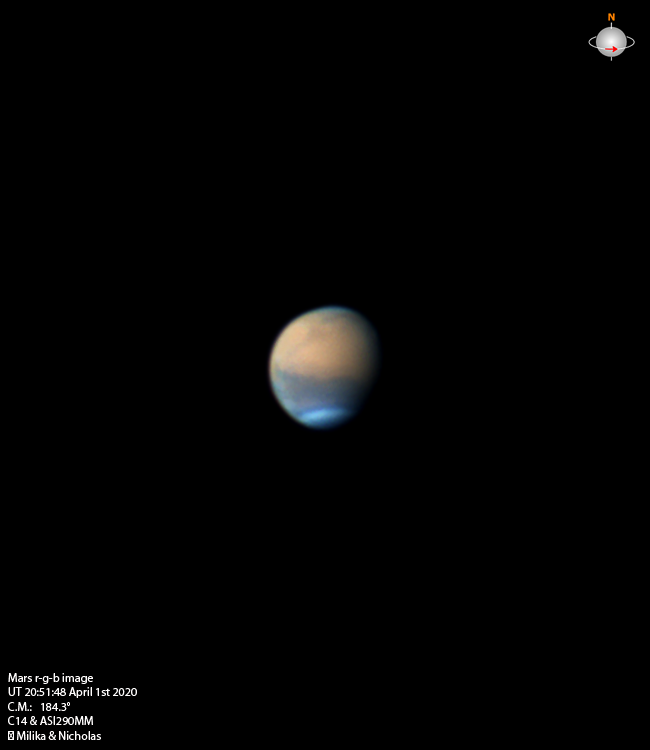 Thank you as well for posting the RGB channels.

Being just a visual guy, I take for the Jupiter the band-pass color filters to see better the specific details. And the astrophotos, like yours, are a very helpful guide.

"Fizzing" seems to describe what I've been experiencing a lot lately - will have to remember that technical term.

Those are fine captures for this point in the season Darryl!  I really like the ice showing on the south pole of Mars.

Thanks fellas & for all those "Likers" out there!

Well, being honest there's no real descriptors for seeing beyond "fast" or "slow" which really describe nothing Darren...& over the years we've seen an enormous range of "types" which we give different descriptions to.

"Fizzers" describes a type of effervescence (that old Schweppes spiel) where everything onscreen appears reasonable then appears to fizz or go blurry to varying degrees with an on & off frequency - for sometimes shorter & sometimes longer periods, but always switching back & forth...

They are usually characterised by the type of analysis graph in AS!3 shown below - considering that this was the graph from the best capture in the red filter from this session you can still see the "spidery" nature of it - perhaps you'd prefer "spidery seeing"..?!?

For the last 1/3 of the capture you can see there was a bit more consistency in the quality than earlier: the blue channel was the poorest for that morning as it usually is but without that "fizzing" I think we would have been "extremely satisfied" instead of "pretty satisfied" for this early in the apparition - you work out the variations in those!

I'll post the last capture from this session - an ir610nm one - later today...& perhaps some individual channels for Mars later as well.

Wow! I am in awe. Our seeing/cloud cover in Virginia USA has been awful for about two months now. You encourage me to get out there and make it happen.

Well, being honest there's no real descriptors for seeing beyond "fast" or "slow" which really describe nothing Darren...& over the years we've seen an enormous range of "types" which we give different descriptions to.

Yup, I hear you re: there being no "real" descriptors ... but I sometimes have trouble explaining when I felt the seeing was overall not great, despite having grab some decent frames. "Fizzing" is quite common for me here, and it can be pretty extreme! (Makes it very hard to judge focus sometimes.)

This morning was a great example: aside from the fizzing, I would have described the seeing as good bordering on excellent. But at the end of the day I had to chuck more frames in the bin than I would have liked to, and for me that's what my overall seeing assessment comes down to: having enough usable frames to control the noise.

One of the rare occasions where something fizzy spoils the party?

Thanks Ron, & for all those "Likes" also from folks!

Here's the single filter captures for the Mars from this session at 200% of capture scale as well as at capture scale (100%) to show just how small Mars is still atm. 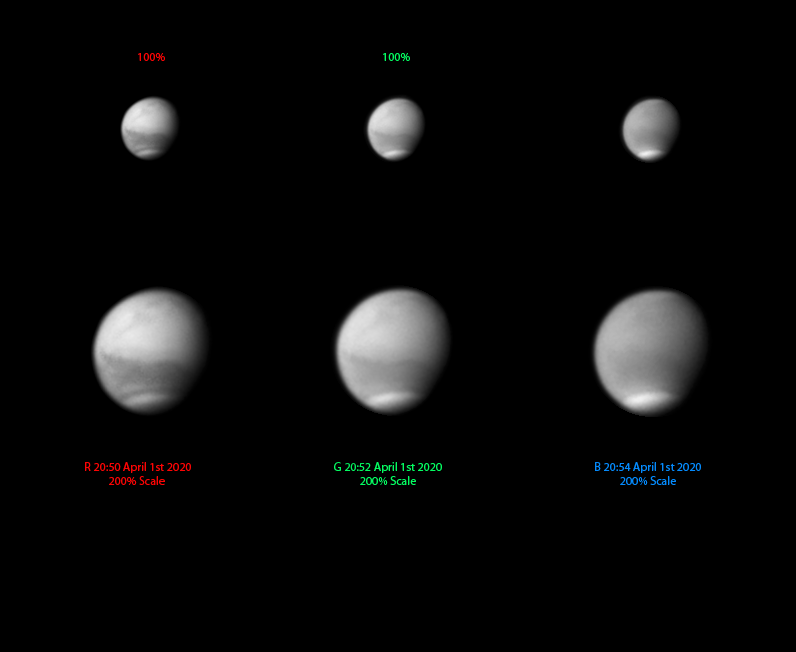