When is the next libation in which Orientale crater will be in maximum possible view from Earth?

It depends on what you mean by "maximum possible".  Mare Orientale is fairly close to the equator (about 20 degrees south), which makes libration in longitude the chief determinant of viewing angle.  Although libration in longitude cycles through maximum values to the east and west each anomalistic month (27.55 days) the absolute values vary in strength from month to month, with some months having more extreme values than others.  This is because maximum libration in longitude occurs at approximately the mid point between apogee and perigee of the lunar orbit, and those values themselves vary depending on whether the Moon is lined up with the Earth and Sun (such as full or new moons).

A maximum possible libration for Mare Orientale, when accounting for libration in both longitude and latitude, can get as high as >9 degrees, but that is rare.  However, you don't need a maximum possible value to see many features of the region.  Even just a few degrees of favorable libration in longitude (negative values, to the west) are helpful to see some of the features approaching the Orientale Basin.  I would estimate that a libration of about 5 degrees (combined effects of lat and long)  is required to actually start to see some of the Mare floor itself.  I made a post last year with a few images of the region during one such libration.  This occurred with about 7 degrees of libration in longitude, but libration in latitude was in the wrong direction, and so the joint effect was only about a 5 degree favorable libration.  Nevertheless, much was visible.

Below are two tables, that take us through the end of 2021, and indicate time periods in which the total libration for the Orientale region will be greater than 5 degrees.  This doesn't mean you can't view the area at other times, but it will be most favorable at these times.  Note that there is a favorable "season" coming up this fall, as well as next fall.  Some of the libations in these periods will be quite strong.  The list is organized by dates, with each cluster of dates having a start and stop period, in which the Moon meets the 5 degree criteria.  You will have to take note of the lunar phase, because not all dates listed will be easily viewed.  The table is best used for planning in conjunction with another lunar calendar. 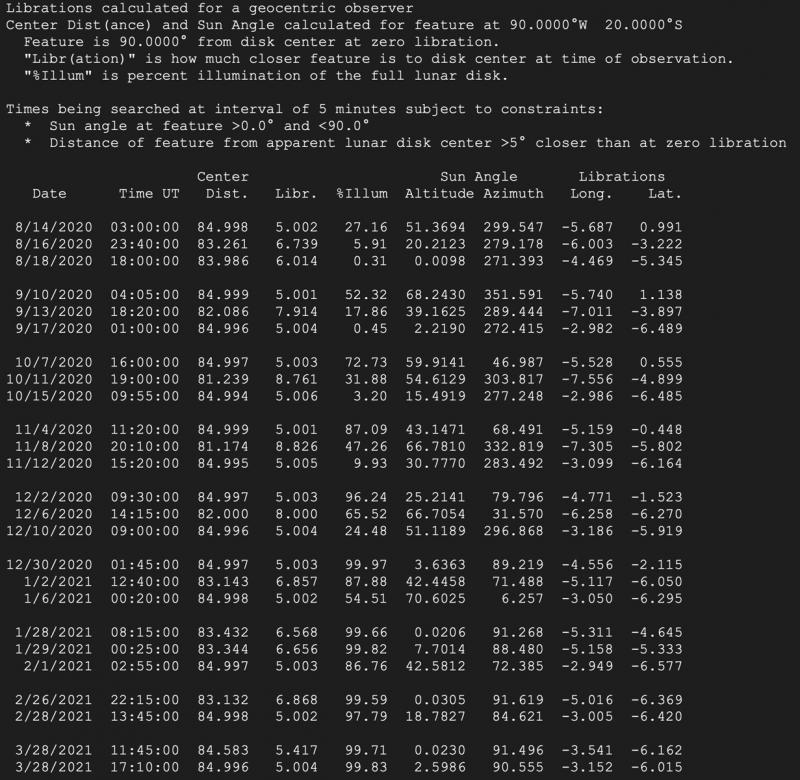 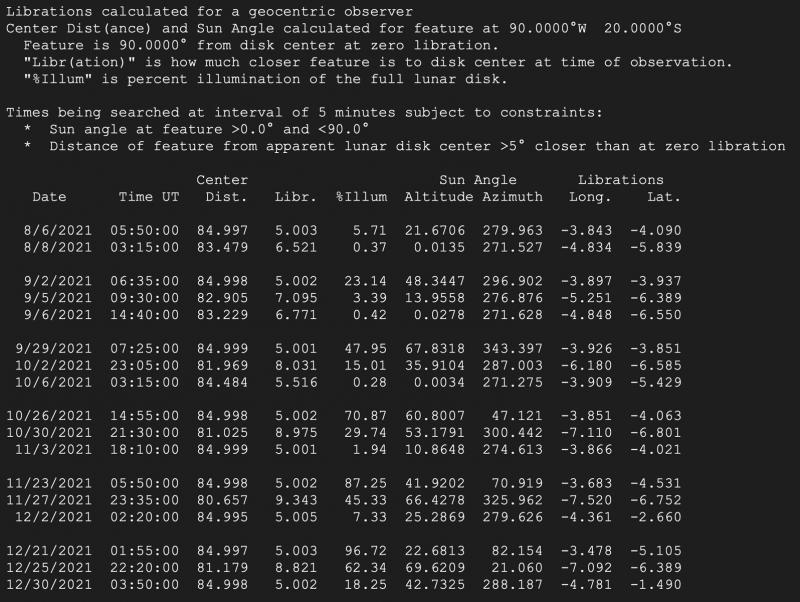 That is exactly what I was looking for. Thank you so much!!