Blast from the Past: Add Your Amazing Photo! 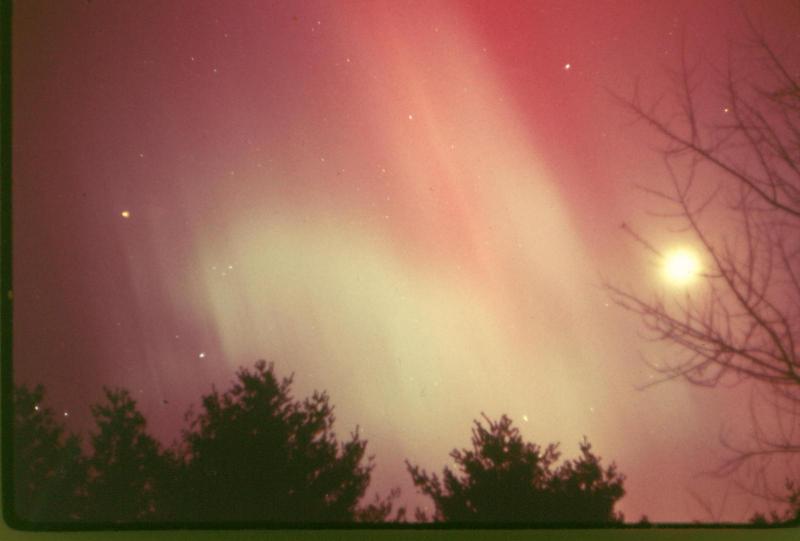 And if I may interject one more... my all-time favorite... the Aurora Borealis of 23 March 1969.  This was unexpected; I was out to shoot the crescent moon and initially I thought some cirrus clouds were creeping in... until they turned pink and red, and were streaming about in a manner unlike clouds... herein I realized I'm seeing my first-ever aurora.

Fortunately, I had High-Speed Ektachrome slide-film in my camera.  Abandoned lunar photography and mounted camera on tripod with 50mm F/1.8 lens and shot a bunch of 20-sec exposures... east, west, overhead.  Had Kodak push from ASA160 to 400.  This was the most scenic pic of the bunch... looking west, Orion at left (setting into the pine trees) and the overexposed crescent moon at right.  51 years later, still a memorable eve.

Curious if anyone has a pic over dozen years ago when a comet arrowed thru M57 Ring Nebula? Was quite a Visual!

Very tasty with my morning coffee.... Thanks!!

Sunrise sun column from our home in Brownstown, PA outside of Lancaster, PA on 2-25-2002 (you can see the sun column in the image, but it was much more apparent by eye

!! You can also see the roof of the nearby farm there on the horizon...I loved living in Lancaster County PA!!) 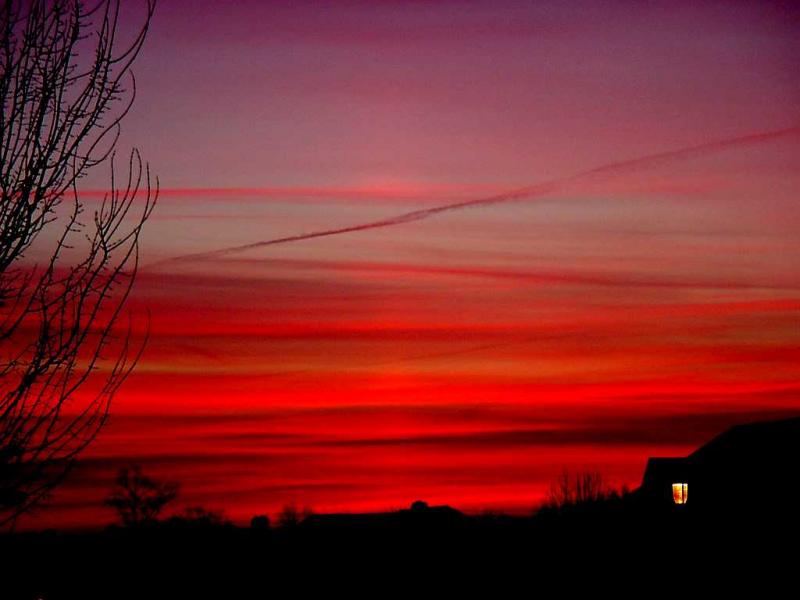 From outside Lancaster, PA on 6-17-2003 while driving to work (I know, you really shouldn't be taking pictures while driving...). I noticed how prettily and peacefully the Moon was being cradled in the clouds. This is one of my all-time favorite pictures! 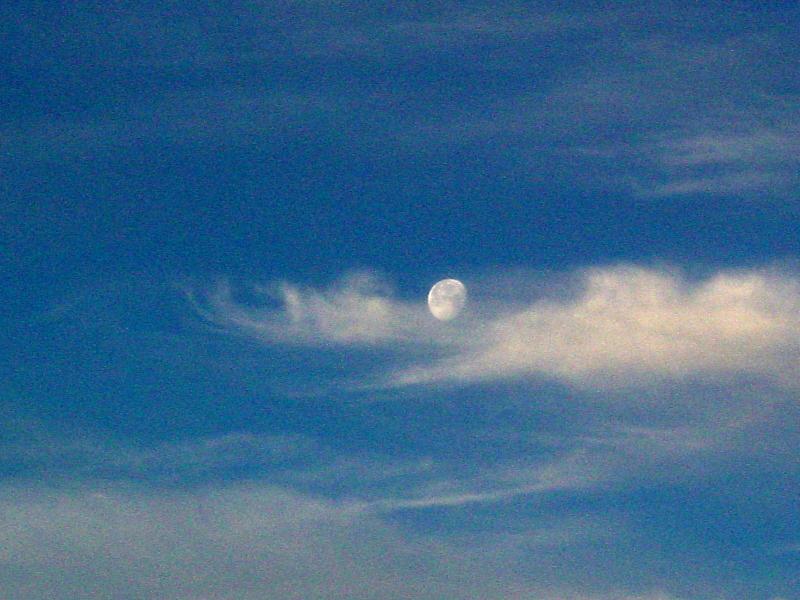 There were a number of auroral displays visible in Pennsylvania during the early 2000s.  Here's one of the film photographs that I took on the final night of the 2002 Black Forest Star Party at Cherry Springs State Park.  The camera used was a Pentax K1000 SLR with a 50mm lens and the exposure was 15 seconds.

This was the brightest and most spectacular auroral display that I've ever witnessed.

I was observing at a dark site in the Tuscarora State Forest on 11/20/2003 when this auroral display took place.  It was also shot with a Pentax K1000 SLR and a 50mm Pentax lens and the exposure was also 15 seconds.  The bright object at the upper right is Mars.

I took this photograph of an auroral display from the Naylor Observatory in November of 2001 using the same film camera, lens, and exposure time.

An auroral display in the spring of 2002 obscured the Big Dipper.  I took this shot from a park close to where I lived at the time using the Pentax camera and an exposure time of 15 seconds.

This from long ago. Jupiter in Sagittarius. The original is on 4x5 negative sheet film and very highly resolved.    Tom

These two from probably in 1969, when I was 14 years old, an occultation of the Pleaides by the Moon. This was my first ocultation. I had a darkroom in the garage and push processed the Tri-X Pan to ASA 1600 by counting seconds to IIRC 15 minutes. These images are captures of the original pictures that I still have!

From 4-28-03: I thought this was somehow surreal what with the juxtaposition of technology (crane, lamppost light) with natural (dawn colors, astronomical objects). I don't know....maybe just me...

Anyway, the Moon and Venus from my former home in Brownstown, PA (outside Lancaster, PA). 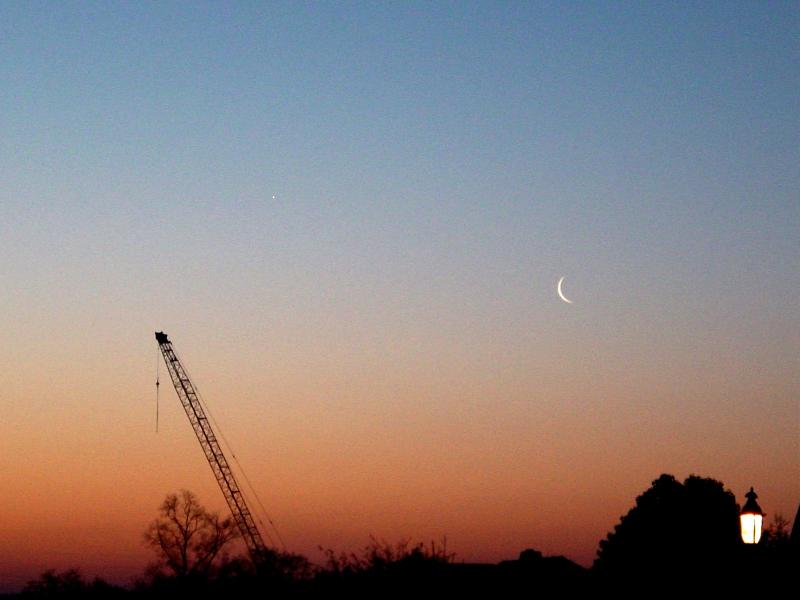 What film on those color aurora shots?? 15 seconds at what ISO?

There are some nice pics in this thread.

I remember those auroras from the early 2000's.  One was so strong that I could look south from West Virginia and see them. 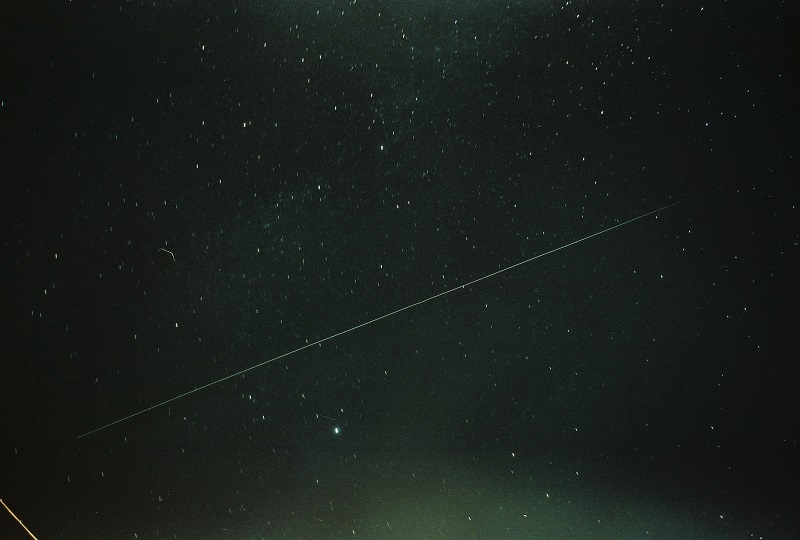 There are some nice pics in this thread.

I remember those auroras from the early 2000's.  One was so strong that I could look south from West Virginia and see them.

Nice capture of the Northern Cross (Cygnus) and Milky Way too

I was doing a little ‘fine Collimation’ on my C6 Evo and turned my attention to the Trapezium.  Seeing was 4/5 so I took a few afocal images with an iPhone 8Plus and iPhone XS for neural engine processing differences.  Pretty darn dramatic differences between both phones!

*** 2nd Image is with the iPhone XS.  I think you can just begin to see ‘E’ and ‘F’ with the superior engine processing... but significantly ‘cooler’ color saturation. 😊

Afocal cellphone pics can be pretty amazing--the technology seems to be advancing rapidly. 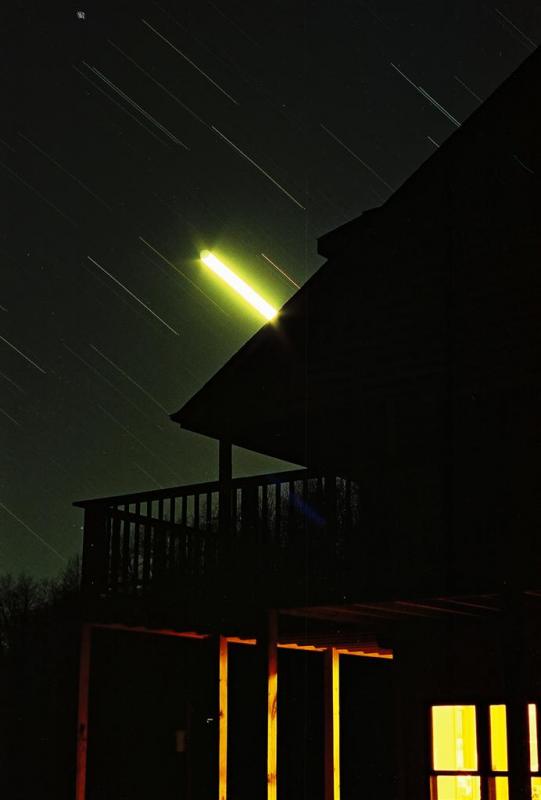 Afocal cellphone pics can be pretty amazing--the technology seems to be advancing rapidly.

That is a great image!!! Mars color is pretty apparent.

From 8-13-2006 5:01AM EDT in CT (in my brain this made it onto APOD, but I don't really remember...): Here are Mercury and Venus quite close to the horizon with Castor and Pollux above. 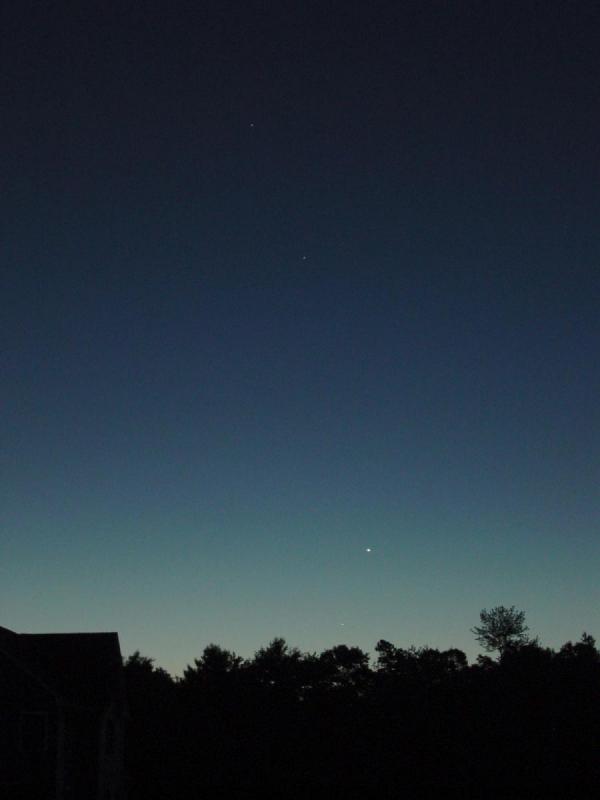 Nice pic--I like the way the stars and planets zigzag down to the horizon.

That is a great image!!! Mars color is pretty apparent.

Thanks.  Here is a pic from 2003 of a Moon/Mars appulse that shows off the red planet well.  Luna is a little overexposed in order to capture Mars.  Again, a Pentax K1000 at prime focus through my old orange tube C8. 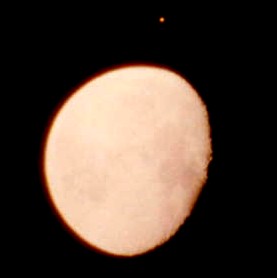 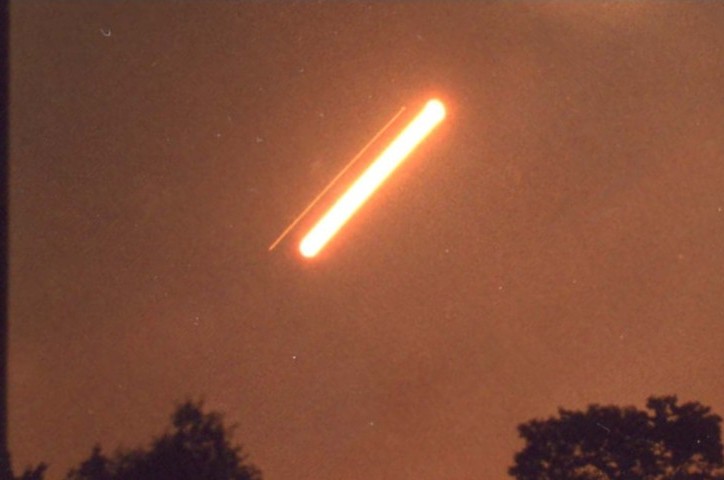 Here is a series of exposures of the occultation of Saturn by the Moon from 11-30-01 in Brownstown, PA using handheld camera over eyepiece of 6" f/8 Edmund reflector. In those days, the camera used floppy discs and was limited to about 10 exposures! That's why there is such a big travel gap between the penultimate and last image (where Saturn barely peeks out from behind the moon). 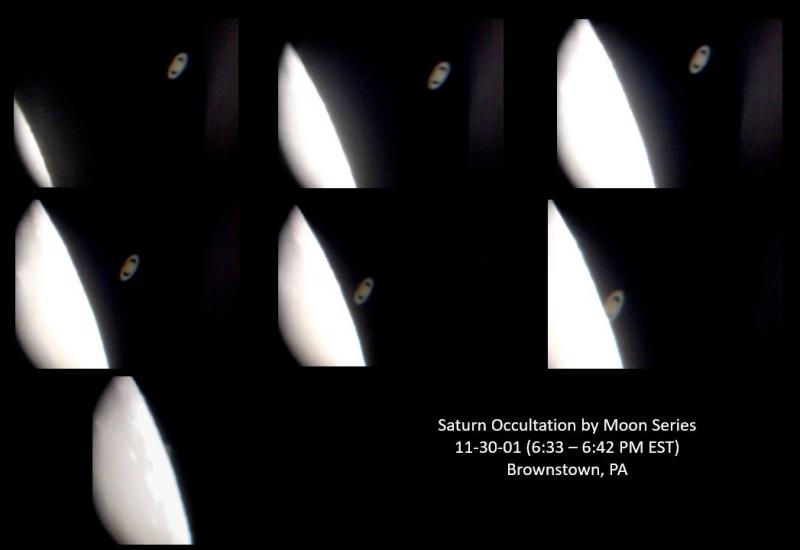 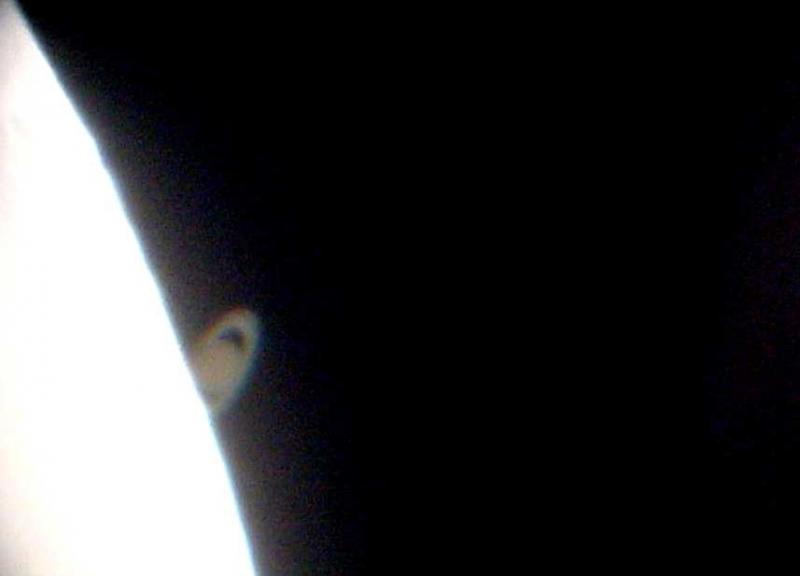 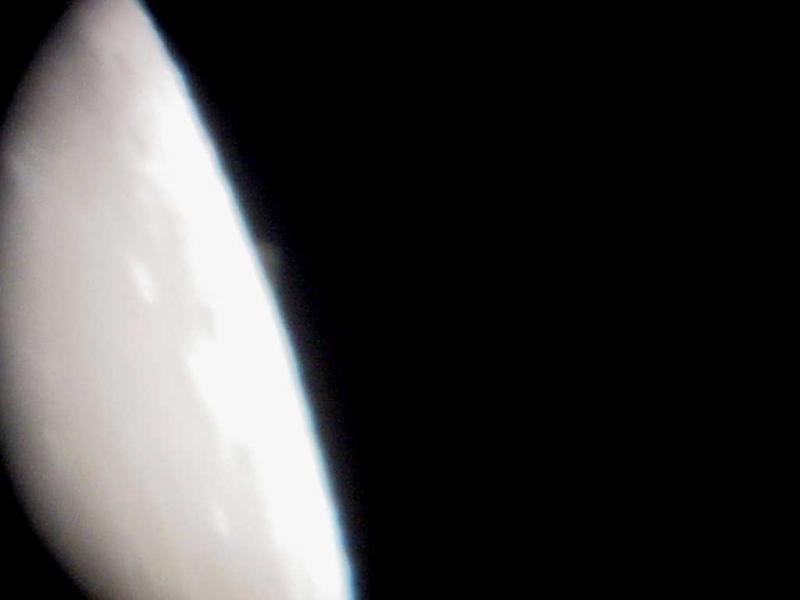 Here's a shot of Saturn, the Hyades, and the Pleiades rising over Twin Sugars Mountain back in 2001.  Pentax K1000 piggybacked on the C8.  That dark arc on the right is the end of the Celestron.  The leaves are off and you can see a couple of stars shining through the trees on the mountaintop. 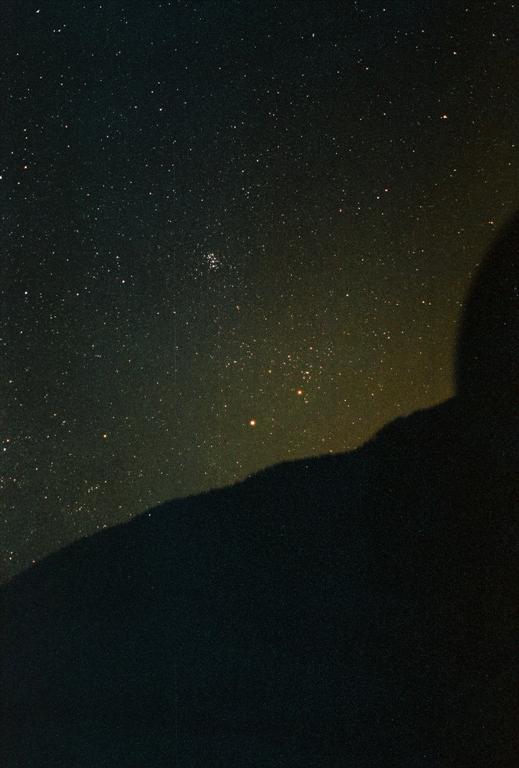 Thank you for looking,

PS: The pic is not so terribly old, my old astrophotos are on the films, needing to be digitized.

I did see this eclipse in November of 2003.  The Moon wasn't far from the edge of the umbra, hence the bright limb. 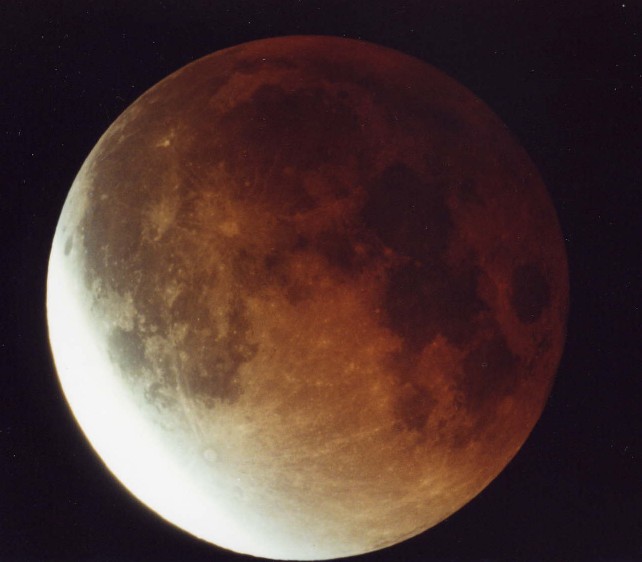