Blast from the Past: Add Your Amazing Photo!

So here are the earliest couple of images with Venus in the lovely sunset sky - It's in the wide view if you click, but the other pic from one minute earlier (8:03 PM EDT) is a telephoto view. 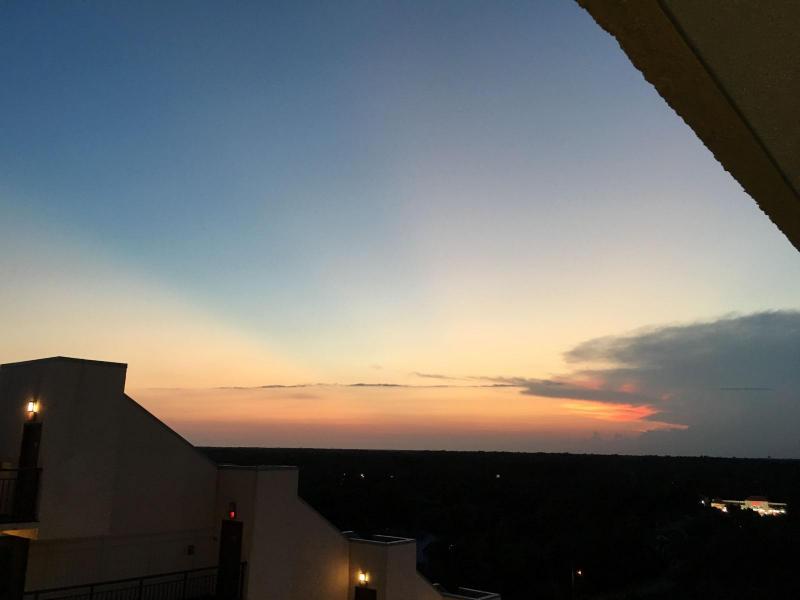 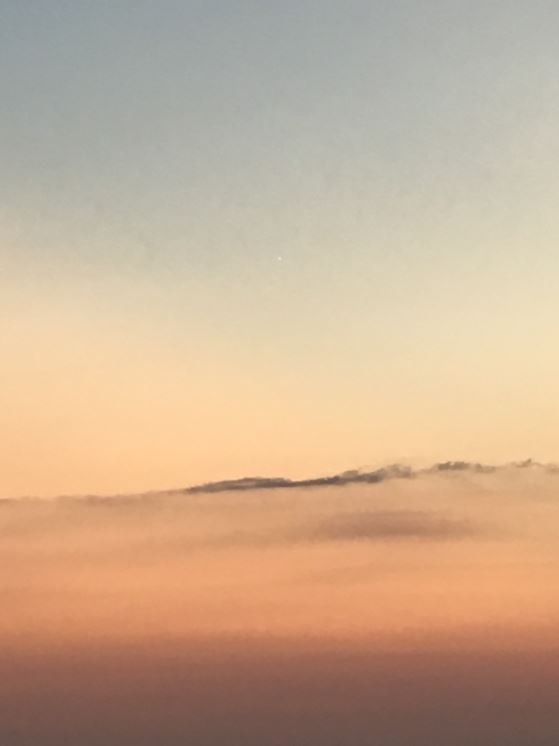 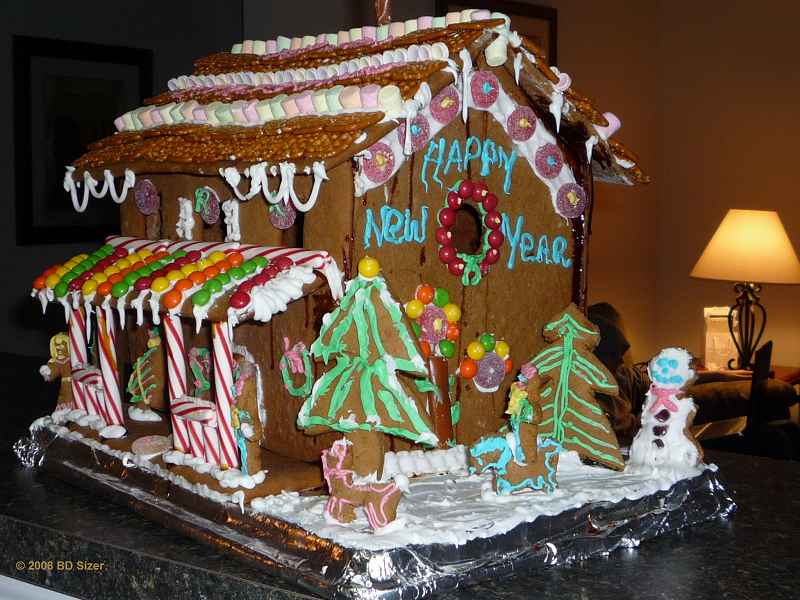 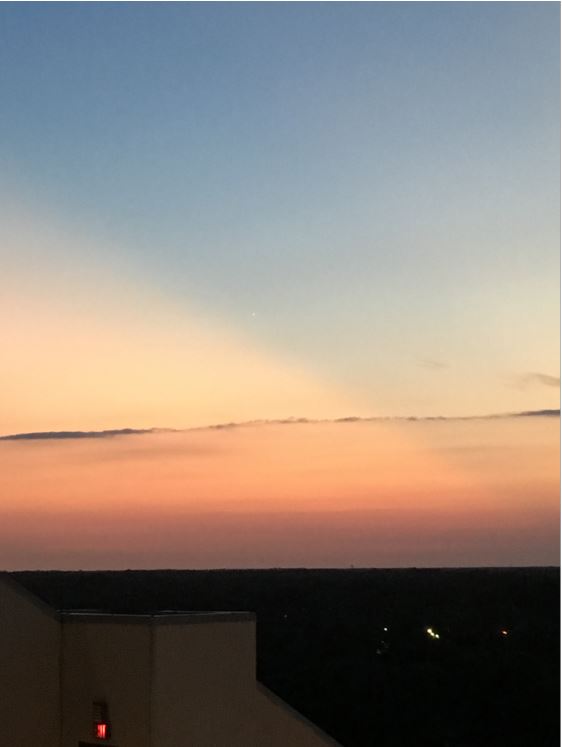 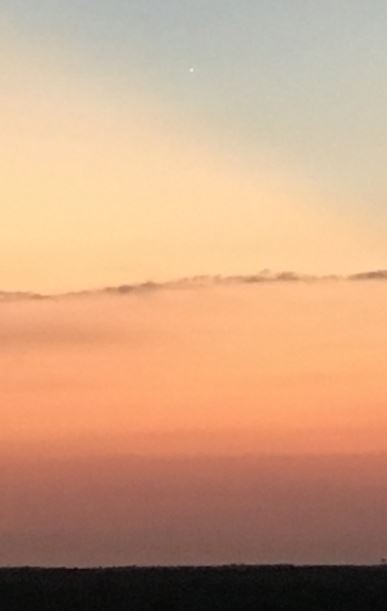 By 8:08 PM EDT from Myrtle Beach, SC, the shadow ray was much more pronounced and even contrasted Venus more nicely than earlier. 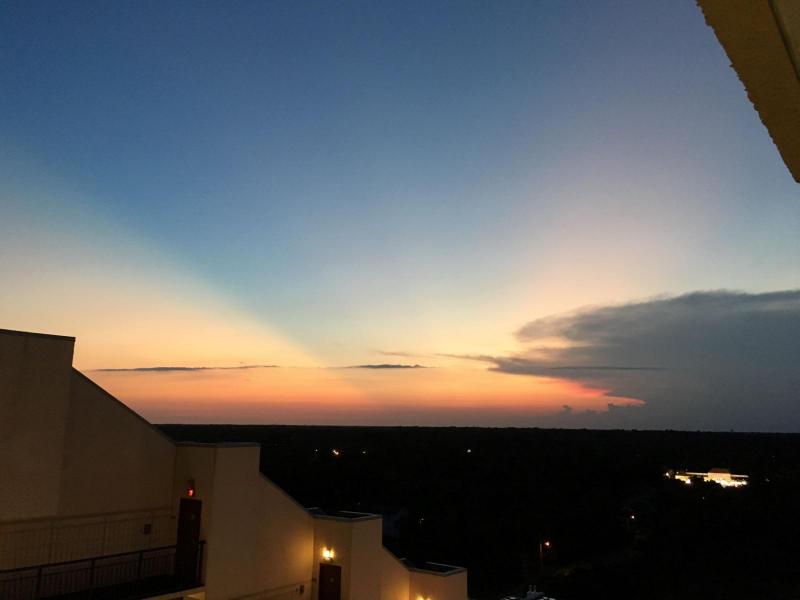 Zoomed in to show Venus - and JUST BARELY VISIBLE in Jupiter immediately below and right! 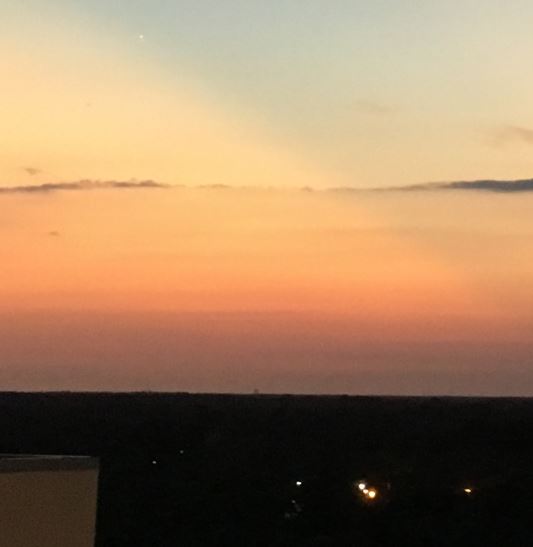 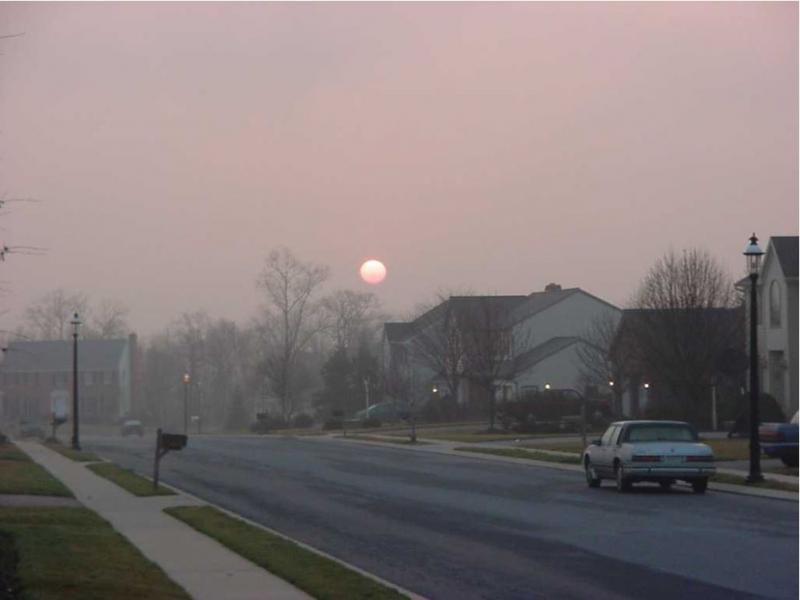 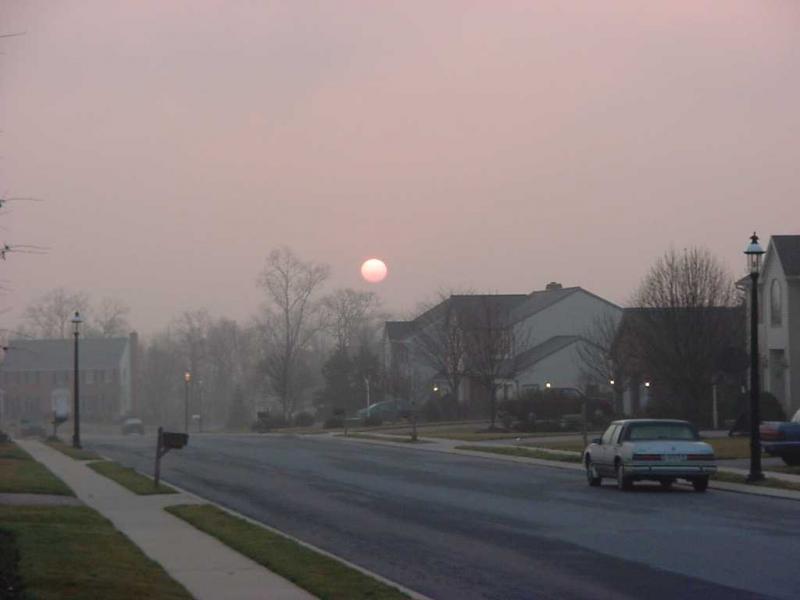 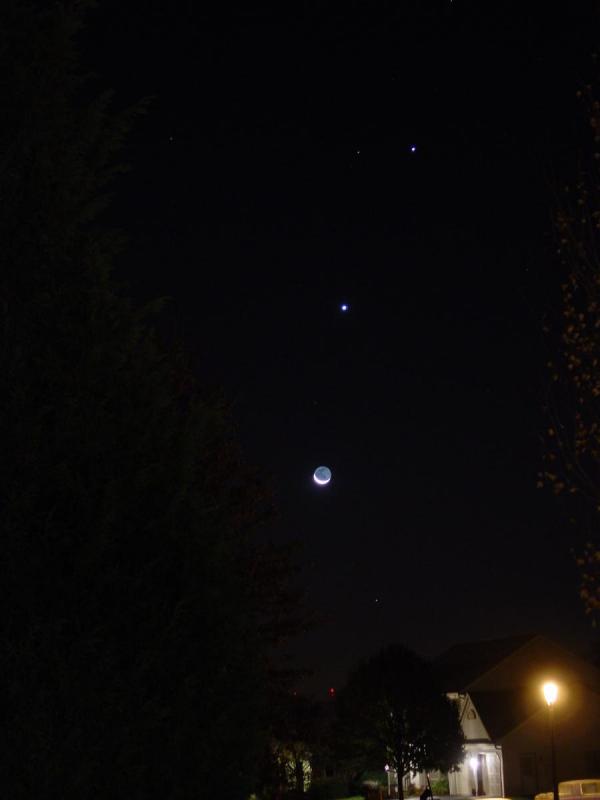 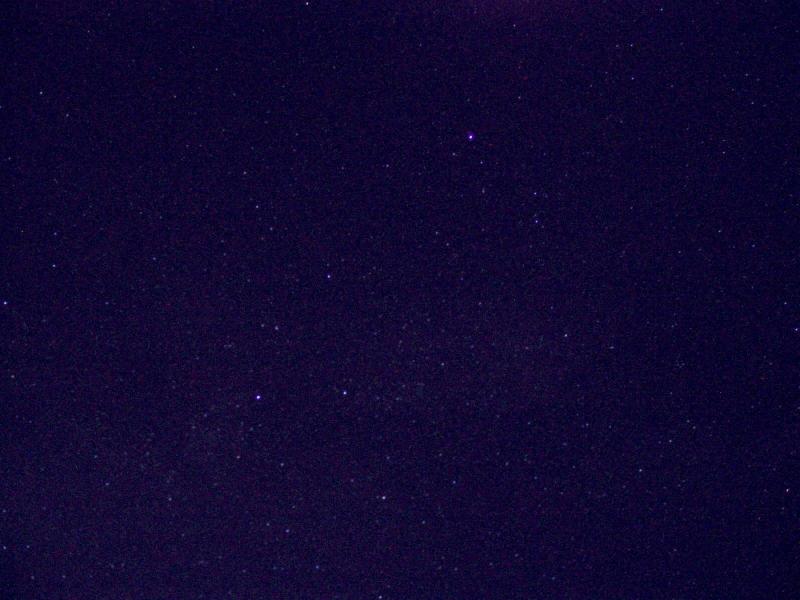 From our trip to AZ-UT in 2007: 5-3-07 between Petrified Forest and Painted Desert. Click for bigger image. 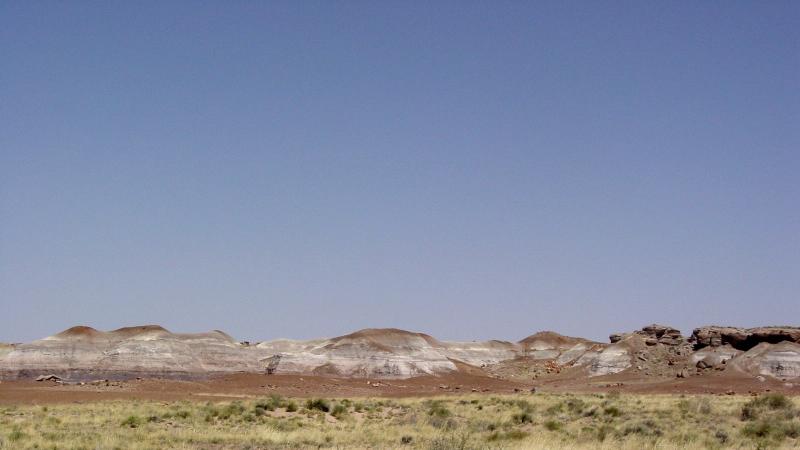 According to a legend, the city's unusual name resulted from a marathon poker game between Corydon E. Cooley and Marion Clark.

The two men were equal partners in a 100,000-acre (400 km2) ranch; however, the partners determined that there was not enough room for both of them in their settlement, and agreed to settle the issue over a game of "Seven Up" (with the winner taking the ranch and the loser leaving).

After the game seemed to have no winner in sight, Clark said, "If you can show low, you win." In response, Cooley turned up the deuce of clubs (the lowest possible card) and replied, "Show low it is."

As a tribute to the legend, Show Low's main street is named "Deuce of Clubs" in remembrance. 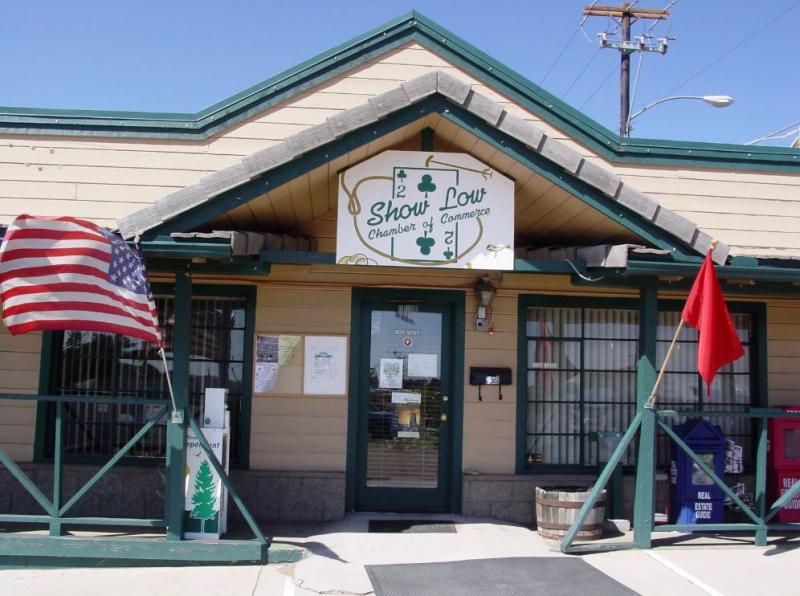 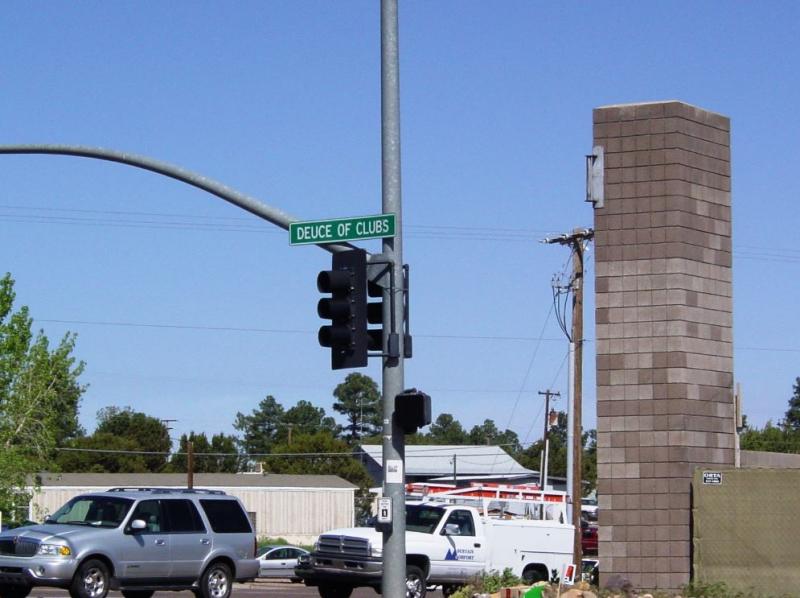 A building in the early morning sunshine in the center of Lititz, PA, 4-23-02 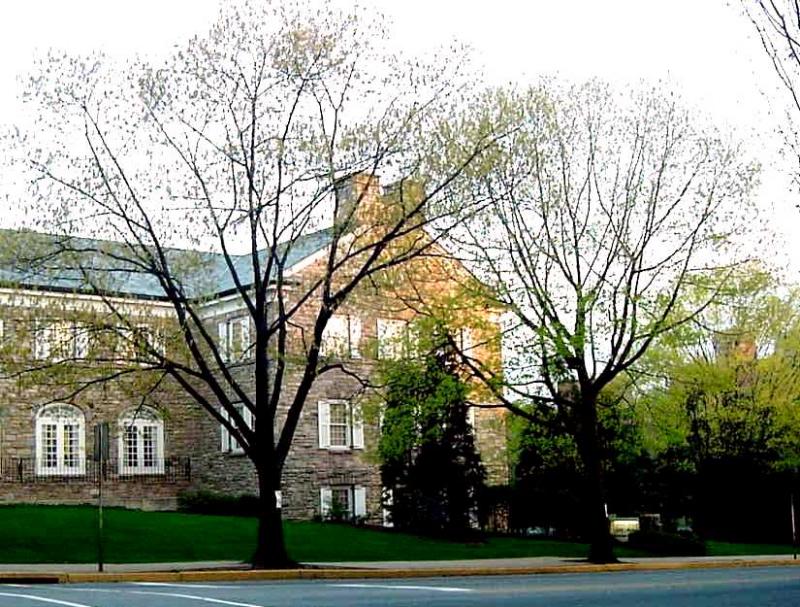 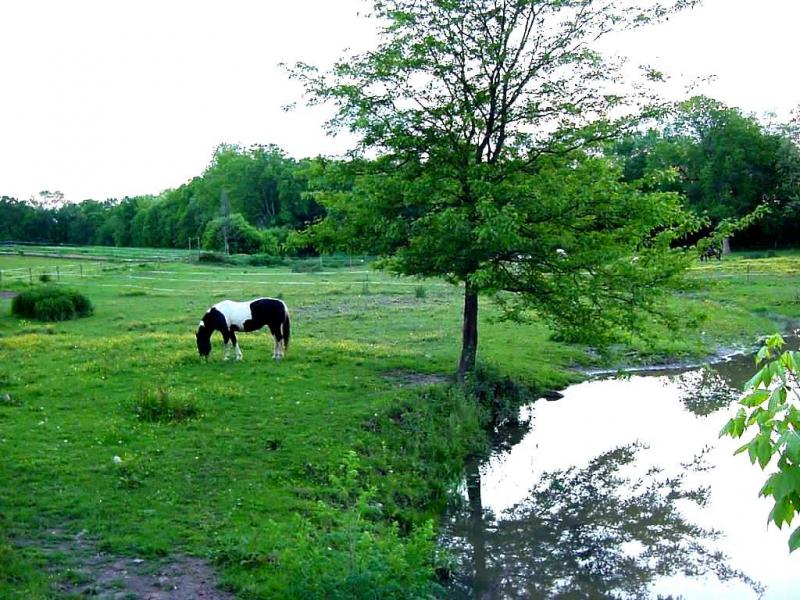 Dome of the 200" Hale Telescope, Palomar Mountain Observatory.  Taken circa 1990.  Drove up the mountain in an 18 wheeler tractor after dropping a trailer in San Diego.  The observatory was closed to visitors because the astronomers were working at night. Who would have guessed?  Not to be turned away, I climbed over a barbed wire fence with my 35mm Pentax film camera.  Lacking a tripod, I set the camera on a tree stump and took a couple of time exposures of the dome in the moonlight.  A little bit of star trailing, probably from the camera moving when I tripped the shutter.

Snow-covered trees at dawn from the backyard of our home in Brownstown, PA, on 4-6-02. 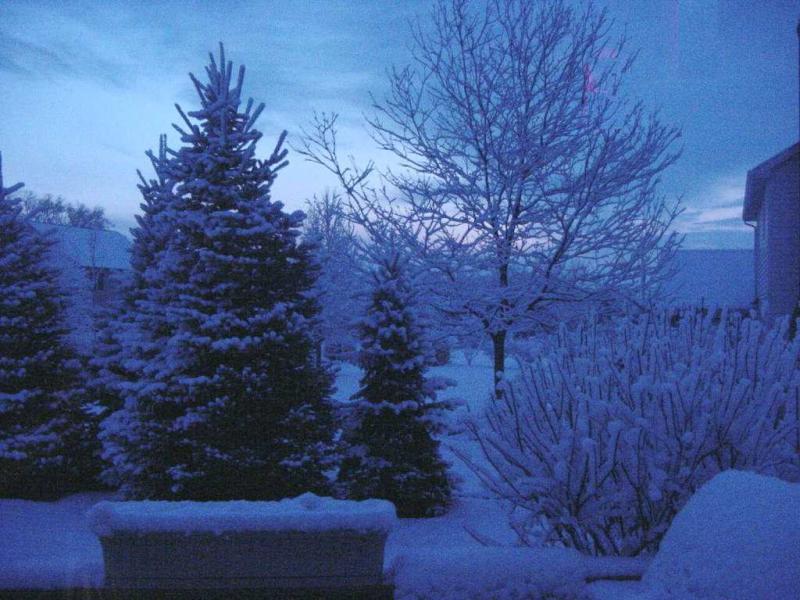 From August 2002, aboard the Maid of the Mist - Niagara Falls up close and personal. 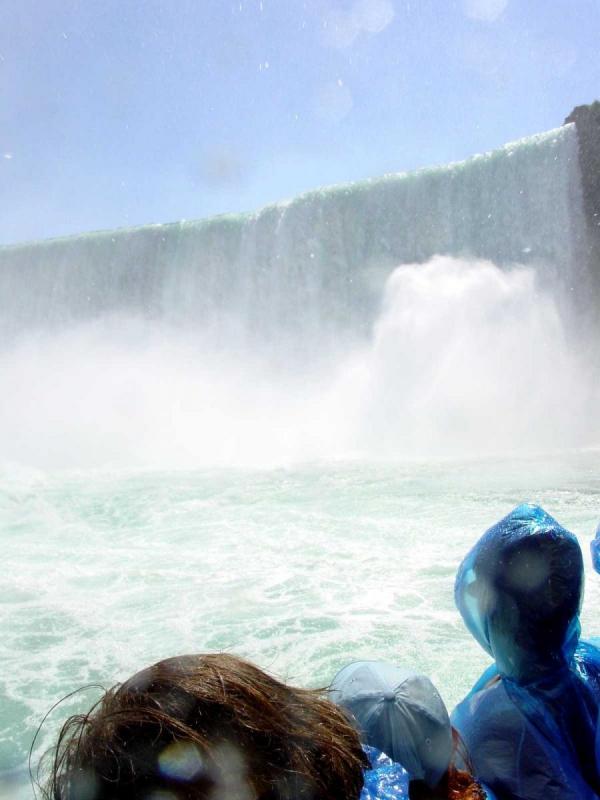 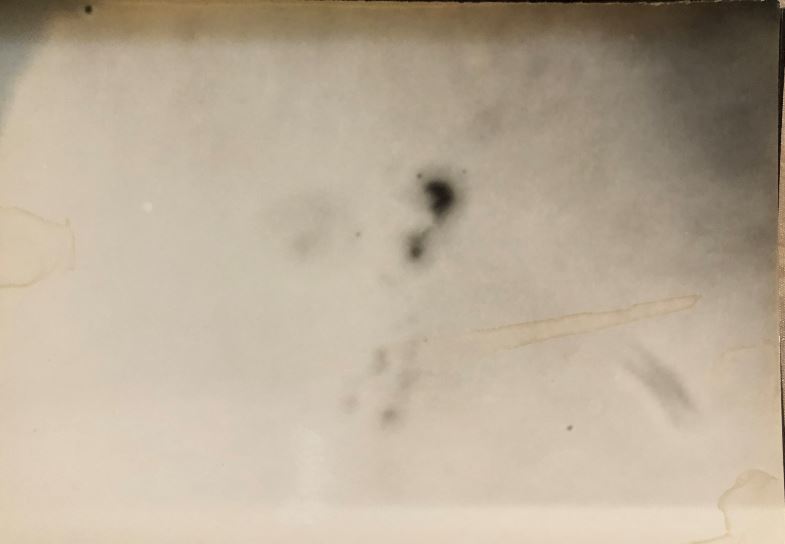 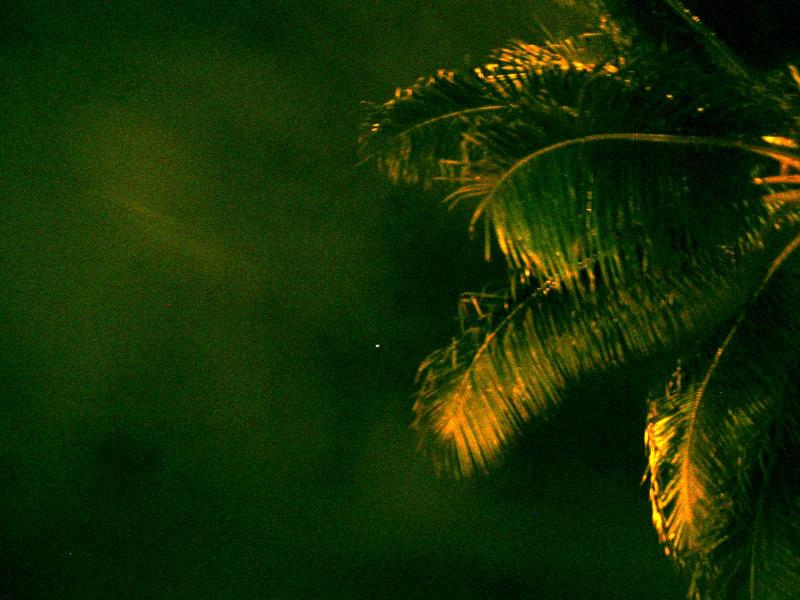 Camel's Hump in Vermont from the airplane in September 2003. 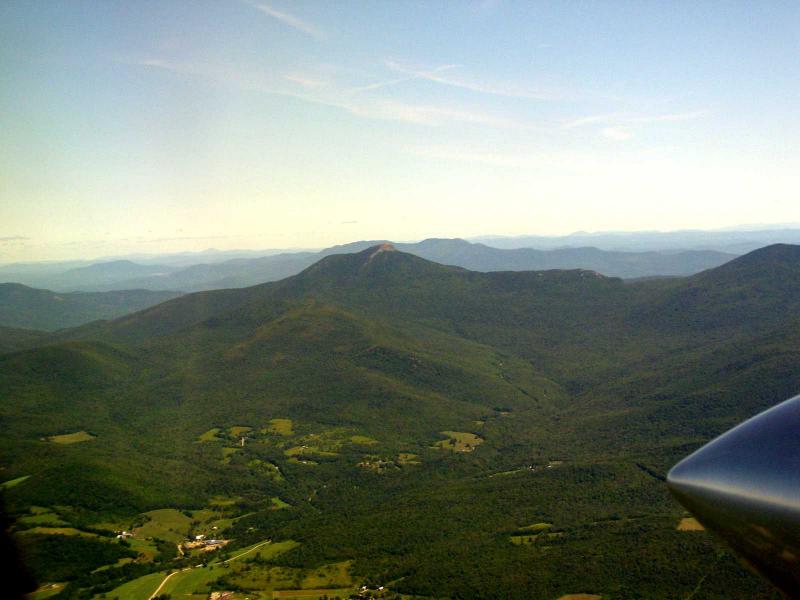 These two are from my colleagues Javor Kac and Jure Zakrajšek, of the Leonid storm in 2001 from Mt Lemmon, Arizona. We observed together there (part of the 2001 Leonid MAC ground support team) - I wasn't much into photos before digital, too much fuss. The first is the view of the old radar dome on Mt Lemmon in morning twilight of November 17th, the night before the storm (by Javor). The second shows 5 Leonids shooting through Ursa Major during the storm (by Jure). What a night this was!

More photos: http://www2.arnes.si...2001photoaz.htm - many more meteors and trains. And the team.
CS!Jure

Another blast from the past - my best Perseid so far: a -10 magnitude meteor shooting through Cetus in the morning of August 12th, the night before the peak. It lit up the sky and the scene. Ten years ago, 2010. Captured with my trusty old Nikon D80 and 18 mm f/3.5 lens (ISO1600). Got much better cameras now, but the D80 was great, getting frozen, soaked and dropped to the ground while under night skies for over 10 years.
CS!Jure

Here's the last Venus transit getting photobombed by the ISSS. I didn't even realize it at the time. 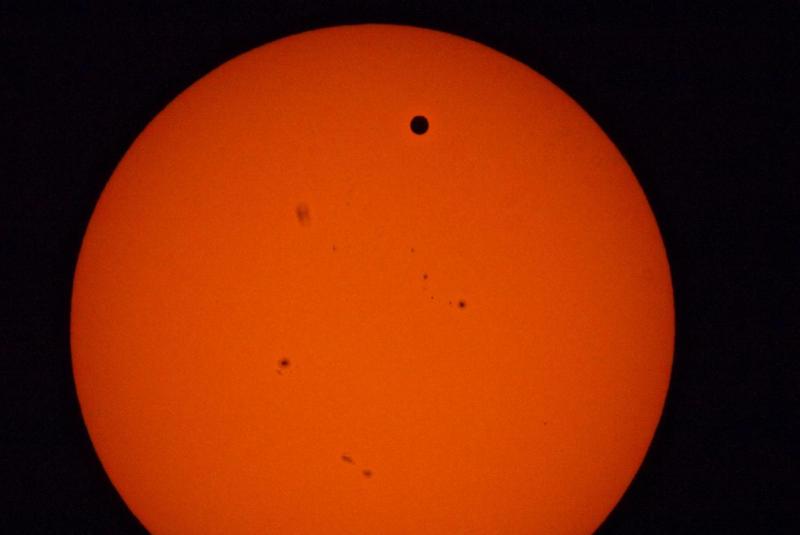 A couple of images of the Vermont mountains from the plane, Sep 2002 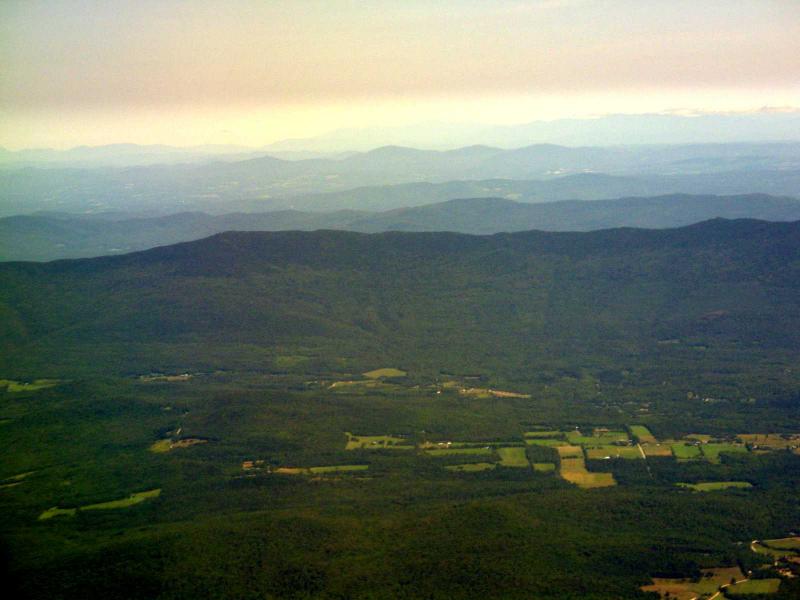 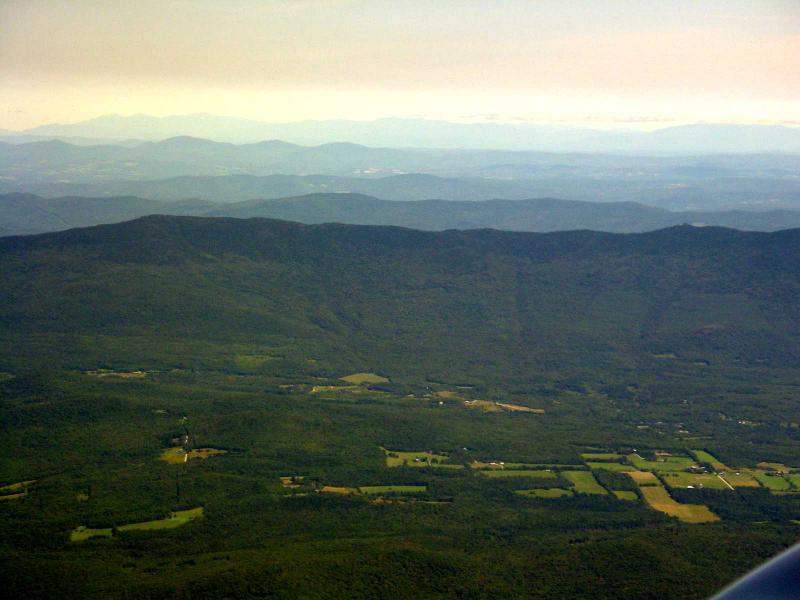 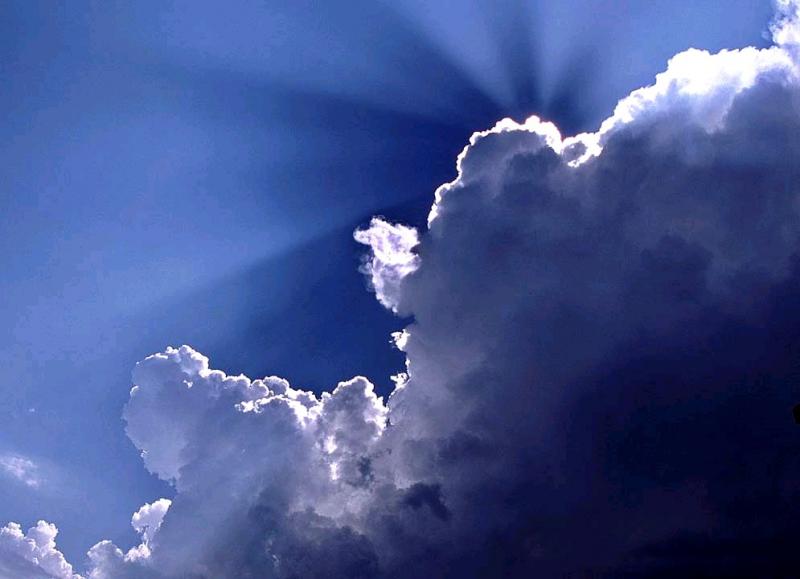 Film collection from the 90's

Our last Great Comet visible in northern hemisphere was Comet Hale-Bopp. Here's one taken on film in 1997 with a Pentax 200mm telephoto f/4 riding atop a Celestron-8.

That is awesome! One of the best I have ever seen of this comet!

That is awesome! One of the best I have ever seen of this comet!

Thanks, REC. I was in the right place at the right time for that. The photo was taken from a ridge top overlooking the village of Happy Camp, CA. For us in the northern hemisphere Hale-Bopp was the last great comet. In the succeeding 23 years there have been a lot of other comets. The best (in my estimation) has been this year's Comet Neowise. That one was indeed a very good, if not great comet. 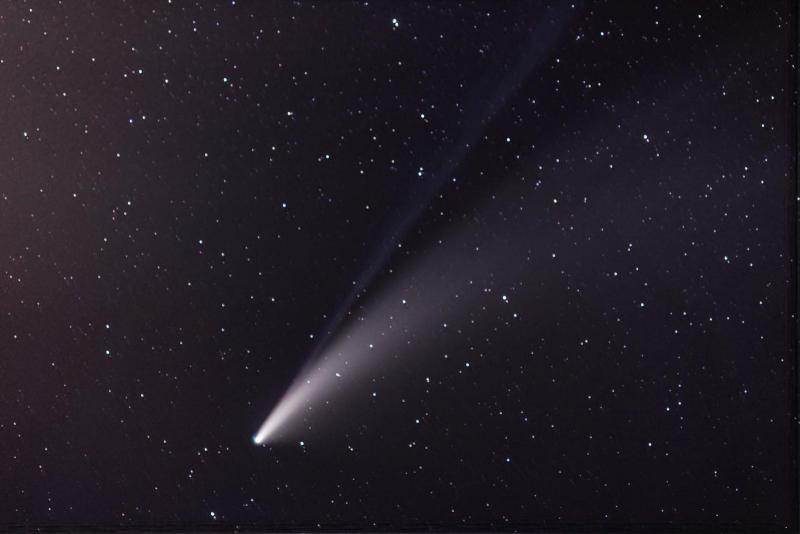 Check out this collection of comets - ones I have been privileged to observe.