117 replies to this topic

. Thank you again for caring about questions and giving every information interested people need!

Looking forward to guide graphs or infos. After that I only need to decide, if OnStep is fine and reliable or Pulsar 2 would be the better option.

From what I hear, the OnStep controller should be just fine.

However, unless GTD are offering another option, the supplied

purchased mine, I would have chosen it.)

So, 1.25" bore counterweights will be slightly "sloppy" on

a 30mm shaft, but if there is enough travel in the locking

mechanism, it should be lockable, with a slight unbalancing

I chose to go with OnStep controller for E Fric. The counter weight shaft diameter is1.25", so I will use the Losmandy 22 pound CW.

I plan to use SV 110ED refractor and AT6RC as my OTAs. I have used SV110ED on my previous Losmandy mount. AT6RC needs to be collimated

Both OTAs with imaging cameras,guidescope/OAG weigh close to 20 pounds. I plan to upgrade a long focal length scope later on once I get better at imaging/processing.

I've been using OnStep 3.16 with a self built controller on my G11 for about 50 hours of automated imaging and the mount as been rock solid.  The community for OnStep is still active and in my experience responsive to questions and feedback.

There is not really a vendor, however, to rely upon so you do need to probably have some technical background in order to potentially troubleshoot to fix things.  I love doing things like building 3D printers so it is right in my wheelhouse, but for someone who prefers to call someone on the phone when something doesn't work I'm not sure OnStep would be the best choice.  Perhaps others can add some perspective on this angle.

NOTE: I normally use the PMC8 controller on the G11 as it works wonderfully and is well supported by ES, but I had a real desire to tinker being locked in the house all this time so thought the OnStep would be an interesting diversion.

From what I hear, the OnStep controller should be just fine.

However, unless GTD are offering another option, the supplied

purchased mine, I would have chosen it.)

So, 1.25" bore counterweights will be slightly "sloppy" on

a 30mm shaft, but if there is enough travel in the locking

mechanism, it should be lockable, with a slight unbalancing

Thanks Gregory for pointing out the CW shaft diameter(30mm vs 32 mm). I will have to check if the lock screw has enough travel through to lock on.

Where did you get the CW from?

> Where did you get the CW from?

The counterweights in the photograph are 3kg and 6kg

counterweights from 10Micron.  I got mine from O.P.T.

but only because they are geographically close to me.

It still took nearly three months to get them, since they

had to be imported.

Another good option is Alpine Astro:

Another maker of 30mm bore counterweights is Avalon

The necessary counterweights arrived to balance the

and slewed around (under the clouds) without difficulty.

Here are a couple of pictures of the Harmer-Wynne on

the E.fric.  The E.fric seemed to handle the weight well,

and I was able to connect the controller and slew around 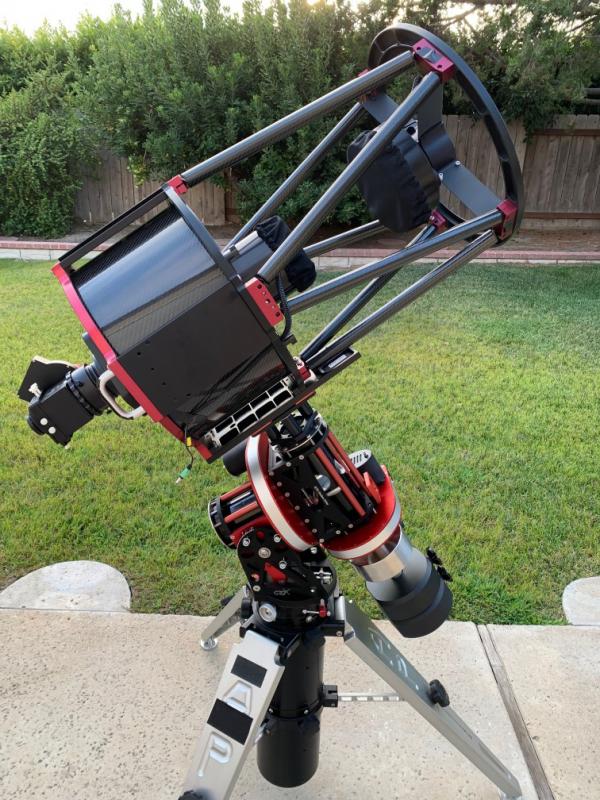 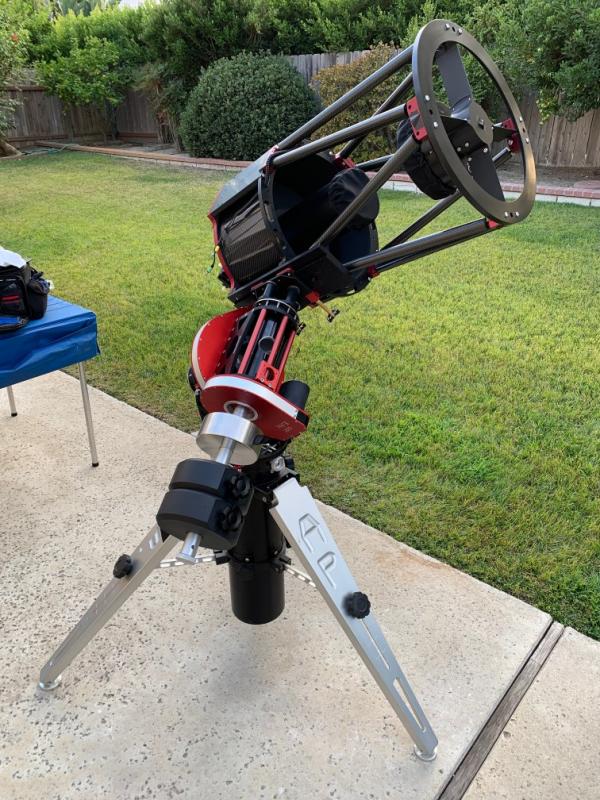 It is not important, because our hobby takes place in darkness, but I have to say, that is a beautiful combination of scope/mount/tripod.

So where do you live and do you have a guard dog?

Attached are two guide graphs taken with the E.fric,

the Pulsar2 (at sidereal rate of course) using relays

directly from the guide camera, and PHD2 as the

Cassegrain, which means a focal length of about

weigh about 24kg, and the concomitant counterweight

in this thread for photos of the setup.)

Since guiding was done with an on-axis guider,

the entire focal length of the main instrument was

used for guiding.  Both RA and Dec aggressiveness

were set to 70.  The guide camera has a pixel size

arcsec/pixel.  According to the Pulsar2 manufacturer,

The target was in the M29 region, which means that

the OTA (at my geographical location) was pointed

near the zenith for these tests, at approximately +38.5

degrees declination.  The wind was very low, I estimate

Unfortunately, this test was done rather hurriedly,
since clouds threatened the sky.  That means that the
polar alignment was probably not as good as it could
have been, since I went through only one iteration of the
alignment procedure, which skews the test somewhat.

However, the seeing was fairly good, although

transparency left something to be desired. 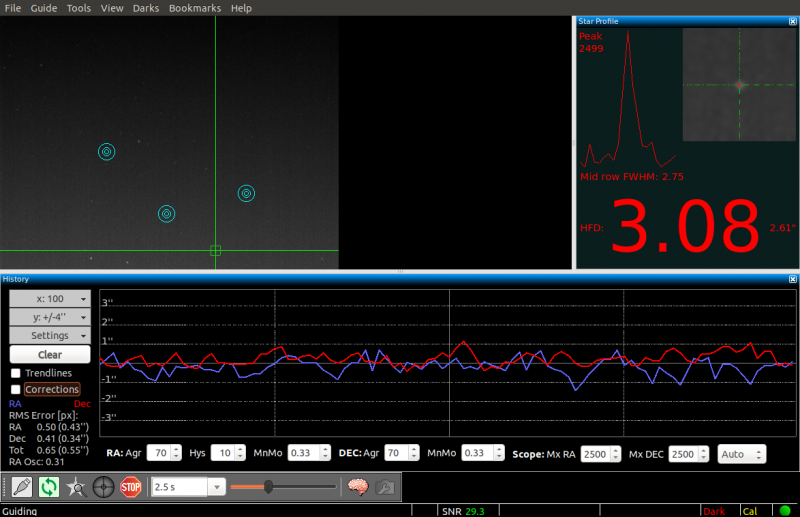 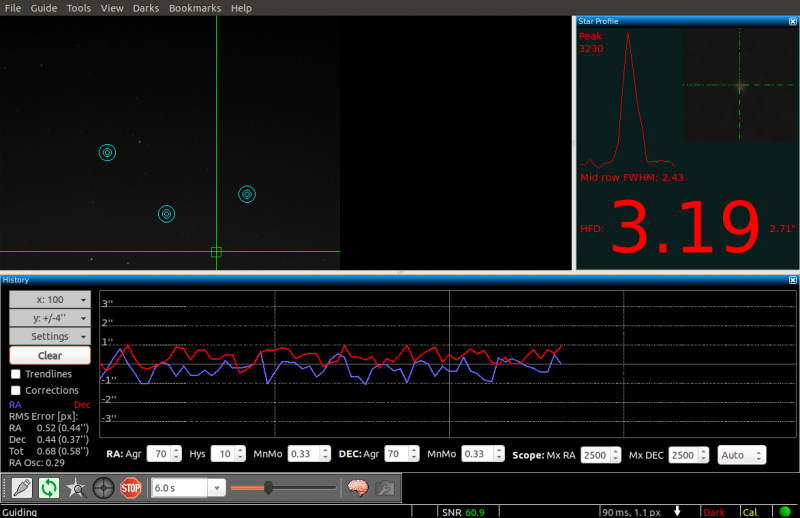 The interesting thing to me is that the excursions
around the midpoint were generally within +/- one
second of arc for both the 2.5-second and 6-second
intervals.  I suspect that longer intervals (say,
10 seconds) would have about the same performance,
which means that the mount performance is steady
and stable.  The slight upward Dec trend in the 6-

The polar alignment was certainly not good enough for
an unguided test.  I will be re-conducting these tests
as soon as sky conditions allow with 1) better polar
alignment, 2) guiding in a different, more challenging
part of the sky, and 3) longer guide intervals, including
an unguided test.  I will also take more care with the
optics (focusing, etc.) so that I can also post some
accompanying images.  The images I have now would

not be exactly a fair representation of what the mount

can do, although they are quite as good as anything

I have experienced with my previous mount.

I will also soon post further impressions of the mount
operation, now that I have a little bit of experience
with it.

What I *can* say is that the performance under these
conditions seems to be at least as good as my previous
mount, although I am hoping for better performance.
Certainly the Dec behavior is much steadier and more
predictable than with my previous mount.

I have one remark re  guide speed. In short, it is too high. Below I explain why.

It would be interesting to see how reducing the guide speed impacts on RMS (the same night naturally). Remember to recalibrate PHD2 as with a cable it has no way to know about the change. The ASCOM driver does pass over the guide speed to PHD2 but I do not know if PHD will poll it before each guide session or just before calibration.

Glad to see you got the mount.  Looks like all is going smoothly.  Can you provide any experiences in using the altitude and elevation adjustments for polar-aligning?  Is there backlash?  Does a star jump a bit when locking back down after making adjustments?

It looks as if András gave some fine directions, as usual!  :-)

and with the guide speed reduced to 0.3x sidereal.  The conditions were

the same as before, except that transparency was poorer (not all of the

particulates from the widespread fires are out of the atmosphere yet).

We are still near the zenith, in the area of M29: 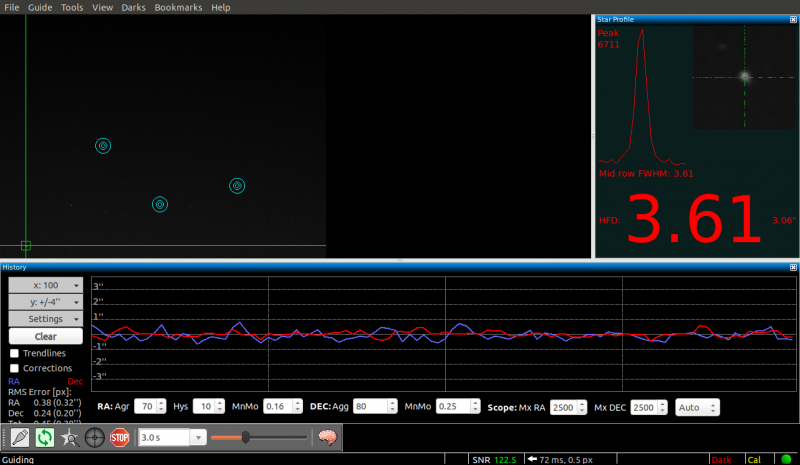 For me, these are impressive numbers, especially for a mobile setup, and

cannot deliver quite this level of performance, even under the best

Just for fun, I include here a detail from a 300-second image (red-filtered)

taken under these very poor-transparency conditions, while the guiding graph

above was being taken.  This is only a fraction of the image, since I wanted

to maintain the full resolution for pixel-peeping: 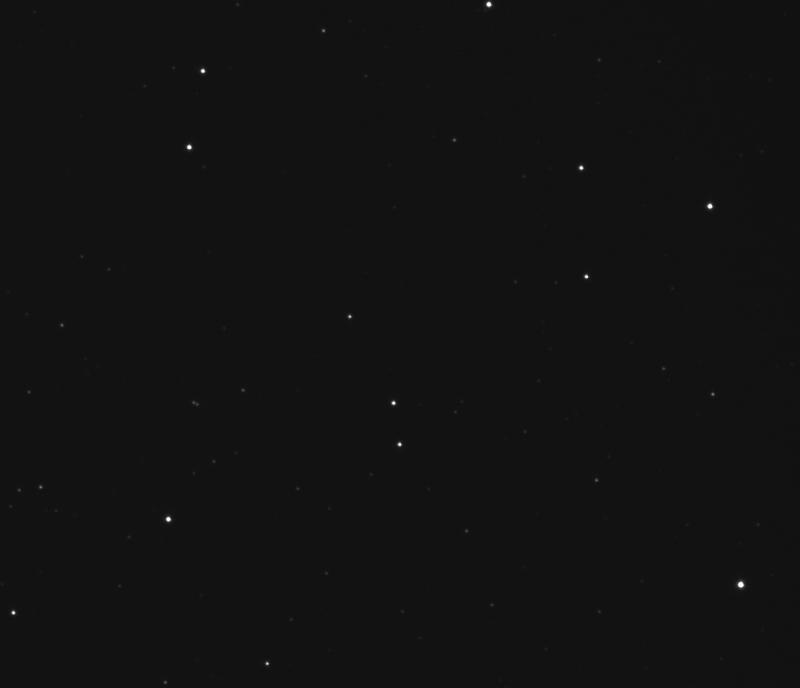 Trust me on this, any oddness in star shapes is the optics, not the mount...

...Can you provide any experiences in using the altitude and elevation adjustments for polar-aligning?

Is there backlash?  Does a star jump a bit when locking back down after making adjustments?

most about the E.fric -- they are quite smooth, although

than with my current mount.  No jumping or backlash that I

can see, but I did take care to provide a solid azimuth pin,

I will make some other remarks about the mechanics soon,

however -- there are some negative aspects in dealing with

the mount that keep me from making a completely unqualified

I will also have further remarks on the Pulsar2, now that I have

So I have finally put the mount to work.

One thing I needed to figure out was automatic meridian flip,

I found the solution and asked Andras for a new FW all is well now, what a great mount.

So I have finally put the mount to work.

One thing I needed to figure out was automatic meridian flip,

I found the solution and asked Andras for a new FW all is well now, what a great mount.

Thanks! I had found this solution on the Onstep forum as well and indeed it works as you say, so now Andras know's too and all of us using Onstep know how to tackle this issue going forward.

It is really refreshing to have a mount solution that doesn't rely on proprietary controllers and command languages.


Also tagged with one or more of these keywords: astrophotography, equipment, mount