The May 2020 Challenge is now open. The target is M53 a globular cluster in the Coma Berenices constellation. To reduce the number of stickies, please submit your entry to this thread.

To increase participation over such a diverse group, the winner will be selected by random drawing. Please feel free to start a thread requesting guidance on your entry prior to submitting it, the whole purpose of this challenge is to learn and compare on a common target. Entries must be submitted by midnight eastern time on May 31, and I will try to announce the winner sometime on June 1.

Note: If I am late announcing, gently nudge one of the moderators in a private note, it helps.

Got this last night before clouds rolled in. The atmosphere was pretty bad, so bad that my 8RC and 10RC stuff were unusable, but I had a feeling that would be the case with the bouncy and fuzzy stars in them. Also, due to how close the nice and bright moon was I could only do short exposures, but I know I will revisit this one. 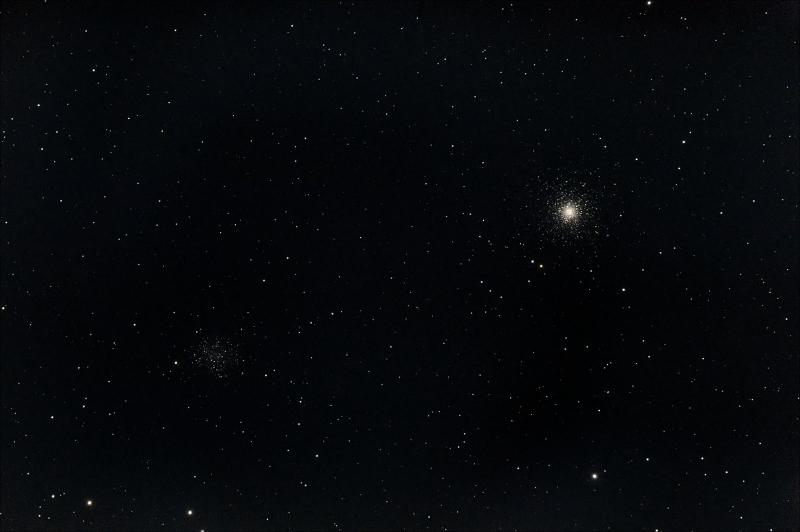 Most of the times I cannot submit to this challenge, because either the target is not in my FOV that month, or I did not get any clear sky time. But this time I was lucky I guess, just finished an image of M53 two days ago. I like globulars, but I did M3 last month and although I really like that M3, they all look kinda similar. Still I picked M53 because of the moon and no Ha-targets I want to persue. And in the end, it is always fun to try and nail those star colors, both in the globular and around it. 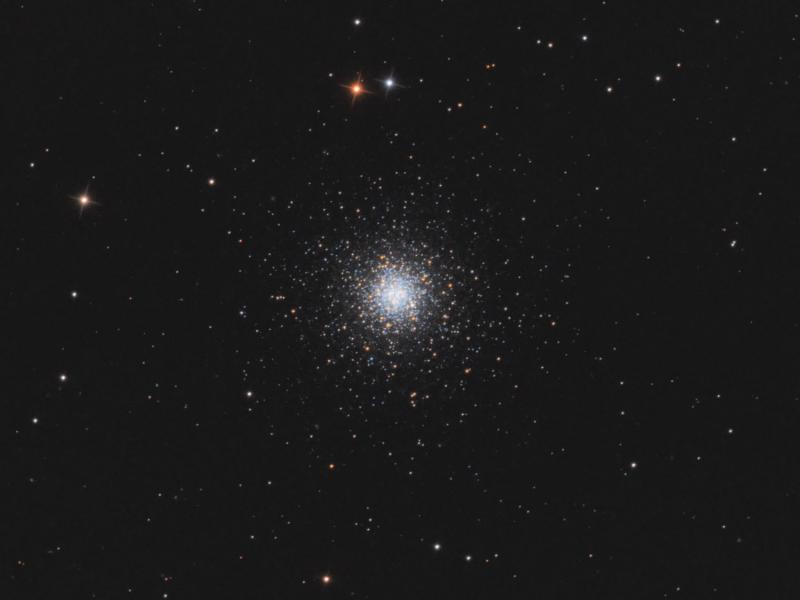 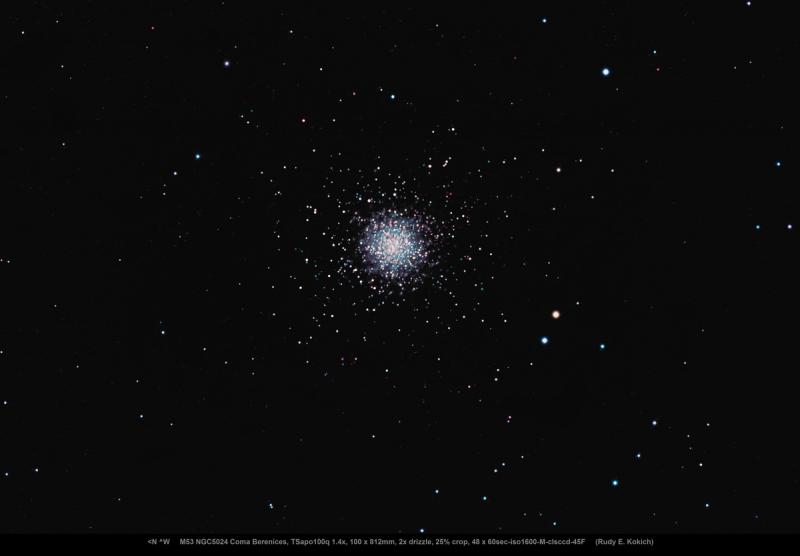 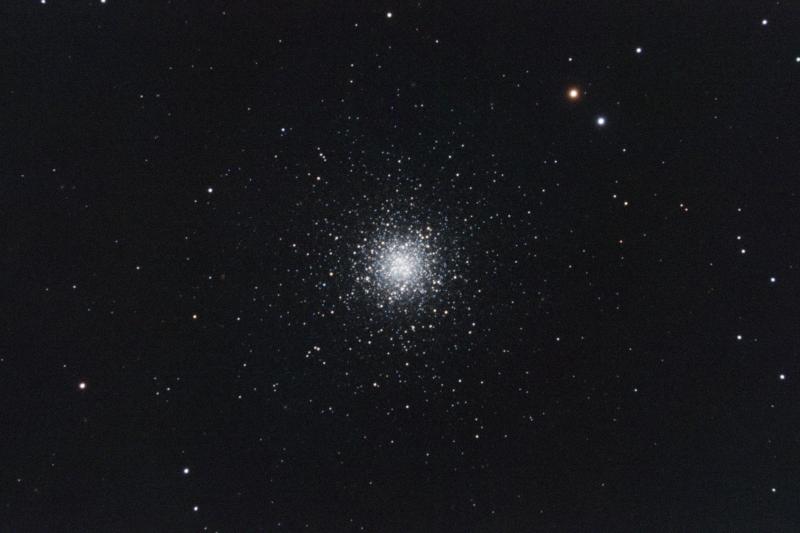 Calibrated and stacked in PI; post processed in PI and PSCC 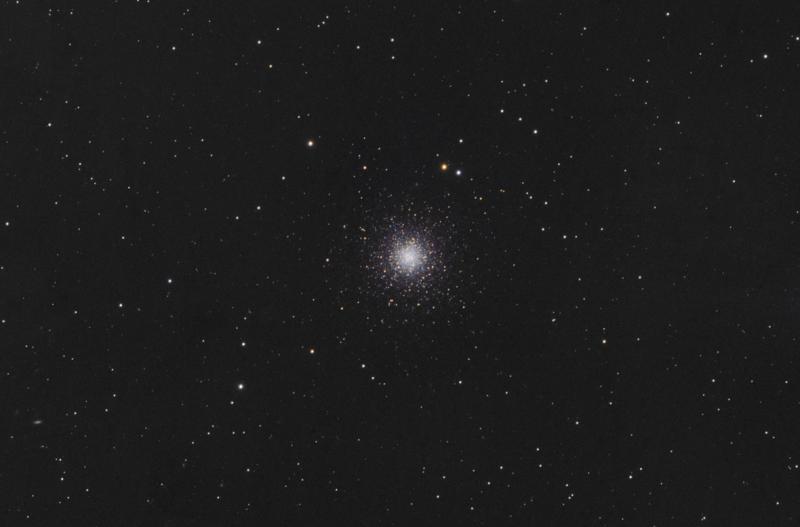 Thanks for the globular cluster target.  I definitely need practice in this  area.  This picture was taken using the ASI183mm-pro and a 8" f/4 reflector.  30 minutes total integration using RGB filters, no luminance, at binx2  with 15 second exposures.  Stacked in DSS, and developed in Star Tools and Gimp.  The full moon was rising at 9:04 PM, so not much time to  image.  I think you can image clusters with  a lot of moonlight, but starting with no moonlight and going to a full moon might not work. 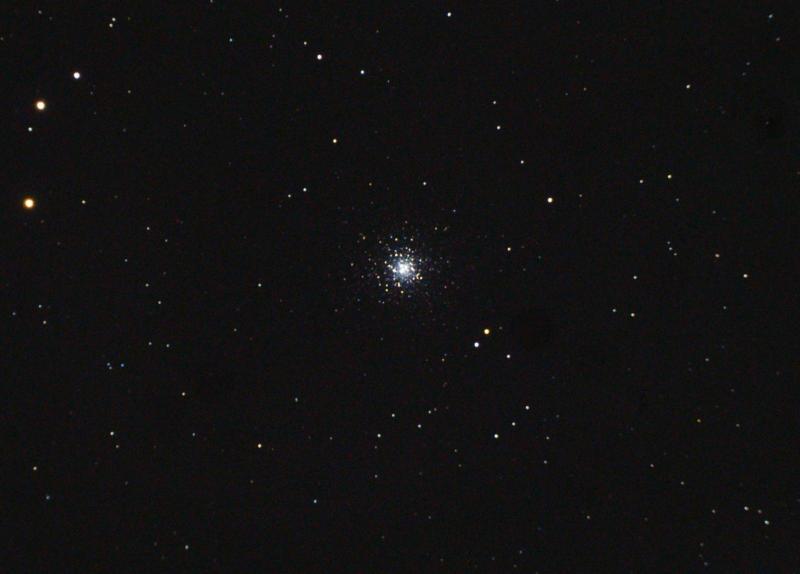 I'm definitely a newbie, still have a lot of learning to do on this front. This is my first ever time submitting one of my photos for the imaging challenge. Its been a typically cloudy spring in Oregon, so its also been challenging to get clear nights.  Taken 5-8 from my light polluted suburban backyard. More data would help but I think it turned ok for my first try.

My first posting ever, I have been imaging for about 8 months.

Thanks to Cfreerksen for being my mentor through this!

Nice to have a target that can imaged during strong moonlight. 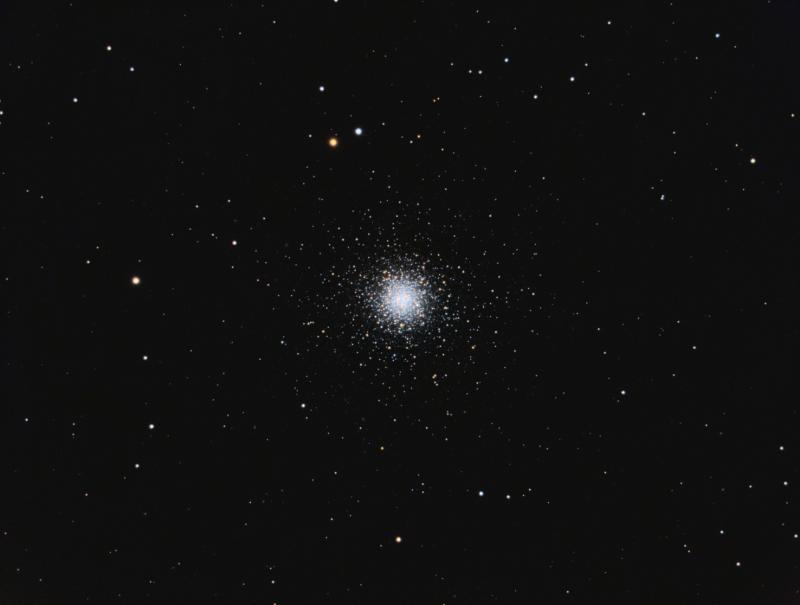 Here is my image from last night.

Final touch up in FastStone for contrast, sharpening

Image size was reduced to fit within posting requirements. 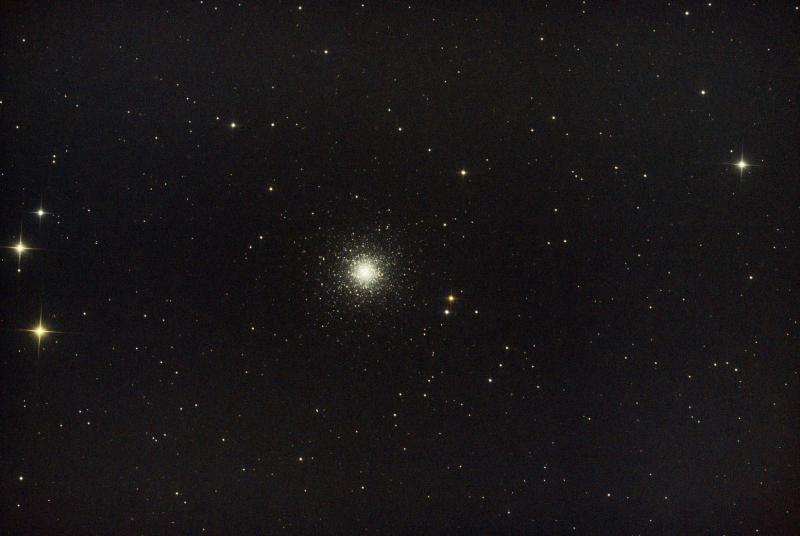 This is likely my last imaging session with my Stellarview SV80A and ASI533.  (assuming UPS drops of my new equipment today!)

Framed to also get the smaller cluster, NGC 5053.
A rather short session for me since I usually try to go for rather long multi day integrations.

Fairly minimal processing on this one. 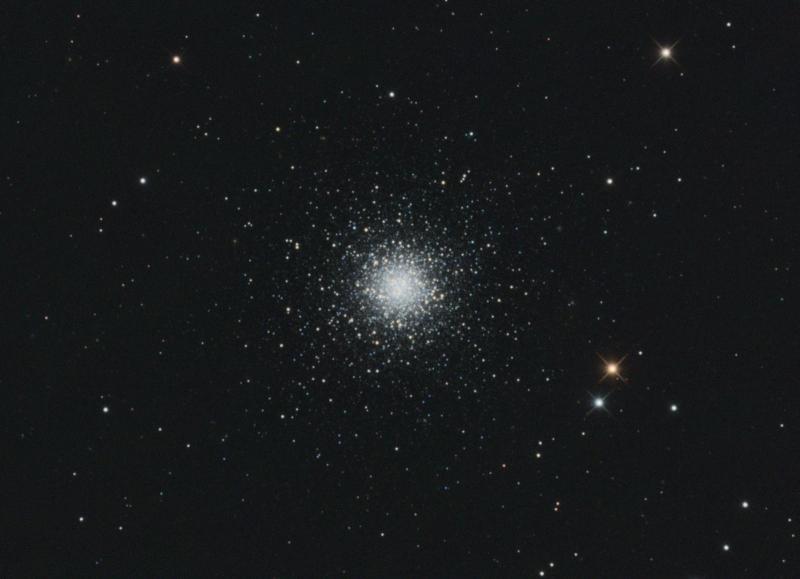 Here goes...  According to the Astrospheric app clouds were 21%, Transparency was below average, and Seeing was average.  I've seen better nights but this may be the only chance for May.  The moon was about 25% illuminated.  Located on a Bortle 6/7 border

Equipment was a 6SE with 0.5x reducer (55 mm spacing to sensor), Moon/Sky glow filter, and ZWO ASI385MC with IR-cut filter at 400 gain and 120 x 5s exposures, for a total exposure time of 10min, and dark frame corrected using SharpCap livestacking.  The FITS file was opened in Deep Sky Stacker and the light levels were primarily adjusted in that.  PhotoShop Elements 13 was used on the DSS TIFF file for some additional light level adjustments, improved color balance, and final cropping. 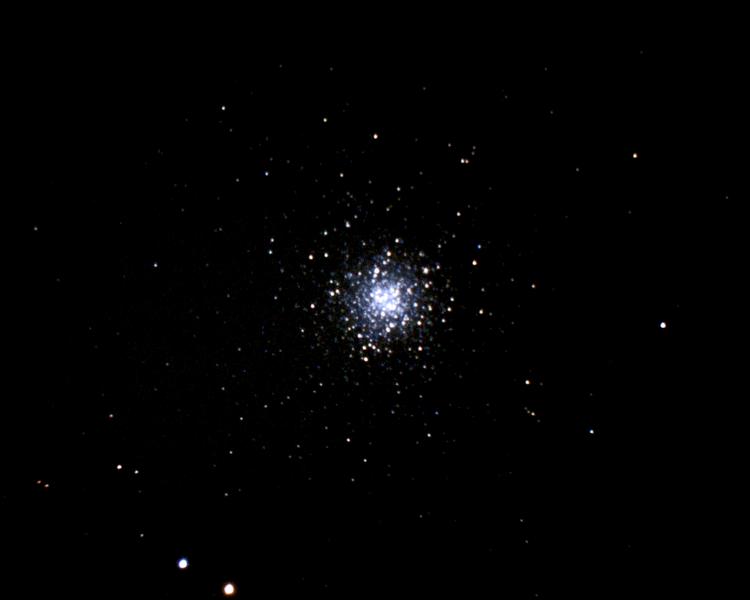 Here's my contribution, from last night:

Processing in IDL and Gimp. 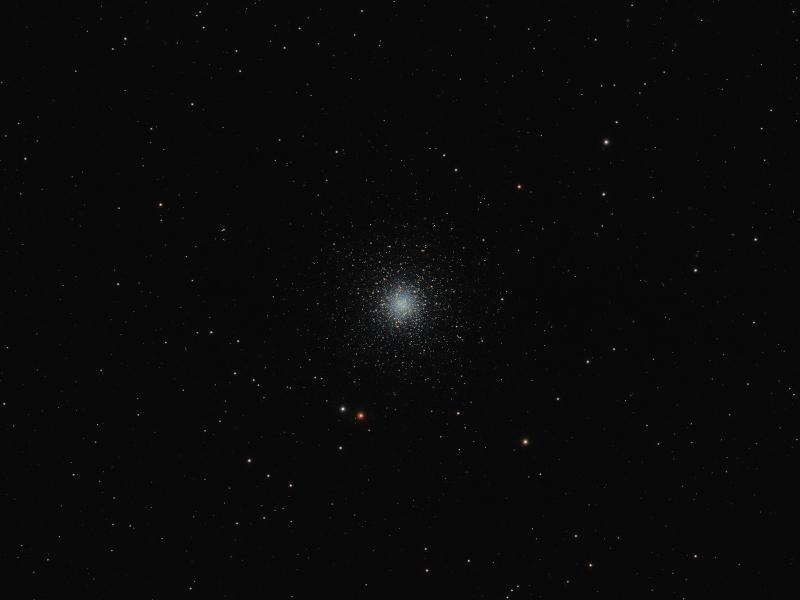 With around 60 x 300 second exposures in each of the filters. Image capture with Voyager, and processed in PixInsight. Resampled and cropped abit to get it under the size limits. Globulars are always those harder than it looks to get them right kind of targets for me. 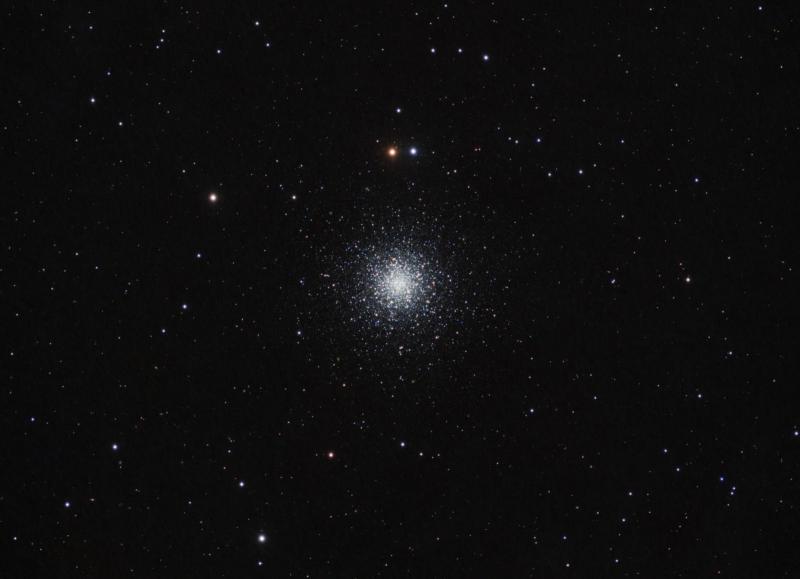 I've been laboring for about 4 months to get a good picture with my new QHY600 camera. There were lots of challenges because of the size of the files it creates. I think that I'm finally back in business now producing astro-photos. I thought that this "close up" was a nice counterpoint to the other lovely wide field images that I've seen in this thread. This is about 4 hours of 3 minute exposures of LRGB data taken Saturday night at my club's dark sky site. 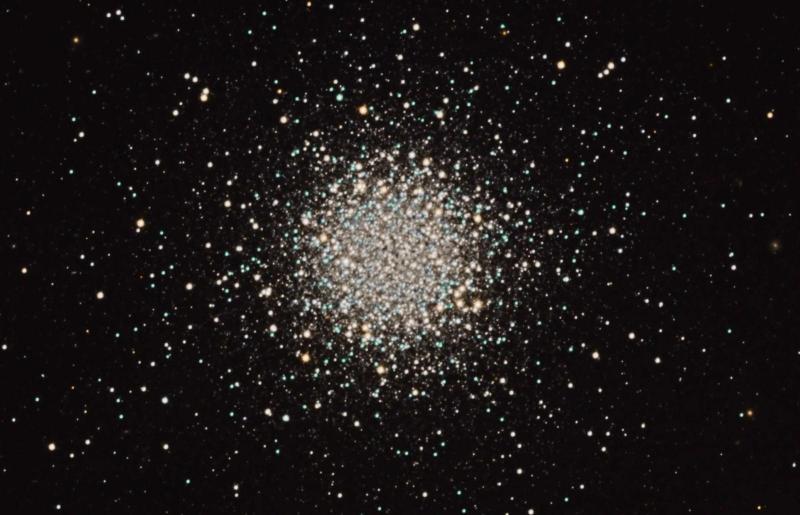 I've been laboring for about 4 months to get a good picture with my new QHY600 camera. There were lots of challenges because of the size of the files it creates. I think that I'm finally back in business now producing astro-photos. I thought that this "close up" was a nice counterpoint to the other lovely wide field images that I've seen in this thread. This is about 4 hours of 3 minute exposures of LRGB data taken Saturday night at my club's dark sky site.

Which scope did you use? Also I am curious about the camera gain and offset settings. My 600M arrives today

The scope is a Planewave CDK12.5 and I used gain of 26 and offset of 10. I used the tutorial on how to set the offset that I found on the QHY website. The gain is a sweet spot that QHY recommends, again on the website. I've had so much trouble getting the whole system (not the camera) working that this is the first real result that I've felt good enough to post. 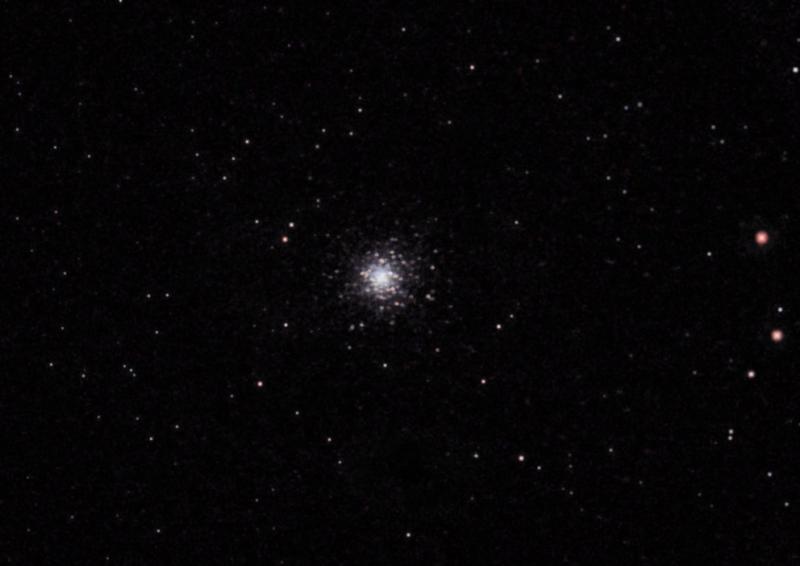 I wanted to get NCG 5053 in the frame as well. I was almost successful with that, it's right on the edge.

Lessons learned.... Don't introduce changes to the data collection process halfway through your imaging project. I started plate solving on 5/20. As a result my framing is all over the place. When I first looked at the staked image, I could see all sorts of rectangular artifacts around the edge. I'm certain that those are the result of inconsistent framing. I'm also thinking that plate solving after a meridian flip is the right thing to do. All things considered, the results are better than I expected. 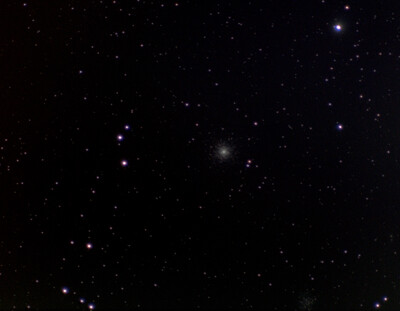 Ok, so this turned out halfway good, IMHO, but as with any activity served to further point out the limitations in both my equipment and my technique.  For your entertainment, the net of four nights' work, two of which actually contributed to the end result.

Night 1 was under a (literally) full Moon, just to see if I could actually image anything under those conditions, and to grab a "contingency image" in case the rest of the month's weather turned out to be bad.  It worked, but the gradients caused by the Moon interacting with the light pollution and the atmospheric conditions were just a bit more than I could filter out.  Interesting image, but I didn't end up using the data.

Night 2, two weeks later, was intended to be The Night.  Ended up a total bust.  This is where the issues with temperature-induced focus drift came to a head, colliding with massive (for this neck of the woods) dew.  I have no dew protection other than the built-in shield, and when you're essentially looking straight up, the dew shield becomes a dew bucket...  Not good.  The results of several hours' images looked like you'd expect, out of focus and under water, being guided by someone with even less optical acuity.  Additional mishaps included my first-ever attempt at a Meridian Flip, where the mighty AVX bashed the camera into the tripod leg as it went by, messing up the alignment.  Nothing a new plate solve couldn't fix, and apparently no damage done, but annoying and a bit scary none the less.  Note to self:  manually move the delicate parts far out of the way with the hand controller BEFORE doing the post-meridian flip.

Night 3 was good, with acceptable image data, and I also captured some data related to the focus issue.  See https://www.cloudyni...fects-on-focus/ for the focus topic.

Night 4 (last night) added more image data, along with some experimentation on PHD2's settings, none of which really helped.  I tried getting a better RA balance, and switched from Predictive PEC to regular guiding, but neither tamed the scope.  Either way, the excursions, primarily in RA, were sufficient to be visible in the shapes of the stars.  Sorry 'bout that.  Result is that I'm re-thinking the priority of a new camera (for Nebula season) vs a new mount (for better guiding).  I might "cheat" and get a reducer first, making the imaging train a bit more numb to aiming errors, and increasing the FoV for the larger targets to come.  It's also half the cost of a new mount...  Focus was better, due to better weather and more frequent refocusing.  Solution there is likely (hopefully) $13 worth of insulation.  We'll see.

Weather for the rest of the week isn't going to be any better, so I'm calling it here with just over 2 hours of total integration.

Stacked in DSS, processed in StarTools, cropped to 61% of original 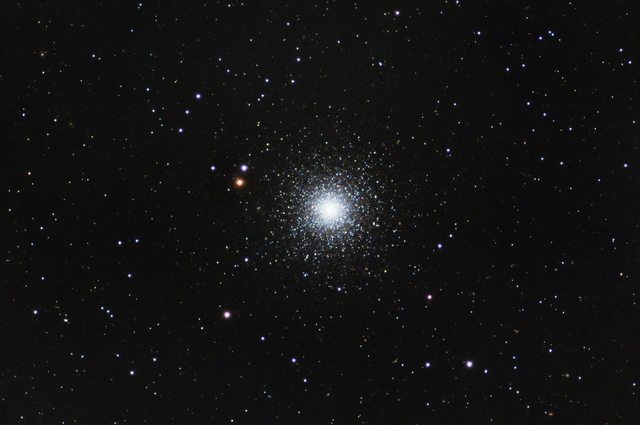 Life got in the way.
So too did some clouds.