Here is Messier 61 showing the recently discovered supernova 2020jfo. The Zwicky Transient Facility (ZTF) at Palomar Observatory reported it on May 6, 2020. Here is my image taken from my observatory on May 14, 2020 using the 16RC and a Sony A7s cooled and modified. This is a stack of 20 - 3 minute subs using a CLS CCD filter. Messier 61 is approximately 52.5 million light years away from Earth in the Virgo cluster of galaxies, in the constellation of Virgo. It is a seyfert 2 galaxy, and it is classified as a starburst galaxy, meaning it has a high rate of active star formation. This is represented in the red areas of the spiral arms/disk. It is also a very active in the production of supernova; eight have been observed since 1926. Directly above M61 is galaxy ngc 4301, and to the right and down by the bright star is ngc 4292. In the upper right corner is a PGC galaxy, from the Principal Galaxies Catalog, pgc 39951. Another interesting feature of Messier 61 is that it contains a rather large amount of neutral hydrogen.  Fun fact on neutral hydrogen, from wikipedia. "The Pioneer plaque, attached to the Pioneer 10 and Pioneer 11 spacecraft, portrays the hyperfine transition of neutral hydrogen and used the wavelength as a standard scale of measurement. For example, the height of the woman in the image is displayed as eight times 21 cm, or 168 cm. Similarly the frequency of the hydrogen spin-flip transition was used for a unit of time in a map to Earth included on the Pioneer plaques and also the Voyager 1 and Voyager 2 probes. On this map, the position of the Sun is portrayed relative to 14 pulsars whose rotation period circa 1977 is given as a multiple of the frequency of the hydrogen spin-flip transition. It is theorized by the plaque's creators that an advanced civilization would then be able to use the locations of these pulsars to locate the Solar System at the time the spacecraft were launched." 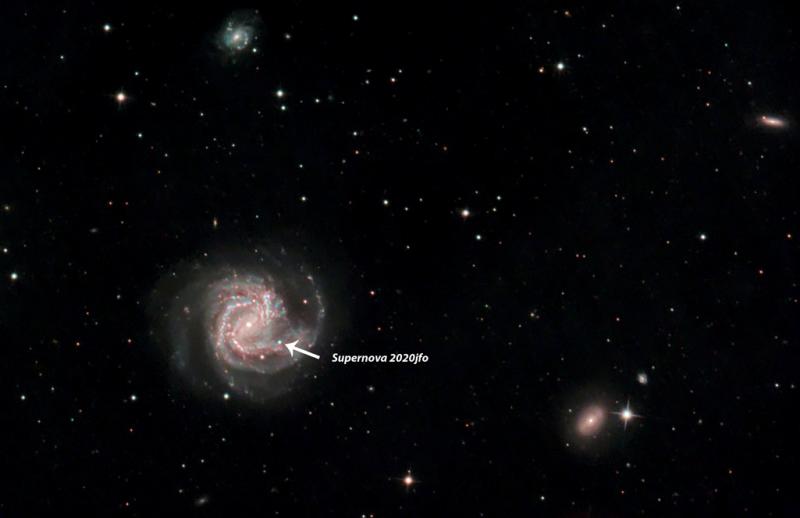 Very well done .
the colors, the details and in addition a supernova.
well done and thank you.

Awesome. Thanks for the heads-up!

So it is at least 2 weeks old now - hopefully it hasn't started to dim yet.