I found the program "Starlock PEC Tool" on the Meade webpage and tried to use it on my LX600, but it can not find the com port, it seems.

I use the right com port as the Autostar updater program can make contact with the telescope through the same port and cable without problems, but Starlock PEC reports "run timeout error 8020".

Has anyone else seen this?

I use a laptop with Windows 10.

Isn't your mount a fork mount?

I don't know if they use PEC.

as meade have changed the format of the data several times recently.

Can you expand on the "lots of bugs in the LX600 PEC". What should I be looking out for??

Most of the bugs are involved in the Non StarLock generated PEC data, esp when doing updates

( I dont have much re altaz PEC in LX600s via Starlock, but not many do that )

For StarLock generated data in Polar the process appears to work OK, but i am currently working with a user

of an LX850, who has used the PEC tool, and at times it has corrupted his data badly.

The LX600/850 share the same PEC "storage" mechanism, so using it to update data may result in grief.

We havent properly defined whats doing it yet.

When I first got my scope wedge mounted I did the whole PEC with multiple update thing. I found watching my image HFR history I could see a cyclic increase and decrease pretty regularly. It seemed the PEC and Starlock were fighting, so I disabled it. Lately I had the opportunity to fine tune my Polar align using Sharpcap's drift align. It showed even after the Starlock Drift align the mount was over 2 MIN in RA and 1.5MIN out of Polar align. I got the mount tuned to just a couple seconds of error now. After also fine tuning my balance I decided to reset and run the PEC with several updates again. I took several long series of images both with and without PEC on...works much better now with PEC on, and no more of the cyclic changes. I haven't used the PEC tool to try smoothing the curves yet...any benefit to doing that? I would like to Meade give us the choice of allowing additional fine tuning of the Starlock Drift align. It's a shame it just stops and says it's good enough.

I took several long series of images both with and without PEC on...works much better now with PEC on,

What i always suggest in a case like this is to use something like PHD2 or PEMPro as a "second opinion".

Do whatever you want to do with Starlock re training the PEC.

Now turn Starlock off and Turn PEC off.

Select a star somewhere near the meridien and between DEC = 0 and your zenith.

Start the "logging" App and collect say 6 turns of the worm.

Now, whilst still logging, simply turn PEC ON and let it run for another 6 turns.

The second part of the plot will show how well the model has corrected it.

I haven't used the PEC tool to try smoothing the curves yet...any benefit to doing that?

IMHO its a toy that you really have no control over.

I only ever use my app to read and smooth the curves, and i dont do Meade based "updates"

as with the non starlock mode, you have no idea if a bad update corrupts a good model.

I prefer to do several clean trains and then deal with them myself externally,

as i can see each run overlaid over the prev runs, so can easily see when things go off the rails

and exclude bad data if i want.

Just for info, i have attached a plot from an LX850 user who was doing trains and updates

Very interesting how corrupt it can become :-)

There was another dataset that introduced massive drift as the final model wasnt normalised properly.

No idea why tho.

I also wouldnt bother with Starlock if drifting, i just use a webcam on the main OTA

set it square to the DEC axle best i can and watch a star on the screen ( relative to a XHair ).

If it drifts, i know my align is off.

If you also log it over time ( say with PEMPro or PHD2 ), you can see the real drift angles "live"

and watch live the effects of tweaking the mount controls. 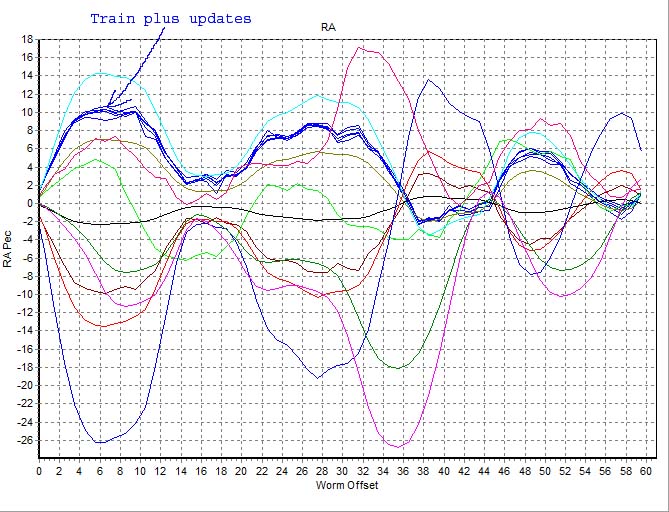 Well I confirmed my alignment is now spot on, no troubles there. I compared the tracking with and with out the PEC with starlock off. Most of the gear revolution was better with the PEC on, but there is a section that it's totally off. Running with PEC off there are some trouble spots. Next clear night I think I will erase the PEC, do a fresh software align and try a single PEC train to see if it is better. The model I'm working with now had 4 updates. After seeing the graph you posted I agree some of the updates cause more error than they correct. It's always something with this hobby, but we learn as we go I guess. Thanks

After seeing the graph you posted I agree some of the updates cause more error than they correct.

Not so sure there.

The train and updates ( if done by StarLock ) all appeared to be very consistent.

The woofy data appeared when using PECTool to tweak the data.

to grab an unguided PEC OFF data grab so you can see what your basic tracking is like.

You can then compare that to the PEC model created by Starlock.