Obviously the ASIAIR has an entire suite of software and can automate a lot of stuff, but if I intend to use automation software like SGP, NINA, or PHD2, is there any real reason to buy the ASIAIR?

Or is the ASIAIR more targeted to new AP players that want an intuitive interface without all the bells and whistles?

ASIAIR is a system including two components, the ASIAIR hardware device, and the ASIAIR App which runs on iOS/Android devices.  It is a closed system (RPi, Linux, Select INDI devices) and does not work with software such as SGP, NINA, ASCOM on Windows PC.

So if your intent is to use Windows, ASCOM, SGP, NINA, etc, than NO, no reason to get the AIR, they are not compatible.

The AIR gives more or less complete functionality without the need for a Windows PC or any other device except your iOS/Android phone (yuck too small) or Tablet.  More or less complete functionality being: GoTo, Platesolving, Guiding, Focus, Simple Sequencing, Live Stacking including Bias, Flat, Dark.  Limited to ZWO Camera’s, ZWO Focuser, and ZWO Filterwheels, and INDI compatible mounts.

I use a Windows PC (MS Surface Pro), running N.I.N.A. (PHD2) for my main imaging rig which while using ZWO Cameras (ASI2600 & ASI290mini), also uses non-ZWO equipment (Flip-Flat, Rotator, Focuser) all on a CEM40 with iPolar.  (The AIR will not support the non-ZWO equipment or iPolar)

I use the ASIAIR Pro to control my portable grab-n-go rig and works extremely well.  Redcat on AZGTi, with all ZWO equipment. ASI294, EFW, EAF, ASI290mini OAG.

Point is, the ASIAIR has no place in the world of Windows, ASCOM, SGP, NINA, etc. 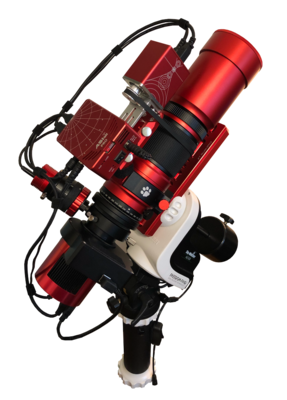 The ASIAir is mostly useful when no other computer is being used. If you will be using a PC for acquisition then you can do everything the ASIAir does and more using the PC.

Thanks for the confirmation!