19 replies to this topic

The Rho Ophiuchi Nebula has been on the menu lately. Though I've imaged it multiple times since 2017, I never appreciated how colorful the area is until this year. Indeed, it's probably the most colorful of all the targets I've captured—it's practically a full representation of the rainbow.

Starnet++ came up in a post recently, so I decided to test it out on the composite image. It runs as a very simple bash shell script, so it was very straightforward to install and run from the Mac OS X Unix command line. It produces excellent results on nebula bodies, but struggles with really bright stars. Fortunately, both the Star Layer Separate and Remove Stars (Large Image) actions in Annie's Astro Actions 7.0 do a much better job on bright stars, so a simple layer mask with one of those fixed it.

So here are the results: 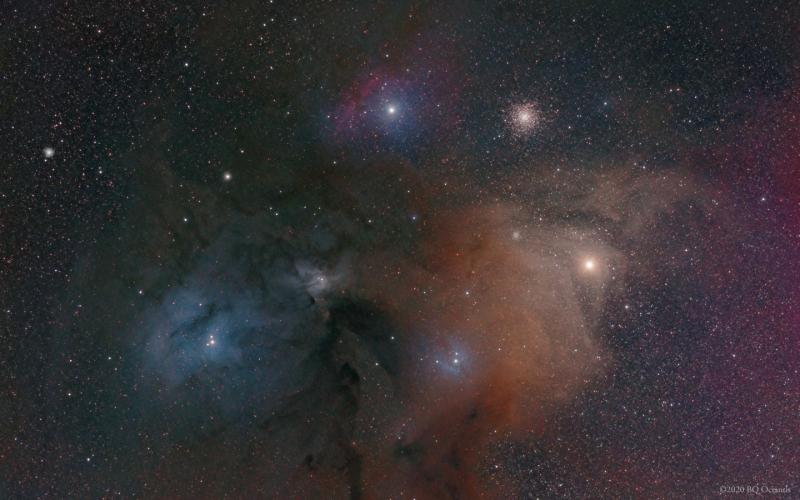 That is gorgeous!  Very nicely framed for that focal length!

There can never be too many images of the Rho-O complex. Simple fact of life.

Your image is absolutely amazing!

beautiful photo,
beautiful colors and the detail is clear.
well done and thank you.

What a gorgeous image!!!

Thanks to all for the likes and kind words!

At larger sizes, there are several crops that make for even more interesting perspectives. Unfortunately, my workflow needs a bit of work for 100% scaling…

I spent another evening working on it with a bit more attention to detail. I was quite happy with the result; I tossed a copy in the 'bin:

You know, the earlier versions were really nice, but this latest one knocks it out of the park! The details in the dust are really sharp.

This is one on my "one of these days...." to dedicate some time and effort on

Images like yours are one of the reasons why it is worth while.

At the beginning, you start out with M42, which is a wow, then maybe the horsehead region, but then, when you get good you go for this one. Congratulations!

And thanks for detailing some of the processing and compilation info, for us aspirants

That is just gorgeous...

Even better. Step down ring as aperture mask, why didn't I think of that?

Thanks again to all for the feedback!

I'll admit the aperture mask idea came from a now-forgotten CN post I came across last year. While I originally felt diaphragm spikes were distinctive of AP from camera lenses, they became an embuggerance in processing when I went to to combine images from different lenses. So I bought 52mm and 58mm step-down rings to test in January, and the 52mm was the clear winner for round stars to the edges. The additional benefit is greater contrast and detail in the brighter areas. Unfortunately, on my stock 600D/T3i, it comes at the expense of almost any red data in the darker areas of the scene.

I spent another evening with the data. And I learned an important lesson: starnet++ makes the noise in my 52mm data much worse than it is. So it's better to add the 52mm data to the f/2.8 data with stars first (with the f/2.8 data as the base), then starnet++ the resultant image. From there I can add back the stars from the 52mm image and tweak the background to my heart's content: 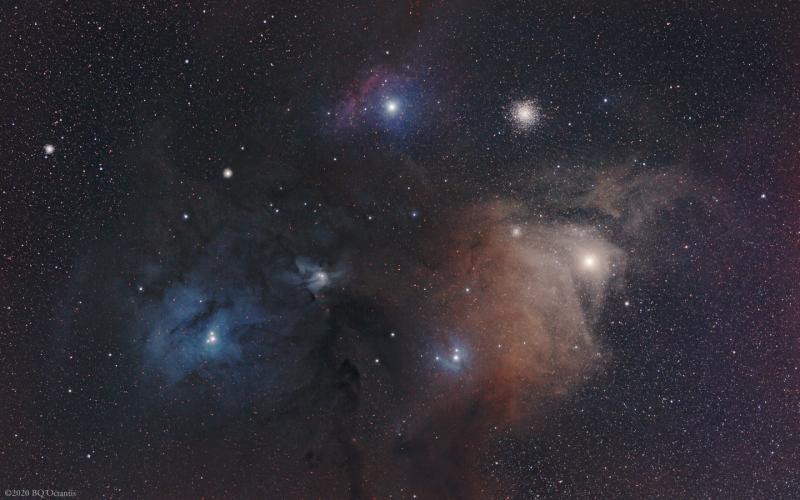 A piece of artistry!

Thanks Juno & Herman! And thanks to all for the new likes!

The Rho Ophiuchi Nebula is the most spectacular nebula I have ever captured. I don't know of another DSO target accessible to a 200mm lens on a plain vanilla DSLR with this spectrum of colors. I mean it even has greens of all colors! And it's been a great target to learn on—almost any experimental technique yields a new and interesting result no less like a painting.


Also tagged with one or more of these keywords: dslr, dso, astrophotography