My second question is can I use a LX200 hand controller on a LXD650 mount ?

As far as the drive motors are concerned, either the 12V drive system or the 18V system can be used with the same motors.

No, you can not mix and match components from the different systems. The LX200 and #1697 hand controllers are basic "dumb" input/output devices. The database and operating software is in the Main drive boards. If you want a GOTO system you need the whole #1697 CDS electronics package which replaces the #1664 electronics.

Can I use with it a 12V power supply (in order to reduce the risque for capacitor) ?

Is the LX200 hand controller the same than the LXD one ?

I have been told the hand controllers are the same for the LX200 Classic, and the LXD650/LXD750. The electronics are the same even though the PCBs are different and connected differently. Not 100% sure, but pretty sure.

The 1664 was an option for the Meade refractor mounts as was the 1697. Here's a quote from a PDF I found online for the refractors:

"Motor Drive Systems: Factory pre-installed on all Meade apochromatic models as standard-equipment are two DC servo motors, one each inside the polar and declination axes.  Installing either of the optional drive systems requires no more than a few minutes and entails simple plug-in connection of the declination motor to the power panel and attachment of the power panel to the declination casting.  Alternately, either the #1664 EDS or #1697 CDS may be factory-installed at no additional cost, if requested at the time of order.  Once installed, the drive system is totally integrated to the mount, with no motors or electronics externally visible. Either drive system, #1664 or #1697, may be added to any Meade APO model; each includes a 25 ft. cord and adapter for operation from any 115v AC outlet."

You can certainly use 12V for either the original 12V drives or the newer 18V drives, the motors are the same. Meade bumped the voltage up to 18V for faster slewing and didn't make any changes to the electronics. That was part of the reason that the caps had a tendency to blow, because they were being operated with less of a safety margin. It might not have been a problem if Meade hadn't used an unregulated 18V power supply that could often spank the caps with voltage spikes very close to, or over their maximum operating voltage.

Conventional wisdom with those old systems is to change out the caps regardless, because there is no way of knowing how many voltage spikes the capacitors have taken over their lifetime. Your situation is a bit of an anomaly because you say your electronics are "new" so it could be assumed they haven't been abused by the voltage spikes. It could be argued you'd be perfectly safe running your system @ 12V which is the design voltage. My only concern is I've read the epoxy used in the capacitors dries out over time which may lead to failure. The problem with these old style capacitors is they fail by shorting out which can cause damage to other components. Newer style caps can still fail, but they don't short and go up in flames.

Since you say you have two sets of #1664 electronics, you certainly have a back-up should one fail and that would tell you if you needed to replace the caps in the spare set. I'm not familiar with what kind of hand controller the #1164 uses. If I had to take a guess, I'd say it was different than the LX200 and #1697 controller so if you don't have a #1664 handbox, you may be stuck until you find one.

I recently put my LX200 scope into storage, but am still using my LXD650 with the #1697 CDS system. I should be visiting the storage unit in the next week or so and I'll see if I can easily get to my LX200 handbox. If I can, I'll grab it, bring it home and try it out on my 650. I suspect they are the same because the controllers are just dumb input/readout devices and the software is "almost" the same for the two mounts, the difference being no Alt-Az option on the #1697 and differing start-up positions. In my mind that shouldn't effect how the mounts communicate with the hand controllers. They look identical but they do have different firmware numbers so I'm not 100% sure.

To directly answer your question on the differences between the 600 and 650 mounts - The only difference I'm aware of is the LXD 600 mount was a 12V mount, and the 650 was RUN at 18V. It's important to note, that the two mounts are identical, physically and the electronics are the same, which is why I underlined the word "RUN."  The only change Meade made between the two models was changing the separate power supply from 12V to 18V,  re-printing of the power panel voltage labeling, and changing the model number of the mount to 650.

In the process of restoring both.

Tom - For the LXD 750 mount you mention replacing the 5 caps on the mount and handset.  Can you suggest any specs - uF and voltage?  Tantalum?

Also - the mount is powered by a 18V DC source.  I appreciate the motors are 12V and the manual indicates any 12-18V PS should be fine.  I tried running the mount with mu 12V powertank and although the current indicator lights up and I can hear the motors hum....the handset will not progress any further than the "MEADE"  greeting.  Any suggestions to try to get this resolved?

Also - did anyone ever get a chance to follow up to see if the LX200 classic handset was interchangeable for this unit?

Thanks for any help and would appreciate any and all advice on use/restoring this massive mount! 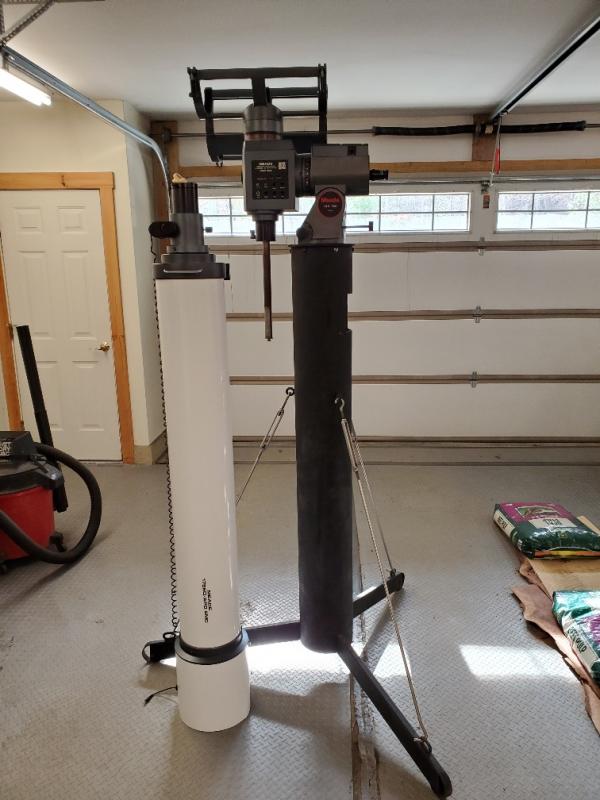 I have the same mount and scope as you. A couple of years ago I installed an upgrade kit from https://groups.io/g/LX200Astar, which is the Meade Audiostar hand controller and a replacement panel on the mount. It works fine, the goto is pretty good and it tracks well. Sounds a little weird though when the motors are running.

I also vastly improved the optics by centering the lens. Now I get to see details on Mars that I cannot see with my other scope, a Vixen SS115 refractor.

I went 20 years struggling with the original handset, and with badly-centered optics, and was ready to sell the thing, but when I bought my Vixen I had plenty of spare time to mess with the Meade like this. The three things I did to make me fall back in love with the scope again were:

1. Change the control panel, see above for where to get it. I think it was around $700.

3. After endlessly messing with all the settings, I ended up just doing a reset from the controller and starting from scratch. From then on, the easy alignment works and I can at least get by with rough goto accuracy and good tracking stability.

I have mine on the giant tripod, and when I extend the legs a bit, the thing towers above me! I think of it as a collector's item now, so I don't expect modern high-end optical views, but I tell you, seeing open clusters and Mars was just awesome, and the moon is just beautiful. Can't wait for it to be above -20 so I can stay out a bit!