Good evening, everyone here on the Observational Astrophysics forum.

I have 2 carbon stars for you.

Both are within the boundaries of Corona Borealis.

Much to my embarrassment I have never observed in my entire life the variable star R Coronae Borealis.

High time to put that right!

Also much to my surprise I never realised that it is a carbon star - albeit not a very obvious one.

On the famous website www.aavso.org the good people there say its spectral class of C0.

So it must be a very hot star.

On having done some further research by reading Robert Burnham's Celestial Handbook Volume 2, I discovered that there is up to 67% carbon on the star's atmosphere.

That is official enough for me. It's a carbon star. So off I went to find it.

As the star is bright in magnitude at about 6.0 or a little bit fainter, I had no problems finding it at 11X through my William Optics 70 mm F/6 small apochromatic refractor.

From my position in Dublin, Ireland R Coronae is directly north of Delta Crb by a short distance.

The higher I went the more distinctive the colour became though - which is normal. However it still counts as a carbon star even though Burnham says that the authorities in the past classify it as type F7, G, or even M.

The star has had a very colourful history because its sudden decline of its magnitude since it was first observed by Edward Pigott who lived from 1753 to 1825.

Burnham states that it is a very remarkable variable star.

It stays at maximum magnitude throughout most of its cycle.

But then it suddenly begins to fade and in a few weeks and it could drop down to magnitude 15.

Indeed it has been known to fluctuate erratically during the last 150 years.

A dark soot cloud appears to be the most popular theory as to what causes the major dimming of the star.

The cloud covers the star causing it to dim.

So there must be all sorts of strange goings on within R Crb.

That's why it has had over 300,000 observers throughout its history on the AAVSO website.

My 2nd carbon star on Corona Borealis is V Coronae Borealis. Its spectral class is C6 or N2.

As midnight occurred it meant I could start my 60th birthday celebrations.

I was observing V Crb at just 40X through my main 158 mm refractor at the time.

Then my smartphone had to be answered.

A good friend wanted to wish me Happy Birthday which was fair enough.

But I had enough time to see that V Crb has a fairly decent orange colour.

I did observe this carbon star back in May 2002.

So it was nice to find it once again.

As far as I know, there are no more carbon stars in this compact constellation. 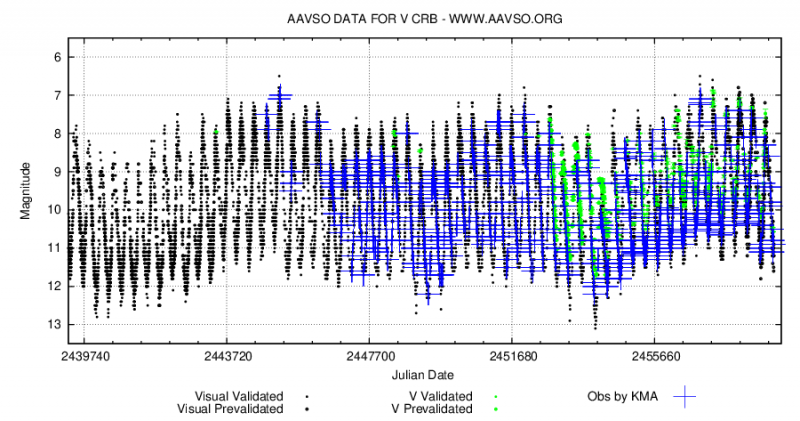 My best wishes for your Birthday

At a time of your observation of V CrB

I was sending my report 10.9m visual to AAVSO.

I was also curious about magnitude history of this variable

Do I see on very long period with 357d normal one ?

I haven't observed R CrB but I've observed V CrB which I described as bright orange in my 10" refl.

Thank you so much, Rich, for your contribution.

It's nice to know someone is observing the odd carbon star.

I'm just taking note here that I have observed 13 new carbon stars so far in 2020 which I have not observed before.

I would have been lost without it!