What is pressure tuning and how does it work?

What is pressure tuning on the Lunt Ha telescopes?

How does it work? Is it any good?

How does it compare to the PST Etalon tuning?

here foud this for you .

Sealing of the tuner threads is a must, a leak will alter results or prevent achieving results

I have owned both, both work, I took me a little longer to get used to PT.   A steady strong mount helps as you do crank on the stiff PT knob.  I have found that I can remove the Lunt from storage and it retains adjustment w/ very little touch up.

Sorry, but air pressure does not tilt the Etalon.

The Etalon is mounted in a chamber that is filled with air.  The Etalon itself is not sealed so that there is no pressure differential from the space between the Etalon plates and the rest of the cavity.  The pressure does not deform or bend the plates of the Etalon. Nothing moves, nothing but the air pressure changes.

The pressure in the air chamber changes the refractive index of the air, and this shifts the tuning band. Essentially the difference in pressure slightly changes the speed at which the light passes back and forth in the chamber (doppler tuning)  and this very slight difference in the resonance between the two plates is what changes the tuning (or at least this is they way it is described by Lunt.

Have a look at this January 2015 post by BYoesle and especially his other lengthy post on etalon basics that he links to. Also very helpful is "H-alpha Solar Telescopes – an in-depth discussion and survey."

When the O-rings around the piston inside the pressure tuning cylinder wear out, they can easily be replaced without having to send the scope in for service. See this page on Lunt's website for more info.

The PST uses tilt tuning to change alter the band pass of the Etalon. An Etalon is simply two extremely finely finished plates with some mirroriing that are spaced at a distance that creates a resonance, and the spacing between the two inner surfaces is selected so that at the resonance point, the light continues through the rear plate.

When you use the lever to tune the PST, what you are doing is very slightly tilting the filter to the optical axis.  This modifies the resonant frequency of the Etalon and you tilt it until the frequency is on the H-a band. Now when you tilt the Etalon, this causes you to loose a bit of finesse in the image. Rather than passing straight though the plate, the light passes through it at a very tiny angle and this induces some tiny amount of error.  Also, even as flat as the plates of glass are, even very tiny deviations will cause parts of the field to be at slightly different bands (and this is called "Banding"}.  For example, if you put the sun in one part of the field, you may see better or worse performance than if the sun is at a different point in the field, and in fact, it could be that the best performance is found when the sun is slightly away from the center of the field.

Now importantly, one of the characteristics of the tilt tuned Etalon (and a big hint at what is going on with the pressure tuning) is that as the barometric pressure changes, the tilt of the Etalon will have to be adjusted slightly because the speed of light changes in the air, and it changes with the pressure of the air.

So what if you just mount the Etalon plates (slightly reflective glass) in a chamber and vary the air pressure in the chamber?  Now you can change the tuning simply by changing the air pressure!  Brilliant. Since the plates don't move and don't tilt, they remain perfectly parallel to the optical axis.  There is no finesses degradation and (less banding) though even here, it is possible that the best part of the field will not be when the sun is at the exact center of the field).

It is hard to say  pressure tuning is absolutely better, but I have owned three tilt tuned solar scopes and two pressure tuned scopes and I find the pressure tuned scopes to be better in general.  There is no banding (though again, there can be a case the entire field is not at the same band but it is fixed where as in the tilt tuned, it can move around a bit).  Also, a well broken in pressure tuner can maintain tube many days in a row.  If I bring out my Lunt 80, it can go days and days and not need to be retuned (unless I want to doppler tune for different features). Now in time, the tuning will need to be tweaked, and in a longer period of time it may run out of range, and when this happens, the large brass tuning knob is removed to let a new charge of air into the chamber.

Both are Etalons and both work under the same general principle of creating a resonant chamber and both allow you to view the sun in hydrogen alpha.  The quality of the Etalon is probably more important than whether it is tilt tuned or pressure tuned, but again, in my experience, the pressure tuned scopes have provided fields that are much less affected by banding and provide very fine detail.

And some people think that the pressure in some way changes the spacing by bending the plates or compressing them closer together of something like that.   None of this happens.  The plates are mounted inside the pressure cavity and the pressure in the entire cavity (on both sides of the plates and between the plates) changes everywhere at the same time.  No stress or unequal pressure is put on the plates.

Here's another thread about sweet spots and etalon tuning that may be of interest.

I don't know where the persistent belief that the PST etalon is tilt tuned comes from. The relevant patents, US 7,054,518 B2 and US 7,149,377 B2, make it clear that the etalon is tuned by compressing the spacers, the foam ring is to make the compression force symmetrical. Dismantling a PST etalon confirms this, it's built exactly as the patents show. People find it hard to believe that the spacers can be compressed, but on the spatial scale (sub-micron) involved it works just fine. You might convince yourself that they patented one thing and built another, but take one apart and see.

I don't know where the persistent belief that the PST etalon is tilt tuned comes from. The relevant patents, US 7,054,518 B2 and US 7,149,377 B2, make it clear that the etalon is tuned by compressing the spacers, the foam ring is to make the compression force symmetrical. Dismantling a PST etalon confirms this, it's built exactly as the patents show. People find it hard to believe that the spacers can be compressed, but on the spatial scale (sub-micron) involved it works just fine. You might convince yourself that they patented one thing and built another, but take one apart and see.

I  have taken a number of PST apart and recontacted the Etalons. The tuning mechnanism is that the Etalon is sitting against a foam ring and as the foam is compressed the Etalon tilts to tune it. It is that simple You can see the Etalon tilt by a number of degrees  when you look down into the scope thru the objective . The Etalons plates are about 1/2" thick with Quartz spacers so the force needed to change the shape would be very high.   The foam that Etalon sets against would have to full compressed first before any pressure would be applied to the Etalon, with a force need to change the spacing  of the plates. The patent may states one thing but mechanism is tilt tuning.

Show us, Dave. Photos of what in the etalon mounting tilts the etalon would be illuminating. I'd love to see one that's different from those I've already examined. Maybe there's a new generation of these I'm not familiar with.

I'll do my best to show you. As engineer and someone who has been making optics  includes optical flats or years the fact the Etalon is mounted in foam, you can not put any more pressure on it that the compliance of the foam. That is too small to cause the pressure needed to deform the plates and  quartz spacers. These are solid quartz spacers that at optically contact to the surface so the only compliance is the compression of the Quartz. The fact that you can see the Etalon tilt as you tune it and the fact that the there are a couple of positions were the Etalon comes on band then off indicates it is simple tilting that cause the CWL shift. The foam does not put even pressure on the Etalon simple by the fact is a closed cell construction with random size air pockets.  The Etalon is just simply rock in the foam as it is compressed and that is what causes the tuning.

I came home from work and it is a nice Sunny afternoon so I took my dual mounted PST on tracking mount out for a look. Very nice Proms visible. So to illustrate the tilt tuning of the Etalon,  I detuned it and because it is tilting, the reflection off the  front gold  surface of the sunlight was hitting the left side of  the. tube. I then tuned the Etalon back on band which was about 1/4 turn of the tuning ring and the reflection was at the top of the tube and now just barely hitting the inside of tube.  I have attached two pictures showing this that were taken maybe 30 seconds apart.

The tilting of the Etalon by a number of degrees would have orders of magnitudes greater effect in shifting the CWL then any pressure applied to the solid Quartz spacer by the foam  between the two thick Etalon plates.

The designer of the PST needed a simple and cost effective method of tuning the Etalon. They came up with simple method of having the Etalon rock in the foam as it is compressed vs a more complex  and costly mechanical tilting  system. 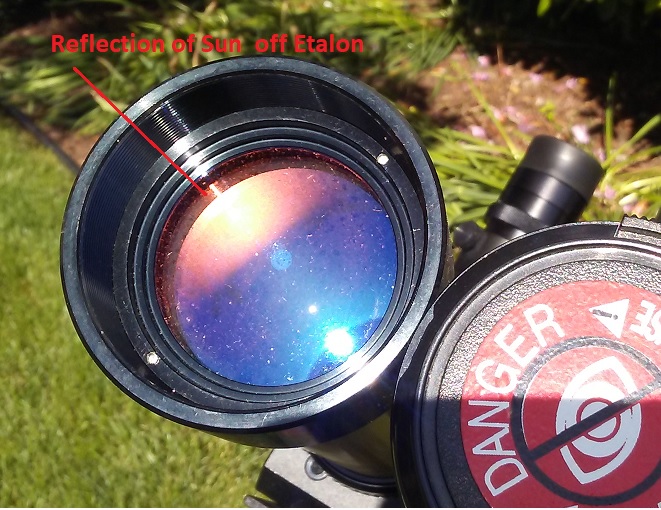 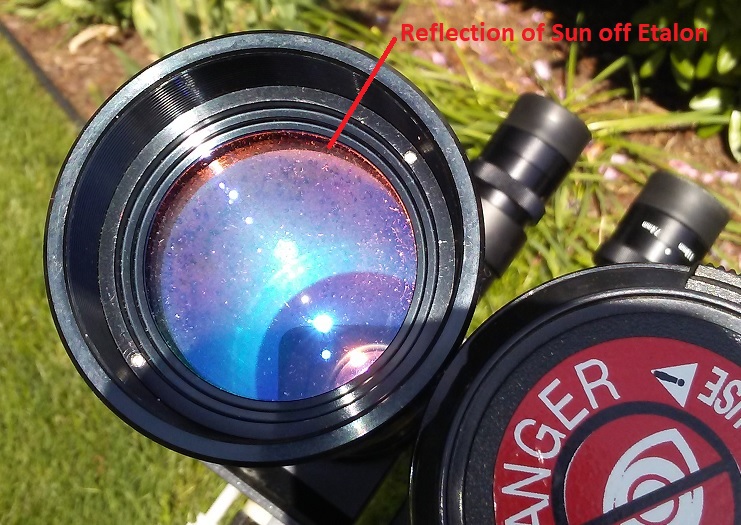