I have read a lot of posts that say the ASI174MM is perfect for imaging the Sun, but is has such large pixels, 5.86um. IS that a bit too much for detail on the Sun's surface?

Wouldn't something like the ASI290MM be a better imager for small details on the Solar Surface?

It's all depends on your focal ratio and the wavelength you are imaging.  Here is a great tool to figure which camera you need to use at any wavelength you pick and the size of your scope.  You may need a barlow or a reducer or an aperture mask to achieve the desired focal ratio you need for optimal sampling.

I have read a lot of posts that say the ASI174MM is perfect for imaging the Sun, but is has such large pixels, 5.86um. IS that a bit too much for detail on the Sun's surface?

Wouldn't something like the ASI290MM be a better imager for small details on the Solar Surface?

The IMX174 sensor is a great sensor for its time. But, it's 5.86um pixels say a lot. This critically samples around F22 with 656nm wavelength. So, imaging at F22 means very rarely are you looking at full discs. This sensor is much better suited to high resolution imaging with longer focal ratios, like with Daystar options or other systems that commonly operate in the F40+ range and can take focal reducers to get to F20~22. To use this with smaller scopes with shorter focal-ratios, you need to increase the focal-ratio significantly to get near the critical sampling point. Undersampling severely with big pixels like this loses data and so you're not getting the detail you could get with smaller pixels in the same configuration.

It's a good camera. But like many things, it's not just a magic bullet. Selecting a camera, it's important to look at sensor size for FOV results and the relative size of the sensor compared to the blocking filter of your system (commonly small); then looking at pixel size and the resulting critical sampling point at your wavelength you plan to record, if you care about recording the angular resolution of it as much as you can; and then of course, combining this and seeing what overall speed this can be done at, as higher FPS is better when lucky imaging.

My combination is a Lunt LS60 THAD (tilt tuned) with a B1200 filter and 174mm camera. I use a 3X barlow in double stack mode 60/50 most of the time. Being new to solar imaging I rely on lucky imaging, mainly because my old techno challenged brain does not comprehend most of the info I pick up on this thread. I'm still learning SharpCap although most of the excellent imagers use FireCapture. This combination of scope and camera is all I will be using. I realize my combos limitations. My question is would I get better results using a 290 mm? Or continue with the 174 mm. Attached is an image of the plages from 5/19/2020 using the above combination. Click image for full size. 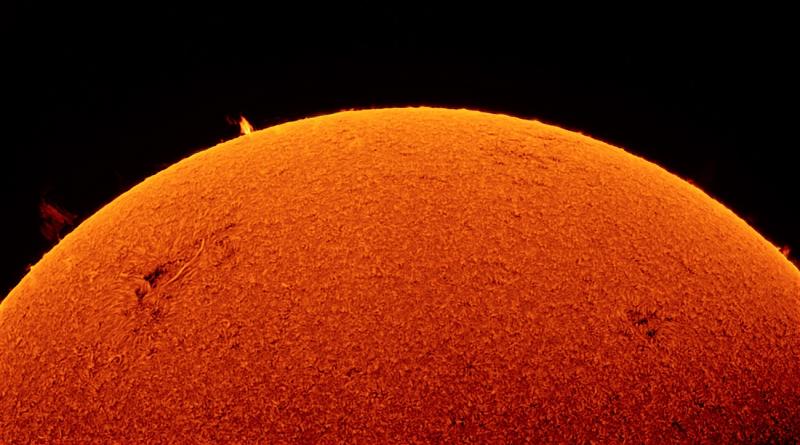 My question is would I get better results using a 290 mm? Or continue with the 174 mm. Attached is an image of the plages from 5/19/2020 using the above combination. Click image for full size.

You'll find these two sensors compete for nearly the same thing and actually are very similar in real-world results in terms of sensitivity despite having different graphs/quantum efficiency (IMX174 has 77% QuantumEfficiency, and the 290MM has 80% QuntumEfficiency). There's also noise characteristics that are different here too. And it's due to surface area. The big pixels of the IMX174 gather more light, physically, across the 5.86um size pixel. The 290MM has much smaller pixels, 2.9um and its a smaller sensor. Less light physically hits the 2.9um pixel in the same time, if you think about comparing surface areas without context. But in context, think about the same size image circle at the same image scale on the two surfaces with the two size pixels the end result is that they receive almost the same amount of light in that sense. I have both cameras and I've done this and got the same results to confirm it, but these two essentially get the same results in terms of imaging. The real difference is having to use more glass bits and stuff to achieve the focal-ratio that is appropriate for the larger 5.86um pixels with the IMX174, and the simplified imaging train with the smaller 2.9um pixels of the 290MM. And of course the field of view difference, as the IMX174 is a larger sensor than the 290MM (that said, if you match image scales, the FOV will be nearly the same!).

So in your situation, using the Lunt 60mm at F8.3 but with a 50mm Double Stack filter making it actually F9.9, 656nm is sampled critically on the 5.86um pixels of the IMX174 at F22. So ideally, you only need a 2x barlow to achieve F19.9 which is very close to F22 and undersampling just a bit, or if you could use a 2.5x barlow to hit F24.9 is also close to F22, but over sampling a bit. Using a 3x barlow, you're oversampling considerably at F29.8 and you don't gain anything from this, it just costs you more gain on the camera to get exposure as no more resolution is obtained after the critical sampling point is met for the pixel pitch of 5.86um calculated for 656nm wavelength. If you're only using the 60mm without the 50mm double stack, and you're at F8.3, then a 3x puts you at F24.9 and it's close to critical sampling F22, or a 2.5x puts you at F20.75 which is very close to F22 for critical sampling. So your setup with the 60/50 together is ideal with a 2x or 2.5x barlow on the 5.86um pixels at 656nm and your setup with just the 60 is ideal with the 2.5x or 3x barlow on the same platform.

The 290MM's 2.9um pixels critically sample 656nm at F10.9. So if you used it natively with the Lunt 60 at F8.3, it's close, but undersampling a little bit. But it would be very hard to find a barlow that only magnifies 1.25x (but it exists, such as a Baader Glass Path Corrector that is truly 1.25x). But, if you think about it, the 60/50 combination is actually F9.9.... so its really close to critical sample limit of F10.9 on its own with nothing to be added, no barlow, no extra glass, no other surfaces involved.

Identical resolution, almost identical FOV (the FOV of the IMX174 is just a bit bigger). But again, they actually are the same image scale and resolution here in their appropriate critically sampling configurations above.

So at this point, the only difference is.... the IMX174 uses a barlow to achieve its results, more glass in the pathway, but this isn't a big deal. And the 290MM does not and just plugs in and is good to go without a barlow. The 290MM technically is a more sensitive pixel, but it's tiny so physically gets less photons in the same time as the IMX174. The IMX174 gets more photons physically in the same amount of time, larger surface area, but its technically a bit less sensitive (older tech) so they end up being nearly equal at this job as their sizes off set their sensitivities. So there's really no advantage either way.

Summary..... no advantage either way really, except that the 290MM is less expensive and doesn't need a 2x or 3x barlow to do this. The IMX174 is more expensive and needs barlows/reducers which adds to cost and complexity of imaging train. But technically no real advantage and the exposures you will get are very nearly the same. The resolution is actually the same and the image scale is the same!

Keep using what you're using.

(the 290 is useful when you want to remove all extra glass in the pathway or if using a barlow/extender effects focus position, etc, and of course, its newer and less expensive, but it actually does the same job as the IMX174 sensor does when both are used at the same critical sampling point and image scale in HA; when you're imaging at very short wavelength like 393nm CaK, this becomes more and more an issue when you're needing very, very long focal-ratios to critical sample and having exotic amounts of 3x, 4x, 5x barlows just adds to cost when a smaller pixel can do it with less)

Thanks Marty. That is a heap of info to digest. I have a 2X barlow and will try it out. Your posts are golden.

While I'm not nearly as knowledgeable as others in this thread, in my limited experience I've come to like the flexibility of smaller pixels.  I can use a reducer to get full disc or near full disc views without undersampling, and then use the camera for native or higher res work even though I end up massively oversampling.  Given I like doing everything from full disc to maxing out the seeing for the day, no single camera will be perfectly optimal for each scenario, so I like to error on the side of too much resolution, especially since the cameras are sensitive enough to capture disc+proms in a single shot in spite of the pixels being smaller and thus exposed to fewer photons per pixel.

Using the 178mm on the lunt 100, the camera with reducer still picked up all the proms without needing a second exposure just to bring them out, and with the 2.5x barlow the exposures were still well under 10ms with just a little gain, so still plenty of light/sensitivity in spite of being massively oversampled.

So if you all ready have the 290mm with its small pixels, I'd say keep on using that.  Or if not and you are gonna be buying, the 178mm is a good balance for price, small pixels and sensor size that I've been happy with.

One thing to note though, while there are ways around it much (but not all) of the time, both the 174 and the 178 when used in h-alpha can suffer from sensor pattern noise that can at times severely limit how much sharpening/deconvolution you can do on an image after stacking it.  Its something I'd read up on before buying just to make sure its something you are okay with.  In fact, with the full disc image below from today, I wanted to continue sharpening it, but since the details were on the same scale as the sensor pattern noise, I was unable to go any further.  If you go to a full size version of it and look at the top half of the disc, you'll see the horizontal banding that is the dreaded sensor pattern noise.  Not visible when looking at the image as a whole, but certainly visible when pixel peeping.  Since the details of the second image were on a much larger scale, it wasn't an issue when deconvolving it. 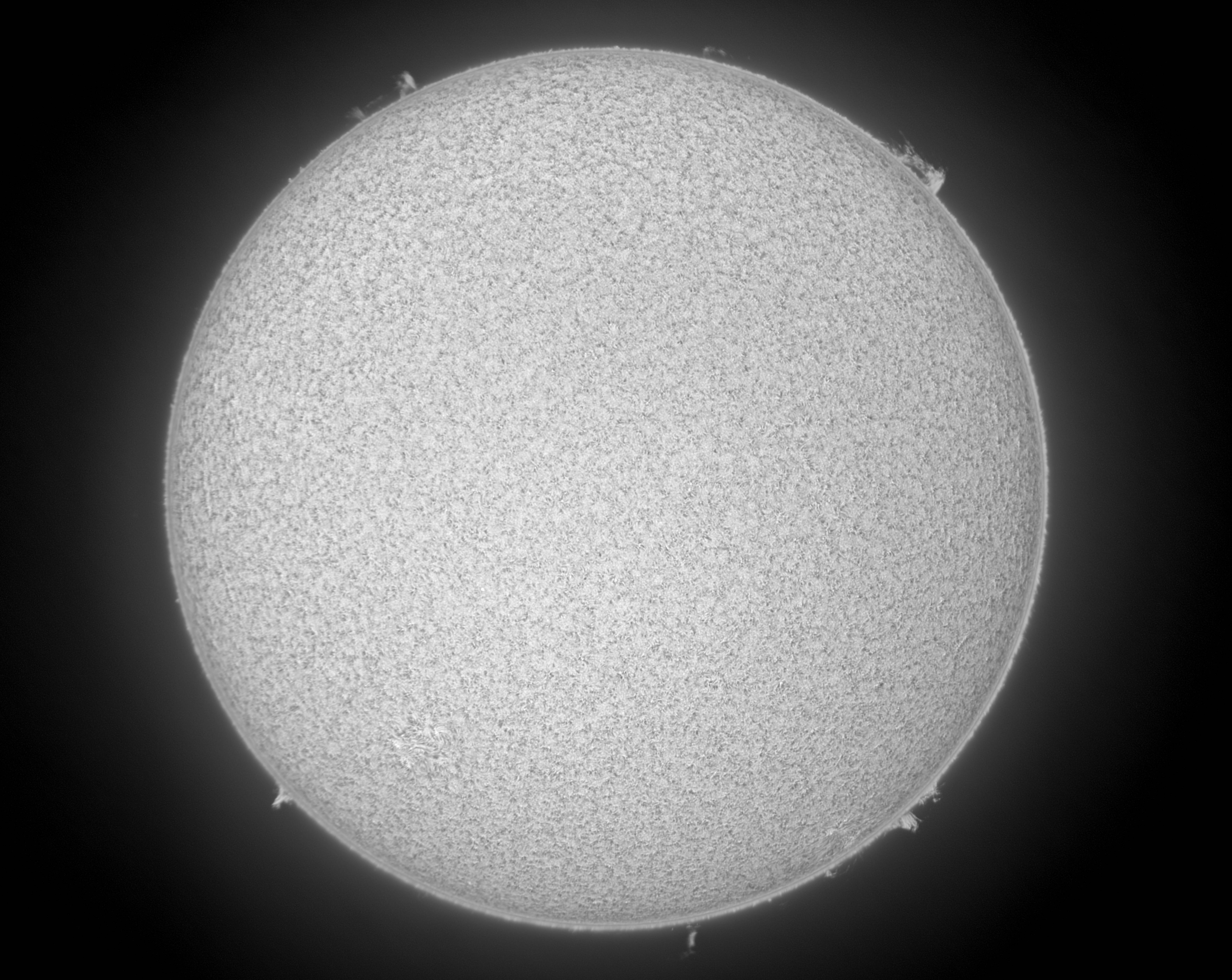 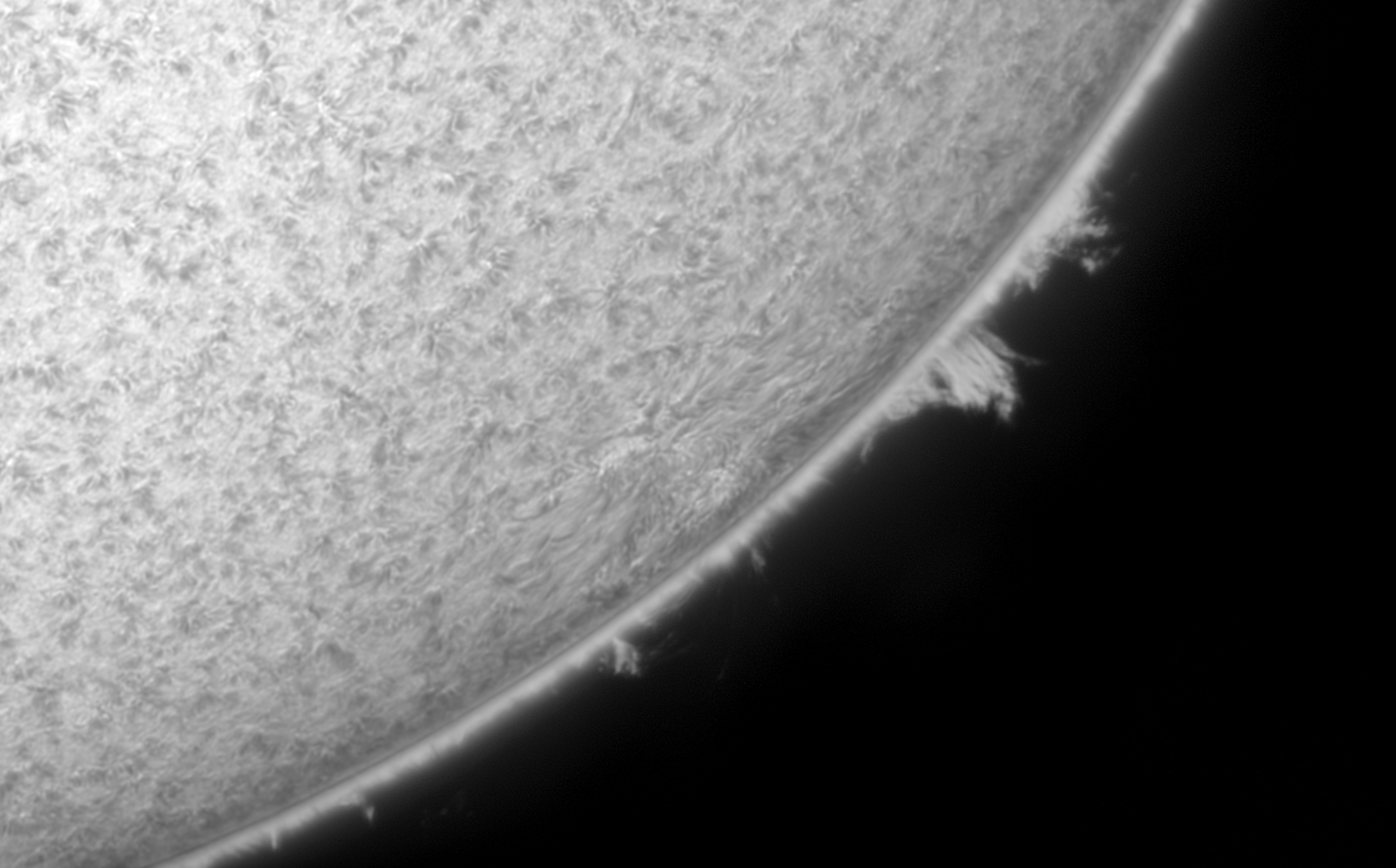 Great images especially the close-up AM.