We're in a bit of a detached mood atm, after thinking the Pathfinder's electronics were sorted we headed off for Carrieton on Monday last but didn't even make it to the bottom of the expressway leading into Adelaide before having to turn around & go back to the mechanic: a couple of nights back I dropped in to see what progress was happening & he thought he was narrowing the situation down (more than before, that is!

) but when I went back last night he wasn't at work (he owns the business) because he was off sick with what seemed like a cold...but in today's world you have to be very cautious about such things!

I hope he's ok & it's a bit selfish but I'm one of those "more vulnerable" people & I spent some time at close quarters with him the other night so I worry a bit about myself - & Pattie more of course...

Anyway, "que sera" cos there's not much we can do but stay at home & wait...leaving aside my more worrying nature on that subject we need to have the vehicle fixed to get a decent trade-in on a new vehicle, as we've made up our minds to purchase a new 4WD if everything works out ok: the night before last we decided we'd image yesterday morning or this morning...more likelihood of clouds yesty, but poorer wind situations this morning...

Opted for yesty morn but when we first got up around midnight or so streaky cloud was everywhere so with quite a deal of reluctance we pulled out the ASI224MC...nothing but high opinions for this great osc but we had thought we'd seen the last of using it & could concentrate on mono imaging again...what I can say after shifting back to mono for the last few sessions is that a colour cam makes you very lazy!

But with the conditions it would've been silly to mono image: we captured until about 2:30am with rubbish seeing then took a 1 hour nap before re-commencing around 3:45am where the seeing had lifted somewhat - not great but enough to get this passable image of Jove below.

Throughout these captures Jove was fluctuating like a light globe about to go on the blink - such was the amount of high-level cloud - but we kept at it to garner enough decent frames way, way after culmination...& as the sky was becoming very bright we had a stab at Mars: still misty clouds floating across our line of sight but in 4 avi's again garnered enough frames for a (semi-presentable) image...

Hopefully we'll come out the other side of all this smiling & are really aching to head bush where we're pretty sure we'll find the seeing we wish for - & enjoy ourselves regardless! 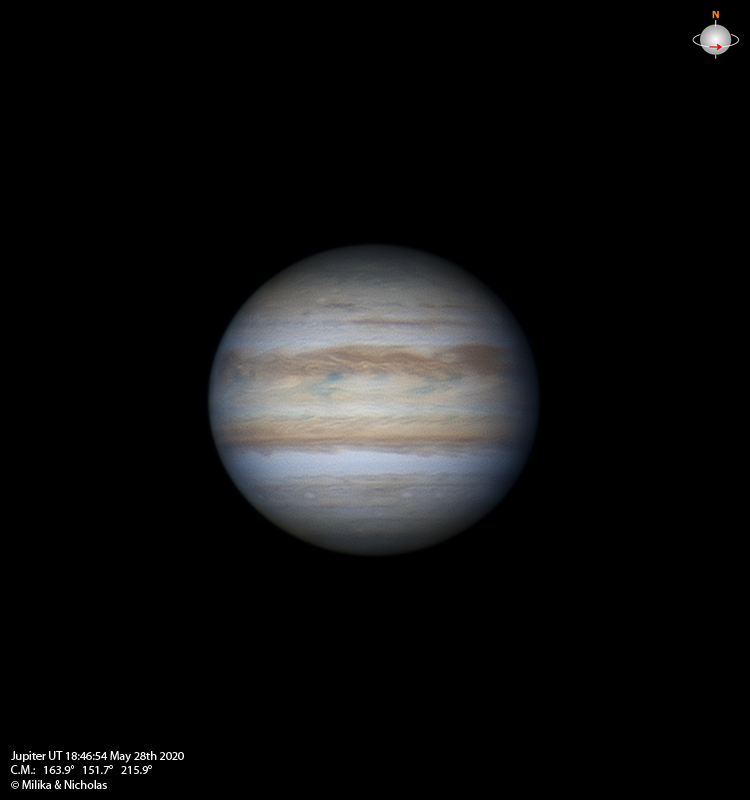 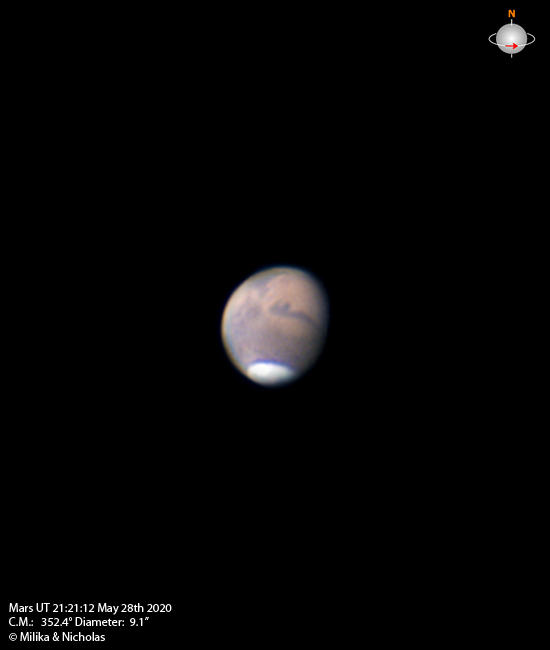 Wonderful images as always Darryl.  Right now Mars is finally getting up to around 40 degrees just before dawn, by the end of June it should be much better placed (and larger) for those of us up here in the north.

My goodness you are really suffering car issues, I hope these are cleared up soon and you are soon driving a more reliable monster 4wd into the COVID19-free wilderness.

But, since I am pinned to my house, for me it is great to see some more Darryl imaging from the South Australian burbs!   Your Mars has cut through very well with a nice detailed image that would be much prized down South if taken in the Mars opposition in 2027.  Jupiter looks a bit like there was a layer of frost over your OTA, a result hard to avoid in my damp freeze of Canberra at this time, but perhaps for you the ice was up in those annoying clouds. Of course Jupiter still looks a very good image.

Amazing that Melbourne in Vic seems one of the more seeing blessed Au locations at the moment. The weather bureau is talking about a wetter than normal winter for Southern AU, hope our we all still get some good spells of cloud-free seeing.

Nice images Darryl, especially under the circumstances. I'm looking forward to what you can do with Mars as it increases in size later in the year.

At the moment we are getting about 1 clear night per week in Melbourne. This morning was the one for this week, however every weather bureau was predicting heavy fog which never came, but the jetstream is still blowing strongly. At this early stage I'm getting Thursday night/Friday morning as a possibility, but that is still a long way off... However, Thursday night does promise a double moon crossing of Jupiter with shadows on the planet and the GRS just before midnight ...

Fingers crossed it was just a cold - plenty of those going around anyway at this time of year. Take some vitamin C and some good sleep, both help the immune system. Walks in the sun (exercise plus vitamin D) also keep the white blood cell humming.

Thank you for the kind comments & "Likes" posted everyone - appreciated!

Kevin, when we can see the sky between clouds

Mars is clearly showing its inexorable move northwards...from near overhead in March/April to where it is now & where it will be later in the year - bad for us but good for you & a lot of Northern imagers!

Ross, it wasn't that cold tbh (think it might've got down to 9°C but that was around Mars-capturing times) but the clouds & mists were a real p.i.t.a!

During the Jovian imaging it was stop-start continuously...watching an enormous lick of a wave-like cloud front in near real-time satellite view & hoping our little zone would pop out every so-often for a quick capture.

Definitely not what you want to image in!

Andrew, Wednesday night/Thursday morning & again on Thursday/Friday there could be a slight possibility but tbh I want to use the mono cam (particularly for Mars) & apart from the fact that marginal cloud-free opportunities are very iffy that far ahead, more prospects like the night of these isn't terribly exciting!

Darren, "que sera, sera" but the thought crosses my mind not too infrequently: I'm a proponent of vitamin C & believe it has been instrumental in warding off all sorts of chest complaints for many years now even though I now have flu shots...not much sun around atm so I guess some D is a good idea...I think we're suffering our own sort of corona-induced ennui exacerbated by a couple of other issues, the trip we tried to go on

would've lifted our spirits for sure!

Someone like Jeff with his experience & expertise would be good to hear from on the Martian "landscape" appearance atm: specifically some regions of lower albedo (ie, darker regions) appear to me as if they might have brightened quite noticeably, although at the same time it does look like other areas display more contrast (ie, even less albedo) than they usually have over the last few apparitions...

For instance, N-W of S. Meridiani along the W. edges of Arabia in the very S. regions of Acidalia abutting Niliacus (around the Indus/oxus region) it looks markedly different to me.....of course the poor resolution of this image might explain this to a certain degree but it does appear as if there have been changes (perhaps lingering from 2018) apropos albedo variations on the Martian surface...although Mars southern tilt has increased markedly since then.

Looking at various maps indicates large variations in the lower albedo areas so I suppose this is indicative of such variations over time...

very beautiful details and the colors are superb.
thanks, well done.
ps, i hope everything will be fine for you guys.

ps2, I am  working  on a photo of Jupiter too, but I am very far from the results that you have.

but I have fun.

I would say some fine results Darryl considering your seeing situation especially your Mars ! Look forward to some more when your seeing comes around.

your acceptable jove is ten times better than my best jove this year,,, no more imaging here the gods wont alow it

Man you really are having a rough time with that vehicle! Hope you get it all sorted soon so you can head out to find the best seeing. Nice detail despite the seeing. Mars is look especially good! Looking forward to seeing the results when the seeing improves

Thanks for the additional comments Frank, Joe & David...& the "Likes" people!

Yeah, the car situation is far from satisfactory...the guy is very capable but I wonder whether a Nissan dealer might have better, or rather more specific diagnostic equipment...but that idea is countered by the fact that I had the car serviced from new by a Nissan dealer who couldn't diagnose one very long-standing issue & were ignorant of another for the last 2 services they carried out...& their own auto-electrician was in charge of the workshop when they virtually stitched me up for a new differential (nearly $4k) which took a lot of hassling to get a sort of compensation for...