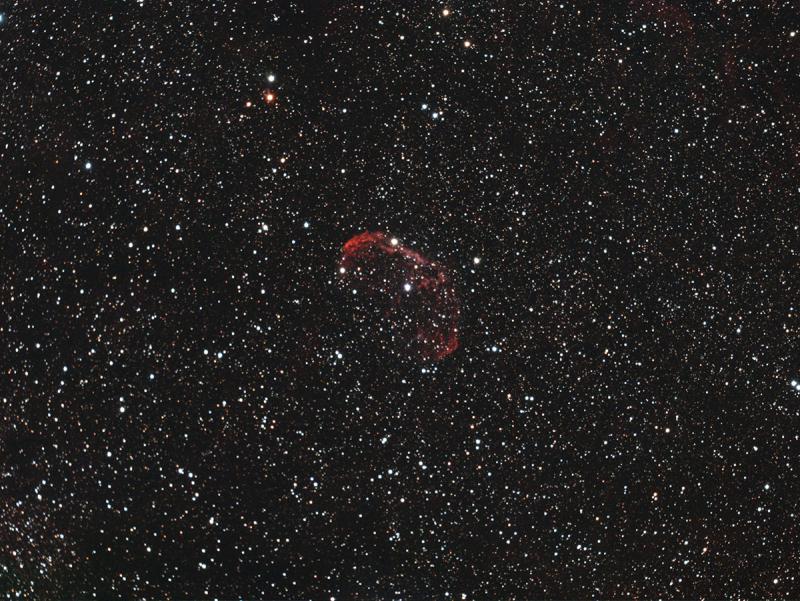 The Crescent Nebula is an emission nebula, usually a cloud of diffuse interstellar hydrogen set aglow by hot young stars born within it. However, in this case the nebula was made by a single, massive, fiercely energetic Wolf-Rayet star at its core. Some 250,000-400,000 years ago this star ejected its outer surface while it was a red giant, forming the expanding shell of the nebula. As the star collapsed it ejected a fast moving solar wind that is pushing against the slower moving gas in the shell forming a shock front giving the nebula its distinctive shape. The Crescent Nebula lies among the rich star fields in Cygnus and almost gets lost amongst the Milky Way. The five stars forming a “W” across the northern edge of the nebula makes a handy reference for locating this field visually or with a video system.

This was the last image from a recent all-nighter to make use of the last couple of hours between M20 reaching the meridian (my previous target) and the first blush of dawn. The last few images in this set that were taken right around 5am were quite beautiful with a soft veil of blue sunlight across the image. Of course these were not used in this stack, but I always get a kick out of seeing the last rays of the sun in the first subs of the night and the first blush of dawn in the last subs of the night. That shows that I made good use of the entire night!

beautiful photo, what I like is that you always leave an explanation.
appreciate, thank you.

I'm a little shocked how weak the SNR is using that fast OTA....

BTW, both my 5.5" and 8" Schmidt cameras have been converted to digital, but not DSLR. While they are blazing fast, I can actually get wider fields with my DSLR and Meade 6" f/3.6 Comet Tracker.

What a fun hobby!