My favorite dark site is finally open again.  The Milky Way extends direct vision out to Antares and the Pipe is also a direct eye object.  Great place to match up the Orions with the Vixens.

I did go for the thread adapters for the Orions, mostly for the polarizers, but I compared them to the VIxens with and without the filters.

First off, the adapters themselves take away about 3-5 degrees of the field of view on the Orions.  WIth filters in place as well, it takes some more, probably about another degree or two.  This is the part of the field where the Orions start showing lots of defects, so it's not really that bad.  It is a small price to pay for the filtered view.  The filters themselves off-band severely at these kinds of field angles.  I had a Lumicon UHC and an OIII filter on hand.  I tried the OIII on both my dominant eye side and the other.  Bottom line, OIII is not going to work well at these kinds of field angles.  The UHC did much better, but still showed vignetting far off axis.  At ten degrees off axis, this is to be expected.  Stick with UHCs with broad bands.  At a site like Wupatki, though, unfiltered is very much more pleasing.  Focusing with the filters on takes quite a while on Vega.  Save the filters for less pristine skies.

Unfiltered, the Vixens were clearly sharper.  I counted about 15 stars in M7 with the Vixens, but barely 3 or 4 with the Orions.  Remarkable difference here.  The pipe also showed better with the Vixens.  However, the larger flat field portion of the Orions brought out large scale nebulosity better, especially in Cygnus around the Veil.  The Veil itself showed up better in the Vixens, both becuase of the sharpness and the reduced surrounding nebulosity.  The Veil is an OIII filter and nothing else object at this site when shielding from the rest of the sky.

One can really look around without moving your head in the Orions.  This would have the most benefit for meteor showers, for example, just lying down and looking up.

If this were all, I would say stick with the VIxens unless you want to lie down.

During the day, polarizers are amazing on the Orions.  My jerry rigged filter holders for the Vixens are shaky and don't permit easy on the fly rotations with any precision or stability.  Being able to tune the polarizers precisely to the sky is very, very nice.  Clouds' extent and structure just pop out.  If you enjoy cloud watching, the Orions are definitely worth the money.  I eagerly await a rainbow.

For eyeglass wearers, the Orions are a much better choice.  The recess at the eyepiece is several millimeters smaller in the Orions than in the Vixens.  Wearing glasses does not rob very much field in the Orions over contacts.  The part that goes away is the outlying not so flat area anyway.  The field loss is much greater in the Vixens, but one is still left with not so flat field at the edges anyway.  The downside of the Orions is the eyelash grease that accumulates for non-eyeglass wearers.  I had to stop and clean the eyepieces with my contacts in.  I have never had that problem with the Vixens.

The only other issue I noticed with the Orions is the tripod mounting section.  When I tightend the adapter, the grub screw holding the two halves together, and setting the tension, loosened.  I had to reset that grub screw to get the IPD adjustment tension just right again.  I have never had that problem with the Vixens.  Be careful when tightening the tripod adapter on the Orions.

I also had the objective cover greasing up the glass issue that others have reported.  I washed the covers in warm soapy water and haven't had the problem again.  If you keep the filter adapters in place, it adds stiffness to the covers as well.

This is an example of how to do a comparison or review. So often I read a review and it's all opinion and I come away wondering just how much the author really knows, there was no real substance. Here, I feel like I have a good idea of the differences between these two binoculars, Butterfly knew what was important.

Thanks, that's good to know. I have the Vixen and enjoy it immensely. Not surprised to hear that the narrowband emission line filter can't handle the band-shift out in the field... those filters were never intended for that. Sounds like having and enjoying both would be worth the added cost. I think I'll but the Orion and keep the Vixen!

Thanks for the field test report!    Tom

Finally...... got some Orions to compare to my homebrew Nikon 2x54. It’s raining so detailed comparison will take a bit. They’re certainly sharper and brighter than the Nikon, but not *that* much wider. I tried to “pad out” a 55mm filter ring adapter but no go :-( filters shouldn’t reduce the field as much as the Nikons that use a 62mm thread. Good that I bought some CLS filters that should suffer less than UHC. The Nikons are more sloping and so don’t bash my nose quite as much as the Orion which step our below the eyepiece. I’ve just made up some winged eyecups out of bike inner tube to make the view more immersive.

These devices look interesting. To simulate the view (although one eye and upside-down) I attached my Canon 85mm 1.8 to a Panoptic 24 which makes a 3.5x47mm monocular. I tested it under the start, but I did not measure the gain in limiting magnitude, but it must be about +1 mag. The FOV is only 18 degrees, just enough to fit the Orion constellation. But objects barely visible to the naked eye become clearer. And, yet this is not a Galilean design, but just an ordinary 'telescope'. I don't think it makes difference. This design cannot violate laws of physics which limit the gain in limiting magnitude by exit pupil.

So I am considering the Vixen or the Orion. 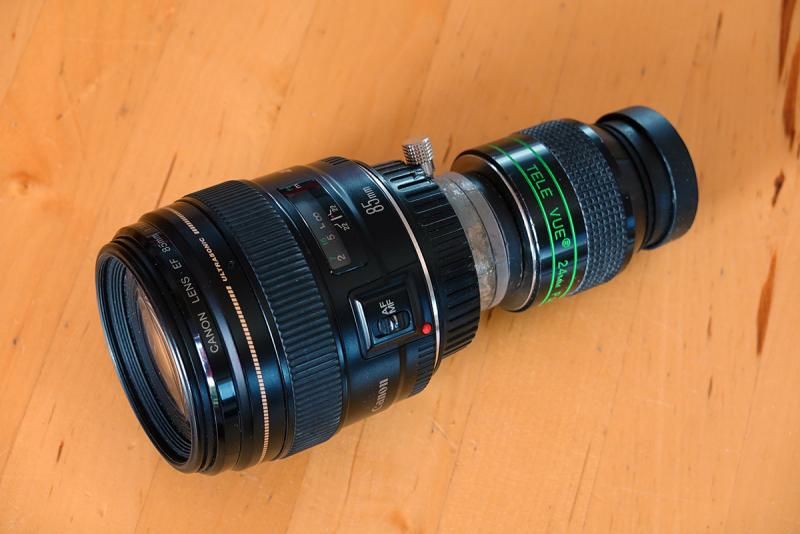 
Also tagged with one or more of these keywords: binoculars, observing report