So about 8 years since first considering an observatory I decided to go ahead and just build one! I chose the SkyShed 8x10' from their downloadable plans - I don't need a lot of space as this will be used for remote imaging. I'm fortunate enough to live in a dark sky site and have some land to work with, and the obsy will be connected to my home WiFi network.

I decided on a 9" concrete slab foundation and no pier. I have no passing traffic or other sources of vibration, and I won't be in the building when I'm imaging, so this simplified things a lot for me. 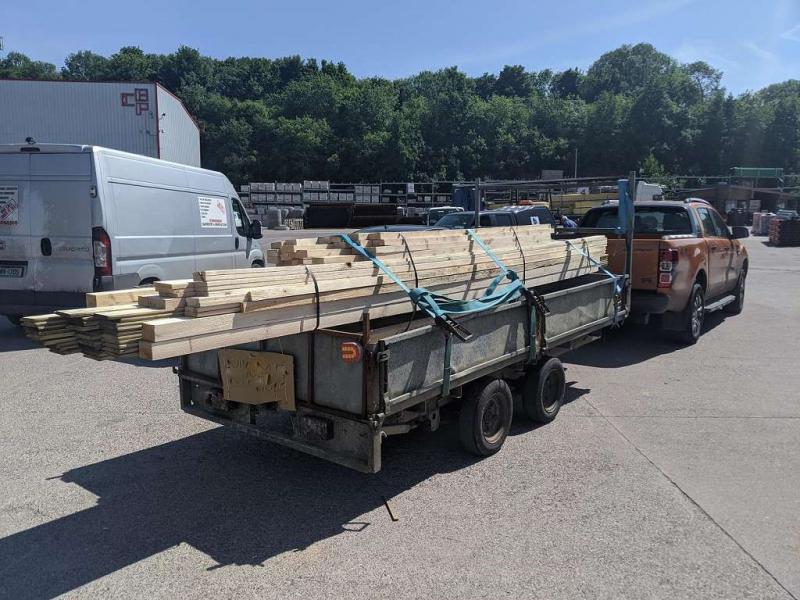 I borrowed a trailer from a neighbour and was surprised at the amount of wood required for a small building! I've never done construction like this before so made a rookie mistake and let the yard guys pick the timber for me. I had to return half of it and get replacements as it was severely warped. 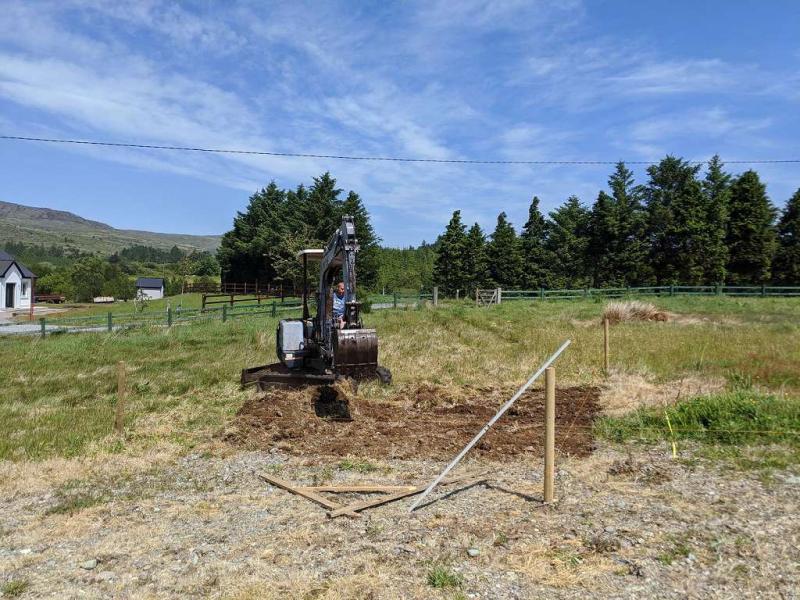 Another helpful neighbour with a mini-digger helped save a lot of work here. The ground is gravel and back-breaking to work manually. This is also partly why I decided against a pier - digging a narrow and deep foundation as per the guidelines from speedster in the "Pier Engineering" thread is impractical. The ground is hard to work and any hole you dig has a serious tendency to collapse on itself. I decided a poorly seated pier would be more hassle than it was worth.

It felt great to get started on this project. So much that stopped me from doing it before was just inertia. Once I decided to do it and took the step of buying the timber, the next steps came much more easily.

Let me know if you need me for any questions. 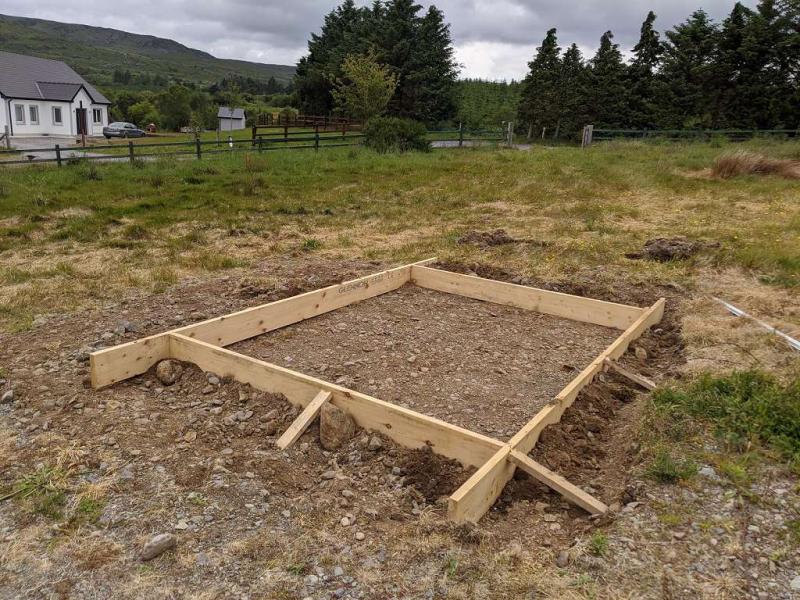 Form for the foundation. 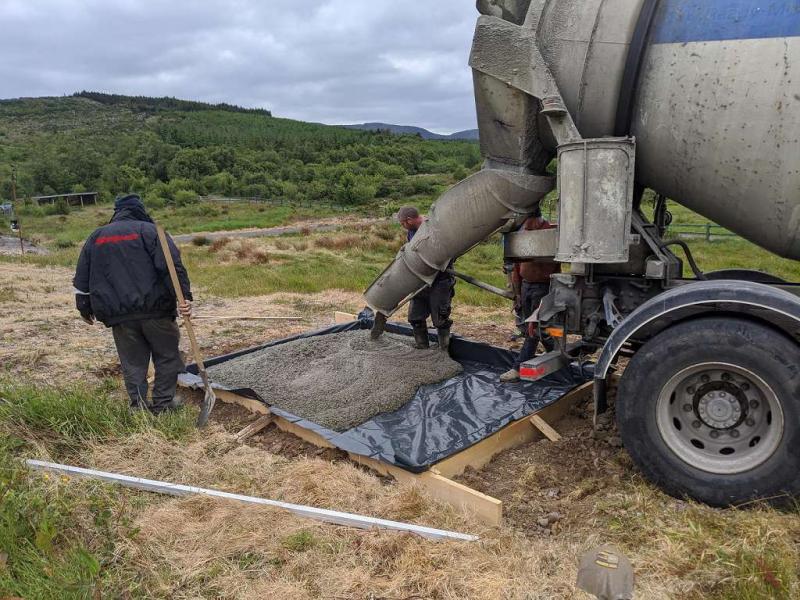 Plenty of help for the pour. I went with fibre concrete which doesn't require rebar. And for an 8x10', 9" thick slab cracking would be an unlikely problem anyway, especially given the hard packed gravel soil base. 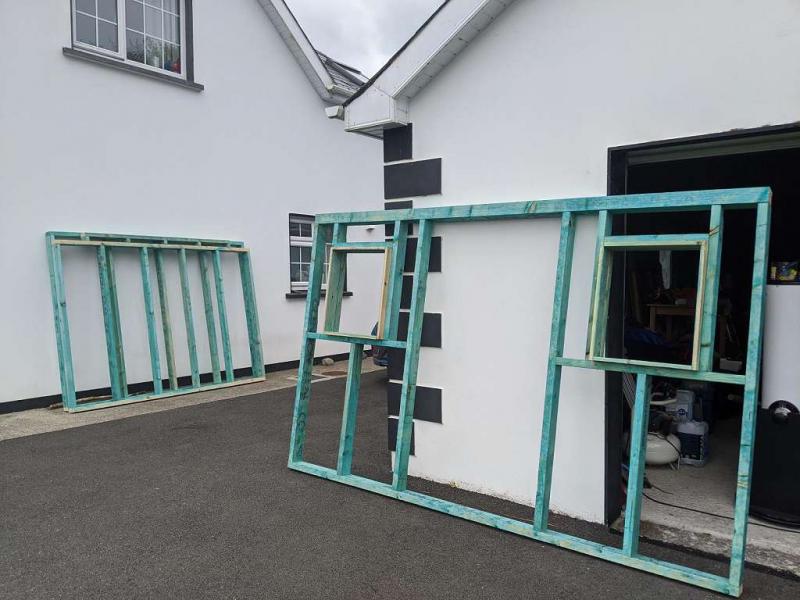 The SkyShed plans are Canadian, and a 2x4 there is not the same dimensions as a 2x4 here. I don't know of anywhere where a 2x4 is exactly 2" by 4"! Some of the timber sizes specified in the plans are not readily available in Ireland, so I've used 4x3s where 4x4s were called for, etc. I framed the walls down by the house and to make them easier to move, I waited to put on the siding until I had them erected on the slab.

As Ireland has only really been totally metric for about the last 20 years, we have a history of using Imperial units. Timber is specified in metric units, but colloquially referred to in Imperial. This is especially irritating when you're given the length of a piece - the length is often given in feet, which is not accurate. For example, an 8 foot length of 2x4 is actually 2.4 meters, which is 7.87 feet. So if your plans call for an 8 foot length and you attempt to use an "8 foot" piece of timber you'll find it's short a few inches. Of course this is a specific problem when using plans from one country and doing the build in another! 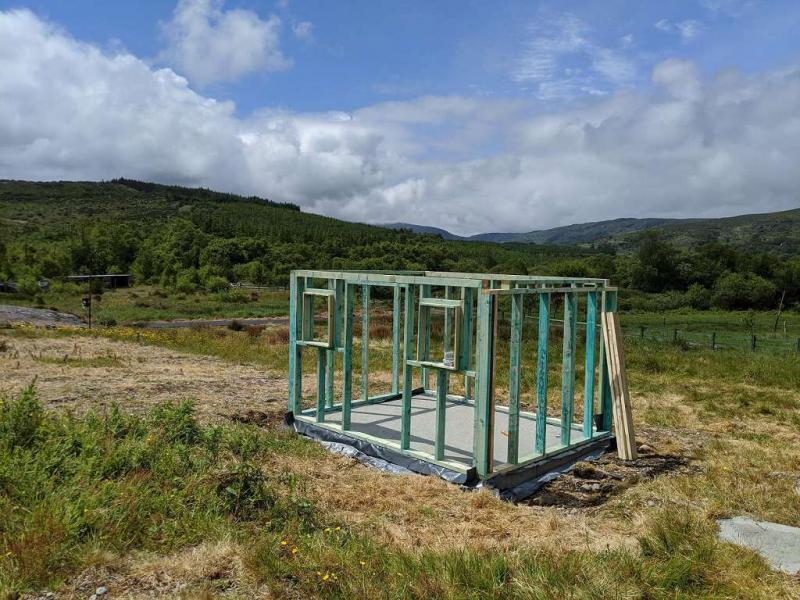 Felt great to get the wall frames standing and have something that starts to look like a building take shape. The SkyShed plans call for the building to sit on patio stones, but where I live we frequently see 90+kph (55+mph) winds in winter. They howl down the shallow valley in the background and can gust higher. The frame is bolted solidly onto the concrete slab. 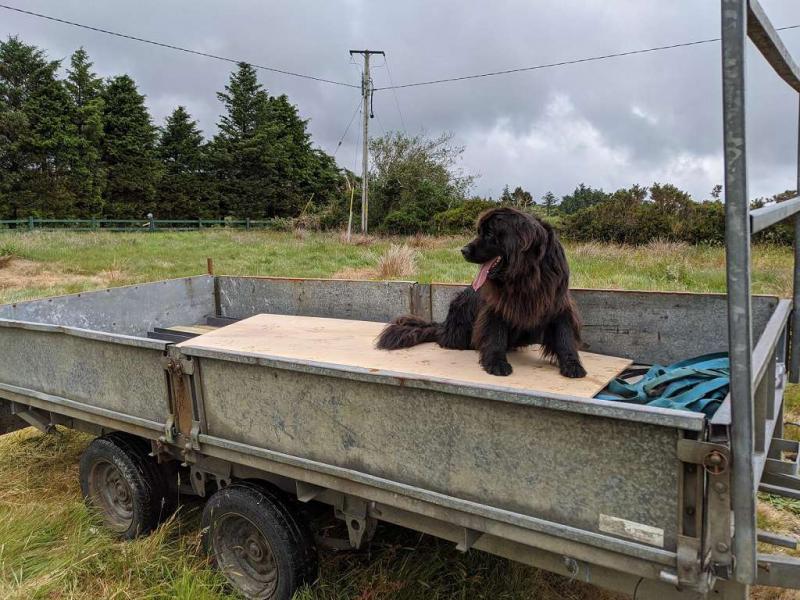 It helps to have help! 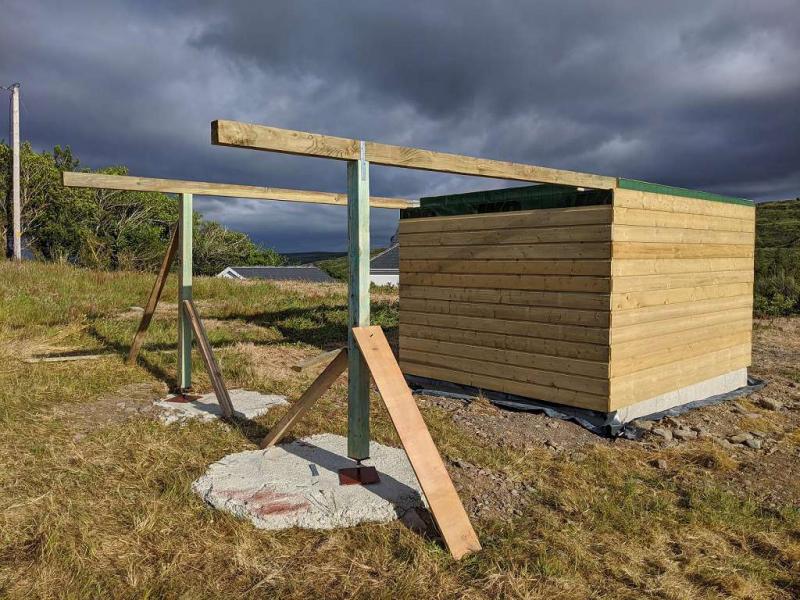 I was a little casual about the placement of the foundations for the roll-off gantry supports. A rough measurement and my neighbour took a couple of scoops out of the ground for the concrete. The slab took 1.7 cubic metres of concrete, so I ordered 2. The price would have been the same for 3, probably as at that point I was mainly paying for the truck to come out with a small load. We dumped all the excess into the post holes creating a pair of fairly unsightly puddles of concrete. Despite that, you can see that the support on the far side is right at the edge of its foundation!

I drilled anchor holes in the jack plates and will bolt those down as well as extra precaution against wind.

The siding is mostly done here. I got about 2/3 of a roll of felt from a neighbour, so there was more than enough to wrap the whole obsy as well as the roof. 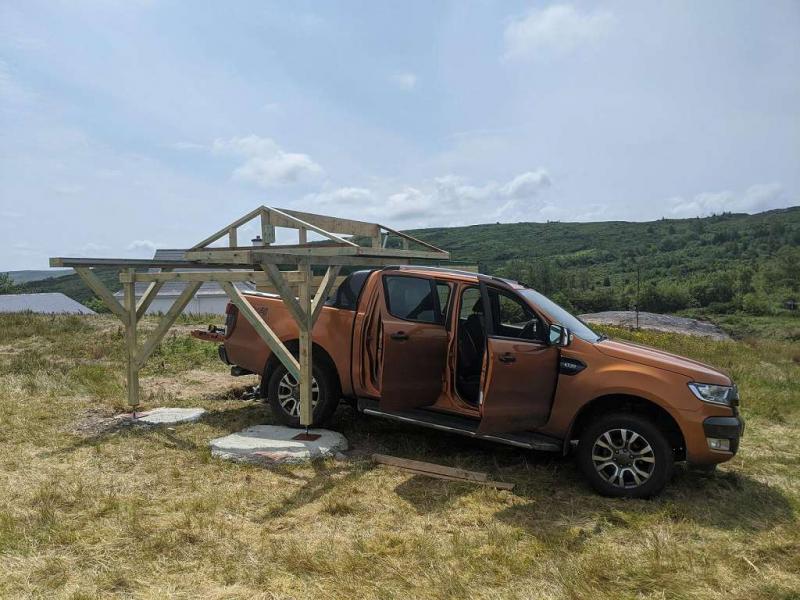 Adding the gables. I think I made the carport a bit too small though.

One thing that makes building a roll-off-roof observatory interesting is that when it comes time to make the roof you can position it how you like it. I didn't take many images at this stage, but I had a stepladder in the building and then I backed my truck under the roll-off gantry and used the bed as a scaffold. It worked really well and made assembling the roof a breeze, even doing it solo. 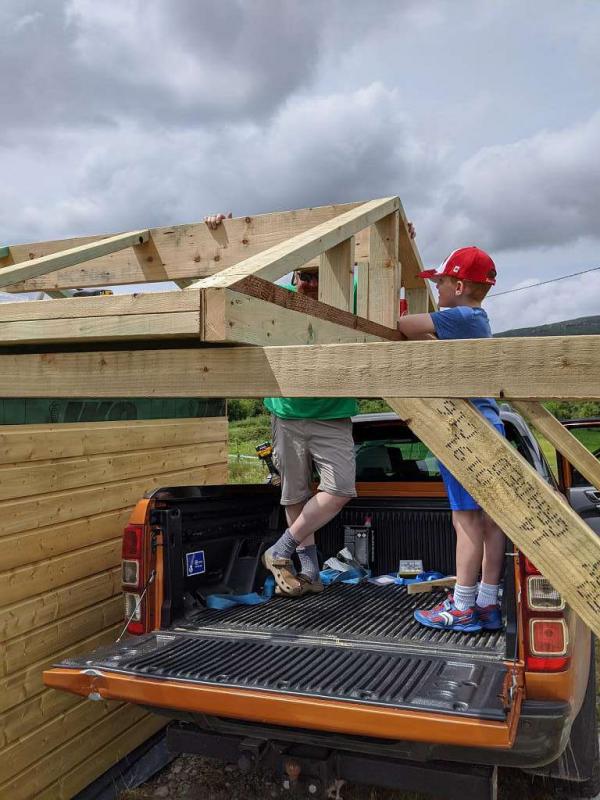 Taking a break from building with my helper.

The eagle-eyed may notice my purlins are sideways. In my inexperience I cut and installed them wrong. I caught it when I went to install the rafters, so ripped them out and cut new ones. Thankfully I had a few spare 2x4s that I could use. The SkyShed plans come with a materials list in spreadsheet form. This was very useful in making the shopping list. Plugging the lengths of all the different cuts into a linear cut calculator allowed me to order just enough timber to do the job. 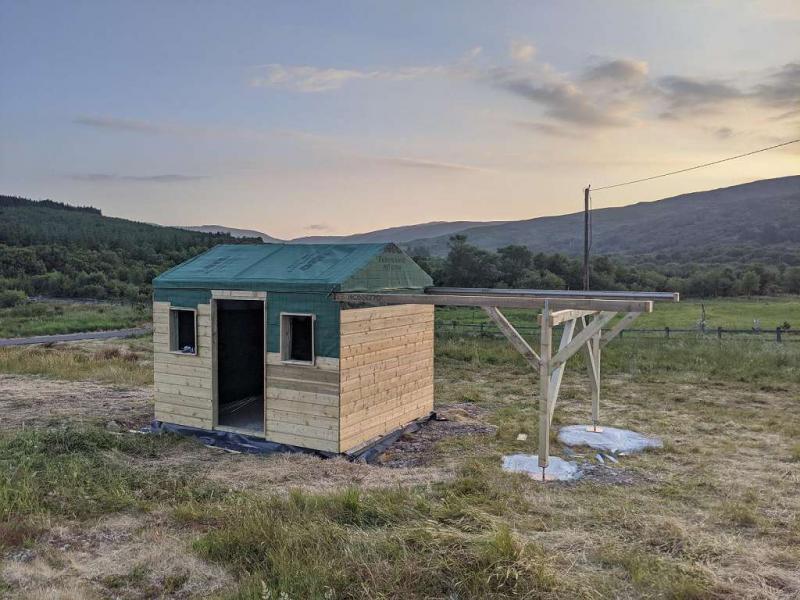 So this is where I am at the moment. The roof is complete except for siding the gables and installing the sheet metal, etc. I need to make the door and complete the door frame, install windows and corner flashing, and flashing above the windows and door (which is why I haven't finished the front wall siding yet). The last task will be to dig a trench to bring power to it from the house and install the electrical sockets and lights.

I'll post more images when I make some more progress. I'll also add some details of the roll-off mechanism.

The project has taken longer than I expected - the timber was bought on May 28th, so it's nearly a month now since I made a formal start. There was a week of waiting for the slab to cure and then some losses due to weather but there's a lot more work in this sort of thing than I expected! I've enjoyed it very much, and added another skill to my list.

Let me know if you need me for any questions.

Very cool that your son is involved. Looking forward to first light. 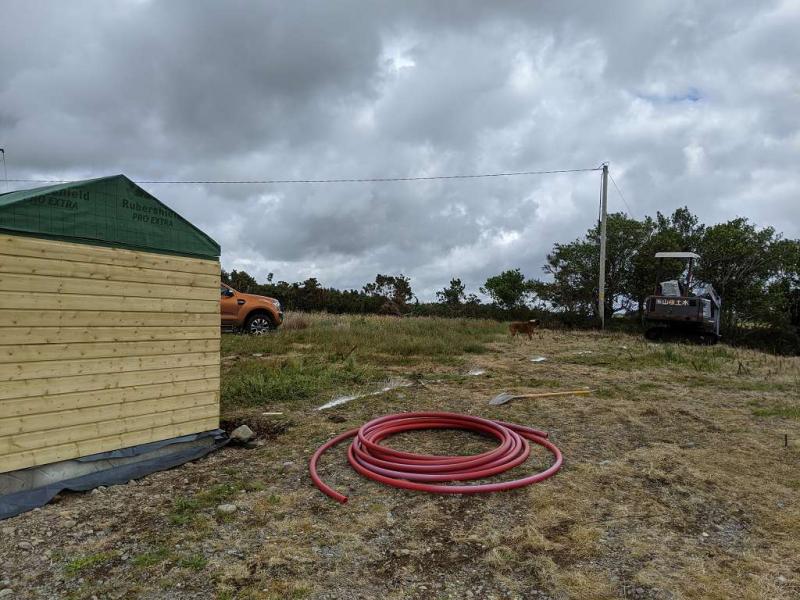 Coil of conduit which was left over from a neighbour's job - will it be long enough? 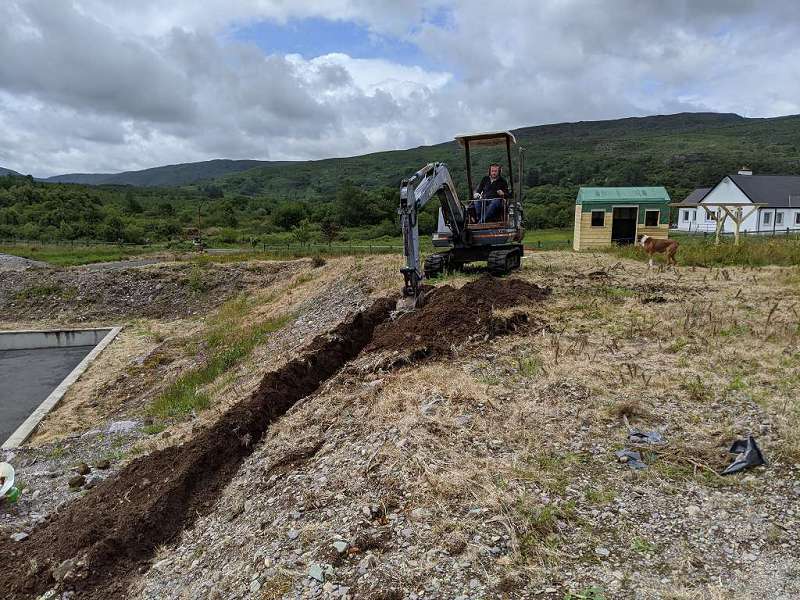 Digging the trench. We started before the rain came, but the last 15 minutes or so of closing over the trench it **** down. Kudos to my neighbour for sticking with it, he's been a huge help throughout. 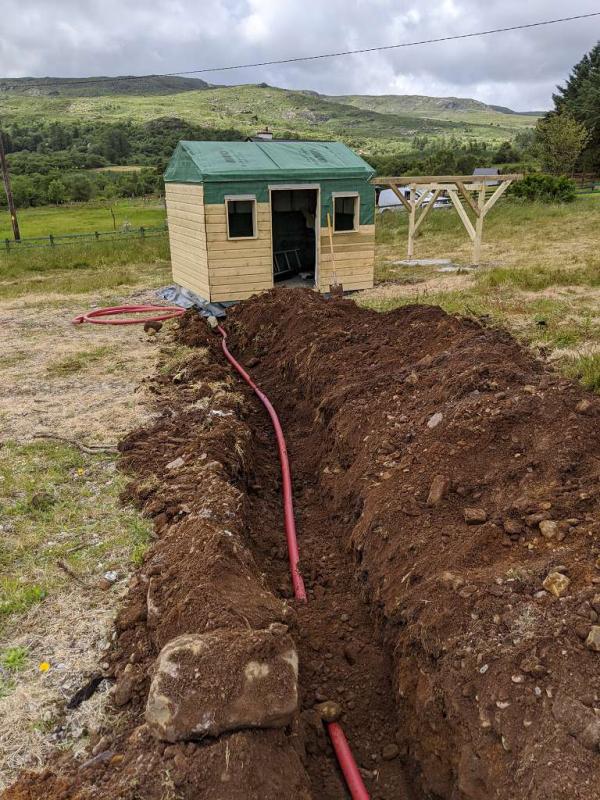 Enough conduit and to spare!

The trench is now filled and levelled, so the next job is to get the wiring through the conduit and hooked up. Looks like it'll be Wednesday before I can collect the roofing panels and get started on that.

It's been a busy couple of weeks since I last posted but, asides from some cosmetic work and cleanup, the observatory is complete! Just in time for a long period of cloudy weather, of course.

I had about a week's delay in getting the metal sheeting for the roof. I picked it up just before an unseasonably big storm was to hit us, so was keen to get it on before that. The roofing felt had been on in fairly high winds for about two weeks at that point and I was surprised it hadn't been torn to shreds. I was nervous about putting the sheeting on, but ended up tackling it solo in order to get it done before the weather. As it happens, it went very smoothly and even though it was breezier than I'd have liked, I didn't feel like any were going to take flight on me while I was installing them. It felt great to have a finished roof and a weathertight building! Using the bed of my truck as a scaffold made things easy and felt a lot safer than using a ladder, especially on the uneven ground around the building. 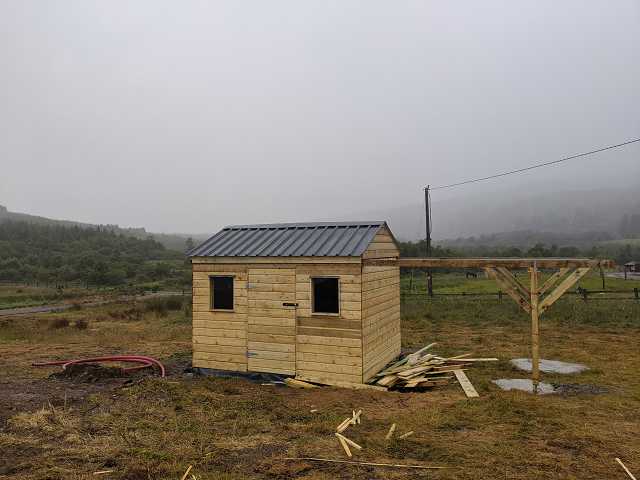 Just finished putting the sheeting on the roof! The day after this we had 75kph winds and nothing budged. A good stress test!

After installing the weather stripping around the gap between the roof and the walls, it was finally time to install the mount and telescope. I carried the telescope assembly up by hand, but the mount was a step too far, so I loaded it in the truck and rednecked it up to the observatory. 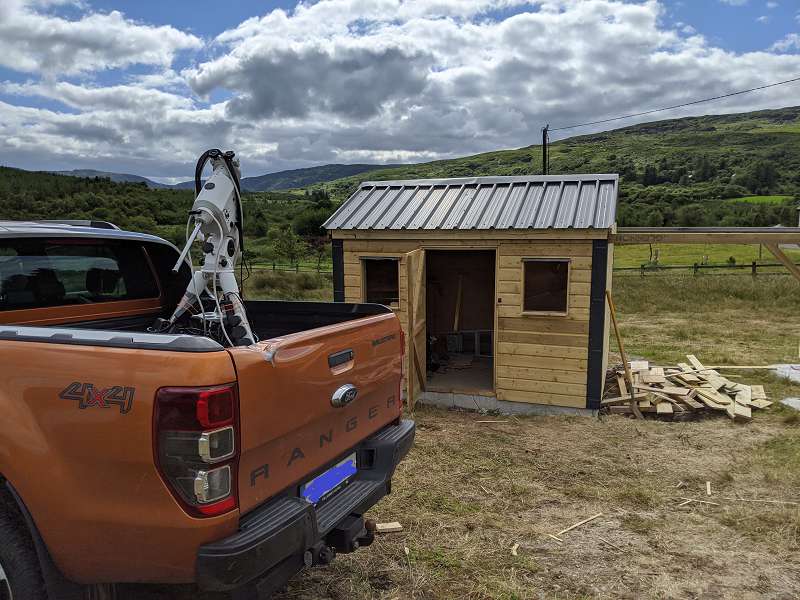 It felt great to have the telescope installed, even if I had no power to the building yet. I'm using an NEQ6 mount with a Quattro-S 8" OTA. PrimaLuceLab Eagle3 as the controlling computer and an ST-80 with ASI120MM-S as the guidescope. Imaging camera is an ASI1600MM-Pro with ZWO filterwheel and autofocuser. 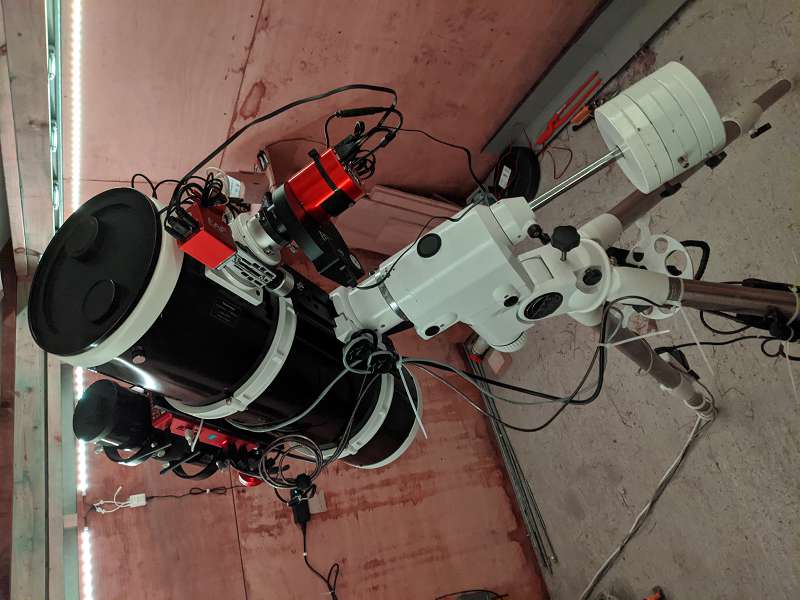 Here's a view of the track and rollers for the roof. These were the second most expensive item in the build after the timber itself. It works well and rolls very easily. I'm using four turnbuckles in the corners to keep the roof closed and for additional protection against wind lift. 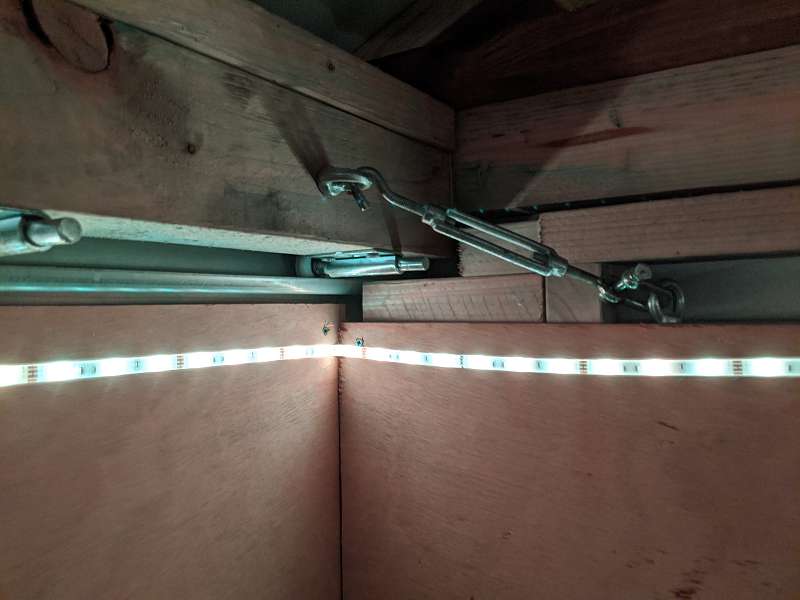 Track, turnbuckles and fancy LED strip lighting. I like this because I get nice white light for maintenance and it can be set to a low red if I need it while imaging.

The next step was the install the all sky camera. I bought a kit from All Sky Optics which included weatherproof box, dome, camera holder etc. I'm using an ASI120MM-S as the camera and it's working well. I had planned to build a pole for it out of scrap wood, but my neighbour stopped by as I was about to start and offered to make one out of scrap metal instead. 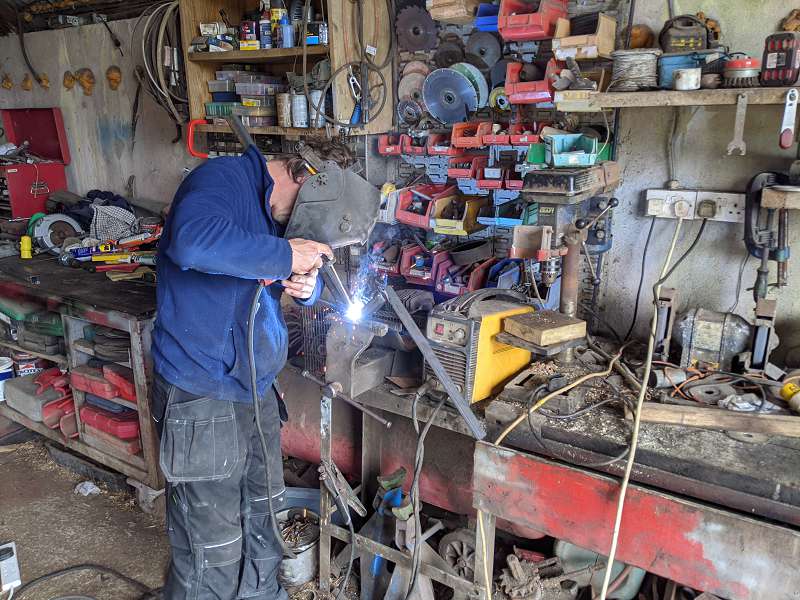 Welding the mount for the all sky camera.

On the pole, the camera has a view over the roof whether it's open or closed. 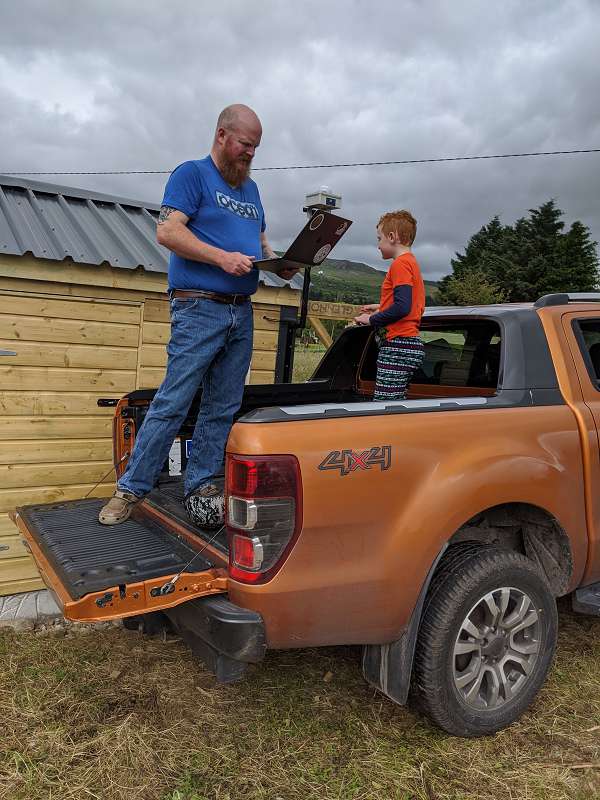 Orienting the all sky camera. At some point I'll add automation to the observatory so the cloudwatcher can be attached here as well.

Sadly since installing the telescope and gettting power to the observatory I've only had one clear night, with no prospect of more for the rest of the week. That was spent configuring the telescope and dealing with a maddeningly frustrating problem where the Eagle3 wouldn't recognize the mount - turns out the driver for the EQDIR adapter I have was deliberately disabled by the manufacturer and I had to go find an older one. I polar aligned the mount then woke up my son to look at comet NEOWISE and the planets. All going well, I hope to have a proper first light with the observatory this weekend. 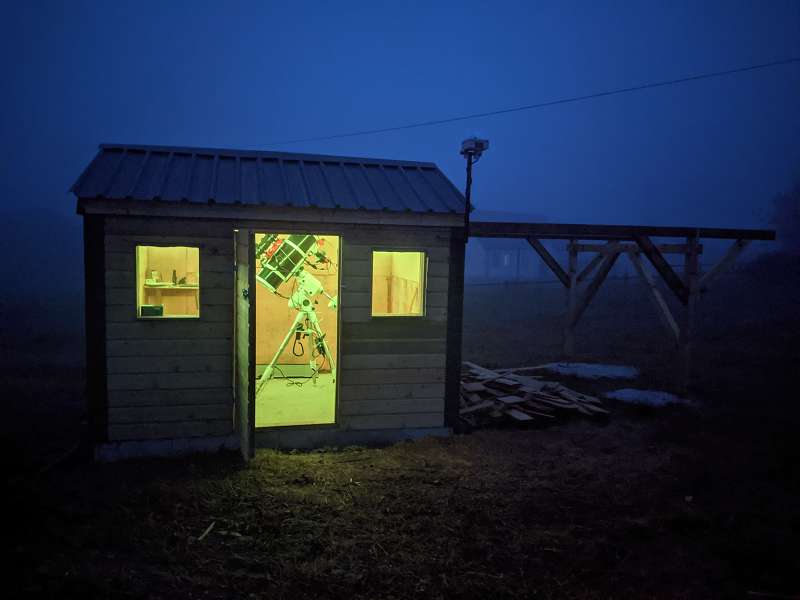 That's all for now!


Also tagged with one or more of these keywords: observatory