Assembling a Manageable Pier Riser for the AZMP Tripod

To separate the leg-spreader function from the mount-body-attachment function, my AZMP tripod was previously modified. The original spreader was replaced by a TPI spreader (the one made for the AVX fits this perfectly). Once the original tripod bolt no longer tightened a spreader, its lower end was cut off. It measured 215mm long as modified. That, or a similar modification, must precede this solution. While not necessary, the TPI Leg Levelers were also added. They make precise preliminary leveling of the tripod deck simple and quick.

The iOptron Mini Pier 8032 is intended to do this job but its closed sides mean the attachment of the mount body is accomplished by turning a through-bolted bolt within the cramped space between the mount body and the pier deck. This may be simple, effective, and cheap, but it is unacceptably laborious. If it could be performed only one time, as in attaching the Mini Pier to the tripod deck, that would be fine, but it needs to be performed with every setup, and undone and redone to re-level when the tripod gets kicked. The mount itself is ready to go so quickly that this cumbersome process just feels wrong. Since the AZMP has become the preferred mount for both of my scopes (visual & EAA only) and my situation requires a new setup for every use, something better is needed.

It makes sense that a better pier would have open sides to allow access for operation of a normal mount bolt that has a handle. As a woodworker, not a metalworker able to build from scratch, easily adaptable components had to be located. The AZMP Pier Top Plate has the threaded holes needed for the leveling screws and would be used on top of whatever open pier could be found. The iOptron 8035-8 was chosen over the Losmandy AZ8RISER because of its smaller width and larger height. The large protrusion on the lower platform of the 8035 was nowhere in evidence at the time of its selection.

To clarify my terminology, the shortened original tripod bolt will now serve as only a “mount bolt” to secure the AZMP mount “body” to the custom pier riser. A new, separate “tripod bolt” will secure the pier to the tripod “deck.”

Note: If the original tripod spreader is to be retained, then different arrangements for the mount and tripod screws must be determined. The original tripod bolt could use an M12 washer and nut for the top of the lower platform and a new M12 bolt with a handle would need to be installed as the mount bolt. A second tripod bolt might be obtained from iOptron as a part, though it is not listed online.

The lower platform measures 42 mm thick, but 8 mm will be machined off the bottom,

leaving 34 mm.
Full engagement of screw in the central hole of the tripod deck is nearly 60 mm.
Though it can be longer, a new tripod bolt needs to be about 90 mm long, and a washer

the plate. (total 97)
The threading on the body is only 15 mm deep. The bolt can be much longer, but more

The working length of the custom pier mount bolt needs to be at least 112 mm.

The working length of the original tripod bolt, now being utilized as the mount bolt, measures 122 mm from the nut. This is as purchased and unmodified. It seems to be 10 mm longer than needed in even an extreme case. The threaded portion is 30 mm, so it has twice the desired engagement.

The space into which the mount bolt must fit, measured from the top of the chosen tripod bolt to the top of the plate, is 170 mm. Any length beyond that will protrude above the plate. Cut off the bottom portion of the existing bolt. Trimming removes the setscrew socket, so grind a simpler flat at 30 mm from the new end to reattach the handle on the shortened bolt. If you prefer, find a new M12-170 mm bolt with a handle.

In day-to-day operation, the levelers are pre-set 2-3 turns/4-7 mm extended, so their tops are 38-41 mm above the plate. The body sits 4 mm lower on them, so the top of its 15 mm threaded portion is at most 52 mm above the plate. One turn results in about 3 mm of elevation change, and in my use, they never get twisted a full turn to fine tune the level. Taking up too much with the levelers causes binding against the mount bolt anyway, and that should be avoided. My decision was to drop a 15 mm long, unthreaded spacer sleeve onto the mount bolt above the nut, routinely saving me nearly 9 full rotations on every setup. The possibility of needing that extra turn and having to give up 3 mm (20%) of thread engagement in the body seems remote to me. The spacer remains removable, so this is not a permanent modification.
(McMaster-Carr 92871A372 spacer $6.82)

In addition to trimming and flatting the mount bolt as described above, the following actions need to be taken:

enough to pass the 12 mm mount and tripod bolts.

best be removed with a milling machine. Lacking one, a slightly oversized 1 inch drill bit

in a drill press can do a decent job.

- Since the mount bolt is retained by the pier itself, the central hole of the plate was enlarged

to accommodate greater adjustment by the levelers without binding.

the pier assembly. Normal bolt heads can protrude above the plate because the leveling

screws raise the mount body by at least 20 mm. The proximity of the three holes to the

stiffeners on both pieces can be an issue. If you try it without CAD, good luck.

- Extending the top of the tripod by 8.75 inches means the tripod legs can be fully retracted

and the center of the saddle is about 50 inches high.

- New stops will be added to the azimuth balancing appliance.

This shows my TV85 mounted on the AZMP, balanced in alt, the drawtube fully extended with a flip mirror and Lodestar camera. Plenty of clearance now. 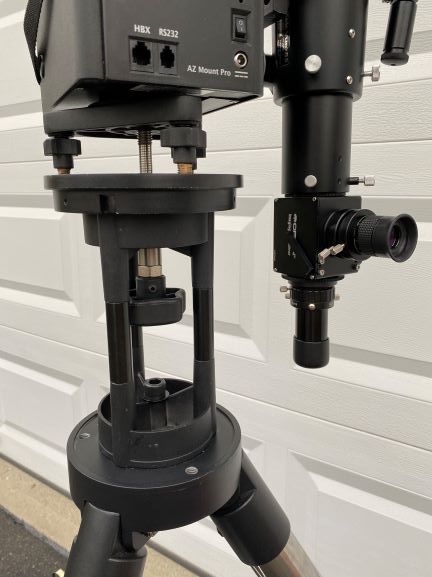 I have recently acquired an iOptron AZMP and love many aspect of it, especially the dual-instrument mounting for Star Parties.  I easily can show the public the difference between an f/5 and an f/12 FOV at the same mag., or show the difference in mag. with the same eyepiece at the different f/ratios.

But... I do have the exact same complaint you did about the center locking bolt.  "Once-and-done", I'd put up with it.  But having to fiddle with such a kludgey solution every time I adjust the level?  Fuggedaboutit!

So I'm considering having openings milled into the mini-pier extension (which I wanted for other reasons) at a local machine shop.  While I'm concerned that doing this might compromise the rigidity of the entire set-up, I'm thinking maybe some reinforcing material applied along the inside of the remaining extension walls might solve that.  If so, I would then replace the OEM lock bolt with a knob-handled one as you did.

Keep up the good work, and I'll post the result if I end up doing anything!

Sheldon, mine IS the OEM lock bolt, just shortened to 170mm.

Sheldon, mine IS the OEM lock bolt, just shortened to 170mm.

@Gene;  Oh.  I have the tri-pier, so the locking bolt that came with is very different, and much shorter.  No knob handle, just a (flimsy!) threaded screw with a nut to hold it still in the hole drilled at right angles *through* the locking bolt.  It tightens into the bottom of the mount head itself by pushing one's finger against the threads of that screw to get the leverage to turn it.  I had to put a plastic thread protector on mine just to cut down on the "ouch" when doing this.  It's held on the bottom side of the top plate by another nut.


Also tagged with one or more of these keywords: equipment, mount, tripod