It has been almost six months since I was able to get to the summit of Haleakala to observe. Bad weather conditions up to the middle of March and then, because of the pandemic, the closing of Haleakala National Park and Science City where our Haleakala Amateur Astronomers Site is located prohibited observing.
Finally, the Park was opened to visitors and even though the gates are closed at 5pm each evening, if you are not visiting the Park itself, you are good to stay the night.  And that’s exactly what I did on my first night of observing over a dark moon night, 06/22-23/2020.
It’s always a roll of the dice with the weather when you are observing. No matter where you are, you can watch the WX predictions up to the last minute at sunset and never know how the night will progress.
My most reliable reference is meteoblue.com which I can set for Haleakala Summit giving me the predicted cloud covering, wind speed and seeing conditions at 10,000 ft. elevation for the following 72 hours. Everything was looking good for great seeing and transparency.
With a C925 I use a CGEM mount with a SkyFi unit tethered to SkySafari Pro on my iPad. After I align the mount to Polaris with a polar alignment scope built into the mount, I usually do a two star and a four calibration star alignment. I center the last alignment star in SkySafari and connect the mount with the SkyFi. After a few tries, because the mount had been sitting in the pod for so long, I got through the alignment process. I was off and running! By that time is was after 9:00 pm and not knowing how the WX was going to develop, I needed to “cut to the chase.” There were a few objects I needed to get before they set in the west. All can be found in the AstroLeague Multiple Star Observing Program here.
With the C925, I usually use my Explore Scientific 18mm at 130X, 0.6° FOV to do my searches. I often sync to a pretty bright field star nearest to the object in question. Then I slew the scope to the object and Boom! All the images below are linked to my Gallery.

There is a seven star system that I really wanted to get, most of which are fairly bright components with challenging dim companions at tight separations. This isn’t usually the best choice for a first object to observe. However, during alignment, I noticed that the seeing was extremely good!
Struve 1830 and 1831 in Ursa Major are a beautiful double double sharing a common “C” companion with a “D” and “G” thrown in for kicks and giggles. The latest post by Uwe Pilz found here has some good images of this system. Stelle Doppie has the Lit. here saying the AC pair are physical and increasing. I had to try it out under these conditions! Sure enough, I was not disappointed although I ended up having to guess the position of the 13th Mag. “D” component in the end. This system is what makes observing multiple stars really gratifying! Only the “D” and “G” components are dimmer than 10th magnitude and the Seps are all greater than 5”. I was so intent on getting this system, I found no field stars to include in the sketch. There are three TYC stars 10th an 11th mag to the North of the system that you may catch if you have a wide enough FOV. The ”D” component SE of the “C” is a real challenge. To get the High Power Ocular, I used my trusted Televue Delos 6mm at 392X, 0.18 °FOV to eke out the “B” an “F” components. The “D” component remained elusive, and I admit I guesstimated it in the sketch below: 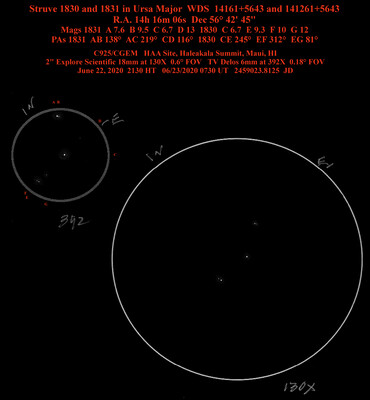 I noticed that the Jet Stream was increasing as I slewed to the next system, Struve 1769 in Canes Venatici. Stelle Doppie has the Lit. here. I didn’t want to spend a lot of time on the sketch which I later regret. I rendered my sketch with only my Explore Scientific 9mm at 261X, 0.8° FOV. I was able to identify one field star, TYC 0178, Mag. 10.8 directly east of the system. This is a tough triple and the Lit. shows the “B” component at 45° at 1.6” and the “C” at 259° at 56”. I was able to get the “C” component only on this one. The star further out to the ESE is a field star. The “CE” pair are tough because the “E” component is Mag 16! The “D” is 13th Mag. and the “F” is 14th Mag. I’ll have to get back to this one soon and see if I can get a better sketch splitting that tight “B” component. Has anyone had greater success with this one? 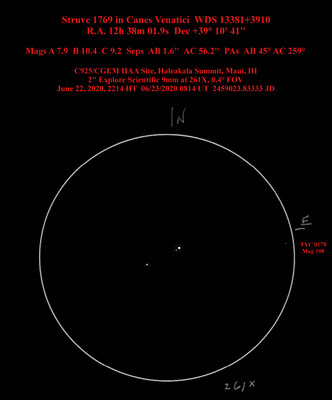 The wind was increasing to about 20mph and I headed on to 58 Crv, Struve 1669 in Corvus which can be found in Stelle Doppie here. All three stars are considered physical. You can track some of the comments on Ed’;s post here. This system was rapidly setting in the west and I wanted to get it before it dropped beneath the horizon. This is a tasty triple with an elusive 10th Magnitude “C” component. I used my Explore Scientific 9mm and my Televue 6mm to get the two ocular views. I plotted two field stars and only identified the one to the SW as GAIA 2048, Mag. 11.7, not labeled on the sketch. John Nanson’s sketch on his “Star Splitters” WordPress blog here, shows more field stars. 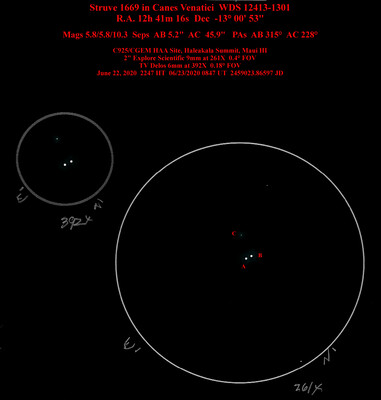 The wind was subsiding and the seeing was still great, so I proceeded to Struve 2011 in Corona Borealis which can be found in Stelle Doppie here. There are some good discussions of this system on Audrey’s post here. Although I only sketched this system with one ocular view, using an Explore Scientific 18mm EP at 130X, 0.6° FOV, I spent quite a while identifying the field stars which were quite prevalent. This system is a solid triple with a tight 2.7” Sep. AB pair an easy 9th Mag. “C” companion at 118” Sep. Although the wind was subsiding, there was an airy disc developing around the components. 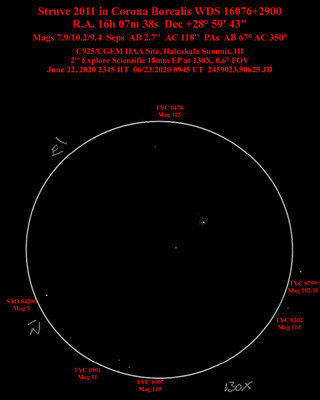 With the wind holding at 19mph, I slewed to Delta Cyg, Struve 2579 in Cygnus which can be found in Stelle Doppie here. This system has an orbital AB pair which is increasing. Again I observed with the Explore Scientific 9mm at 261X, 0.4° FOV. With the wind back up to 21mph, it was after midnight and I knew my observing time would probably be cut short. The “C” component is Mag. 11 and I knew I might have a tough time with the seeing deteriorating. Sure enough I got it at 119” Sep, 191° P.A. I also had a good time identifying the four field stars using SkySafari. 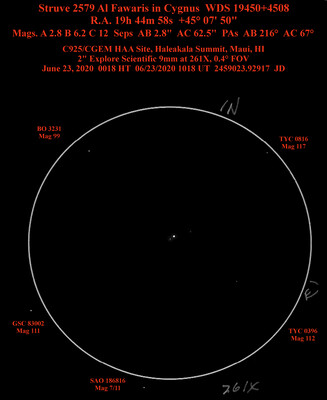 Lastly, after midnight with the wind steady at 21mph, I slewed to Struve 2083 in Hercules for my last observation of the night. The Lit. can be found in Stelle Doppie here with the AB pair considered physical. After centering the system with an Explore Scientific 18mm EP I powered up to 261X with an Explore Scientific 9mm, 0.4° FOV. I was able to identify four field stars. With a Televue Delos 6mm at 392X, 0.18° I got a good view of the three stars in the system. 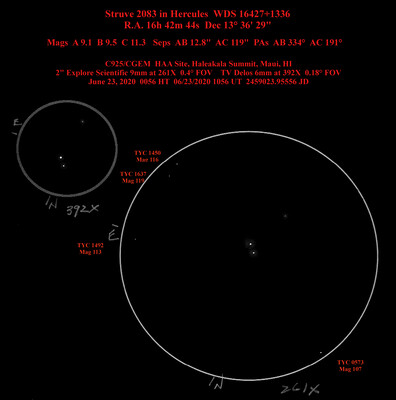 As ever we all hugely admire each of these sketches which you have delivered to us.

Your latest report is also a wonderful read.

Having spent a highly profitable time in Canes Venatici about 3 months ago, I am terribly sorry to say I never got to STF 1769.

It is a shame that this excellent double is not included in Sissy Haas or Robert Burnham.

I'm sure I would have studied it at that stage.

Only Stelle Doppie has it.

So it is only now that I can check it out some time.

I am very pleased to see you have included STF 2011 in Corona Borealis.

We have not had any clear nights since I observed it.

And I do have 4 or 5 more doubles to observe in this marvellous constellation.

But we have had 100% cloudy nights since that delightful Wednesday night.

And I don't know when we are due to have a clear night any time soon!

Excellent sketches and a fine report! Thanks for sharing your observations. I especially admire your sketch of Delta Cyg. I took a nice look at this one last night, myself. Needless to say, your C9.25 puts considerably more black space between them than my 150mm! Nice work.

How the heck do you observe with 20 mph winds? That CGEM must be sturdy, indeed!

How the heck do you observe with 20 mph winds? That CGEM must be sturdy, indeed!

Nick, Our Site at the summit is in a protected area and the WX Station for the Institute for Astronomy is up behind our spot on a hill. So, I read the wind speed on a WX page from a website. Nonetheless, the gusts come through and the scope shakes. The scope is mounted on a stable pier and shaking is reduced substantially. The pier is filled with steel plugs from the metal works. I'm not doing electronic imaging so there is some leeway. If the scope wobbles I slew back and forth very slowly and that stabilizes it a bit.

Here's a pic of my setup. 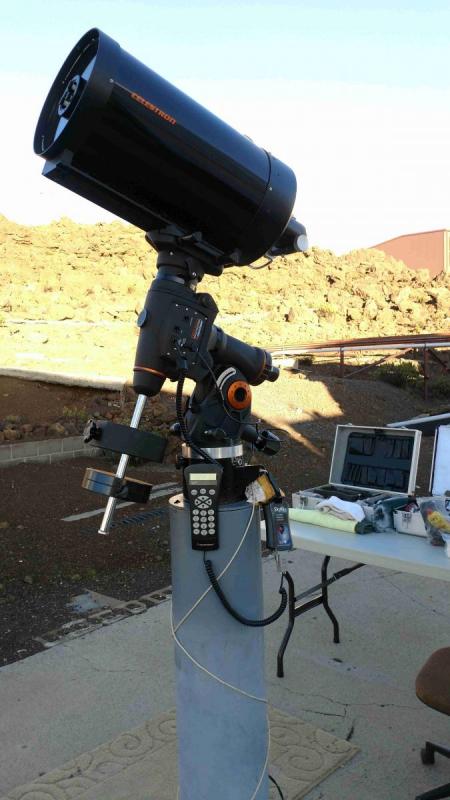 I am very pleased to see you have included STF 2011 in Corona Borealis.

We have not had any clear nights since I observed it.

And I do have 4 or 5 more doubles to observe in this marvellous constellation.

But we have had 100% cloudy nights since that delightful Wednesday night.

And I don't know when we are due to have a clear night any time soon!

Chris T. has a good image of it although I'm waiting for a chance to sketch it myself. I'm guesstimating the B component in his image... 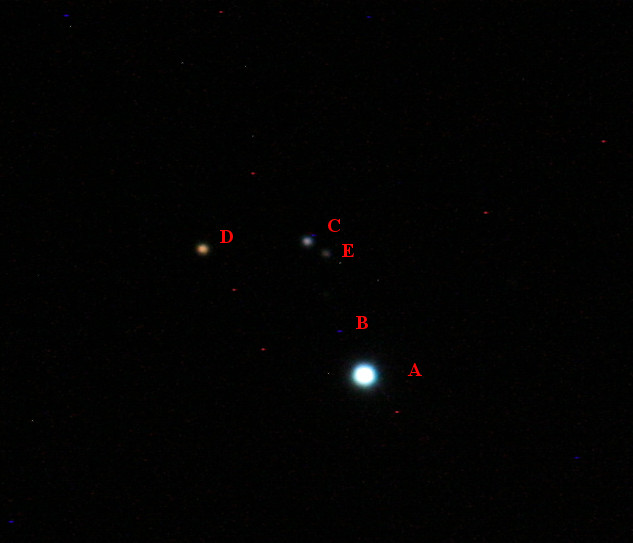 I'm sorry to say there was too much cloud in my skies tonight (Sunday).

But I hope to try again on Monday night and I'm still staying in Corona Borealis.

So a big thank you to you Steve for providing this superb image of Upsilon Coronae.

I'm definitely keen to observe this triple as soon as possible.

Had this field in view July 5 2020 using a 140 refractor. certainly easy to find as two stars in the 9x50. 200x shows 6 stars despite some high cloud and a near full moon rising