Just getting back into astronomy after almost a 20 year break !!  I scored myself a Celestron 6se off of eBay , with a TON of extra goodies that made the deal add up to quite bargain , I did't plan on getting into photography right away but it was a plan down the road , but there was an unexpected surprise in the box of goodies that came in the box !  A Celestron Neximage ,  I opened it up and it was still sealed in the plastic ,  making my bargain  seem even sweeter .......  Until I used it  ,  and I have to say  I couldn't have been more disappointed in any aspect of its performance . I am no tech slouch and took a tour through all the settings and came to two conclusions , this thing is either fit for a tanerite surprise or I am doing something terribly wrong  , and i can except I am the issue !

My usual course of action is to throw my wallet at a problem until it goes away , but after bruising it getting myself a new setup I might have to approach this with more caution !

I understand my mount sucks for DSO , and in time will fix that , but I want to capture the gas giants with some of the glory i get to see in the eye piece 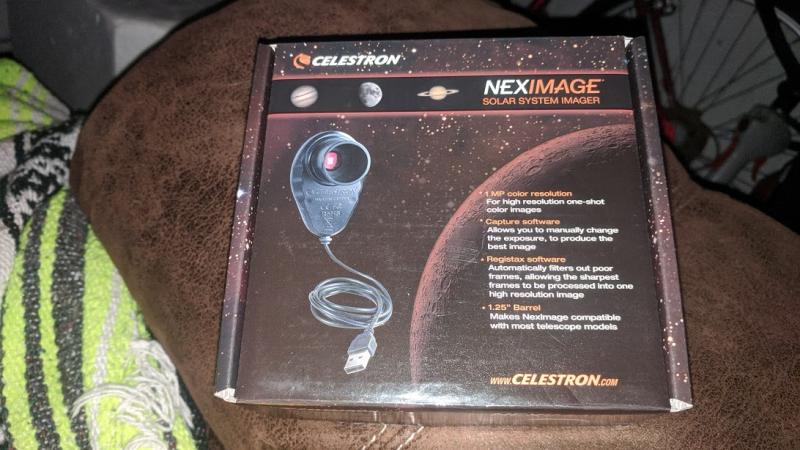 You don't say what you *did* try. Did you see these instructions?

If you don't want to mess with it (and it's probably a rather obsolete camera that's nowhere near state of the art) then:

1) You can use a DSLR. You would take a video. If it's a Canon or Nikon you can use Backyard EOS/Nikon to control the capture and help you focus.

2) You can use a dedicated camera such as the ASI224MC. You would use Sharpcap (free) as capture software.

In both cases, your images would be stacked in AutoStakkert!3, sharpened in Registax, and post-processed if necessary in Gimp or Photoshop.

For best results you'll want a 2X Barlow, and a UV/IR-cut filter. A Bahtinov mask would help with focus (you would first use it to focus on a star, then take it off and slew to your planet).

It came with iCap 2.4  , software that doesn't seem up to the task !    I was using it to capture and view images , but it was so glitchy I knew I was spinning my wheels with it .  SharpCap was the next bit of software I used , seem much more capable , but I could never really seem to get my white balance / brightness to settle down .   I will go through these instructions you linked to , they seem to be much much better than the bundled instructions that came with the camera  ! I appreciate the information  !

I will give the ASI224MC a look as well ,  I don't mind starting with something of known quality to know I am at least fighting my own ignorance vs. my ignorance and lacking gear !   Ignorance can be remedied !

I think theose Neximage cameras tried to do a lot of the general stuff for you, and when they came out imaging was way less advanced then now.

Someone one somewhere likely decided on what was a good idea and had it implimented, just a good idea 15 years ago is not a good idea now. And the interface will have moved on. Simple example is a serial port was 9600 and 19200 if you were lucky, now it is USB2 and more often USB3 way way faster and basically incompatible - both serial.

Suggest you put it to one side and look at the newer camera options, then look a bit into how the Neximage camera functions - some cameras would determine just good frames and display or stack those. Back to who decided what was a good frame? And how good.