Most mass-produced Newtonians have terrible adjustment finesse on the folding flats. Yours sounds like one of them.    Tom

Mine are snug. Yes, it can be difficult to adjust the primary if the screws are tight. I might suggest another method of using the secondary screws so they work together rather than against each other. We tend to tilt the secondary like we do the primary mirror by adjusting the three screws independently of each other. You can adjust tilt by tightening one screw, then loosening the other two by turning them slightly in the opposite direction by the same amount.

Below are a couple of illustrations. It makes collimation so much easier when you can approach the primary center (mostly) from a single direction instead of three different directions. You can do this with a laser, too. The principle is the same as with a cross hair. If needed, small amounts of orthogonal tilt are okay. If you miss the primary center mark by tilting along the focuser/secondary major axis, back that screw off to slightly adjust rotation, then tighten that screw again until you nail the cross hair in the center. Or use a tiny bit of orthogonal tilt to nail it. 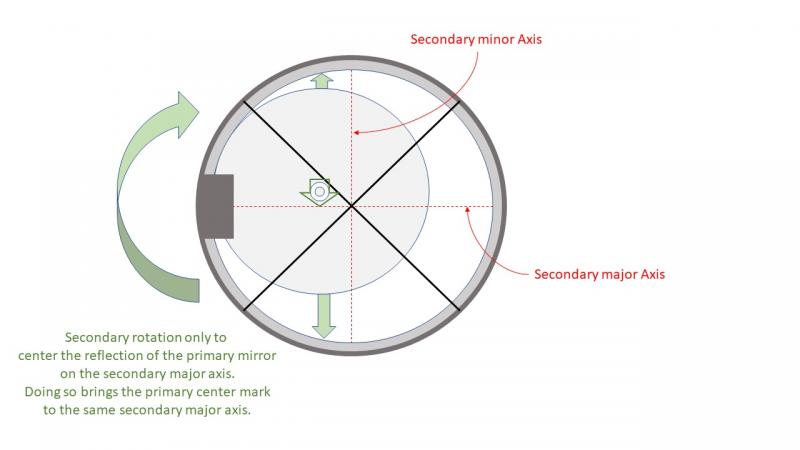 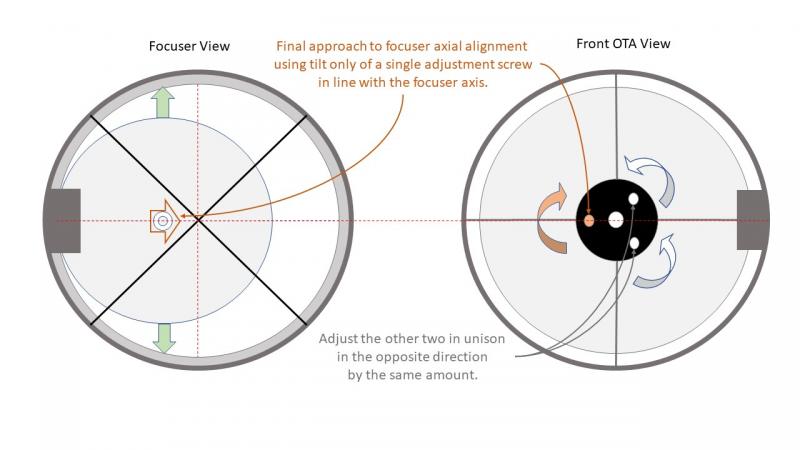 Remember, I’m not one of the experts in this area though.

Remember, I’m not one of the experts in this area though.

Sounds reasonable Jack. I’ll go with that. Thanks for the input.

If you are constantly tightening the adjustment screws trying to tilt the secondary, of course they can become excessively tight and we lose some ability to tilt the secondary. You'll need to loosen one or two of them a tiny bit to allow the tilt from the third screw. You kind of walk the tilt into place that way. If you're lucky, the final turn of the last screw will ensure the secondary is snug.

The centre bolt is used to set the vertical position along the OTA axis as well as the rotation of the secondary in relation to the focuser axis. Once you have done that you can lock it in place and then use just the 3 or 4 collimating screws to adjust the tilt of the secondary to align the reflected focuser axis with the centre mark of the primary mirror.

Then align the primary using two of the three collimation screws under the primary...

I don't use Bob's Knobs, to me it much easier and more precise to use an Allen key for those adjustments.  Bobs Knobs might be fine for small secondaries but mine weighs about 1200 grams so  the collimation screws need to be tight.....

Thanks to ALL who replied. Every reply is beneficial to me.

I tried Bob's knobs, but went back to an allen wrench on my small secondaries. I could never get the knobs tight enough to suit me.

My secondary bobs knobs are pretty snug.  Not too tight where its almost impossible to turn but snug so the mirror stays collimated but I can still adjust when necessary.  If that makes sense?!