No more more unprocessed data! Finally I my processing was able to catch up automated image capturing

This is second time when I processed data in HST palette. I couldn’t decide which version I like more, so I publish both. Which version do you think is better? Thanks for looking, hope you enjoy it. C & C are welcome as always. 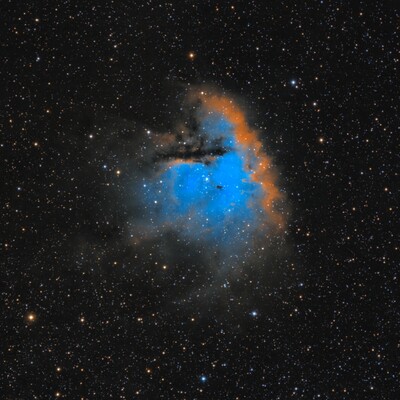 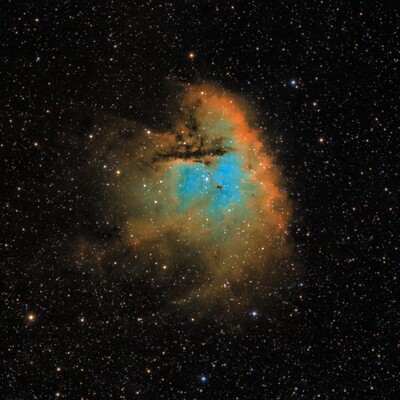 NGC 281, IC 11 or Sh2-184 is a bright emission nebula and part of an H II region in the northern constellation of Cassiopeia and is part of the Milky Way's Perseus Spiral Arm. This 20×30 arcmin sized nebulosity is also associated with open cluster IC 1590, several Bok globules and the multiple star, B 1. It collectively forms Sh2-184, spanning over a larger area of 40 arcmin. Colloquially, NGC 281 is also known as the Pacman Nebula for its resemblance to the video game character.

Edward Emerson Barnard discovered the nebula in August 1883, describing it as "a large faint nebula, very diffuse." Multiple star 'B 1' or β 1 was later discovered by S. W. Burnham, whose bright component is identified as the highly luminous O6 spectral class star, HD 5005 or HIP 4121. It consists of an 8th-magnitude primary with four companions at distances between 1.4 and 15.7 arcsec. There has been no appreciable change in this quintuple system since the first measures were made in 1875.
© Wikipedia

Both are very nice.  The second one seems to show more detail and faint stuff.

Yes, for second one I pushed Ha a little bit to bring faint stuff.