Looking for help to improve my mount stability to

10 replies to this topic

In more detail, I have an iOPtron iEQ45Pro mount on a 2" tripod base, setting on 3-4 concrete blocks so the tripod does not dig into my driveway and it it higher/easier to look through for polar alignment.

I do a visual polar alignment using the mount and the mount's internal AccuAlign Polar Scope with a Losmandy dovetail and my Canon 5D MKIII and a Canon 600mm lens with a 2x extender for an f8 1200mm lens in place.

I do a 3 star alignment which says, for example, that  I am  40' 41" low and 1' 18" west.  This is not great I know and I would appreciate any suggestions to improving my alignment but it is not my biggest problem (I think).

My biggest problem is the camera/telescope appears to jitter when tracking, in this case M57.

I have attached a picture taken somewhat randomly from the first 90 minutes of a series of 2 minute exposures a couple nights ago.

If I was not polar aligned correctly I would expect to see star trails.  But what I see is star dancing.

I have tightened everything down just hand tight and I still get this kind jitter for a 2 minute exposure.  If I go to 1 minute is it not as bad.

But I don't understand where this jitter could be coming from  - it is clearly a complex motion, not just a star tracking error.  I am not even around the tripod when it is taking these pictures.  Occasionally (3 out of 100 pictures), things are relatively stable giving me a few clean stars.

Basically looking for suggestions on things to check.

Again, the telescope 2" tubes are on concrete blocks on my asphalt driveway with the tripod spreader tight.

The camera and 1200mm of lens is about 13 pounds and mounted with a Losmandy style plate to the iEQ45 Pro.

All the screws are reasonably tight but not over torqued.

Kind of at my wits ends as to what is moving.  Is the tracking on my (used) iEQ45 Pro that bad?  I kind of assume it is me.

thanks for any suggestions

Thanks for the suggestions and to answer questions:

You just using your mounts GOTO for tracking or do you have a guide camera?

Off the top of my head, I'd make sure to rule out the basics.

Is it will balanced in RA and DEC?

Have you tried SharpCap Polar Alignment? If not, go spend 10-11 bucks and buy it

It's polar alignment will get you spot on.

Do you have a guide camera and if so, have you calibrated it?

Jittering means something is not right. Byron is correct if it is not one of his suggestions. Do you check slewing in both axis 90 degrees to each side after setting up and setting 'Zero position" without problems? Check your Clutch screws to make sure they are all equally tight.

One last thing asphalt surfaces tend to be springy at times and it can show up in your imaging if you are moving around while it's capturing. I have noticed it on some of the asphalted areas I image at. Even with my heavy setup.

Try placing three rubber or hard felt furniture pads or disc under each of the concrete blocks as one or more of them may be rocking on you.

With my CEM-60, if I feel movement, the first thing I check is the gear switches(clutch screws) for R/A  and DEC.  I am not sure your iOptron has these but if they are not set tight enough you can get wobble during tracking.  You can use your hands on the mount head and tighten until you feel no movement.

Another thing to try is a weight suspended from the tripod , on the ground, using a black rubber bungie.

A friend of mine uses piano wire tied to his tripod, turnbuckle and a weightlifting weight sitting on the ground . He tightens the wire enough to make tite but not lift the weight . His camera photos are vibration free . I personally would make sure all movements are super smooth with a good cleaning of shafts, gears and clutches. And a relube of quality grease .

Not familiar with the CEM-45 so I would first go with what gipht said.  But  I noticed after I thought of adding weight to the tripod and some sort of vibration pads- your Canon lens.  Do you have it mounted with dual rings or just a single lens foot?  I don't know what you mean by jitter but I  had a Sigma 150-600mm using just the stock foot and encountered various poor performance issues when shooting at 1 1/2 - 2 minutes or longer.  Not all my issues were resolved but a lot were once I got a set of rings (dissimilar sizes, not the 3 point style).

Edit: I'm not happy regarding this on the Sigma lens, but when 'extracted' out over 400mm FL, the barrel had noticeable play in it.  Maybe Canon is better or you already have dual rings, but if you don't I highly recommend.

Second, your mount's RA axis, which tracks the sky as the night goes on -- has errors.  All mounts do, no matter how much they cost.  That error comes from imperfections in the gears, movement of the motors, and yes -- Polar misalignment.  At really short focal lengths, this error (called "periodic error" because it repeats as the gears turn at a regular period) won't be too bad.  At 600mm, it will be visible in your images.  To correct it, you either need to guide the mount (either manually or using a guide scope/guide camera), or record PEC -- periodic error correction -- and store the corrections in the mount.  The former (guiding) is what most people do.

It's quite likely that your mount isn't jiggling (though it's possible), and you're just seeing periodic error, DEC drift from poor Polar alignment, and possibly the effects of bad seeing (where the atmosphere "wiggles," which is what makes stars twinkle).  Two of those things you can control -- periodic error and DEC drift.  Seeing you can't.

Read up on this forum for lots of affordable guiding solutions.  The good news is, if you get a guidscope and guide camera, you can use those along with some nifty software to help dial in your Polar alignment to well under 5'.  Kill two birds with one stone kinda thing!

One debugging technique you might try is to take a few minutes of, say, 30 second subs, and stitch them together as a movie, one second per sub.  It will look something like this:

This clearly shows the periodic error that others have mentioned.

In my case, the answer was to add auto guiding.  It's still not perfect, given that I'm trying to do DSO AP on a mount that was designed for visual use, or at most, planetary imaging, but good enough that I can do fairly well.  Long exposures are great at capturing the sum total of all the little tracking errors that occur while the shutter is open.  The longer the scope, the more it magnifies the target, and the more it magnifies all the little wiggles that occur.  1,200mm is on the long side of typical for what folks use for DSO AP; most is done at about half that.  You might consider dropping the 2x Barlow.  That will speed up the imaging train, allowing you to shorten your exposures, and will also make it a bit less sensitive to some of the smaller wiggles that the rotisserie introduces.  You'll still need an autoguider - we all do, pretty much regardless of the mount.  Between the two, you should be in good shape for imaging tougher targets.

A second thought- Maybe I'm missing it but I don't see any image you attached,  Regardless, I'll simply state- Image Stabilization OFF.

As I would constantly move my Sigma lens between my Nikon and a OLY PL7, and also use the lens for daytime shoots, I had the 'misfortune' of once having the lens image stabilization ON when using with the Nikon. .. I had some horrendous results before I realized it..

I would get your mount off the blocks. Go to a big box home improvement center and get yourself some rubber pavers. One for under each leg. Something like these.

You can buy or build an additional tripod spreader which will help stabilize your tripod. 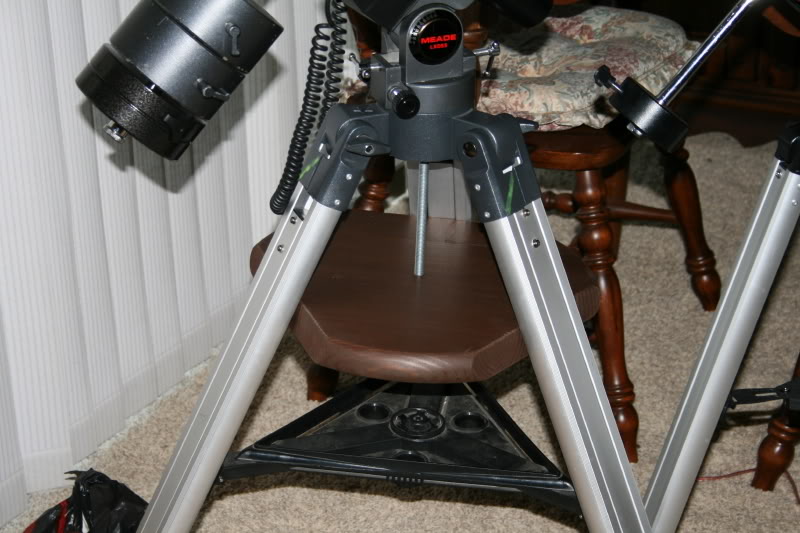 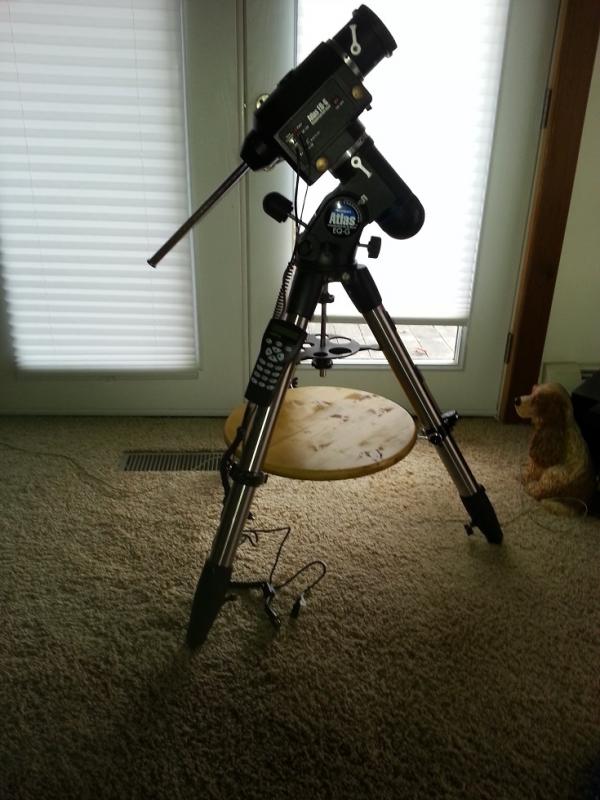 I would get your mount off the blocks. Go to a big box home improvement center and get yourself some rubber pavers. One for under each leg. Something like these.

Excellent ..  just happens to be exactly what I was looking for (for use when I go to our local soccer field)