I just want to photograph the moon

I have a Celestron Evolution 6.  It is alt/az mount not a GEM.  I just want to photograph the moon and maybe sometimes Jupiter and Saturn.  May someone recommend a camera?  I need at least 1900x1200 resolution so I can use the images as computer screen savers.  I want something better than an iPhone but I don't want to spend more than $1k.  Suggestions and advice please.

Moving to Solar System for a better fit.

You should know that you can resample your image to increase its pixel count if you want to use it as a screen saver.

Note that if you wish to image DSO, you should opt for a cooled camera. I took you at your word that you *meant* lunar/planetary.

As mentioned above, there are many cameras for under $1k, most under half that, that will do what you are looking for.

I use the baby of the bunch of those cameras the ZWO ASI120MC-S which has a resolution of 1280x960 and have been making some decent photos for a couple years now.  These capture an .avi video of the object you are imaging then you use a stacking software such as AutoStakkert!3 to combine the best of those individual frames into a high resolution image.  SharpCap or FireCapture are good programs for control of the camera and capture of the video.  All of these programs are free, and if you use the GIMP for adjusting color brightness and contrast then it is all free.  PhotoShop will be more powerful but is not cheap.  Start with the freeware and if you really get the bug then move on to the paid software if you find the need.

If you use this site http://astronomy.too.../field_of_view/ you can enter in your scope, and choose different cameras and see what the image will look like.  With the C6 the moon will more than fill the frame of most cameras since it has such a long focal length, but there is also software to help you take several images and stitch them together to make a mosaic image of the full disk.

I started with a simple $35 webcam that I stripped off the case and mounted in a piece of pvc pipe the same diameter as an eyepiece and used some generic software to capture the video.  It wasn't great, but it got me hooked

I have a Celestron Evolution 6.  It is alt/az mount not a GEM.  I just want to photograph the moon and maybe sometimes Jupiter and Saturn.  May someone recommend a camera?  I need at least 1900x1200 resolution so I can use the images as computer screen savers.  I want something better than an iPhone but I don't want to spend more than $1k.  Suggestions and advice please.

I would look at a ZWO ASI183MC (color, 2.4um pixels, good sensivity). It will give you a 1" sensor for a good wide FOV on your native focal length and it will sample well at F10 with your native scope's focal-ratio. You will be able to easily capture the moon in any phase and you can image planets with a reduced FOV (a region of interest) to speed up the FPS.

If you want to image the moon to make a background/screen saver image, it might be easiest to use a DSLR with an adapter to mount it on the scope as a prime focus camera. This will give you great images of the moon. For the planets, I'd recommend getting an eyepiece projection adapter to give you a larger planetary image with a lot more difficulty focusing. To get a good planetary image, you'll need to take a video (30-60 seconds) of the planet and use software to select the best frames and combine them into an image. If you have a Canon DSLR (except the newest ones), look at downloading the now free ImagesPlus and IPCC from Mike Unsold's web site. The CC module can take videos that the image processing program can reduce to a single image.

Do an Amazon search for "T thread camera telescope adapter" to see some of the adapters available. They range in price from $17 to $60 or more.

To focus a camera when using eyepiece projection, get or make a Bahtinov mask for your scope and use it by focusing on a bright star before targeting the planet you want to image. There's an online generator at:

Hi there, I started with a Celestron Evolution 6" (although I recently upgraded it to a 9.25"). I started with a Canon 700D DSLR (T5i in the US) which was pretty good for both the moon and the planets. The problem with wanting to do both is that the moon is big - very big, and the planets are small - very small. A Canon DSLR can do both of these really well, but other brands (eg Nikon) not as well.

Note that I have since purchased a dedicated planetary camera, the ASI224MC, which gives me better quality images for the planets (and the moon), but because the sensor is a lot smaller you need to take multiple shots of the moon and stitch them together to make up the full disc. Note that the small sensor allows you to take incredibly detailed shots of the moon. The ASI224MC costs about US$250, but there is a new camera that has just been released which looks even better, the ASI462MC for just $50 more.

There are going to be some differences in opinion here.

First, while a DSLR can take good planetary and lunar images you'll do much better with a dedicated astro camera that can record high-frame-rate, streaming video in a RAW format. Plus, as has been mentioned earlier these types of cameras are NOT very expensive and are well within the OP's stated budget.

So, once you've advanced to using a dedicated astro camera (or dedicated planetary camera) note the following:

If you need or want higher magnifications use a barlow and not eyepiece projection. While the latter will work that form of imaging is rarely used by advanced planetary imagers.

Also, don't focus using a Bahtinov mask since with a dedicated astro camera you can focus in realtime directly on the moon or planet itself.

As for cameras, there are lots to choose from and practically all of them will give excellent images. That said, I wouldn't advise getting the ASI183 (Sony IMX183) for the OP's Celestron Evolution 6. Reason being I'm not really sure that scope would adequately cover the full field of the IMX183 sensor. It will illuminate the full field, but the performance off axis with that large of a sensor would likely be compromised and you don't want to try to use a field flattener, reducers/flattener, or coma corrector with any scope when doing planetary work (the fewer lenses the better). Plus, barlows will sometimes struggle to cover even medium sized sensors.

Given the above, you'll probably want to stay with one of the smaller and more "traditional" planetary cameras in the HD range of pixel count. One camera that hasn't yet been mentioned is the IMX178, which is basically a smaller format version of the IMX183 (and less expensive too). But, there are three or four other CMOS cameras that you can get right now that would be equally as good and those have (I think) already been mentioned.

I note, in particular, the requirement for an image 1200 pixels high.

With a small scope (180mm in this case), the largest correctly-sampled image of Jupiter you could possibly capture is going to be 180 pixels from pole to pole.  To scale that up to fill 1200 pixels you'd have to enlarge by a factor of 1200/180 = 6.7x. The resulting image is not going to be visually appealing.

As far as planets go, I don't think you can get there with a small scope.

dalbert02 to give you an idea of the FOV of your scope and some of the "planetary" ZWO scope mentioned use this graphic.

Your scope has a 150mm aperture and a 1500mm focal length. As james7ca mentioned above, your image circle is unknown so whether you will get vignetting is also unknown. 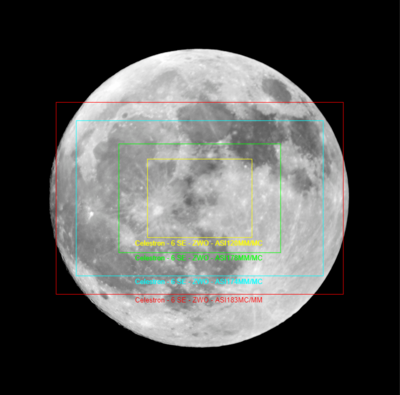 dalbert02 to give you an idea of the FOV of your scope and some of the "planetary" ZWO scope mentioned use this graphic.

Your scope has a 150mm aperture and a 1500mm focal length. As james7ca mentioned above, your image circle is unknown so whether you will get vignetting is also unknown.

That is what you get with the link I posted for Astronomytools, I have been using it to look at which camera I might buy next.  To get a full moon disk with my new AT102ED I would have to use the ASI183MC, but with a C6 it would only capture about 2/3 of the disk.  It is good to play around with that site to see what you can expect when using different cameras with different scopes.

It's worth noting, however, that the graphic showing the field coverage on the moon is only valid for camera comparisons when working at the fixed, native focus of the 6SE. So, if you are imaging at the so-called critical sampling (think highest useful magnification) the relative comparisons between the cameras will be different such that the ASI178 actually has a much larger field than the ASI174. Here is a link to a discussion which covers this behavior when working at equal image scales (you need to review two posts, #23 and #24 to see the graphic comparisons between both cameras):

Also, as I mentioned earlier the OP's Evolution 6 MAY not be able to cover the entire field of the ASI183, so the edges of the image produced with an ASI183 may not be that sharp and thus reducing it's apparent advantage over a smaller sensor like Sony's IMX178 (used in both ZWO's ASI178 and QHY's 5III-178).