Thinking of a Sky-Watcher Esprit 100

It will be used for imaging, as well as visual.

I don't think many will try to talk you out of an Esprit. It's an excellent scope at a reasonable price. Just be aware that Esprits are a little heavy for their size.

The 100 is a well respected ota. About the only thing I have heard some 100 owners say is the need to replace the stock 4" long dove tail with a 6-7" one from ADM to have better balancing capability.

I have the 120, and it's excellent, the 100 has the same type of focuser which I have found better than expected optics are top notch with no false color and tack sharp. Finish is superb. Only criticisms , The dew shield should have 3 bolts to hold it in place with two it rocks around though it does not slip. They need to drill and tap two holes on the flat focuser base to accept auto focuser brackets.

Comes with matched FF (in USA) and a really good locker type case.

I got an Esprit 100 last year after only about 3-4 months of trying AP with my ES ED102CF.  I love the Esprit and it is massively better than the ED102CF, with a MUCH better focuser and better glass (w/o the CA of the ES).

1) the Esprit 100 has a much better way of attaching to a mount, with solid rings and Losmandy rail, instead of the Esprit 80's integrated Vixen foot.  Besides having the more solid Losmandy rail, the rings allow for a much more secure way to a guidescope, e.g. add a small Vixen rail on top and attach the guide scope on top; MUCH better than attaching the guide scope to the small finder bracket.

There doesn't seem to be a lot of discussing the Esprit series in these fora and I would hazard the guess that it's because they do what they're supposed to do.  They get good marks at NEAIC.  The very short focal ratio of the Esprit 80 is striking in comparison to the f/7.7 mainly visual use Vixen ED81s, which I'd venture to say would win hands down as a visual observing instrument. 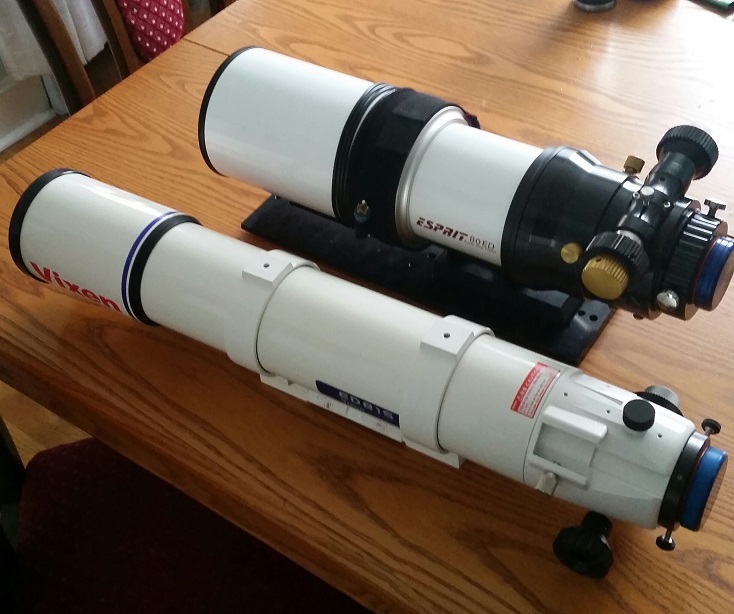