A lot of scattered cloud this morning; and enough to the n’east to deny me that hoped-for comet (C/2020 F3 (NEOWISE)).........Circumpolar here and should have been some 20º following rising Capella but that not seen either.  Of course it did clear there toward sunrise (03:45 UTC) and I was getting Venus then....so in hope for a correct forecast tomorrow.....

Mars: I could see at once some dust-affected albedo changes; so decided it was the time this apparition to get more filter work going.

#29 (Deep Red): can’t say that this showed any particular localized brightness as I might have anticipated.

The assumed SP Cap (as opposed to Hood) looked somewhat leaden apart from a strip along the very dark collar which displayed some pretty obvious scalloping.  So I’m thinking still a fair covering of cloud-mist over much of it.

IL (No Filter): as a prelude to what I say re. the #58 (Green) filter: much of the N Hemisphere was affected by a bluish veil – quite striking.

#58: not sure I’ve ever had such a striking view of, assumed, extensive bright mistiness (esp. N. Hemisphere) with this filter:  also the SPC/H was starkly brilliant.

Normally I would do a separate sketch for any filter views, but given the ‘ebb & flow’ of the clouds I have simply used the same drawing and tinted-in the  filter effects.

With the #58, and only with Mars it seems,  I often see a pale-orange, sort of show-through, of the desert hues and was particularly evident this time.  For e.g. used on Jupiter I see no such show-through of any warmer hues – not even the GRS.  Wondering if others get that effect with the #58???

Venus: Notable was a very small bright spot near the North Cusp. As with Mars did not mess about with too many filters so the view here is the only one attempted...Dave. 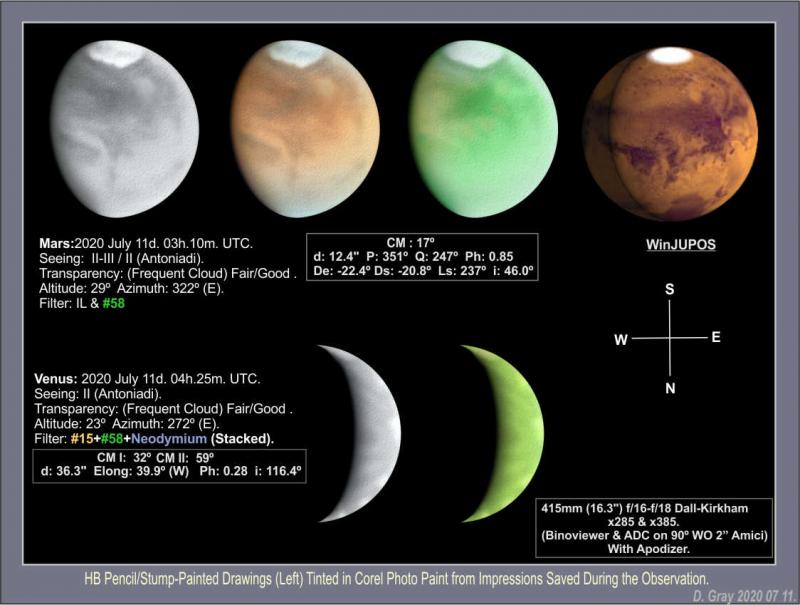 That projection on the edge of the SPC just following the CM is Argenteus Mons, I believe.  Argyre is standing out, too.

Stanislas was saying that Mars has been misty/cloudy but I hadn't seen much (except on 4 July when I saw bluish haze on the northern limb) but my last obs was on 7 July.  I haven't used a green filter on Mars yet this year (mine is a W56), only light red, magenta, and light blue.  With the blue filter (80A) I could see the albedo features and the light orange of the desert regions like you described with your green filter.

I haven't observed Mars since the 7th because I've been eat up with Comet NEOWISE and I must view it the same time as is best for Mars.  Too bad, because the seeing has been really good--but I can't be in two places at once and I have to be away from the observatory to see the comet.

I'll PM you with the latest on my ALPO Japan travail.

I haven't used a green filter on Mars yet this year (mine is a W56), only light red, magenta, and light blue.  With the blue filter (80A) I could see the albedo features and the light orange of the desert regions like you described with your green filter

Weather’s been pretty poor here Michael and my first look at Mars since June 26.

That #58 effect has been noticed ever since I got the filter (by Parks) >20-yrs back but do not think it is a fault or degrading as I had the same experience with the Kodak gelatin version when new. Looking at my old Wratten book I can see there is some overlap into the red side of the curve and also a detached smidgen in the deepest red part.

I also find the #80A lets a deal of the red side through; but with the 58 much more subtle – subliminal even at times.....I know I’m very red-sensitive and could be to do with that........... but why only with Mars is perplexing. Even so it seems to do the job! 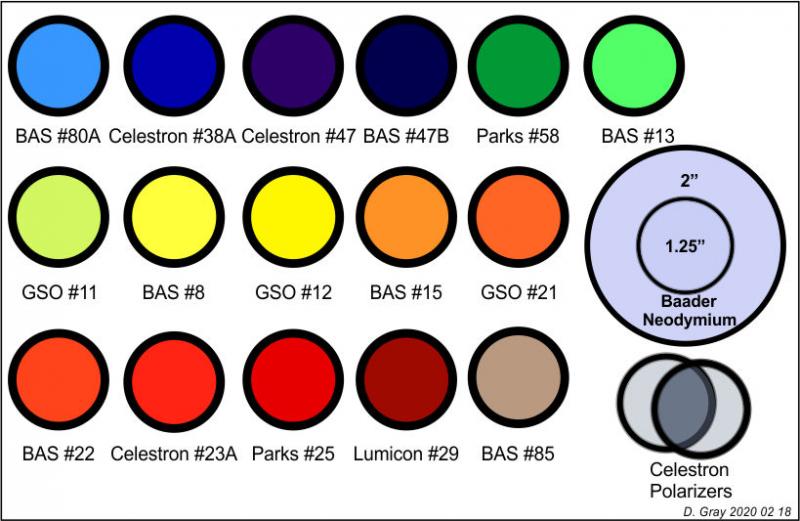 Excellent sketches, especially those with color filter use that help to state the status of the planet.

The misty atmosphere should stay since days for sure.

It should be advised to have a look at the thawing curve of the current cap. It should be noted a thawing speed strong since a week ago, probably more away. The white materials are transfering to the opposite pôle.

I think it's the main topic of the period.

I am still impressed by imagers showing strong hard contrasts on the same period. They should get a visual look before imaging.