Prior to ordering my new Meade LX65 8" ACF from a well-known vendor the other week, I called and ensured that they had scopes in stock and inquired about whether they were the newest production models with the Aux ports of proper polarity. The rep told me he wasn't sure, but that their inventory "had just arrived" from Meade and should be the newest version, whatever it is. When the LX65 landed on my door step yesterday, a check of the battery tray revealed no white marking. Either Meade has abandoned the practice, or I have an early reversed polarity model. I believe I read LX85 models have this issue as well.

I own a voltmeter and even occasionally use it in my automotive hobby, but haven't worked with Aux jacks like this before. Can anyone tell me exactly where I need to apply positive and negative voltmeter leads and what setting the meter needs to be on? Further, what results will tell me whether polarity is correct or reversed? I've seen some of the diagrams indicating what various wires in these connectors do, but am still confused without someone laying out the procedure for me. I tend to regard electricity as voodoo magic!

I've searched high and low on these forums, but can't quite seem to find a guide through this test. I don't have any accessories that would plug in there for the time being, but would like the ports to be functional for future expansion -- after all, I paid for them.

If I do have the reversed ports, I don't have it in my capacity to correct them. Who might I buy an adapting dongle from? Or should I just attempt an exchange with my vendor? I have seen StarGPS's special power cable at $30, but it seems custom designed for their device.

Thanks for any guidance!

Does your voltmeter have a resistance mode?  and if so does it do continuity testing?

If it does, you simply set the meter to continuity mode.

To confirm it is working, touch the 2 probes together and it should beep to indicate a short circuit.

The mount should be unpowered

to see what pins are joined to each other.

As per the diags in the other posts, the +12V and ground pins in both ports are the outermost pins on each side

so its a simple matter to see if they are joined correctly.

Thank you, Andrew. I’ll have a look at my voltmeter and go from there.

As per the diags in the other posts, the +12V and ground pins in both ports are the outermost pins on each side

so its a simple matter to see if they are joined correctly.

Ok, so my voltmeter does have a continuity setting wherein a tone is heard when a complete circuit is made.

My voltmeter seems to indicate continuity between the leftmost pin in either Aux port (+12V as indicated on several diagrams on this forum) and the rightmost pin in the single HBX port (ground). I hear the tone and get a reading of 0.00 or very close to it in each, instead of the '1' that indicates no continuity/open circuit.

I also get continuity going from the HBX leftmost pin (+12V) to either of the Aux rightmost pins (ground).

Does this suggest that my Aux ports have the proper polarity? If they didn't, the Aux +12V and ground pins would be swapped side to side is the way I understand it?

Hope this is all clear and thank you for the help.

It sounds like yours are reversed. ( And that agrees with no white dot )

To clarify it a bit better, i have attached a piccy of how it "should" be wired if correct 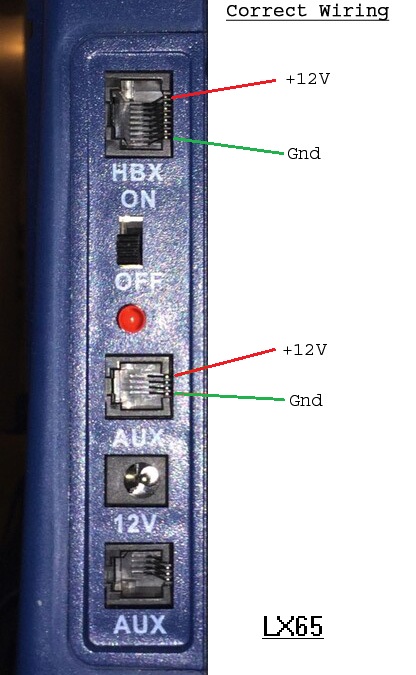 It should be fairly easy to make a patch cable that swaps the lines.

A patch cable is easy enough to make, but if i had a dud LX65,

I "think" that effectively inverts the port as well

Well, that’s bad news. I’ll be calling the shop tomorrow to see if they can swap me or offer another solution. Failing that, I guess I’ll need to look into a patch cable or this “inverted” socket. Some kind of adapter is best, as I don’t want to destroy my warranty.

And thank you all for your help, very much!


Also tagged with one or more of these keywords: catadioptric, Meade, SCT