Started by Bobtownbuck , Yesterday, 08:10 AM
7 replies to this topic

Hi everyone, I have the Celestron power tank 12v/10amp d.c. output. When I finally go out to the field, I will want to power my laptop. It is a Dell Inspiron 15/5000 series. I looked at different at different places and get mixed results, yes it works, no it won't work. And volts are enough, or not enough, conflicting results. If I can, what converter or plug would I need? If not, recommendations, please. Thank you for your help and response...

I have a converter that uses a cigarette lighter input and puts out a 220V plug. This is a less than ideal solution, because you lose quite a bit of power when transforming 12V to 220V and then 220V back to what, 18V? There are special converters that skip the entire up/down process, not sure if they exist for your laptop.

Another issue is your power tank, from what I've seen they come at 7Ah or 17Ah, both isn't exactly a lot and won't deliver power for a long time.

It will work, but not for very long, especially if you are powering other devices.  Your laptop runs at 45W-65W nominal, depending on state of laptop battery charge, display brightness, etc.

To get the most out of the power tank, try these things:

1)  Buy a DC/DC car charger that is much more efficient than your laptop's AC power supply with inverter.

2)  Make sure your laptop battery is fully charged and remove the battery if you can once it is discharged to save power.

3)  Keep your display as dim as possible

4) Disable WiFi if you don't need it.

I actually have 3 tanks. One for my mount, one for dew heater, and one for laptop but wasn't sure the conversion. Thnx for the help

A '12V' vehicle is actually usually running at 14V.  So many '12V' accessories don't really run well at only 12V.  For me, my mount, dew heater, and laptop, all started complaining at less than about 12.2V.

So, having admitted to being an engineer, I did what any engineer would do.  I crafted an overkill solution.  In the end it was a nearly $600 overkill but it just works and the only thing I worry about is lifting it.

The heart of the issue is solved by a variable voltage to settable voltage battery booster from the Ham Radio world.

Others in this forum have decried that this solution is inefficient, they might pop up again here.  They may be right, but I've run the system 5+ hours for two nights in a row without recharging in the middle.  I had more than enough juice.  At the end of the second night the battery was at 11.9V but none of my components knew that, they saw 14V constantly for two nights and were happy. 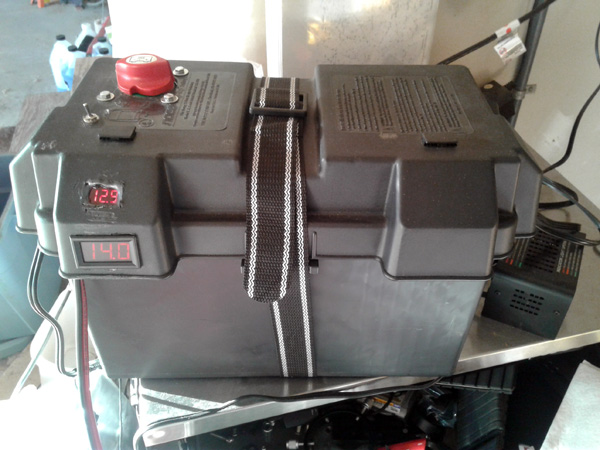 I have two volt meters, one connected to the battery, on connected to the output to remind myself if it's 'on'.  Battery disconnect switch, a built in Deltran compatible charge port, and an 'expansion' port to build and connect another battery in parallel if I need to.  The battery is a 92 ah AGM.  I purchased a larger than required battery box and mounted the booster inside the box next to the battery.  It's hard to see but it's the 'TGE' letters on the left side. 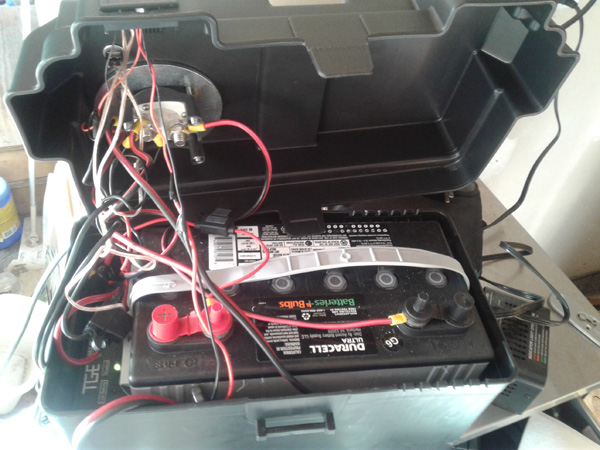 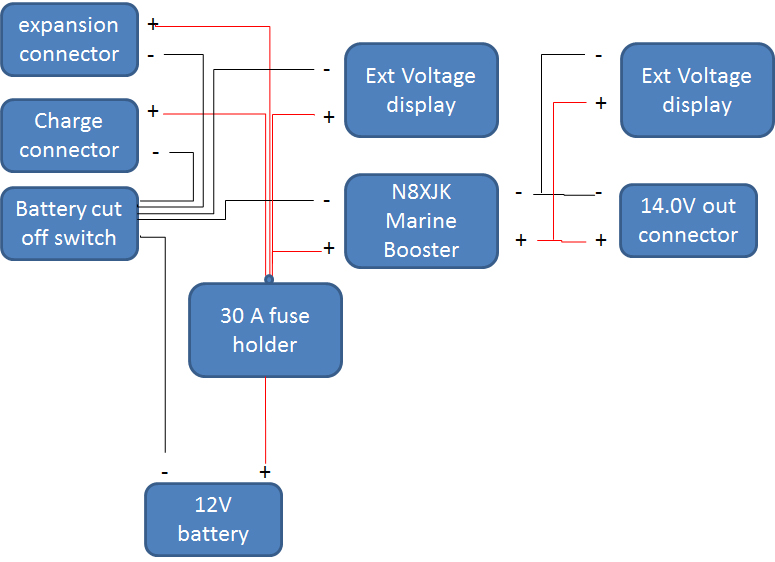 **EDIT** - link appears to be dead, there is a similar product, claimed to be based off the same design - search for N8XJK Booster.  Can't vouch for that one, I have the original.

I use two deep cycle batteries 100 ah each. One for the laptop and the other for the rig. No problems getting a whole night of power.

I have the 12v 7AH PowerTank, which is not enough for a long session with everything turned on.  But it's pretty handy during setup and tear-down because of the red and white lanterns, 12v accessory plugs, etc.  It just needs a bit of help to run the full session reliably, especially in cold weather.

There are a pair of terminals at the back of the Tank, which tie directly to the battery.  What I do is to saddle another AGM pack up to them as part of the setup process, so it picks up most of the overall load, and keeps the PowerTank mostly charged in the process.  That runs the session until tear-down, when the Tank is back on its own.

The saddle AGM pack is actually a set of three 7-8AH AGM bricks wired in parallel that came from my desktop computer's UPS, which decided that they were too old.  So it got a new set, and the old ones (which still hold a charge just fine) became the telescope night pack.  PowerPole connectors are used between the pack and the PowerTank.  If I need more power, I can certainly use a larger AGM battery such as the one pictured by Lakeorion.  But be sure to use batteries with the same chemistry (AGM to AGM), otherwise one of the batteries could end up cooking the other.

The at-mount computing in my case is a Raspberry Pi, so not a lot of load there.  But add in the mount's rotisserie, cameras, and eventually a camera cooler, and it adds up.  I also have a laptop which just runs on its own large-capacity battery.  Since it's just a remote display for the Raspberry Pi, I can turn it off at any time without affecting the real-time operation, and if it dies, I can use my cell phone.