Seeing was less good than last friday, but still very decent to good with mars at 43° high. Solis Lacus would be in plain view and following my mix up of last observation where I took Mare Sirenum for Solis Lacus I was curious to see the real eye.

I'm amazed how low contrast Mars is right now, whereas I used to instantly see the major features I now really have to look hard to see them.

Is there, or has there been a dust storm recently because I haven't been following anything on Mars lately? Or maybe dust deposited from previous opposition's storms?

Anyway the central eye looks less dark than the surrounding parts of the ring to me.

The disk looked split in two with a darker top half and brighter bottom half. within the darker south hemisphere Argyre at 11 o clock and Chryse (in the North) looked like brighter patches of dessert, and also Tharsis was a bit brighter than it's immediate surroundings.

I *think* I saw the polar cap as a bit irregular in shape,  but no detachments or anything.

Even though seeing was less than last time I already felt able to eek out more detail with this second observation, looking forward to the syrtis major side! 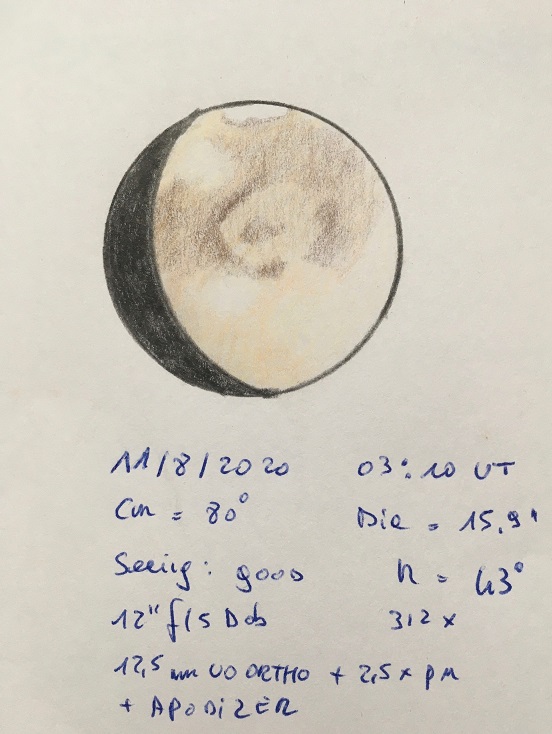 You may be interested in this image taken 29 mins before your sketch, at 0251UT,  from the UK. I have applied a little gamma stretch to bring up the disk in the first one as I dont like to saturate the ice caps. 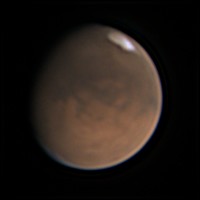 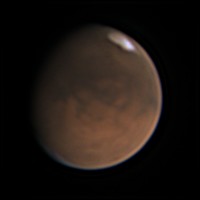 I agree that the contrast was low visually. I suppose its not the most contrasty side of Mars, though I love the volcanoes of Tharsis.

This is a very fine sketch. With decent seeing as you have done here with your sketch, it is possible to eek out detail.

In addition to that, I think the big dust storm in 2018 affected the appearance of the Solis Lacus region to a degree.  I've read some reports to that effect.  I haven't seen Solis Lacus yet this year myself but it's coming around for me soon.